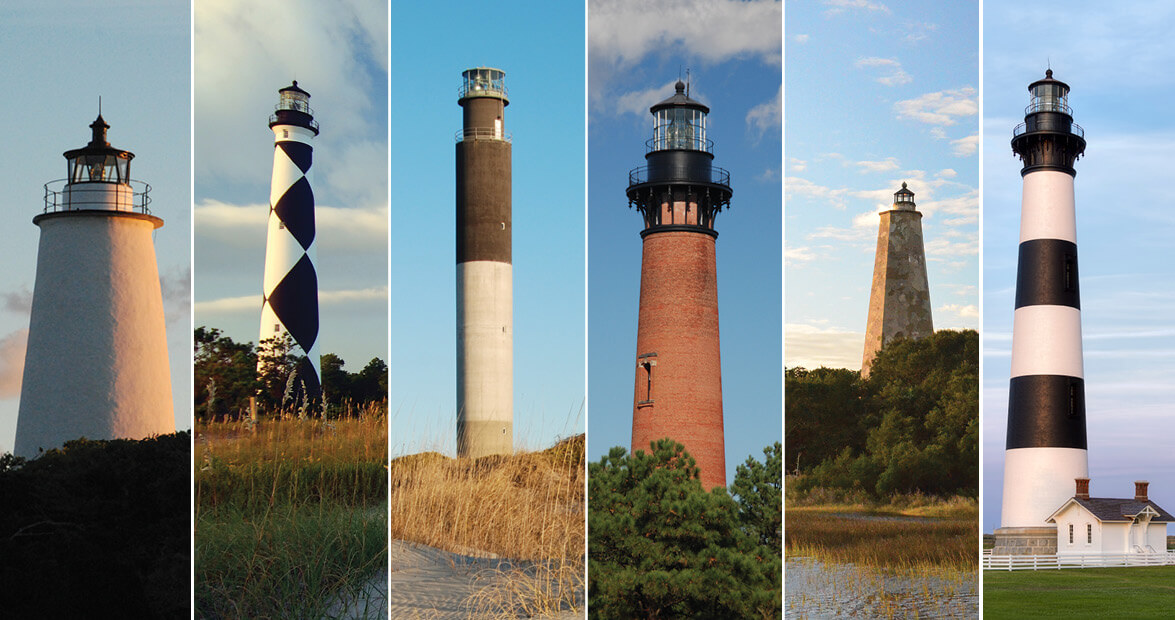 In the beginning, there was a fire on a hill. The fire burned from rocky outcroppings or sandy swales, from the Caribbean to the Caspian Sea, from ancient Thule to the latticework of coastal rivers that poured from the Carolina wilds. These fires were the first lighthouses, blazes built as high as a man could climb. And wherever they burned, out on the margin between land and sea, the meaning of their lights — peril, port, enemy, home — depended entirely on the designs of the men who searched for their flickering above the waves.

It was only a matter of time before the fires were raised as high as a man could build a tower. The first lighthouse known to historians was the Pharos of Alexandria, a 400-foot-tall spire of white marble that rose over the ancient Egyptian port. It was a day-night beacon of the first order. At night, massive fires could be seen for 30 miles. By day, plumes of black smoke rose high above. Considered one of the Seven Wonders of the Ancient World, it stood for nearly 1,600 years until felled by an earthquake in 1375.

More than 400 years later, the first of North Carolina’s lighthouses rose above the dunes — the old Bald Head Light Station, built in 1797 but destined to stand only 16 years. Ever since, lighthouses, lightships, and elevated river lights have come and gone, made necessary by rough seas and dangerous waters, and felled by the same.

Seven historic lighthouses stand on the Tar Heel shore, having survived the ravages of storms, the malignant passing of time, thin maintenance budgets, and the inexorable march of the shorelines themselves.

They still wink and blink, from Currituck Beach and Bodie Island to Cape Hatteras and Ocracoke, Cape Lookout and Oak Island and Bald Head.

Most North Carolina lighthouses fall under the classification of coastal lights, structures built to warn mariners of treacherous shoals lying just offshore. Others are harbor lights, whose presence guides ships to protected bays and moorings. No matter their purpose, our sentinels of the sea include a spate of lighthouse superlatives: the nation’s tallest bright lighthouse and its most recognized, the most recently restored, and an unusual octagonal tower nearly 200 years old.

North Carolina’s oldest standing lighthouse is the venerable Old Baldy. Built in 1817, the Bald Head Island Lighthouse replaced that first of the Carolina lights that rose above the dreaded Frying Pan Shoals in 1797. Squat and octagonal, Old Baldy peers from atop its grove of live oaks, its light accessed by ancient steps of yellow pine. With its stucco walls mottled like the shell of an old loggerhead turtle, the lantern room curiously offset like a hat on a rapper’s head, Old Baldy is a quizzical structure, but it’s still doing its job. Light emanates from the tower, which stands a relatively low 110 feet above sea level.

The next oldest lighthouse along the North Carolina shore, Ocracoke Island Lighthouse, is even shorter than Old Baldy. It rises only 75 feet above Silver Lake Harbor.

Meanwhile, Cape Lookout Lighthouse soars 156 feet above wild dunes and maritime forests. Lit on November 1, 1859, the brick tower received its distinctive black-and-white checkered pattern in 1873. But those diamonds aren’t just for jaunty looks. When sailors saw the white diamonds, they knew they were sailing east or west. With the black diamonds fully visible, they were assured the ship was sailing north or south. Open to the public in the spring, summer, and early fall, climbing the lighthouse’s 207 steps — equivalent to a 12-story building — brings the visitor to a view of the grand sweep of the southern Outer Banks, Morehead City, Bogue Sound, and beyond.

Visitors can climb the 1875 Currituck Beach Lighthouse, as well, corkscrewing up its 214-step spiral staircase, stepping into the wash of sunlight, a panorama of Currituck Sound and Back Bay and the Virginia Tidewater at your feet. Its million bricks have never been painted, a rarity along the Atlantic shore. But it’s hardly the most famous brick lighthouse. The nation’s tallest brick lighthouse is also its most recognized. The current Cape Hatteras Lighthouse was activated on September 16, 1870. Built a third of a mile from the sea, the Atlantic Ocean advanced to within 150 feet of the lighthouse base by 1930. When the entire lighthouse was lifted and moved in 1999, it captured the imagination of the country.

Climb one of those historic lighthouses today, and you can still imagine the old ways. Stand in the belly of a lighthouse, and close your eyes to the modern exhibits, the fresh paint, the safety rails. Put your hand on the cool brick, and look and listen with your heart. His sailcloth coat is worn and soiled, a sheen of waterproof fish oil glimmering in the low light. He climbs the steps with a lamp in one hand, a pail of whale oil in the other. His children finish chores in the keeper’s quarters below. His wife stirs fish stew in an iron pot on the fire. But the simple charms of family and a full belly will have to wait until he attends to these nightly rites, this ritual that defines the lighthouse keeper’s days.

He takes the steps one at a time, careful not to spill the expensive whale oil. The treads creak with his weight — already they are old, decades old, scuffed with untold boot prints. Inside the tower, he rises through the gloom, through the winds, through the storms that pound on the far side of the bricks. Once atop the crow’s nest of a light tower, he glances down at the cuff of his coat, finds a clean patch of cloth, and polishes a smudge on the reflector. There. That should do it. He pours the oil into the lantern’s reservoir. He trims the wick and carries a flame to the blackened cord. The wick sputters, then catches. And there is light.

One of the bright spots of North Carolina’s maritime heritage is that modern society values our lighthouse history, and citizens have taken great pains to care for our remaining lighthouses. All have been restored, and most are supported by both public funds and private groups formed to see that these lighthouses stand for a few more centuries.

The restoration of a lighthouse is a gigantic public event. For months, passersby watch as scaffolding is built and the tiny figures of workers seem to swarm the structures like ants. Anticipation builds as viewers watch the catwalks coming down, fresh paint gleaming, new life lent to a structure that stands as a totem for a particular coastal culture.

And the Bodie Island Lighthouse isn’t the only historic navigation aid seeing fresh life in North Carolina. Two hundred miles to the southwest, the history of lighthouses on Bald Head Island is being rewritten, as well. In 1958, the old 1903 Cape Fear Lighthouse — a 150-foot iron tower that stood on an island in the mouth of the eponymous river — was demolished as the fresh face of the more powerful Oak Island Lighthouse rose nearby. The 12,000-pound Fresnel lens of the Cape Fear Lighthouse — built 15 feet tall and made of 528 glass prisms — wound up in a Wilmington antiques shop, where the individual prisms were sold as paperweights and knickknacks. In 2009 the Old Baldy Foundation bought what remained of the French-made lens and had it shipped home to Bald Head Island. It’s stored there today, its fragments of the maritime past awaiting restoration, as the Old Baldy Foundation seeks to contact folks who once purchased the Fresnel lens prisms and are willing to donate them for the sake of history. One day the massive lens of the 1903 Cape Fear Lighthouse will be displayed near Old Baldy, shedding light on yet another aspect of North Carolina lighthouse history.

North Carolina’s newest lighthouse is the Oak Island Lighthouse. Completed in 1958, it’s a relative whippersnapper compared to the state’s other standing lights. Built of reinforced concrete, its 11-foot-tall aluminum lantern housing placed by a U.S. Marine Corps helicopter, it might lack a bit of the patina of passing time that charms many lighthouse fans. Mariners searching for the entrance to the Cape Fear River’s shipping channel aren’t looking for charm, however. Giant 25-inch reflectors gather the light of a quartet of 1,000-watt incandescent bulbs and send the beam seaward for four one-second flashes every 10 seconds. Light from the Oak Island Lighthouse can be seen for 19 miles, helping to guide the monstrous container ships that will thread the needle of the Cape Fear shoals, and sidle up to the port of Wilmington with goods from around the world. Some things never change.

Still, lighthouses are no longer the primary means of detecting the edge of land and sea, nor discerning the safest routes through shifting waters. Mariners at sea have a host of more modern navigational aids that chart the shorelines in ever-increasing detail — loran, radar, electronic chart plotters, GPS technology that triangulates position by linking to dozens of satellites thousands of miles overhead. No doubt the wink of a lighthouse is a comfort and a certainty. But a pinprick of light on a distant shore might be viewed as an anachronism when digital displays — not to mention cell phones — can pinpoint a sailor’s location with a precision incomprehensible to the ancient mariners of yore.

But there is something else indisputable and indispensable about lighthouses, and as unchanged as the quickening heartbeat of those who watch their lights arc across dark waters. While we may no longer rely solely on the guidance, certainty, and security of a fire on a hill, we still hunger for what those fires — and whale-oil lamps and Fresnel lenses — spoke of throughout the centuries: Here lies a wild shore, untamed and untrammeled, unknown and perilous. Even today, we still need beaches and shores and shoals ruled by nature alone. We still need precisely what the lighthouse alerted us to: Places dark and mysterious, empty places in need of a brief, searing, telltale beam of light.