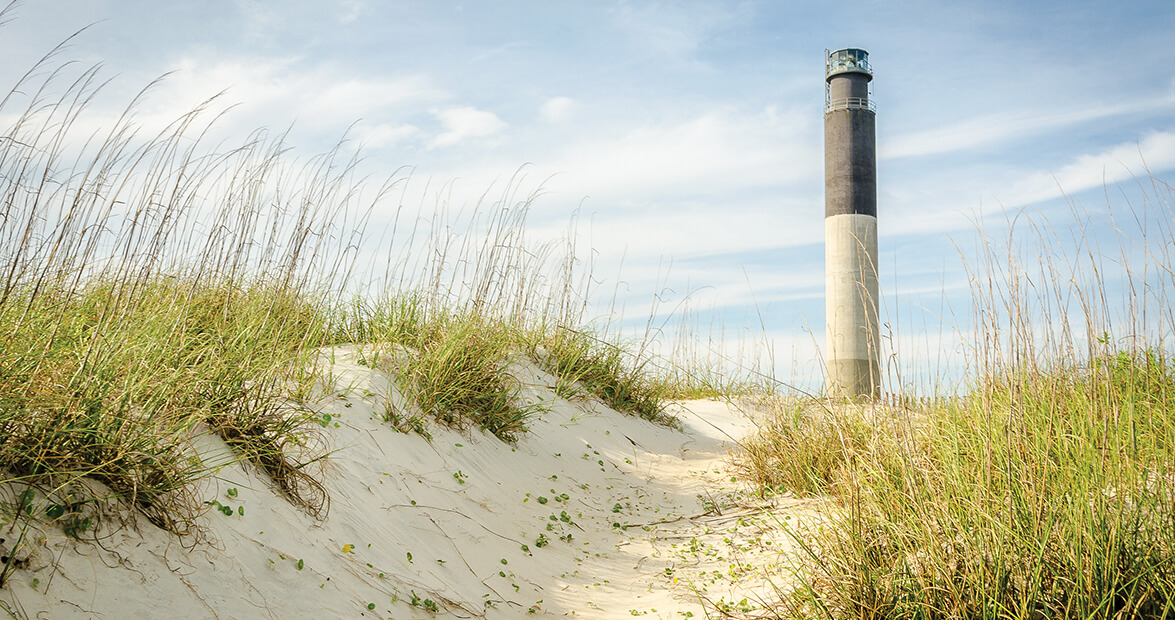 1. In 1958, construction crews built the Oak Island Lighthouse by continuously pouring concrete, raising the tower by a foot every hour. The lighthouse went up in a week. A week. You know how long I’ve been talking about organizing my junk drawer? Months. We could have had at least a dozen new lighthouses in the time I’ve been putzing around.

2. This lighthouse is the last one built in North Carolina, and it has a Cold War look to it. The concrete itself was colored gray, then white, then black at the top, so it never needs painting. The inside looks and echoes like a silo because — wait for it — a silo company built it. There’s no sweeping spiral staircase. Instead, the United States Coast Guard installed steep metal steps and platforms that rise squarely through the center of the lighthouse. This is meant to cut the number of stairs by half, but makes you feel like Jimmy Stewart in Vertigo if you look down.

3. Last year, volunteers decorated the outdoor railing at the top with low-power LED Christmas lights, because the old incandescent ones kept tripping a circuit breaker. To clarify: Christmas lights proved to be too much for a lighthouse. The big searchlights are on a separate line and didn’t go out — they never do — but people got tired of stomping up to the top to turn the teensy little colored ones back on.

4. In July and August, “this is like a chimney,” says Bob Ahlers, a volunteer and tour guide. Near the top, another tour guide, Kathleen Morrison, warns me that the temperature can reach 110 degrees up here, because the black stripe holds in heat. “You’ve never been hot,” she assures me.

5. Bob feeds me numbers at a rapid pace. The lighthouse is 153 feet tall. It sits on pilings that plunge 67 feet into the ground, so it hardly sways. A small halogen bulb and reflectors create a 2.5 million candlepower light. Ships can see it from 16 miles away. The Coast Guard paid $110,000 to build it. Of the more than 15,000 people who tour the lighthouse each year, one in 10 change their mind when climbing and don’t make it to the top. Too scared. Guides often tell nervous people to count the steps as a distraction. The blueprints said there were 134 steps inside, but the counters kept coming up short. Sure enough, when the guides checked, they found only 131 steps. If you know what happened to the other three, call the police.

6. As I trudge up the last of the stairs, I wonder about the tingle in my belly that came when I first saw the Oak Island Lighthouse. As practical things, lighthouses are finished. Ships have GPS. Views from a hundred feet up are about to become even more ubiquitous, thanks to drones. This thing I’m climbing? It does not need to be here anymore. Why am I still drawn to it?

7. The answer is in a book entitled Lighthouses and Lightships of the United States by George R. Putnam: “The lighthouse and the lightship appeal to the interest and better instinct of man because they are symbolic of never-ceasing watchfulness, of steadfast endurance in every exposure, of widespread helpfulness.” That was written in 1917. It’s still true.

8. At the top, I step through a hatch onto the railed-in balcony, looking off toward the Atlantic, Bald Head Island, the Cape Fear River, and, below, the tiny houses on Caswell Beach. As soon as I catch my breath from the climb, the view takes it away again, because that, too, is what lighthouses are supposed to do.