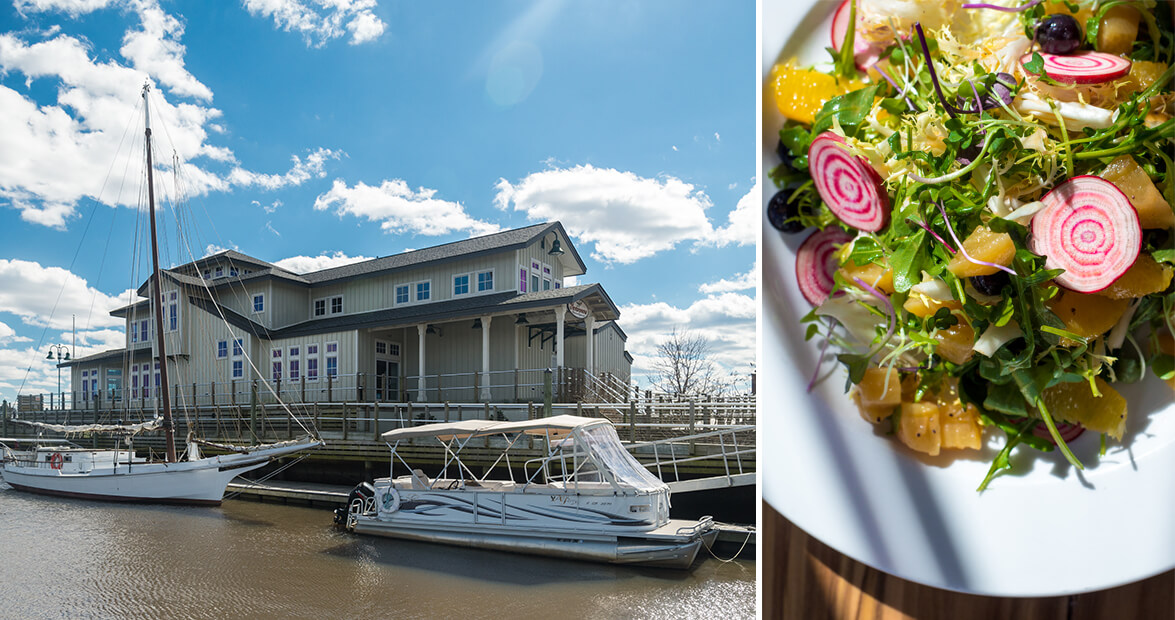 Sure, everybody loves to talk up the fact that oysters make pearls, but the mighty mollusk’s most fascinating attribute is not the shiny, round treasures it yields. The true beauty of an oyster — aside from its meaty, briny flavor we crave — is its ability to filter dozens of gallons of dirty, algae-filled water every day. The oyster proudly makes a home in the mud, gets to work, and sticks to it. North Carolina’s celebrated sounds are made more pristine because of the bivalve.

If there’s something we can learn from the oyster, it’s that great things can come from the mud — even an upscale waterfront restaurant like New Bern’s Persimmons. Before the restaurant’s foundation was laid, part of the Neuse River was dredged to reveal persimmon and red gum logs that lay beneath the water’s surface. Instead of being scrapped, the wood from those trees was salvaged to make Persimmons’ tables, bar, and hostess stand. Six years later, a waste-not, want-not philosophy continues to drive an ever-changing menu at Persimmons that features seasonal ingredients grown close by. 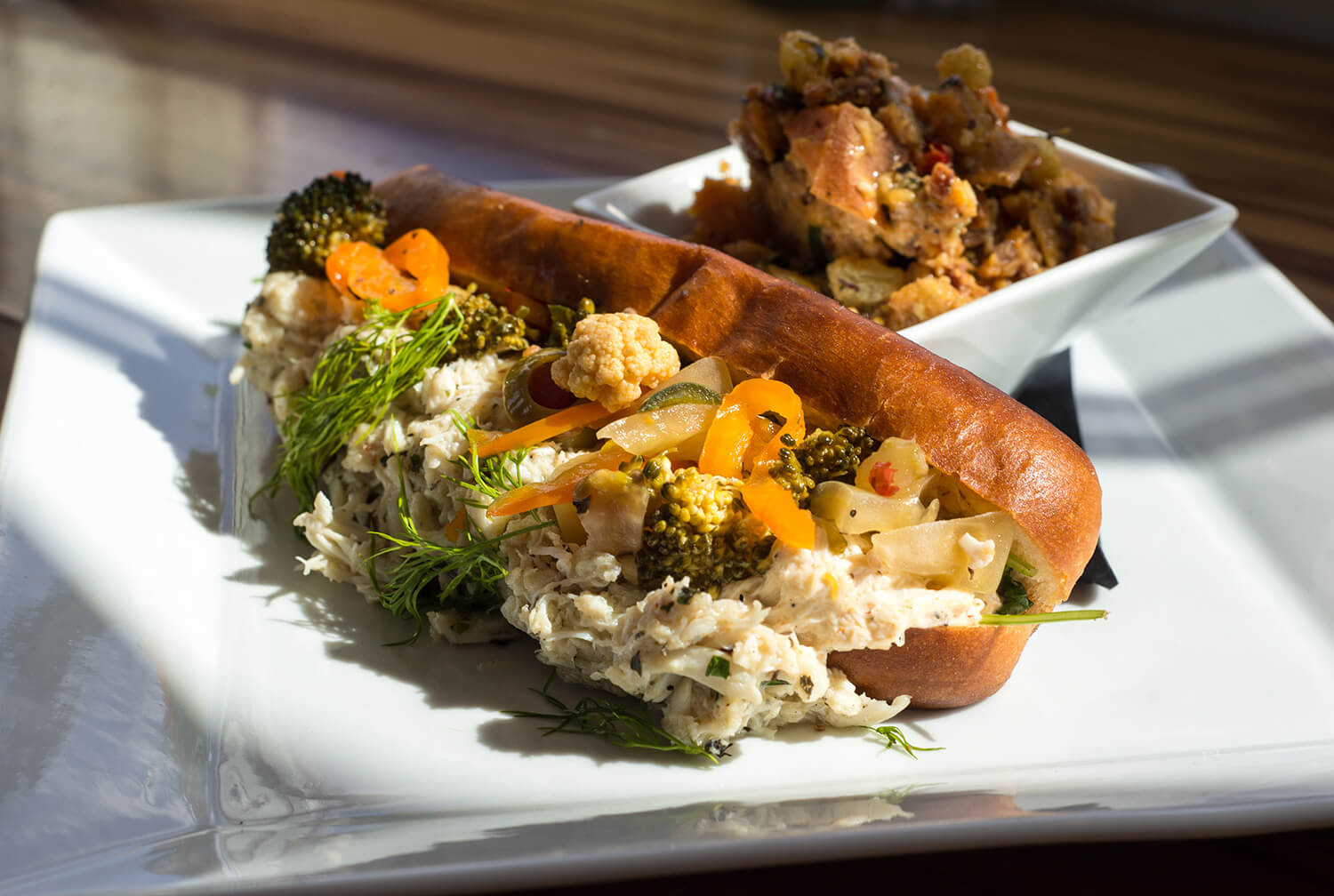 A buttery brioche roll is topped with lump crab, made bright by spiced lemon mayonnaise.

At Persimmons, people are always coming through the door with stuff: your not-quite-garden-variety fiddlehead ferns and morel mushrooms, for instance. The restaurant will gladly take them, but first, chef Antonio Campolio has a few questions.

Persimmons has always showcased local cuisine, but since Campolio joined the restaurant in December, he hopes to strengthen relationships with North Carolina purveyors, growers, and makers.

“We want there to be longevity in the partnerships,” Campolio says. “If we don’t have the long-term commitment set into place, we’re literally taking money away from people’s families.”

That means doing things like taking whole hogs from Nooherooka Natural farm and having the butchery at Weeping Radish turn them into sausages, chops, and bacon that the restaurant can use.

“From beginning to end, that pig on your plate was raised just down the road and processed a little farther than that in the Outer Banks,” Persimmons manager Dean Quadir says.

In addition to fresh seafood like flounder and lump crab, pig is big on the menu here. One of the most popular menu items is the crispy fried pork torta. Made with smoked pork and country ham, the torta’s caramelized red onion jam offers a subtle sweetness that balances out the kick of the chipotle aioli.

Some of Persimmons’ dishes are menu mainstays, and others change seasonally, but all offer comfort and familiarity with a twist, right down to the side dishes. 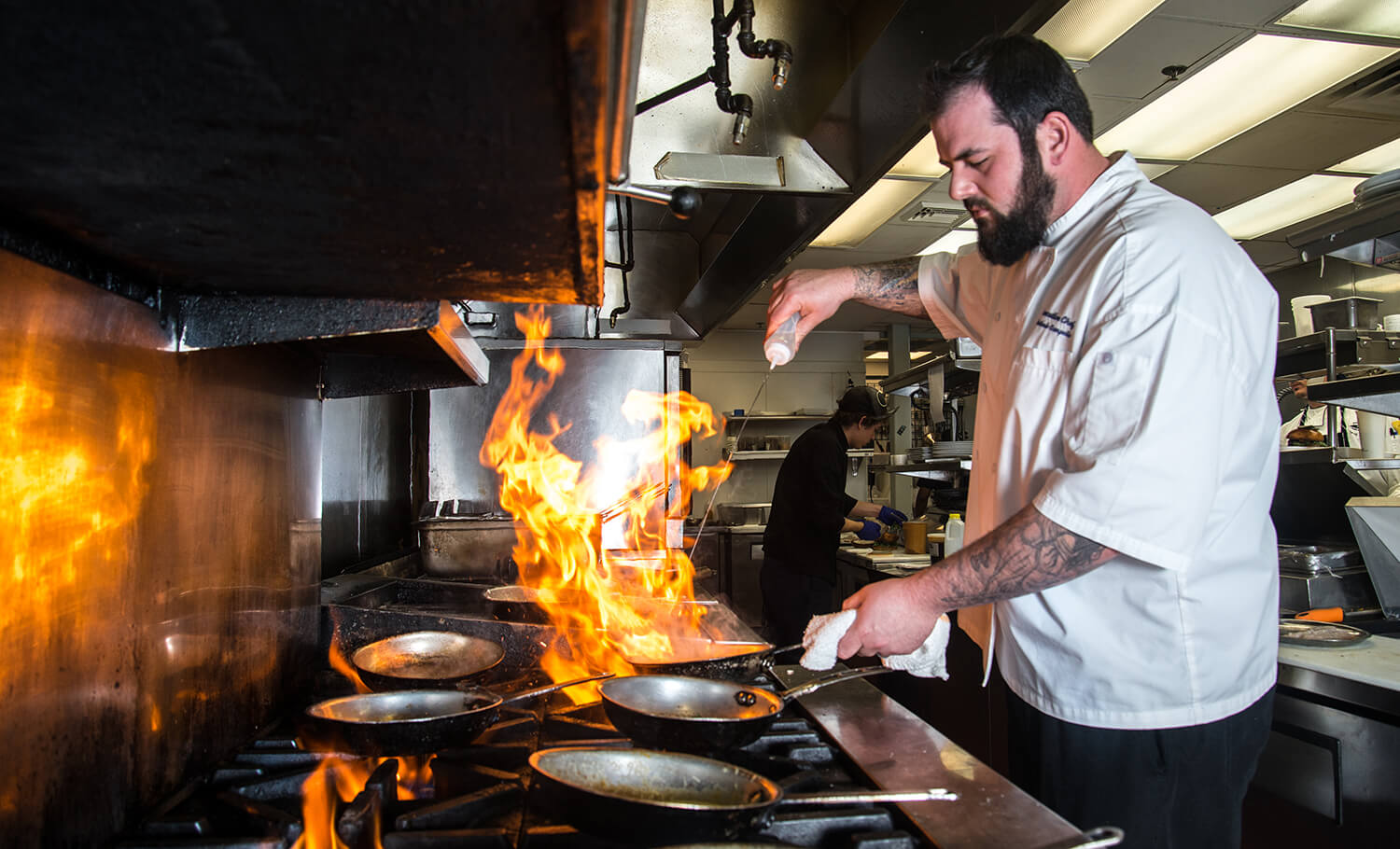 “I want you to be able to recognize [the food] as something you can talk about at home around your dinner table,” Campolio says. “At the same time, I don’t want it to be so simple that people say, ‘Well, my mom made this sweet potato salad last night.’”

Yes, even those fried oysters get a little dressed up around here.

“I love sitting on a deck at a place like this and having great oysters and a cold beer, but if I can have them with this really cool local vinegar and this caramelized local honey and some freshly grated horseradish, it makes it that much cooler for me,” he says. 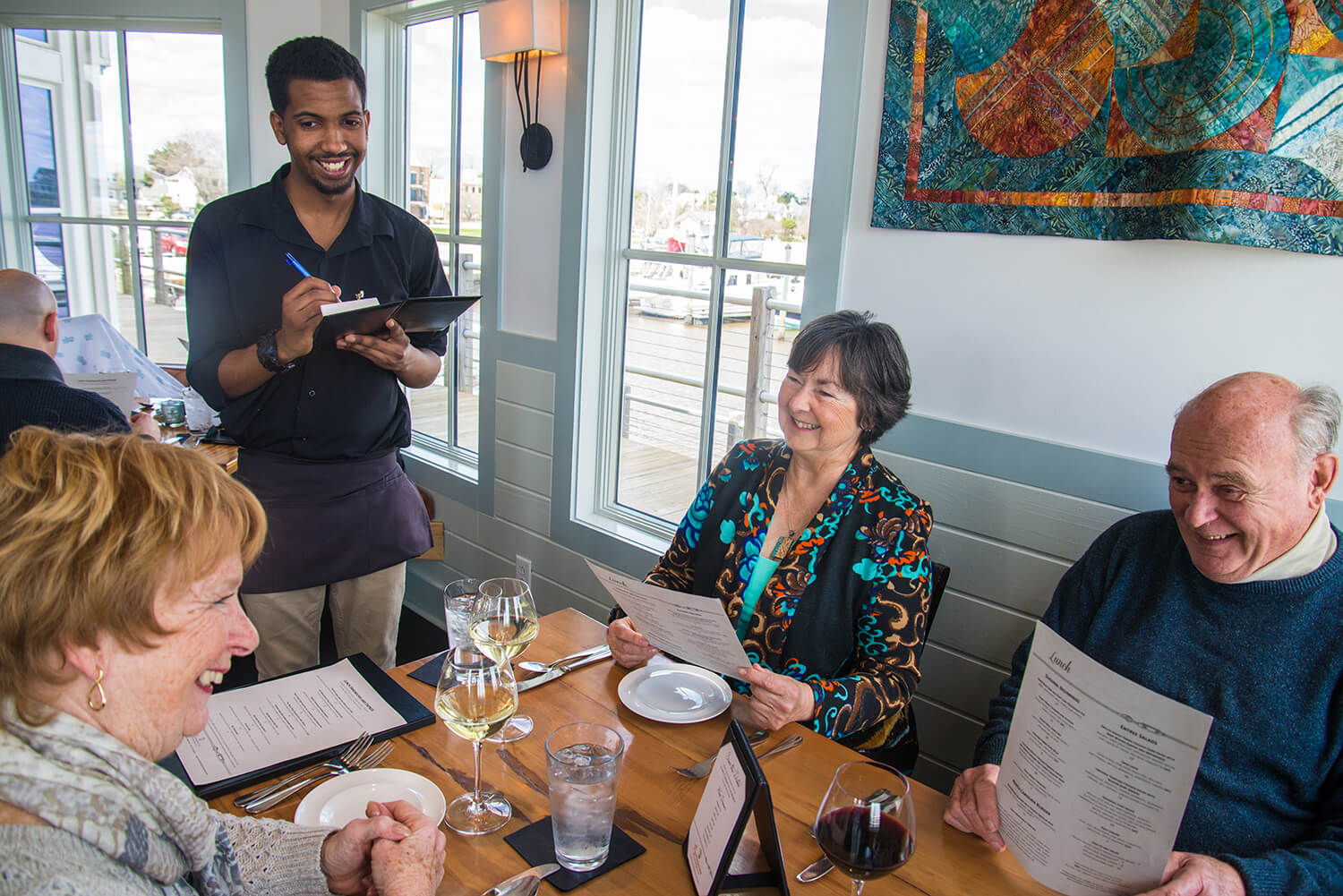 Nautical ambience isn’t hard to come by. Guests can tie up their boats to the adjoining dock before ambling up to the restaurant’s wrap-around deck. On both balmy and brisk days, floor-to-ceiling windows usher in the sunlight along with flecks of New Bern’s charm and warmth.

As much of a travel destination New Bern may be with its old-world allure, the heart of this community beats year-round. What better way to capture its spirit than by celebrating unsung eastern North Carolina foodways and filling up your plate? Now, another round of those oysters, please.

New Bern isn’t short of good eats. Plan a food-focused weekend to the city with these additional dining recommendations.

BAKER’S KITCHEN
Few could pass up a good waffle or stack of pancakes, but at Baker’s Kitchen, these breakfast staples also serve as delivery devices for something the restaurant calls “butter syrup” — but we just like to think of it as liquid gold.

MJ’S RAW BAR & GRILLE
After wandering around downtown, stop by this laid-back, local hangout for lunch. The crab cake sandwich is a crowd favorite and features generous lumps of well-seasoned crabmeat. Wash it down with one of the many North Carolina beers on draft.

THE CHELSEA
Pepsi was born in a pharmacy on the corner of New Bern’s Middle and Pollock streets. The drink’s inventor, Caleb Bradham, had a second drug store just one block over. That old-time building is now home to The Chelsea, which serves “New American” cuisine. Dishes are inspired by the flavors of Germany, Asia, and just about everywhere in between.

247 CRAVEN
With just about a dozen tables, 247 Craven provides an intimate dining experience along with an ever-changing menu. If you’re staying in New Bern for the weekend, squeeze in a little extra time for Sunday brunch here before heading home.