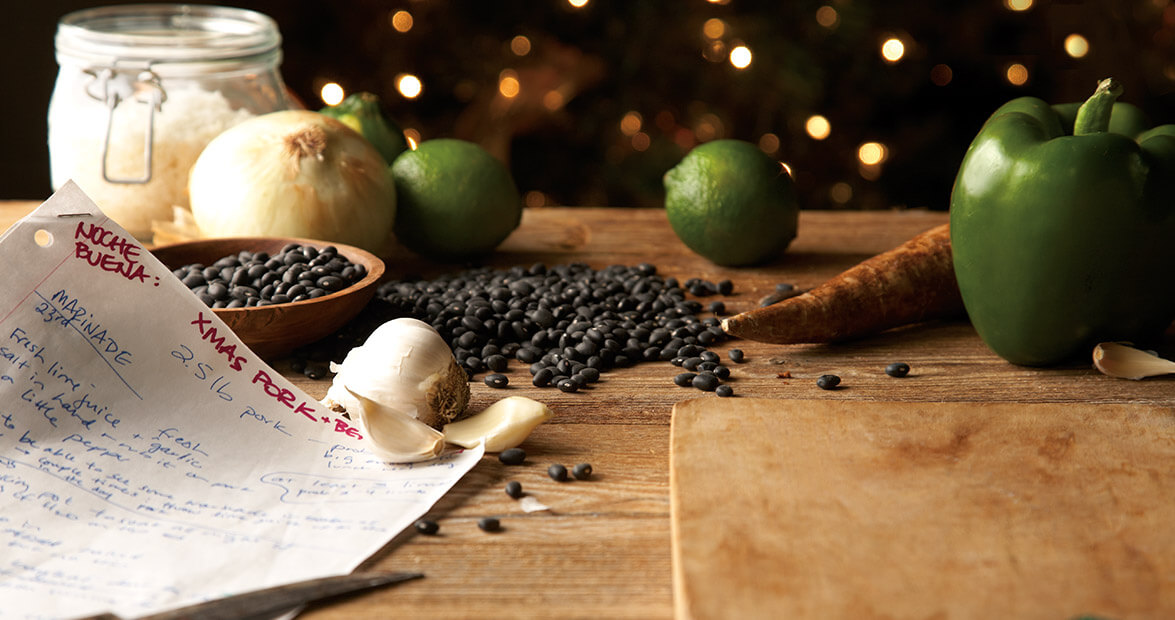 The recipe is in my wife’s handwriting, on ruled paper torn from a spiral-bound notebook.

She writes in a sort of reckless half-cursive that brings back memories of notes we used to leave one another on our windshields. We were students, then teachers. See you after class? Answer yes to that question enough times, and you end up either asking — or answering yes — to another question: Will you marry me?

NOCHE BUENA, it says, in red marker across the top. XMAS PORK + BEANS + YUCCA. My wife is Cuban, raised in Miami, and a North Carolina transplant like so many of us. Start on the 23rd, the recipe says. Soak the beans. Marinate the pork in lime and fresh garlic. Put salt in your hand and rub it on the pork. My wife sat her mother down and made her tell all. “Oh, honey,” her mom said. “You know I don’t know the measurements for anything.”

I grew up mainly Episcopalian. Our big Christmas meal was on Christmas Day. A goose. And later — once my father determined that eating the goose wasn’t worth the grease fire — turkey or beef Wellington. For most of the Latin world, though, the big feast comes on Christmas Eve. In Spanish, Noche Buena. The Cuban version means roast pork and black beans and white rice and yucca, which is a pale, potato-ish thing I thought I hated until I learned that you were meant to serve it smothered with mojo sauce, which is lime and garlic and olive oil and onions sliced thin and semi-pickled in all of that.

After we were married, my wife wanted to talk about which tradition we’d follow. Let’s do both, we decided. It’s perfect. Our kids can celebrate both, with two huge meals. One on the 24th, one on the 25th. I love a feast meal. Two, back to back? I love that more.

And there’s this: the smell of cooking the beans on Christmas Eve morning, of the bay leaf and garlic and ham hock and the sofrito of onions and peppers, the added secret ingredients (a bit of vinegar, a small can of tomato sauce, and sugar — “Barely dip your fingers in the sugar bowl”). All of that is the smell of Christmas for me now. Of the holiday being upon us. It’s also, for me, the smell of being in love.

She is a semi-recovering vegetarian, my wife, though she always ate her mother’s lechon on Christmas Eve. But if your wife is slowly agreeing to eat meat, and if one of the ways she’s agreeing to such a thing is by way of you promising to find the most sustainably and ethically raised animals possible, then you could do far worse than to find your pig at PTB Farm, which sits on 100-plus acres just north of the Rockingham County line.

What I want to say about Worth and Hillary Kimmel, PTB’s owners, is how arrestingly authentic they are — and I don’t mean that I went to a farm and found farmers. What I mean is this: You can hear, in the way they talk about their land, their honest and overreaching respect for living there. “This is our biggest resource,” Worth tells me. We’re standing in the woods, just away from PTB’s sows. “This forest. This pasture.” About the animals — Katahdin sheep and heritage-breed Tamworth pigs being raised without confinement in the forests and fields — Hillary says, “Humane. Happy. Ecological. Ethical.” She says it less like an answer to a question, and more like a chant. I ask if it’s difficult, this life, trying to make a real go of a small-scale farm. “We’re getting better at it,” Worth says. Hillary’s walking away, toward the hose. “Here, pigs,” she says, calling them to water.

Rice is rice, except when it isn’t: Last Christmas, I cooked it to mush, and we had to wait while I nuked an emergency batch in the microwave.

Hillary is 31. Worth is 28, though when he tells me this, Hillary squints and says, “I think you’re 26.” They both went to Warren Wilson College, and both worked the farm there. They’re living in a 1920 farmhouse with no air-conditioning and only a woodstove for heat. On their first date, they mortared the logs of a corncrib, a building Worth was turning into a canning kitchen. They look like extremely famous indie rockers. They have the easy grace of people who are genuinely kind. What you want to ask is if you can live on the farm with them. If they’re maybe taking interns. What you do instead is buy your Christmas roasts, and promise you’ll come find them at one of the weekend farmers markets they frequent in Winston-Salem and Greensboro.

Low and slow is how you want to cook the pork. Same with the beans. The recipe says you want the beans simmering by 10 in the morning. Start the pork around noon. Rice is rice, except when it isn’t: Last Christmas, I cooked it to mush, and we had to wait while I nuked an emergency batch in the microwave. Plate the yucca with the mojo. Scatter everything else around the table, family-style. Raise a glass.

What the recipe doesn’t say: Each and every year, marvel at what’s brought you together, how you met your Cuban wife in graduate school in North Carolina, how many years of dating and not dating it took you to figure out that you were supposed to be married to each other. Remember that this meal serves, each year, as a marker of your exceptional, crazy luck. Think of the dogs and cats and kids you had and have. The family you’re building. A feast meal is meant to be filled with noise, the clatter of spoons and knives. There’s your wife, down at the other end of the table. There’s the rest of the family, some years hers, some years yours. Let’s give the children decent manners for right now. It’s Christmas, after all. But your wife, your best friend, this person who brought this food and so much else into your life — let’s catch her in that moment when she eats the first bite, smiles, nods her head. “This,” she says. She looks at you. “This is almost as good as my mom’s.”