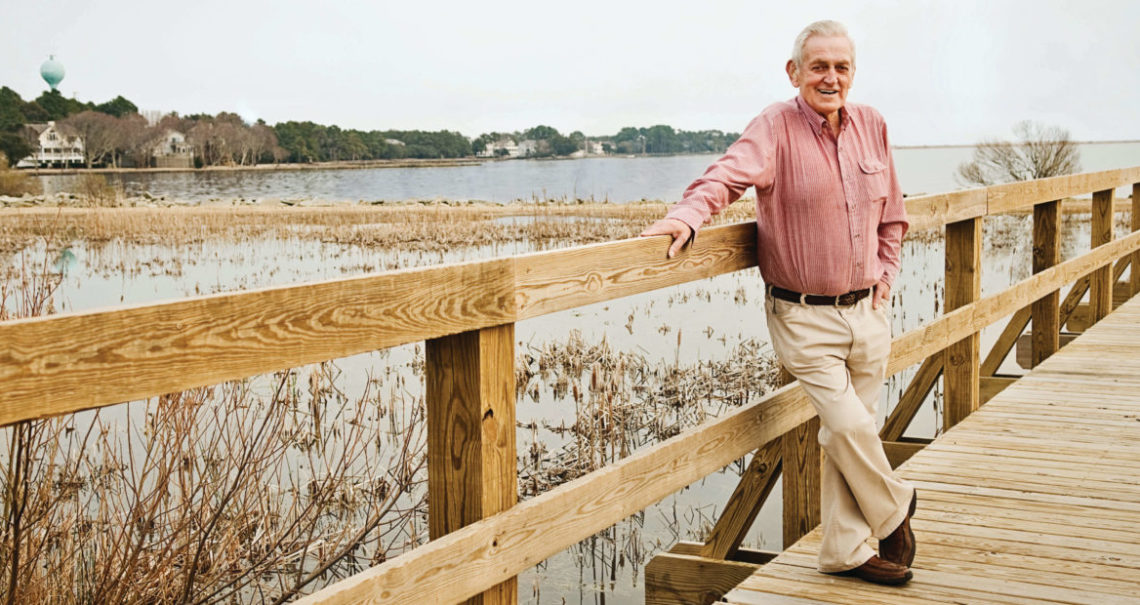 The sun hangs just above the horizon, throwing long shadows against walls and windows. Norris Austin sits by the phone in his apartment above the post office. He checks his watch: 6:55 p.m. Not quite time.

Five minutes later, he dials the number and puts the phone to his ear. He listens for a familiar voice, one he’s heard at least once nearly every day for the past two decades.

The conversation is light. Austin and Bunny Sapp just talked this morning. They talk about the things that filled their day between the phone calls, about doctors appointments and what medications they’re taking.

Often they laugh over memories, like one from the day they met in 1982. Sapp was visiting her sister, who rented a cottage from Austin every summer. He came by to say hello. To get a laugh, Sapp threw a hammock over her head and started singing, “Here Comes the Bride.”

“Very subtle,” she says and laughs.

They swap stories about what’s going on in their neighborhoods; Austin’s in Corolla, and Sapp’s in Jacksonville, Florida.
Because, although Austin soon fell in love with Bunny’s sense of humor, and even came close to proposing to her, he recognized her affection for Corolla would never be strong enough to moor her here.

“She never thought of it as a permanent home,” he says. “Once she made that clear to me, I knew I’d be getting myself into a lot of trouble if I went forward with it.”

Because his love of Corolla would never let him leave.

Snow and rain pelted the windows, but Austin had no idea on that late winter day in 1962 that one of the worst nor’easters ever to hit the East Coast was bearing down on the Outer Banks. Curious as to why the post office and his family’s general store had so few customers, he decided to walk over to the beach on his lunch hour to see what was up.

“You could hardly look at the ocean, there was so much fury,” he says. “I had been standing on one dune, and when I looked back over my shoulder, the dune had dissolved, just like sugar.”

The village of Corolla dodged the full force of the infamous Ash Wednesday Storm, but Austin remembers the state of things he found in its wake. Oceanfront dunes were swiped flat, and clams, bigger than the palm of a man’s hand, plastered the beach. “And the conch shells were just piled up on top of one another,” he says.

By the time he lived through the legendary storm, Austin was seldom fazed by Corolla’s vagaries. A seventh-generation Banker, he left home just long enough to discover that this stretch of sand is where he belongs. After high school, he went to business college in Norfolk, Virginia. But four years later, he resigned from his job as an FBI fingerprint clerk in Washington, D.C., and returned to the land that had shaped him.

Corolla was a wild place during Austin’s childhood, and he ran with a tight group of friends. Less than 50 children attended the town’s two-room school; Austin was the only student in his senior class. Television wouldn’t reach Corolla until around 1955. All the kids had were each other and wide open spaces. Adventure was everywhere.

In between chores, Austin spent summers plying Currituck sound in a sailboat his father made, exploring islands, and ignoring his parents’ words of caution. “A few [of the islands] had Indian burial grounds,” he says. “I was always told not to go into the burial grounds because my parents believed in letting the bones rest.”

Austin admits to hiding more than a few arrowheads, but a stronger draw still was the element of surprise the sandy shores promised every single day. Austin and his friends spent hours combing beaches studded with booty.

Sometimes it was fruit — oranges and bananas that ships had tossed overboard on their way into port, Austin says. Sometimes it was cigarettes, Lucky Strikes and Camels filched from K-rations tossed from Navy ships.

Sometimes it was a body; Austin has found two of them in his lifetime, the first when he was 13. One was a pilot who had fallen overboard. The other was a man who was never identified.

As frightening as those finds were, Austin never tired of walking the shores. He also spent hours up at Callie Parker Store on Corolla’s main road. There, the town’s menfolk would gather in the evenings after supper. They told stories, about their families, about what they did for a living, about their ancestors, about what it was like when so-and-so was here and when cows and pigs outnumbered the people out here. Austin sat spellbound, absorbing his hometown’s story.

By the time Austin met Bunny Sapp, he had been postmaster of Corolla for 23 years. He succeeded his father, John, in the post and had eventually taken over the family store in the same building. Moving back and forth between post office boxes and produce bins, Austin was becoming Mr. Corolla.

“Back then, when you came to a small town, you went to the postmaster to find out anything,” he says. “I was the chamber of commerce. I was the welcoming committee. I was the convention and visitors bureau.”

When Sapp came for her first visit that summer, two years after the death of her husband, getting to know Austin was inevitable. Her sister, Liz, and he had become good friends. Liz wanted Bunny to meet this nice man.

The two started spending time together. Sapp would walk with her children up to the store. Austin would show her around some of his favorite spots in and around Corolla.

By the time Sapp’s two-week vacation was over, she was smitten with the charming town — and with the man who knows it better than anyone.

She returned to her Jacksonville, Florida, home. But she wrote letters to Austin. She sent him three without hearing back from him. In her fourth letter, she apologized for pestering him. He wrote back then and told her he didn’t want her letters to stop.

“I don’t really like to write a whole lot,” Austin says. “But I responded to her letters.”

Sapp still has every one he ever sent her.

No desire to leave

Not far from where N.C. Highway 12 dwindles to an access road, Austin, 72, can often be found sitting at a picnic table beneath an oak tree near the post office. He reads and watches vacationers stroll by. He’s happiest when someone stops to visit, whether it’s a friend or an island visitor.

“Every five minutes or so, somebody comes up who’s interesting to talk to,” he says. “Everybody has a story. I don’t think there’s anybody who can say, ‘My life hasn’t been interesting.’”

Over the years, Austin’s conversations with visitors and residents often evolved into history lessons. He eventually began researching town records and tracing the geneology of local residents. In 1996, Norris Austin shared his knowledge of the region in Corolla Walking Tour and Guidebook, a still-popular tool for exploring the island.

His research led him back to the early 1700s, when Thomas Austin shipwrecked on Hatteras Island. “We washed ashore and have been here ever since,” Austin says.

Once he moved back home in 1959, Austin never again seriously considered leaving, even though his job as postmaster took him to just about every state in the nation for conventions. No place ever felt like home.

He couldn’t leave, even when his heart followed Sapp back to Florida.

He did visit her — often. And she flew back up to North Carolina on a regular basis. They were seeing each other just about every other weekend for a while there.

But the attachment to place kept getting in the way. Back then, Bunny had six children at home. And although the older ones were nearly grown, she didn’t want to uproot them. And Austin was already a town fixture whose absence would be felt throughout the village.

Despite the tug to settle together in one place or the other, the couple ultimately settled into a friendship that transcends distance.

“It’s probably real strange to people,” Austin says. “But I think it’s better all the way around. I wouldn’t want her to be up here and be unhappy. And I don’t want to be in Jacksonville and be miserable.”

Telephone conversations eventually replaced letters. And for the past 10 years, Austin has picked up his phone every evening to check on Sapp and tell her good night.

And tomorrow morning, sometime between 7:30 and 8, Sapp will get comfortable in the blue recliner in her living room to start her day with a call.