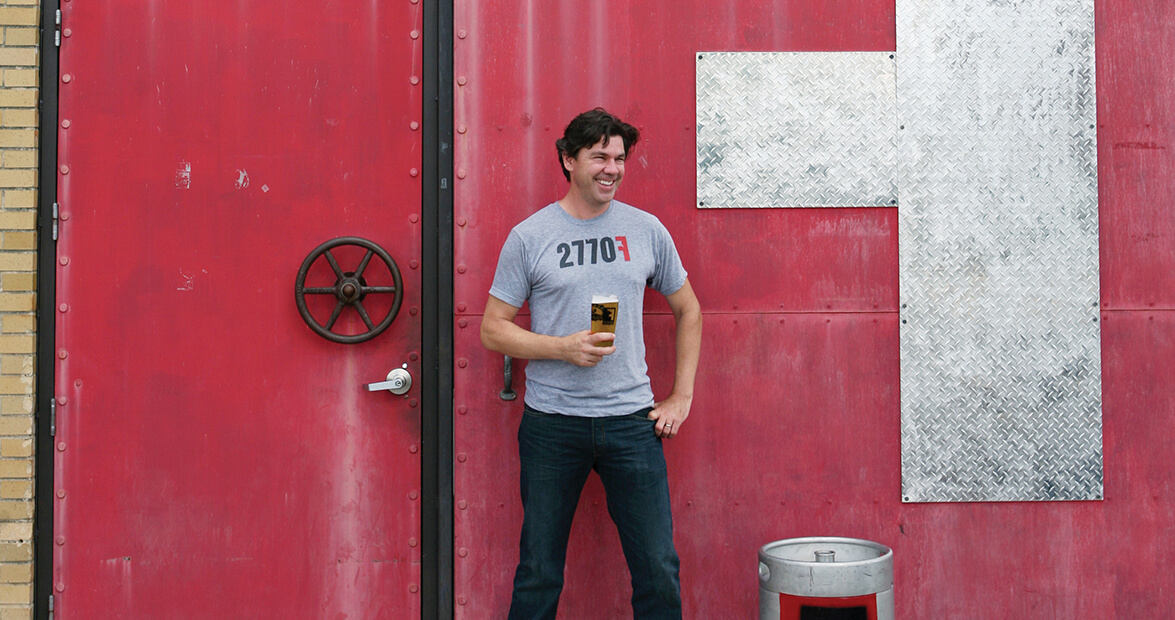 EDITOR’S NOTE: This story was originally published in October 2012.

The bar is empty except for a tall, medium-build man. He sits in the corner, illuminated by the soft glow of a laptop computer. His eyebrows are drawn down in a furrow as he stares at the screen. His fingers begin to type out a message. A woman opens the door.

Sean Wilson just returned from a week of vacation and it’s Monday morning. He’s trying to catch up on emails, but as any boss knows, Mondays are days for interruptions.

It seems everyone here at Fullsteam Brewery in Durham needs a few minutes of his time. His event planner needs him. The head brewer needs him. His production manager hands him something to read. A reporter and photographer are here, too. He tries to accommodate everyone but as the day wears on he looks tired.

At least he’s getting more sleep now than when he first opened Fullsteam in 2009. For six months he bartended two nights a week, delivered kegs, organized dinners to promote Fullsteam beer, and called grocery stores and bottle shops to get his half-gallon jug growlers on their shelves.

“I want to bring people happiness,” Wilson says, running his fingers through his thick, dark brown hair. It’s a line he likes to repeat and one he says with absolute seriousness. It’s something he’s thought about a lot.

Wilson holds an undergraduate degree from Wheaton College in Illinois and two masters degrees from Duke University, including an MBA.

Exactly what work Wilson applied that brain to before opening Fullsteam is a bit of a mystery. He describes his professional life then as a mix of doing “everything and nothing.” Something in business, he says, but not something satisfying.

Those two things have shaped Wilson’s life perhaps more than anything else. They’ve helped him become North Carolina’s top evangelist for local, craft-brewed beer. They’ve helped him become a guy willing to look naysayers square in the face and argue that beer is bigger than its alcohol content. That it brings people together and shouldn’t be something we fear. That beer belongs to all of us, and we should embrace it.

Beer’s reputation has suffered at the mouths of both the drinkers who abuse it and the politicians who disparage it.

In a few words, that’s why a third of the world’s beer styles were outlawed in North Carolina as late as 2005. German lagers; English bitters and barleywines; and Belgian dubbels, tripels, and quads all have an alcohol-by-volume content higher than what the state’s 6 percent cap allowed.

By their nature, those beers require more malt: a starchy grain that, when broken down, produces fermentable sugars. Yeast in turn fleshes out those sugars, producing alcohol and releasing carbon dioxide.

For a beer connoisseur, not having the choice of a stronger brew is like handing a wine aficionado a menu that only offers riesling and white zinfandel when, really, she wants a glass of cabernet.

The cap on malt beverages was a product of Prohibition. North Carolina voters passed a statewide ban on the sale, manufacture, and consumption of alcohol in 1908. Eleven years passed before the 18th Amendment — federal Prohibition — became law. Legislators didn’t bother to repeal the statewide ban until two years after the federal law was undone. Then, in 1937, the General Assembly passed the alcoholic beverage control bill, creating a state board responsible for operating stores that sell distilled spirits.

In that bill the 6 percent cap was fixed. Somehow, unfortified wines escaped regulation; although, on average, their alcohol content is higher than most beers’.

Wilson, his fellow brewers, and others in the craft-beer community saw the cap as a harmful legal relic. In 2003, they started lobbying to change it. They gave their campaign a name — Pop the Cap — and Wilson led them through a stubborn Legislature.

Finally, a bipartisan group of state legislators listened. They sponsored House bill 392, which proposed raising the cap to 15 percent alcohol by volume on malt beverages. Both houses passed it, and the bill was signed into law in August 2005.

After that success, Wilson didn’t want to leave the friends he made in the close-knit world of craft brewing. He had a vision for something great. The South, he thought, needs its own beer. It needs a beer that nods to the sweet potato. It needs another that nods to the classic lunch of an RC Cola and MoonPie. Fullsteam has both: Carver Sweet Potato and Working Man’s Lunch beers.

Wilson says he wants Fullsteam beer to make people think about possibility. The brewery’s name itself embodies his sense of optimism and wonder.

From the outside, the brewery appears as an ordinary warehouse from the 1930s. Inside, orange picnic tables sit among pinball machines and a Ping-Pong table. His two daughters, ages 12 and 15, like to come here to be with their dad. Wilson is happy to have them. He’s busy but wants to spend time with them, and he can think of no better place to do that. And he figures that if attitudes are to change about beer, he can start with them, and he can start here. 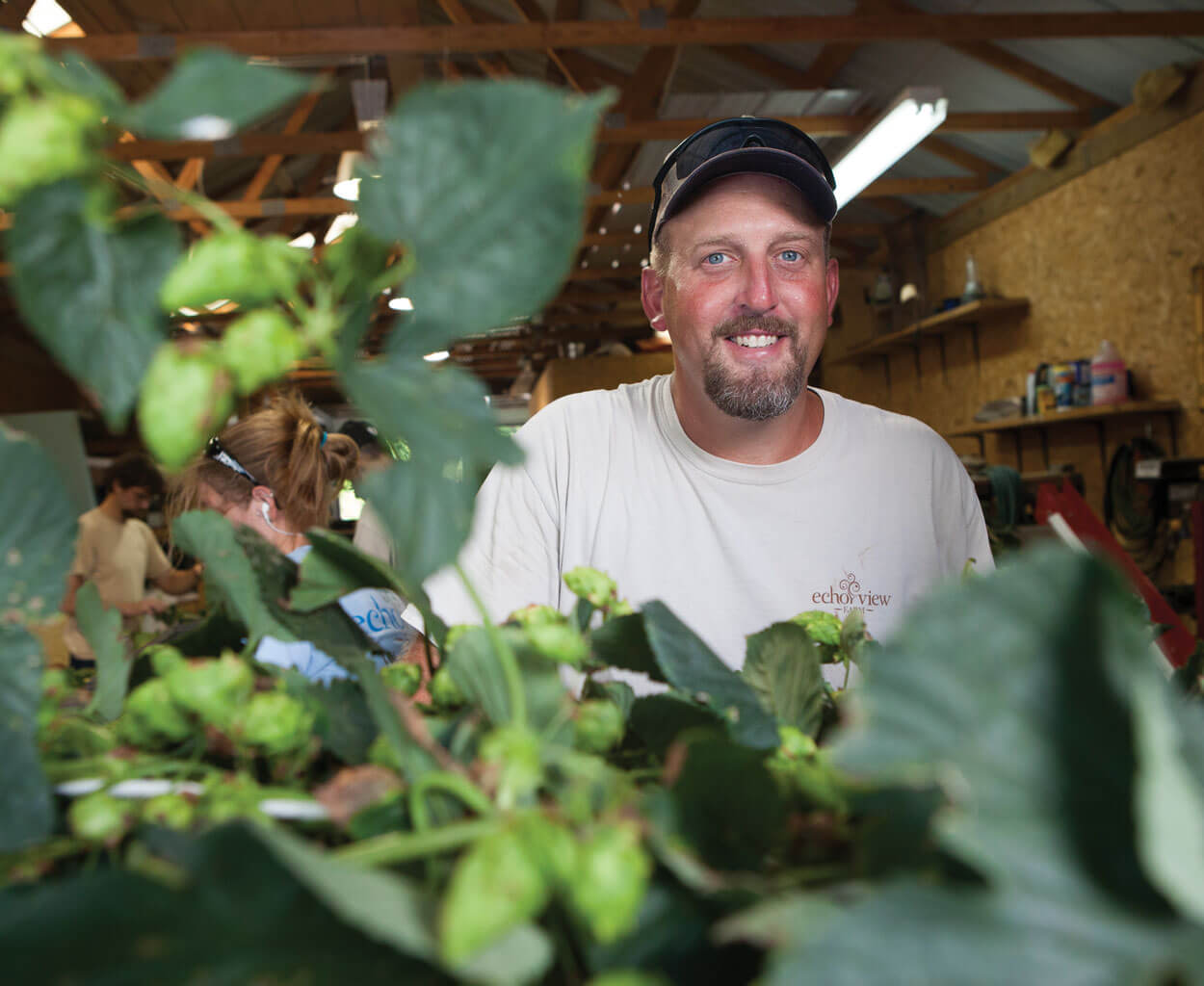 Stacy Wilson worked as a general contractor and machinist, but farming is in his blood. photograph by Joey and Jessica Seawell

On a farm in the rural hills outside Asheville, Stacy Wilson’s fingers are stained yellow. Stacy is the farm manager at Echoview Farm in Weaverville, and today he is harvesting hops.

Hops are lime green, cone-shaped flowers that produce a bitter-tasting oil called lupulin. That oil helps balance the sweetness of malted grain in beer. Lupulin looks like pollen. If you peel back the layers of a hops cone, yellow, powder-like specks empty into your hands. Stacy has them all over his.

He leads a group of workers through a two-acre plot of hops that grow toward the sky. The leafy green plants climb a piece of twine that’s part of a trellis system. They grow and look like vines but are called bines because they don’t have tendrils. They can’t reach out a green stem and coil it around something. Instead, Stacy trains each bine to wrap itself around the twine; as many as five bines grow together on a single rope. They rely on the collective strength of one another to grow as tall as 20 feet. Once they grow up, it’s time for them to come down.

Stacy bends toward the ground, reaches out his arm, and cuts them at their crowns. He loads the twisted bines in the back of a pick-up truck and drives them to a barn where each cone is removed by hand. The harvest will be complete by the end of the week. Stacy expects to have 80 pounds of hops this year.

That’s not nearly enough. Of the 67 craft breweries in North Carolina, that haul might supply just one — and then only for about two weeks of brewing.

Hops here are an experimental crop. North Carolina hugs the southern latitudinal line above which climates are favorable for growing hops. So far, hops farmers have hit some roadblocks. Our humidity spreads disease, our soil isn’t ideal, and our days aren’t long enough. Hops prefer 15 or more hours of sunlight every day in the summer. North Carolina receives about 14 hours in June.

A few hops varieties do seem to grow well here. It’s Stacy’s job to figure out which ones. He researches them all and plants with precision. He wants something to grow out of this ground because he grew up on it.

As a boy he helped his grandfather put up hay and tobacco on the family home place two miles away. He worked with his aunts and uncles there to grow a six-acre garden full of sweet corn, squash, and pole beans. He still lives there today, where he, his father, and his son now tend a one-acre garden.

Stacy was born in Weaverville and he never plans to leave. He’s rooted here.

If this land’s been good to him, he says, surely it can be good to something else.

Roger Kimbrough is standing in Aisle 7 of Bestway Grocery in Greensboro. He’s standing in the last aisle of this small store that’s less than a quarter of the size of most grocery stores in North Carolina. Here, an 80-foot refrigerated display case runs along a brick wall. Kimbrough stretches out his right arm and sweeps it back and forth and up and down. He jokes that there are easily more than 99 bottles of beer on this wall. There are more than a thousand, in fact.

Kimbrough is a clean-shaven businessman with a penchant for Polo shirts. His brown hair is neatly kept and swept to the right. Bright, white light from the fluorescent tubes in the display case bounces off his black, metal-rimmed glasses. He studies the collection of beer.

Kimbrough sees this aisle every day yet it still impresses him. When he bought the Bestway nearly four years ago, he imagined a wall of beer about half this size. It was in his 80-page business plan. He described it as showy, as something to help anchor this store.

A Detroit native and University of Michigan graduate, Kimbrough worked for years as a buyer for Macy’s department stores. He met his wife, Nancy, while working at the store in downtown Atlanta. They later managed two stores in California and then transferred to North Carolina 11 years ago to be closer to Nancy’s parents.

As they approached their 50th birthdays, they grew tired of large-scale retail and wanted to do something smaller.

“I looked at hardware stores and a few small grocery stores,” Kimbrough says, “but I wanted this place because of where it is.”

Bestway sits at the intersection of Walker and Elam avenues in Greensboro’s tight-knit Lindley Park neighborhood. It’s part of a cluster of businesses that includes a burger joint, a pizza place, and a Laundromat that doubles as a bar.

In the evening this intersection fills with people. They relax on outdoor patios, lean against storefronts, or simply stand on the wide sidewalks. They are college kids, young professionals, families, and retirees. They are friends and neighbors. They are a community. Bestway belongs to them.

Since 1947, the grocery store has been a landmark here. It was an A&P; then a Bi-Rite; and by the mid-’70s one of about 17 Bestways, a popular grocery store co-op that commanded a third of the grocery business in Guilford County. It’s believed to be the longest running grocery store in town.

Kimbrough wears a satisfied smile when he tells you that the store has more than doubled its sales in the last four years.

Beer is no small part of that success.

As people step inside in a steady stream, almost all of them share one thing in common: They start shopping on the last aisle. Aisle 7.

It’s odd to enter a grocery store and shop the last aisle first. Most stores subtly suggest you follow their carefully engineered traffic patterns, leading first to the items that present best. The ones that project a good face. The colorful fresh fruits and greens that shoppers respect.

Inside Kimbrough’s Bestway, beer has risen to respectability.

For a merchant, farmer, and brewer in North Carolina that respect is reason for hope. It shows that attitudes are changing. That with dozens of breweries opening in the state since Pop the Cap passed in 2005, a movement is growing. One that asks us to try new beers like a dunkel, dry stout, or something with sweet potatoes. One that’s rooted in its community. Mountain town or Piedmont city. One that, like the Bestway, is building on tradition.