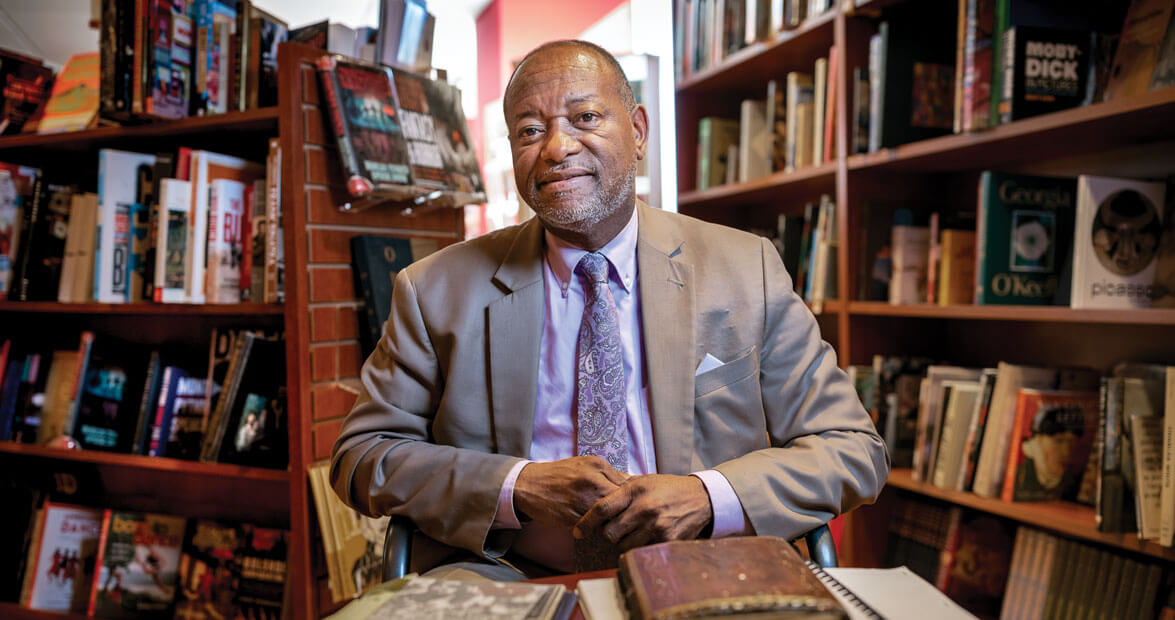 Sound and rhythm have saved Lenard D. Moore ever since he can remember. It started long before he became a haiku poet — before his work was studied, translated into several languages, or anthologized — before he could even write or read. Now 61 and an associate professor of English at The University of Mount Olive, Moore recalls going to church on Sundays as a young boy in Jacksonville — cleaned up nice, wearing a bow tie that his mother would straighten just so. Sliding into a pew, he’d be drawn into the service as soon as the preacher began to speak. “You had to pay attention,” he says. “That was a way of life.”

What captivated him wasn’t necessarily the words themselves — talk of heaven or hell, the evils of Jim Crow — but the way they were said. Moore remembers vividly the preacher’s sonorous voice rising and falling, pouring out emotion and circling back to the same refrains. “Those sermons weren’t just for the mind — I felt them,” he says. Adult meanings may have gone over his head back then, but sound and rhythm went straight to his heart. “Cadence, rhyme, repetition,” he says. “Sermons had a lot in common with poetry.”

Haiku, a 17th-century Japanese art form, is, for Moore, “like a spiritual journey and a new way of life.” The three short lines are, at first glance, deceptively simple. Yet within those lines is all that needs to be said. Moore’s seven collections of poems, rooted in his eastern North Carolina experience, explore themes ranging from military service to jazz to unity among African-American men. In 1995, he founded the Carolina African-American Writers’ Collective, which began as small gatherings around his kitchen table and went on to support acclaimed writers, like 2018 Pulitzer Prize finalist Evie Shockley. In 2008, Moore was elected president of the Haiku Society of America. Six years later, he received the North Carolina Award for Literature, the highest civilian award in the state.

“Appreciate beauty. Discover meaning. Love nature — all of this is what poetry teaches me.”

“Oh, I could talk about haiku for days,” Moore says with a chuckle. There are variations on the three lines everyone knows: A tanka, for example, is an extended haiku, and a haibun combines prose and poetry. A renku is a collaborative poem created by several haiku poets under the guidance of a renku master, while witty poems about human nature are called senryu. Moore has written them all. And once he learned how to write a three-line poem, he found that he could write in other forms, too. That’s because haiku taught him how to “take notice,” he says. “Appreciate beauty. Discover meaning. Find harmony. Love nature — all of this is what poetry teaches me.”

If church is where Moore discovered sound and rhythm, his segregated elementary school is where he developed a love of language. “Boy, did I have some good teachers,” he says. They encouraged him to write, science fiction stories to plays. One teacher made each student keep a journal — “a habit I’ve never been able to break,” he says, pulling a tattered notepad from his breast pocket. Ever since high school, he has carried a notebook to jot down what he sees, or new lines of poetry, or words to remember. In the early days, he kept it with him when he worked his great-grandmother’s peanut crop, or a nearby tobacco field, or the vegetable plot that fed his family of nine most months of the year. Hard work was a way of life, and Moore learned it first by working the land with a hoe, rake, and plow. Between the warm earth and the hot sun, rhythm brought relief, connecting muscle to metal to soil.

Both of Moore’s parents worked at Camp Lejeune: His father, a Marine, taught mechanics, and his mother supervised clubs on base. He fell in love with reading in his childhood home, which expanded as babies were born. One day, a salesman showed up at the front door, offering four hardbound volumes of African-American history. Moore’s father offered to help him buy the entire set. From there, the written word took him far beyond Jacksonville — and so did the spoken word, especially when his grandfather told stories late into the night. 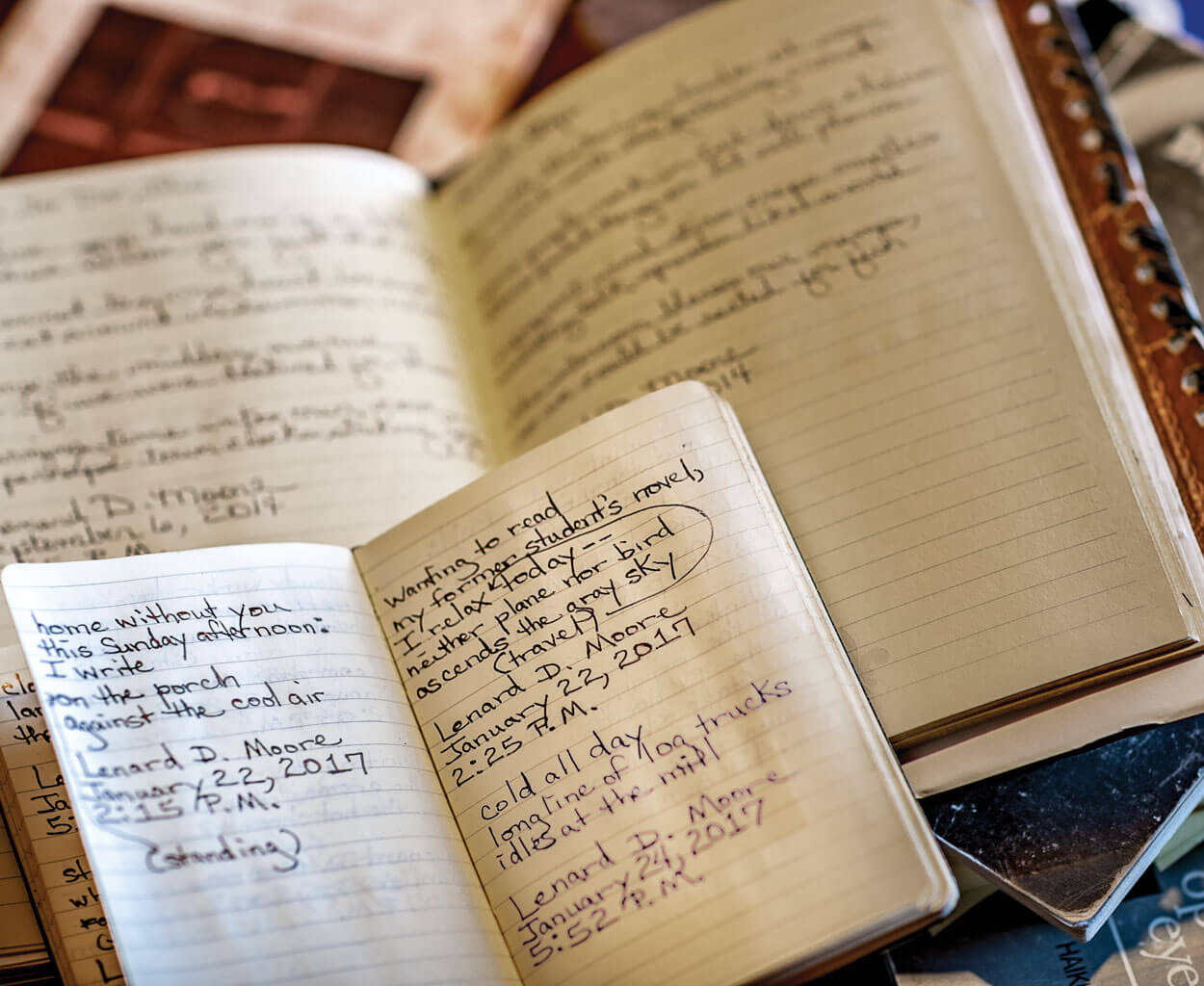 English professor and haiku poet Lenard D. Moore has been filling journals with notes on nature and lines of poetry for 45 years. photograph by Charles Harris

After graduation, Moore enlisted in the Army to see the world in earnest. Stationed in Stuttgart, Germany, he kept filling up notebooks, and, in his spare time, he took a creative-writing class. He wrote love letters to his sweetheart back home, inserting a poem into each one. “I already believed in the power of language,” he says of that time. But he didn’t know how that power would shape his life until he returned home.

One winter afternoon, he lay in his childhood bedroom, sick with the flu. To pass the time, he began to leaf through a literature anthology from his creative-writing class, and found a Japanese haiku translated into English. Just three lines. What could be so hard about that? Outside his window, he could see the winding dirt road, the chinaberry tree, the barren field. As he began to write, his energy returned. Such a short poem required so much work, he realized. Each word must be precise. From that moment, he began to see tobacco country through the eyes of the medieval Japanese poet Basho.

“Without poetry, I might not have made it this far,” he says. It’s no exaggeration. After his daughter was killed in a car accident in 2004, Moore navigated his loss at the local library, where he sat every day for a year, writing for his lost child. Notebooks upon notebooks. Into the small containers of poems, he poured his bottomless grief. All these years later, he still works language the way he once worked the soil: with discipline and rhythm, patience and hope.