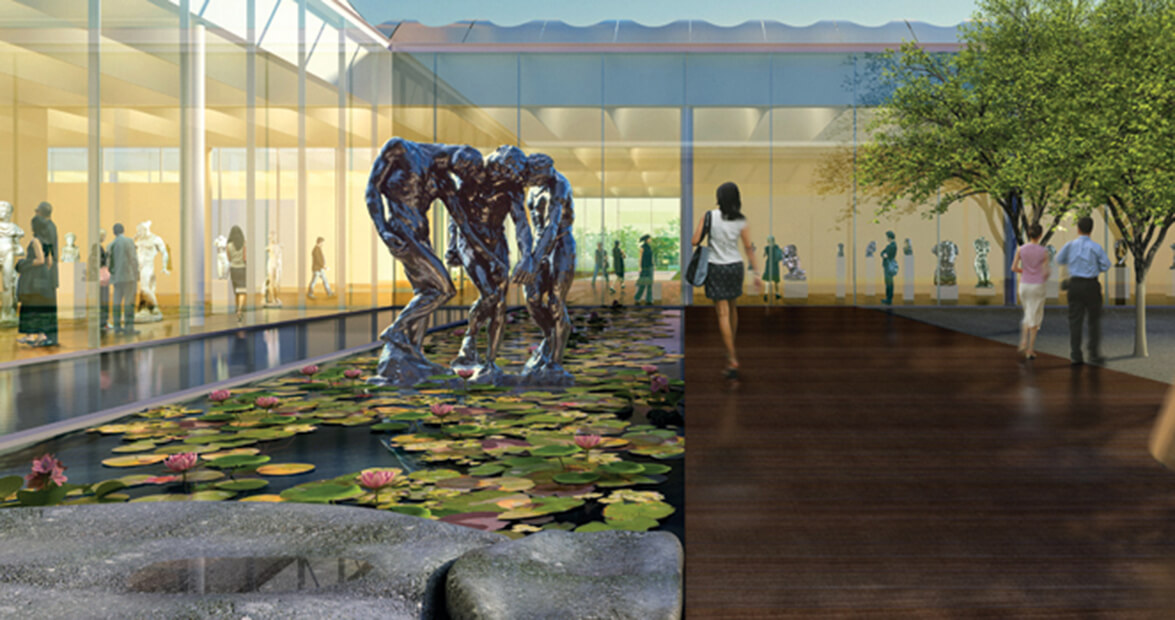 For decades, the North Carolina Museum of Art showed off its treasures inside a brown brick box — a featureless rectangle that looked half like a high school and half like a bunker. Inside, the paintings were crowded together, often downstairs in dim and windowless chambers, so the experience of seeing Monet felt like rooting through your uncle’s basement.

Today, Museum Director Larry Wheeler stands at the front door of his $84 million expansion and gestures grandly to the rows of birches and magnolias, the fountains, the pond with floating lily pads, and the spot at the front door reserved for Rodin. He swoons when he describes the building’s silvery skin made of anodized aluminum, which reflects the waving tree branches and the passing clouds.

And when he opens the front door, you see soft, filtered sunlight pouring in through floor-to-ceiling windows. The walls are stark white, a background so blank that blues and greens jump off the canvas. It’s bright enough to read a newspaper, but hardly a light bulb is lit.

“It’s just too exciting,” says Wheeler, beaming like a kid with a new bike. “There’s nothing else like this. Everyone says it’s a game-changer.”

A nice place to sit

It’s rare that a building in North Carolina goes up with a philosophy, with an ambition, or with anything more in mind than keeping out the rain. But this one comes with the challenge of connecting man-made art to natural beauty, of showing ordinary taxpayers that Greek sculpture and willow trees make a nice combination, that Renaissance paintings look good against a backdrop of Blue Ridge Mountain boulders.

The idea: Build a place so peaceful, so thought-provoking, so picturesque that you’d want to visit even if you couldn’t tell Andrew Wyeth from Wyatt Earp. It is simply a nice place to sit.

“The central notion,” Wheeler explains, “was if we could make people come into this building, they would be both comforted and uplifted by the experience. Or, if they didn’t want to look at art, they could have a cup of coffee and sit with Rodin sculptures.”

In New York, Washington, or Chicago, an art museum stands on a crowded city block with cabs honking and buses whooshing past. You can get there on a subway. But North Carolina hung its paintings and stood its sculptures in the middle of 164 acres of grass and trees.

Until now, the museum didn’t interact with that greenery so much as jut out of it like a construction cone. Back in the 1970s, original design plans called for elaborate pools and gardens spilling off the rooftop — an idea that died in a squeezed state budget.

“There wasn’t any money,” Wheeler said. “You chopped off the gardens and the pools of water, and you were left with a museum bunker.”

That began to change in 2003, when the state tore down the Polk Youth Correctional Institution that was an eyesore on the grounds. Then, in 2005, the city ran a path through central Raleigh, built a bridge over the Beltline, and drew thousands of hikers and bikers into Wheeler’s backyard.

With the prison knocked down, the woods started filling up with art: a tower made of old newspapers, an obelisk made partly out of the prison’s bricks. The museum showed movies on a brick wall and held concerts you could hear from the bike path. Suddenly, Wheeler was using all 164 acres.

So when the expansion got approved, the first priority was a building that tipped its hat to nature. Walking through it, you’re surrounded by glass. The rocks, leaves, and water outside are on display as much as the giant Robert Motherwell abstract, and your eyes roll over all of them at once. This building celebrates both the handmade and God-made varieties of beauty. It shows off stone cut with a chisel and stone pulled out of the ground.

Another goal for Wheeler was filling the halls with real light. He wanted the pictures glowing under it, so that when visitors look at a Madonna and Child painted in the 14th century, the gold leaf would shine like it did for Giotto as he created it. Half the museum’s walls are glass, and more light floats down from recessed skylights.

All of the rays are soft and filtered to protect the paint from fading, and they create the golden quality of a sunroom at dusk. It’s peaceful inside. Wheeler describes it as Zen-like, a place to consider 2,000 years of artistry and let your mind go.

Third, Wheeler wanted a place that felt like North Carolina — that reflected its working-class, everyman identity. He didn’t want a snobbish place, or one that required an art history degree to enjoy.

The art isn’t forced on anyone here. When you walk in the front door, you can turn right to check out Frank Stella, Ellsworth Kelly, and a dozen other head-scratching abstractionists. Or, you can turn left and consider a sculpted pilgrim or a portrait of Ben Franklin.

There’s no set path through this museum, and there’s hardly any explanation of the works. If you want a history of European painting through the centuries, it’s available on headphones. But Wheeler isn’t going to push it on you with huge blocks of text. The walls are incomplete, so you can see where you’re going and where you’ve been. As you move into the traditional African art, you can turn around and see the Italian Renaissance happening over your shoulder.

The point at this museum isn’t to fixate on one piece, then another, then another, but to examine them all together, equalized against a white background like children playing in the snow.

“I don’t think it’s an expansion; really, it’s a whole different set of rules,” said Jeff Whetstone, an art professor at the University of North Carolina at Chapel Hill whose work is displayed on the museum campus. “There are all kinds of different ways you can go through it. You could be looking at contemporary American painting or African paintings or Dutch landscapes. These different kinds of art inform each other. I think it’s going to get a lot of attention nationally and internationally.”

Outside, the old brown box of a museum will stay put next to its shiny new counterpart and will house visiting exhibits and classrooms. That’s the place for crowds and children, says Wheeler, adding that the old building gets a new glass front in the bargain.

But Wheeler believes you’ll come for the expansion, for the bright silver, tall glass, and peaceful lighting. And as your eyes wander over the centuries, you’ll add to North Carolina’s collection, just by being there to enjoy it.