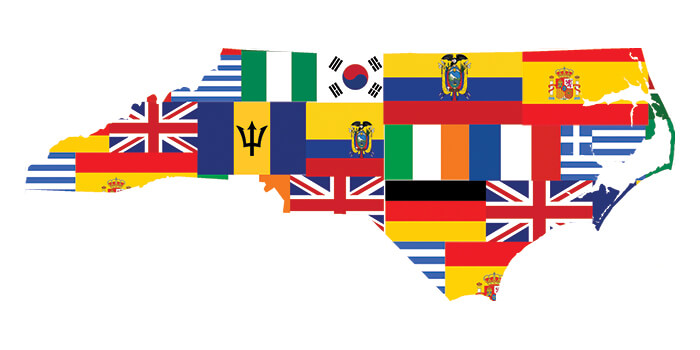 The best road signs are the ones you see right as you’re entering a city’s limits. Of course, there’s your standard WELCOME TO SUCH AND SUCH CITY. And if you’re driving into a small town, a quirky superlative often gets a marker of its own: HOME OF THE WORLD’S LARGEST FRYING PAN. (Hi there, Rose Hill.) Sometimes you’ll see an outdated declaration — “Fit Community 2007-2010” — that makes you wonder why this sign is still around, and what happened to the last five years. These signs emphasize brevity but still find a way to say so much about the cities to which they refer.

If there’s one particular sign that piques my interest, it’s always the one that lists a town’s international sister cities, far away places, with long chains of tongue-twisting syllables, fun to read as your car zips past. Sister cities. What does that mean? What does Raleigh have in common with Xiangyang, China or Rostock, Germany? And what do these partnerships do?

So many questions. The answer to the latter of these two: A lot, actually. Ask anyone involved with one of North Carolina’s Sister City International programs, and he or she will tell you these relationships noted on highway markers are not simply there for vanity.

“You can go and visit countries all over the world and have wonderful experiences and see beautiful things,” says Marjorie Salzman, president of Raleigh Sister Cities. “But the Sister Cities program offers an opportunity to get to know people and their communities in a way that leads to a better understanding of their everyday life, philosophies on living, and views of the world.”

There are currently 19 cities and towns, big and small, in North Carolina that have existing Sister City relationships, and two more are in the early stages of establishing programs. A community can partner with just one city or have multiple “sisters” across the globe, and each relationship receives approval from the city council.

Sister Cities International was founded in 1956 by President Dwight D. Eisenhower as an adaptation of the popular European concept of “twinning” that emerged after World War II. It was established as a way of promoting good will and creating enduring peace between formerly warring countries.

In its 59 years of existence, Sister Cities International has narrowed the geographical distance of communities that share lots of similarities but perhaps not the same continent.

“You begin to appreciate how we are all the same,” Salzman says. “We pretty much all want the same thing.” 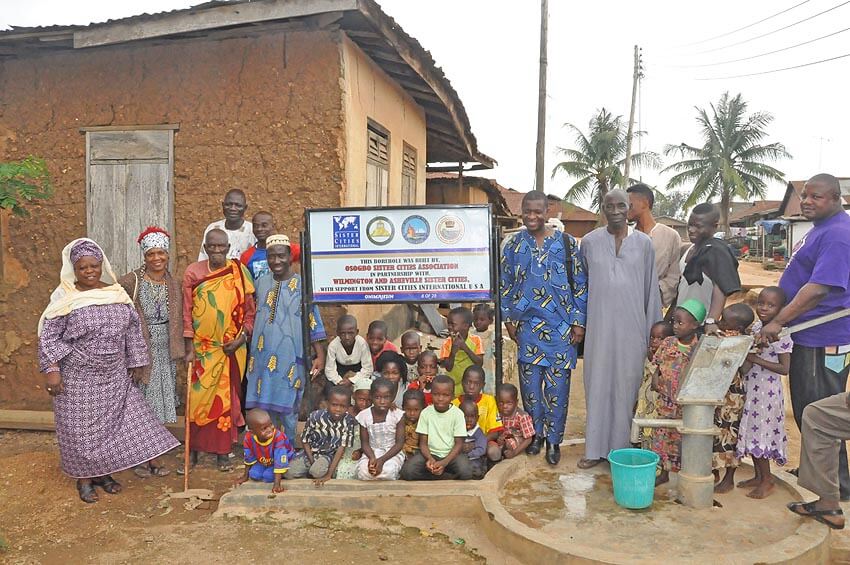 Having access to quality health care is one such thing, but for a variety of reasons, it can be a greater challenge for some countries to obtain it more so than others.

But the hope of making one African community healthier and safer is much closer to becoming a reality thanks to a partnership between Asheville, Raleigh, and their respective Sister Cities of Osogbo, Nigeria and Xiangyang, China.

These cities have worked together to improve an Osogbo medical clinic, making it the first in Sub-Saharan Africa to be brought up to World Health Organization standards. As a result of their efforts, it now has electricity and an incinerator for medical waste. While before there was no running water at the clinic, which specializes in maternal health, it now pours freely from the faucets.

Valeria Watson, who spearheaded the efforts on behalf of the Asheville Sister Cities organization, says the updates weren’t “some big, fancy thing” but, instead, a tangible testament to what cities can accomplish when they work together.

Watson says she’s proud that the project focused on its grass roots, which was a requirement of the grant presented to Sister Cities International by the Bill & Melinda Gates Foundation.

“We have to work with organizing the local people on the ground of Osogbo, so it wasn’t an old paradigm of us coming from a developed nation telling them what they had to do or should do,” she says.

The clinic is just one example of how North Carolina towns are finding new ways to collaborate with their Sister Cities.

Prior to the clinic project, Asheville Sister Cities built wells in Osogbo, so women and girls wouldn’t have to travel as far to find drinking water for their families.

Many Sister Cities chapters boast pen pal opportunities and cultural exchanges for local students. Such programs can create lasting bonds among participants, and for one couple, matrimony. As the story goes, boy travels on exchange from Compiègne, France to Raleigh. Boy meets Carolina girl. Boy and girl fall in love, get married and still live in the City of Oaks. The folks at Raleigh Sister Cities are pretty giddy about that story.

And after those involved with Burlington-Alamance Sister Cities discovered that their Sister City, Soledad de Graciano Sánchez, Mexico, was in need of a fire truck and safety gear, they went on a statewide hunt to find unused equipment — and a truck — and delivered it themselves, says Barbara Shepard, the North Carolina coordinator for Sister Cities International.

Our state’s towns have a lot to offer their Sister Cities, but they, too, have so much to gain: broadened horizons, deeper cultural understanding, and most importantly, kinship. The same blood might not pump through all our hearts, but our hearts do still pump.

As Watson says, “They trust us, and we trust them.”