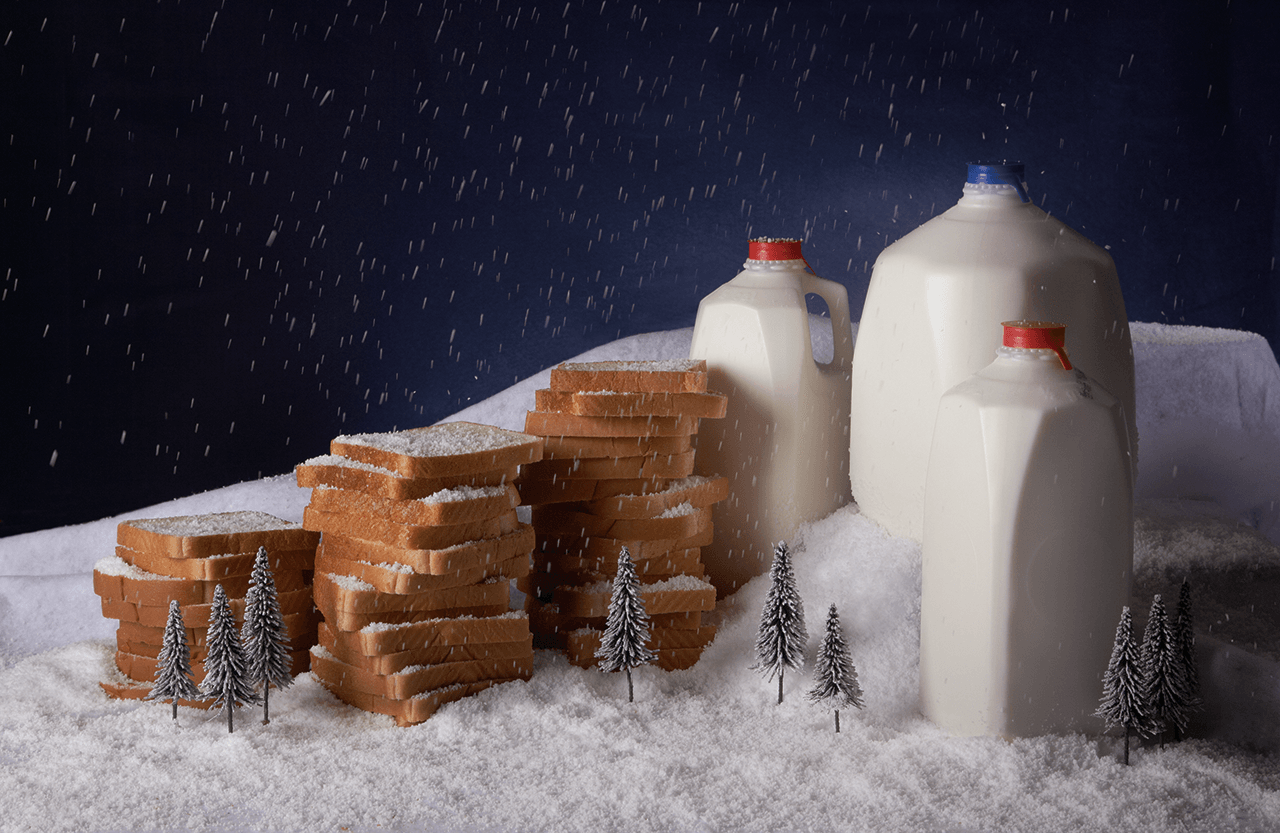 We were having a wintry weather event in the Piedmont Triad, by which I mean four or five snowflakes had been spotted in the median of I-40 between Winston-Salem and Burlington. The highway patrol had been called out to wave along the rubberneckers trying to catch the first glimpse of precipitation. Part-time baggers and checkers had been called in on their day off to man the aisles of the local Harris Teeter, which was quickly running out of bread, milk, batteries, candles, and beer.

I was just settling in at home — classes at the college where I teach having been canceled for the week — when my friend Stuart called me up and asked me to turn on the television. Just like a Yankee, I thought. Of course I already had the television on, and the radio, too. Regularly scheduled programs were being interrupted for the latest news of the impending storm. The oldies station had faded out “The Lion Sleeps Tonight” mid-wimba-way to bring us the latest on road conditions.

My television has been on, I said. Stuart told me to tune in to the local news. As if I were sitting around watching the soaps. Stuart, see, was born and raised in Atlantic City, New Jersey. He went to college in northern Ohio, graduate school in Iowa, and had moved to Greensboro after a decade in Boston. He had told me stories about Iowa winters during which he did not wash his hair in the morning for fear of it icing up on his way to class. I had a hard time picturing this not only because it was so exotic to me, but also because I had to imagine Stuart with hair.

What? I asked. I was starting to get annoyed. I might have been missing the Doppler.

Don’t you see him? Stuart asked.

A weatherman bundled up in an oversize, fur-lined parka stood in the parking lot outside the station. In one hand he held a saltshaker and in the other an ice cube. He poured some salt on the ice cube to show us just exactly how those noisy trucks turned the roads from ice to slush.

Can you believe this? Stuart asked. Having once searched for an hour for his car on a Boston side street after it had been buried beneath a drift, only the tip of its radio antenna visible, Stuart found this demonstration wildly funny. To me, however, it was riveting, the information it imparted valuable. It might seem dramatic to a transplant, but high drama is just as much a part of what we call “some weather” as leaving work early in order to avoid getting stuck with only a quart of skim milk. During such an event, the local weathermen turn into cheerleaders, working us all into a frenzy. You can almost feel their pulses quickening from your sectional sofa as you sip hot chocolate and bank the fire. Six to 10 inches! Don’t drive unless it’s an emergency! Black ice!

It doesn’t matter that, more often than not, our weathermen are either premature or inaccurate in their predictions. It’s hardly their fault if a storm takes a turn. Either way, we get a couple of snow days and a month’s supply of bath tissue out of it. Plus, there are times when the prediction is conservative, and we get walloped. A few years ago, I was dating a woman who had moved back to her hometown in North Dakota. It was February and 20 below in Fargo. I sold her on some 60-degree sunny days. Get on down here; we’ll lay out, I said. (I had to explain to her what “lay out” meant, but once she got it, she was packing her sunscreen.) She landed on a tarmac barely swept of the snow that had been falling for eight hours. Although our blizzard was but a dusting to her, she was not pleased with me, having packed only sandals, a light sweater, and some Coppertone in her featherweight carry-on.

Those of us who have lived in the state for a while are fond of reminiscing about those pre-global warming days when the state got some serious snowstorms. I left the Coastal Plain for college in Boone just in time for the winter of 1978. My dorm was at the top of a vast parking lot down which we slid each morning on ice so thick that four-wheel drive was useless. For weeks, we threw snowballs and snow-themed parties.

Then there was the infamous March storm of 1993. It was my first year in Greensboro, and I’d decided to pull my 3-year-old daughter down to the park on a sled when the wind picked up and the socked-in sky flashed with lightning. Lightning during a snowstorm? Say what? My daughter was impressed, but I slipped a half-dozen times in my bulky work boots running that sled up the hill, terrified that we would freeze to death a half-block from the house and not be discovered until the azaleas bloomed.

Pretty to look at, but I’d just as soon not mess with it, we say when the snow arrives. Tons of sand and salt to make roads safely navigable are not a big line item in our municipal budgets. I’d be willing to bet that most towns in the state allot more money for Fourth of July fireworks than for overtime pay for snowplow drivers. Lots of people who have relocated here to get away from snow are puzzled, if not put out, by what they see as our lack of preparedness. But unlike more northerly climes, where piles of exhaust-blackened snow hang around the curbs from November to April, our wintry weather does not linger. Even though schools may stay closed for a few days due to patches of ice on rural roads, the day after brings only the constant dripping of thaw, the gurgle of snowmelt draining into storm gutters. Occasionally, a particularly hardy snowman survives for a week or so, a soggy toboggan on its head, a baby carrot for a nose. A photo of this shrinking survivor might crop up on the front page of the newspaper, a reminder of how wildly we anticipated that quiet blanket of whiteness, and how happy we were to see it go.