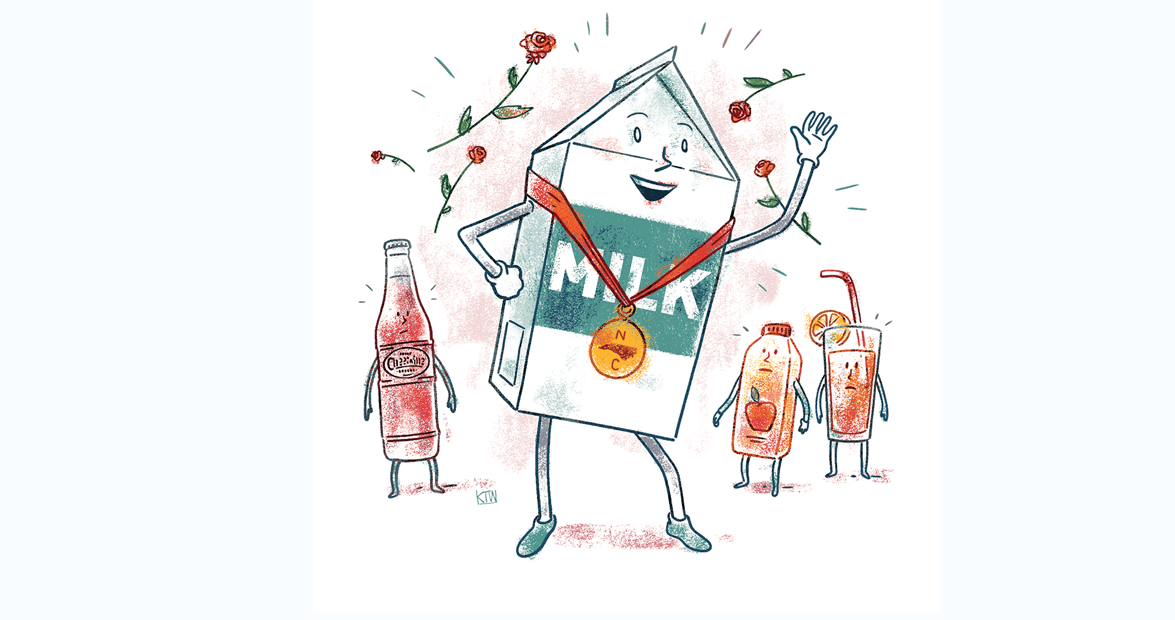 In a tall glass, with a sleeve of Fig Newtons. With the Girl Scout cookie of your choice — Thin Mints, let’s say. With chocolate chip cookies, whether warm from the oven or the last few half-stale holdouts from the bag in the back of the pantry. Some folks dunk. I am not one of those folks.

A tumbler off to the side of your sausage and waffles. To the side of your pancakes. Your rasher of bacon, your bran muffin, your unfortunate prepackaged breakfast bar. A kids’ cupful with your Mini-Wheats. Sure, there’s milk in the bowl, but who doesn’t want a little more? Turn those Mini-Wheats frosted-side up if they’re frosted: We do not want frosting loss. Some people will drink the sugared milk from the finished bowl of sugared cereal. I am not one of those people, either.

I have seen my wife put ice cubes in her milk. This, of course, is blasphemy.

I have seen my mother weeping in the driveway of our childhood home — my twin infant brothers screaming in their twin carriers in the backseat of our green Plymouth station wagon, me standing a few feet away from her — a gallon of milk between us, burst on the concrete, the summer sun beating down, my mother holding the handles of a failed grocery sack. This, of course, is tragedy.

I have never had chocolate milk. Did not like chocolate as a child. On field trips to the dairy, all the kids got chocolate milk. I’d wait, off to the side, for the person leading the tour to disappear into the back, return with my lone red carton of plain milk. I did not care, either, for the paper cartons themselves, the way the spout got soggy no matter how carefully you sipped — though this is primarily a failure of packaging, not contents.

I take my coffee black, but do not begrudge those who need a dollop or two of milk in theirs. We all have our own failings.

The deeply mysterious sweet acidophilus, in its opaque yellow jug, in my grandmother’s refrigerator. The familiar purple top back home. Two percent. Half percent. Buttermilk, which, when asked, my mother says her father always drank. The milkman, the actual milkman, who came to my other grandmother’s house, who delivered summer sausage and sweet rolls and a host of other things you could check off a sheet you hung on the door — and milk, of course, in glass half-gallons, sweating in the insulated box. The metal tops on those bottles: one way of remembering summer.

Cold, poured into the well in a bowl of flour: biscuits.

With a toasted PB&J. With a grilled cheese. In condensed tomato soup instead of water.

Me, in the kitchen, 17 years old, drinking straight from the container. My brothers ratting me out. My parents wanting to know how many times we’ve talked about this. It’s one of the few questions I knew the answer to that difficult year: too many.

My older son pronounces it “meelk.” My younger son isn’t quite old enough to talk. We’ve switched to gallons from half-gallons. How many per week will we guzzle our way through when they’re older, playing soccer, marching in the band, hurtling into curfew age? Already I know well the late-night emergency trip to the store, begat by the discovery of only a half-inch left in the bottom of the jug, the sure knowledge that we’d never survive the next morning. I know which Quik-Stops are open and how late. I know which ones have packages of Pepperidge Farm cookies in wire racks.

I have, incidentally, certainly never partaken of the semi-illegal raw milk my farmer brother did not share with me during one of the major holidays of the last calendar year. I would and could not take the opportunity to note here that it was delicious, complicated, like something familiar and new all at once. Grassy. Beautiful. But this is an event that did not happen. There is nothing to cry over, because there was no milk to spill.

Milk is the state beverage of North Carolina — which is not, it seems, of particular note, as not all states even bother with state beverages, and, of those that do, some dozen and a half bestow the honor upon milk. One is tempted to laugh the whole thing off, chalk the enterprise up to marketing or lobbying or default, admit that we do in fact Got Milk and move along apace.

But that would be missing the point. We did not choose beer, in tubs of melting ice, set out back by the grill. Did not choose cider, or wine, or Cheerwine, or sweet tea, or even apple juice, served, churchkeyed open, from those 64-ounce cans in Sunday school classrooms across the state.

Milk, in rows, in the cooler at the grocery. Milk, at home, in sippy cups, or, as often, on the carpet. Milk in plastic souvenir minor-league baseball mugs, filled just to the logo, to accompany the last slice of lemonade cake, the whole thing illicit in the light from the fridge, everyone else in the house gone to bed. Milk. The beverage we choose.