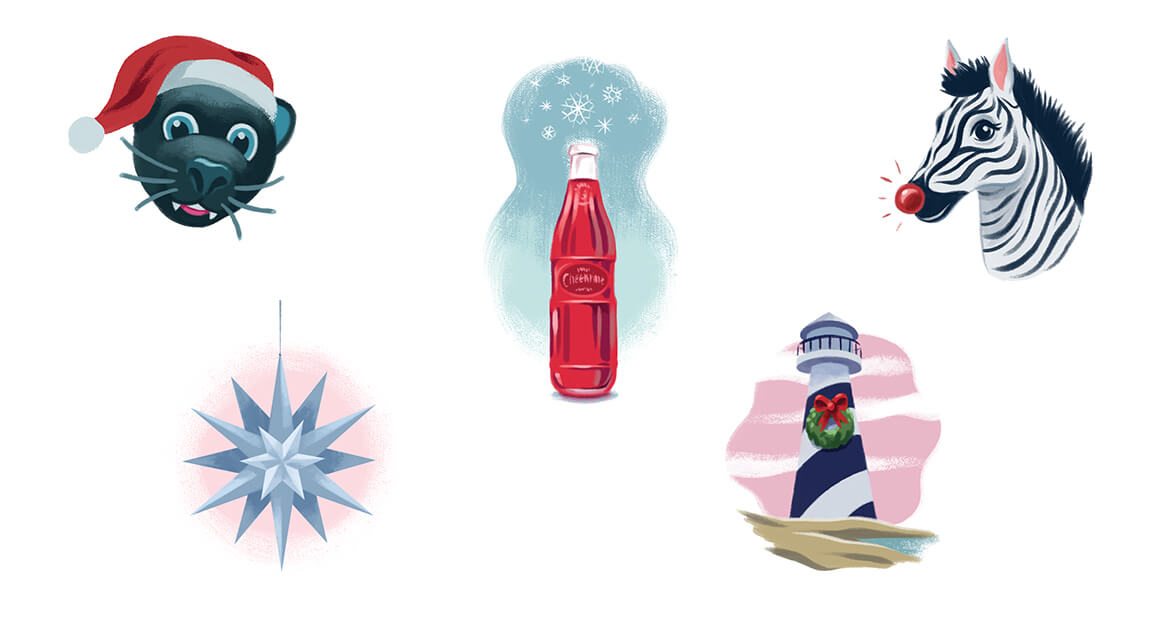 ’Twas the night before Christmas, and all ’cross the state,
folks who weren’t ready were staying up late.
The zebras all snoozed at the Asheboro zoo,
as Lexington chopped up the last of the ’cue.

Christmas was coming for Pamlico sailors.
Same for those paddling the cold Nantahala.
Thawing the turkey or making the dressing,
we’ll ask Billy Graham to give us a blessing.

Mudcats and Grasshoppers sleep in their beds,
while visions of pennants all dance in their heads.
Beech Mountain and Sugar were wishin’ for snow,
though ’twould take a near miracle in Manteo.

Some folks were headed for late midnight Masses,
while others were simply refilling their glasses
with eggnog and Pepsi and red Duplin wine,
apple cider and Red Oak and fizzy Cheerwine.

Bojangles’ had baked up the last pan of biscuits.
We’re spreading pimento on top of some Triscuits.
Why not have a beer with whatever you’re doing,
straight from a can some Ashevillian’s brewing?

Crack open an oyster (this month has an “r”),
then light up a pointed Moravian star.
And nary a thing helps you feel less harried
than firing up a bright luminary.

But nothing at all ever seems like a hassle
in the peace that reigns o’er grand Biltmore castle.
Those few lighthouse keepers are out making merry;
same for the captain of Ocracoke ferry.

The labs are all clean in the cold RTP,
as scientists wonder what’s under the tree.
But where in this state will Santa land first?
We’re bettin’ a green in pretty Pinehurst.

Yonder he comes, down just like a dream,
hollerin’, “Hey, y’all!” as he calls to his team —
“On Deacons and Devils and Pirates, Wolfpack(ers),
go Tar Heels and Aggies and Hornets and Panthers!”

O’er Smokies, the Parkway, and high above Boone,
Lake James and Lake Wylie by the light of the moon.
He soars over fields of ’baccy and sweet taters,
while dreaming of sugarplums and red summer maters.

From Waynesville to Wilson, not much could be finer
than waiting for Santa in North Carolina.
So this Christmas Eve, we’ll toast to our state,
and the people and places that make it so great.

We hope Santa finds you with gifts from his bag.
Merry Christmas to all, from us at the mag!