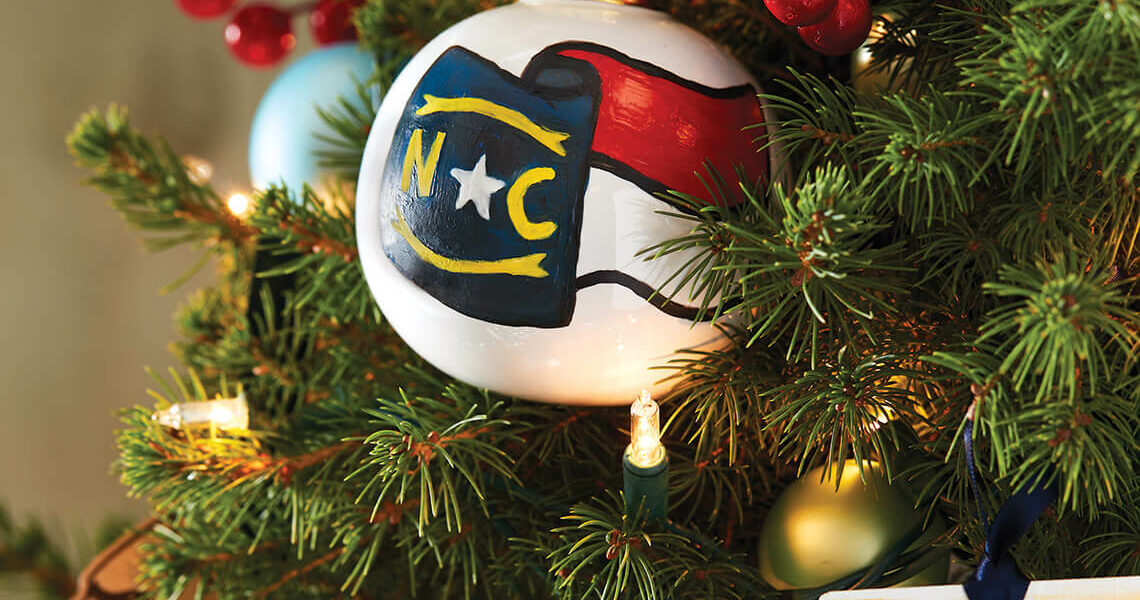 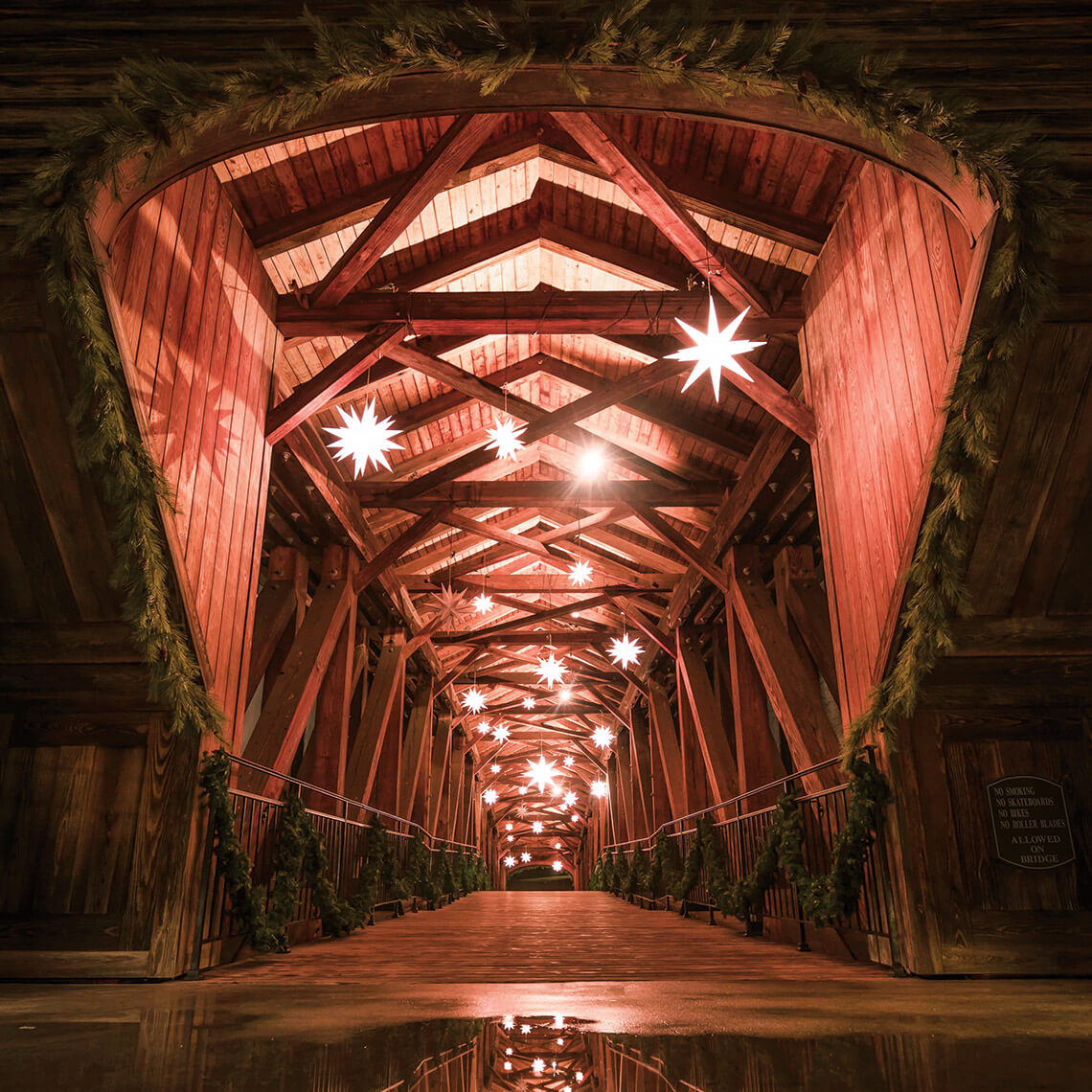 During Advent, Moravian stars — from a 31-foot-tall, 3,400-pound version atop the Atrium Health Wake Forest Baptist Medical Center to those that spangle Old Salem’s Heritage Bridge — are everywhere in Winston-Salem. A reminder of the city’s early Moravian settlers, the stars have also been adopted by North Carolinians across the state, who adorn their porches with a symbol of hope and love. 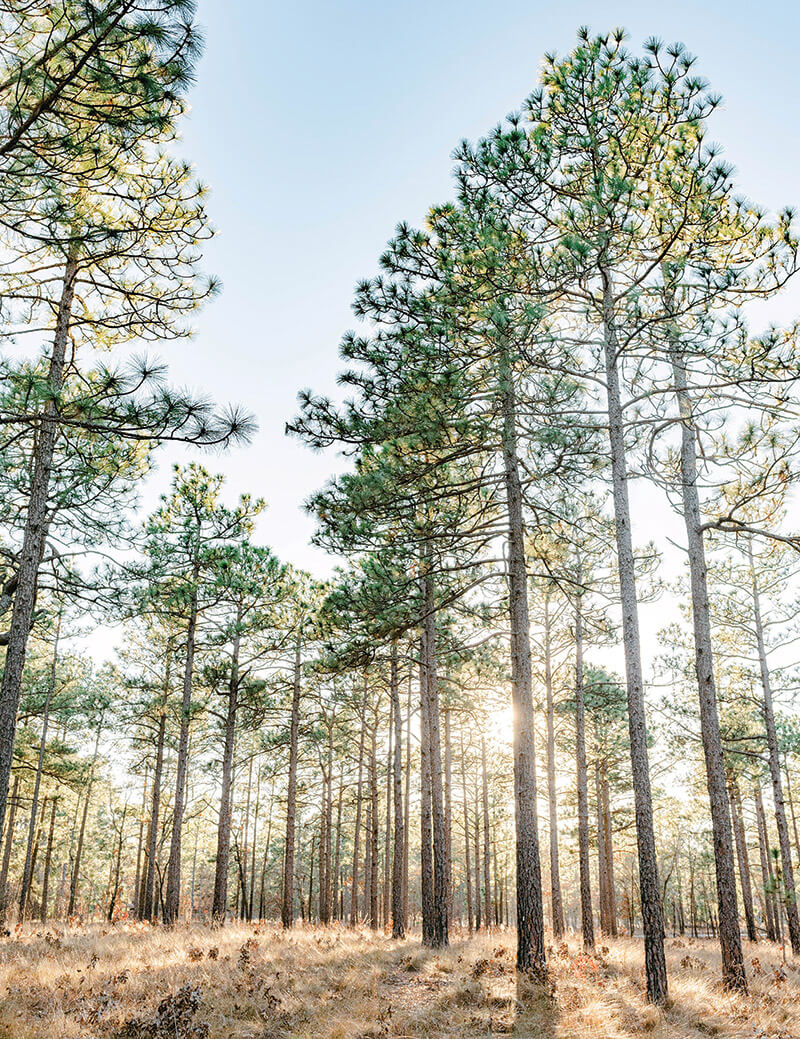 Here’s to the land of the longleaf pine — and the seven other species that convinced the General Assembly to name this fragrant evergreen our state tree in 1963. All 100 North Carolina counties are home to one or more pine species, and yet — perhaps because of that enduring line from our state toast — it’s the longleaf we think of most. At Christmastime, the towering pines of Weymouth Woods Sandhills Nature Preserve add to the festive air around the Sandhills. 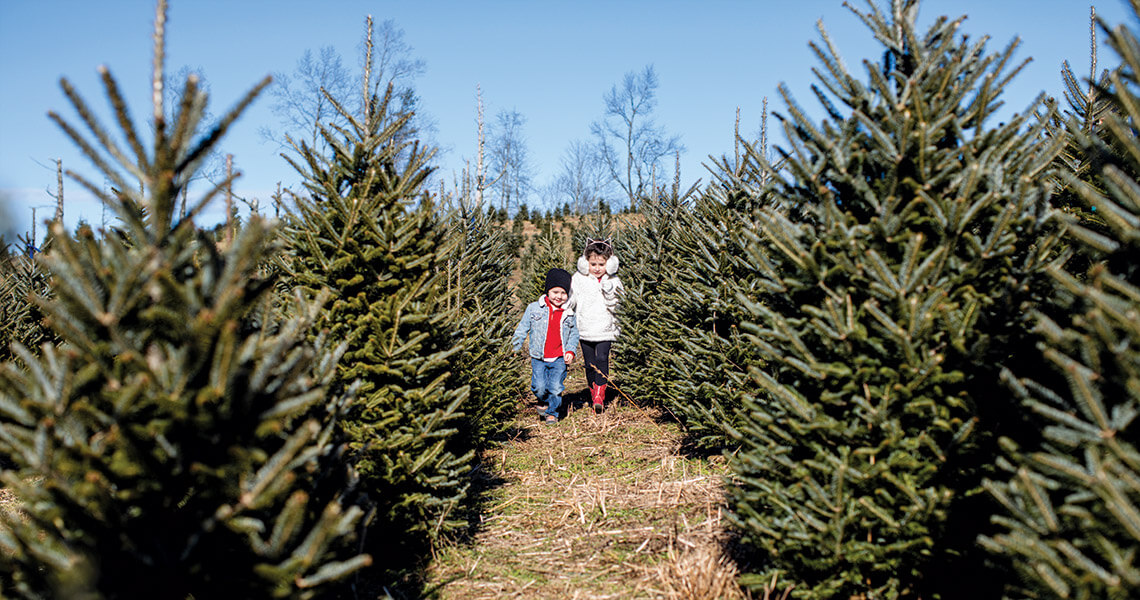 The Fraser fir is the most popular Christmas tree in North America, and we’re proud to call it our own. (The General Assembly recognized it as an official state symbol in 2005.) Since the trees thrive at elevations above 3,000 feet, North Carolina’s 18 westernmost counties are home to rolling patchwork quilts of Fraser firs, including Long’s Tree Farm, a family-owned business in Ashe County. 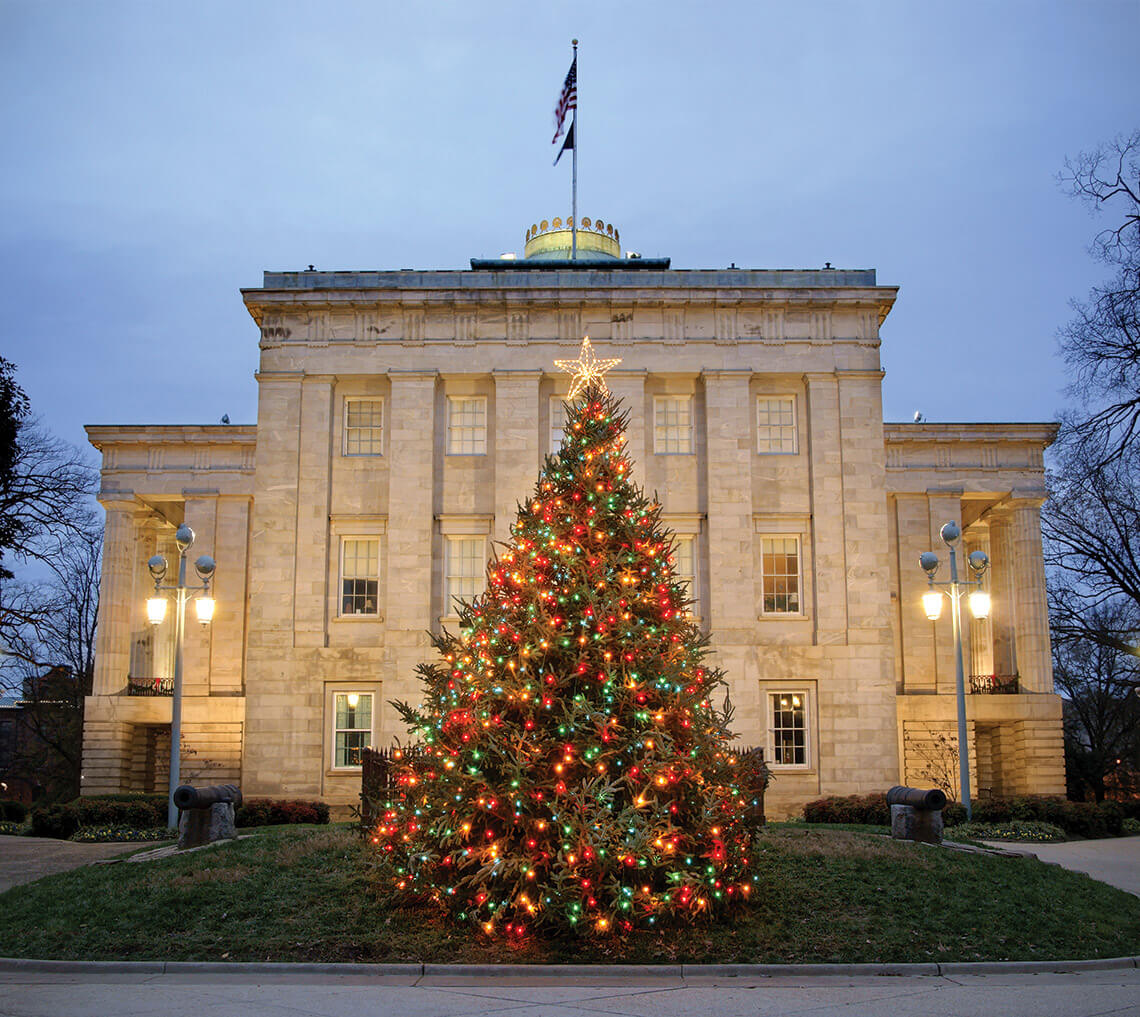 Raleigh • Since 1978, our capital city has rung in the season with a special holiday tradition: Alongside music, cookies and cider, and a visit from Santa, the governor oversees the lighting of a Christmas tree — North Carolina-grown, naturally — on the lawn of the State Capitol. 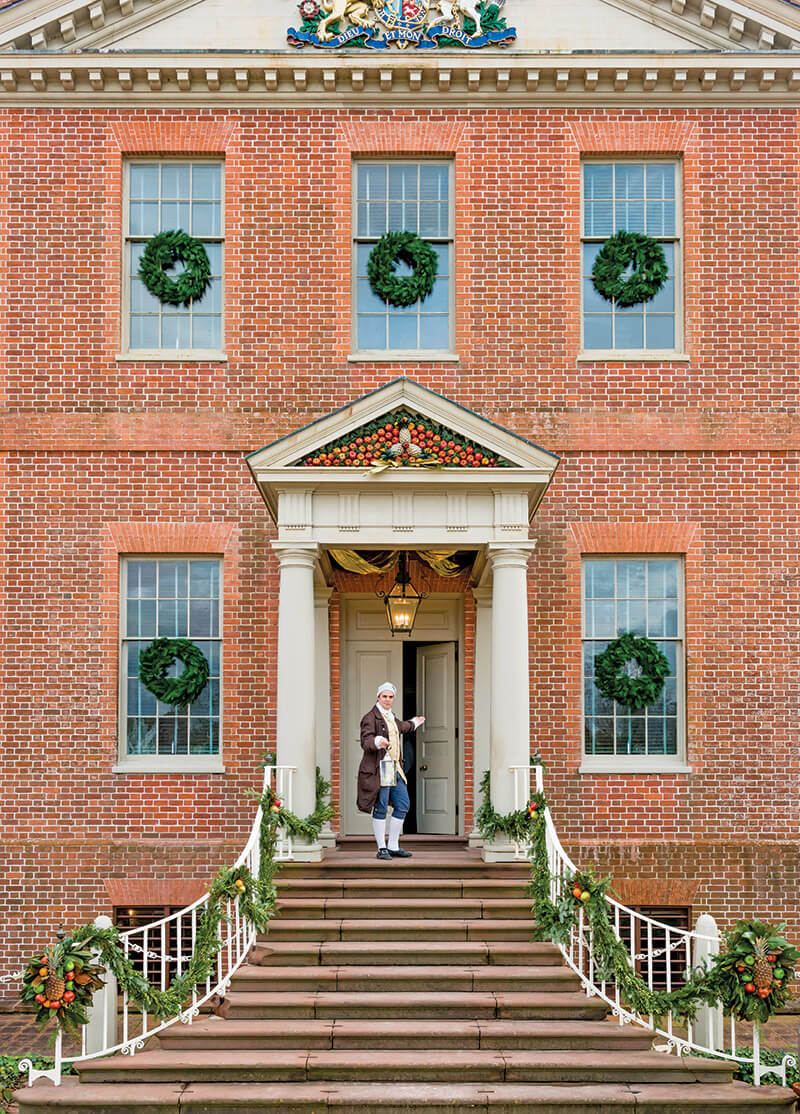 New Bern • Before there was Raleigh, there was New Bern. Completed in 1770, Tryon Palace was the home of royal Gov. William Tryon and the colony’s first permanent seat of government. Today, the restored palace celebrates Christmas in colonial style, with costumed interpreters, candlelit evenings, and period decorations like simple wreaths hung from each window. 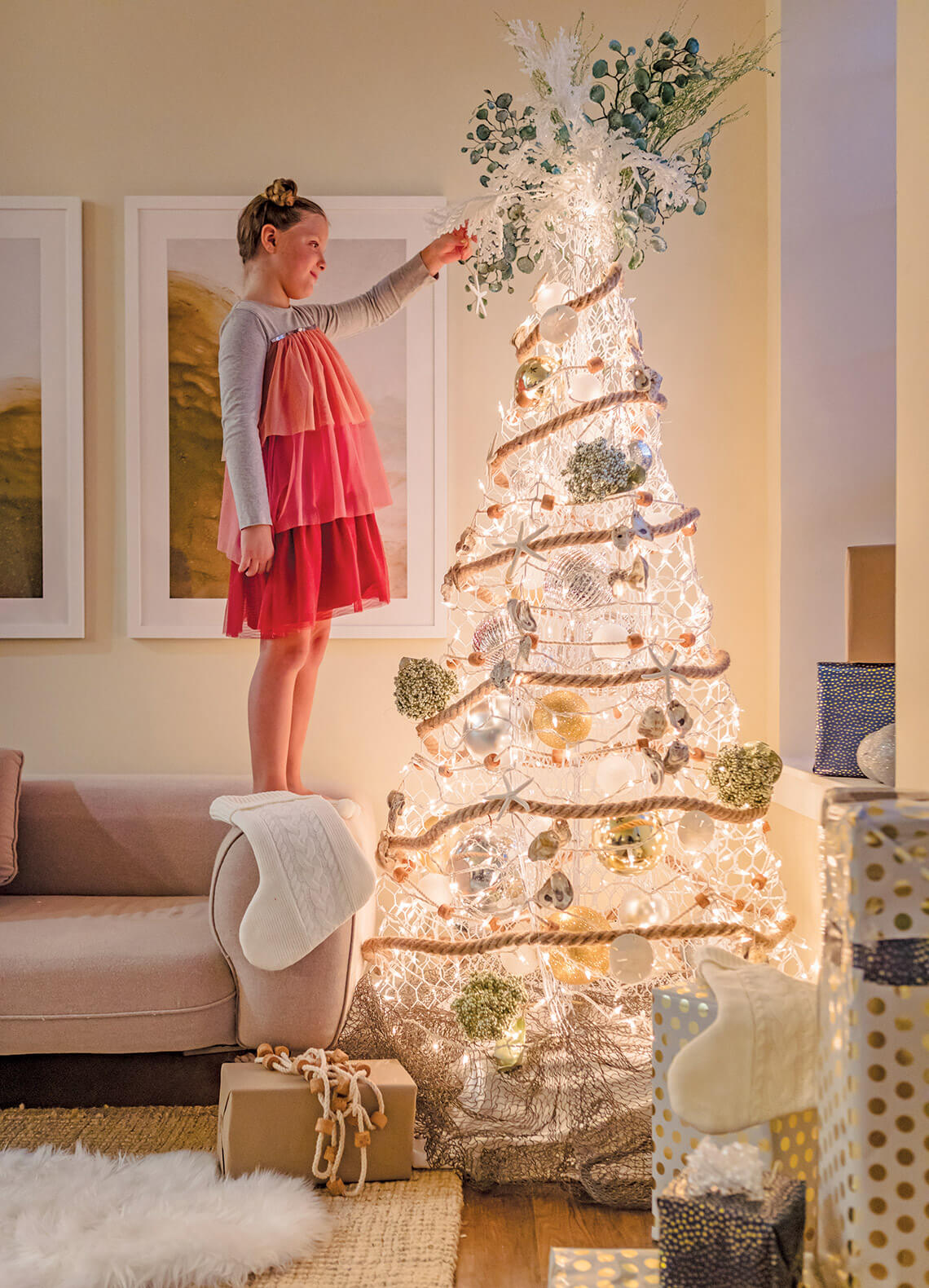 Nicky Harvey sold crab pots to commercial fishermen for more than 20 years before he started to look at his product differently. He realized that the wire mesh cubes used to trap blue crabs — a familiar sight in local fishing villages — could be cut into triangles and turned into Christmas trees. He patented his idea in 2004; since then, crab pot trees have helped families across the country celebrate Christmas with Down East flair. 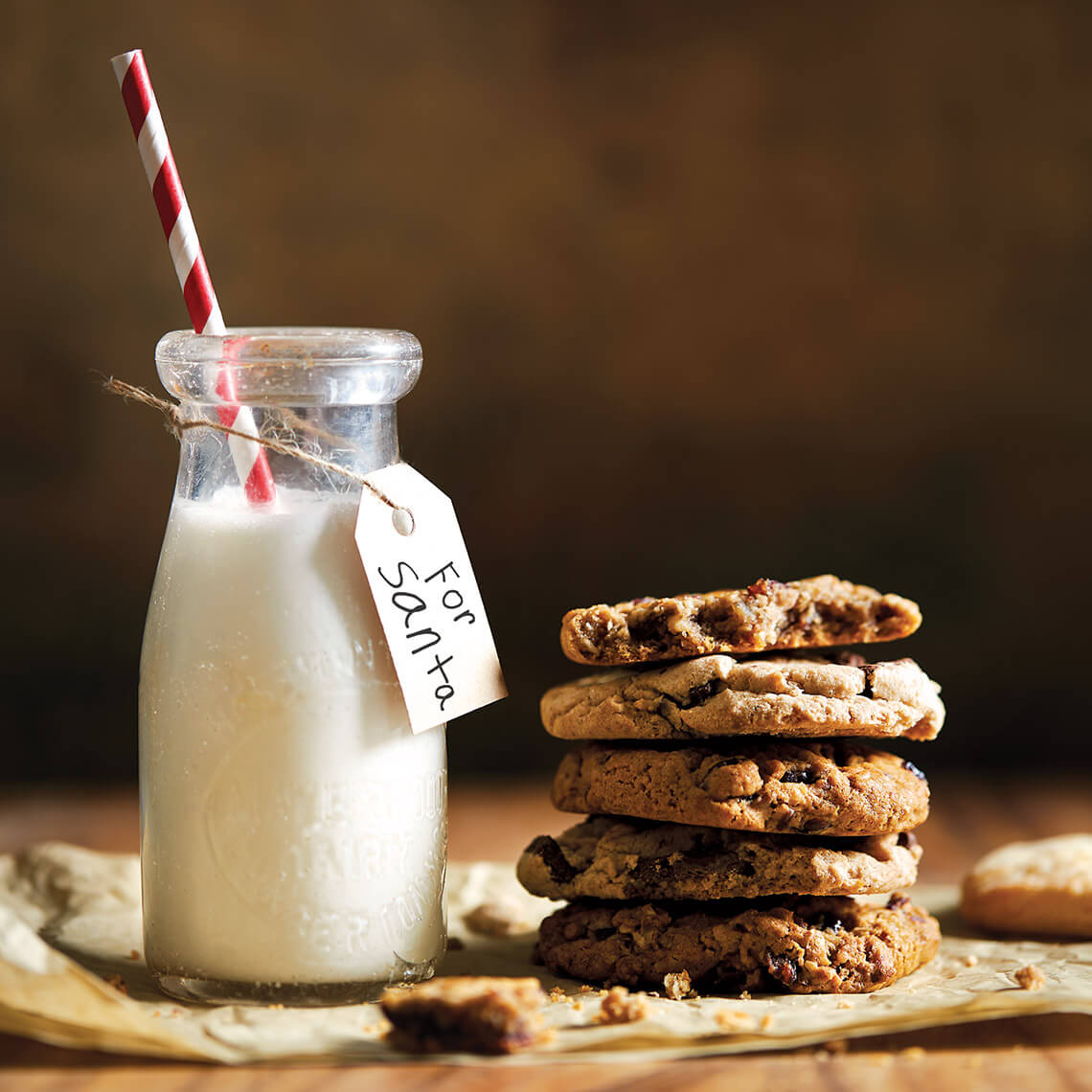 For Santa, no other drink will do. The General Assembly said so — sort of — when it designated milk as our official state beverage in 1987. That legislation recognized the efforts of dairy farmers across the state, as well as companies like Raleigh’s Pine State Creamery and Lumberton’s Maple Brook Dairy that once brought milk right to our doorsteps. 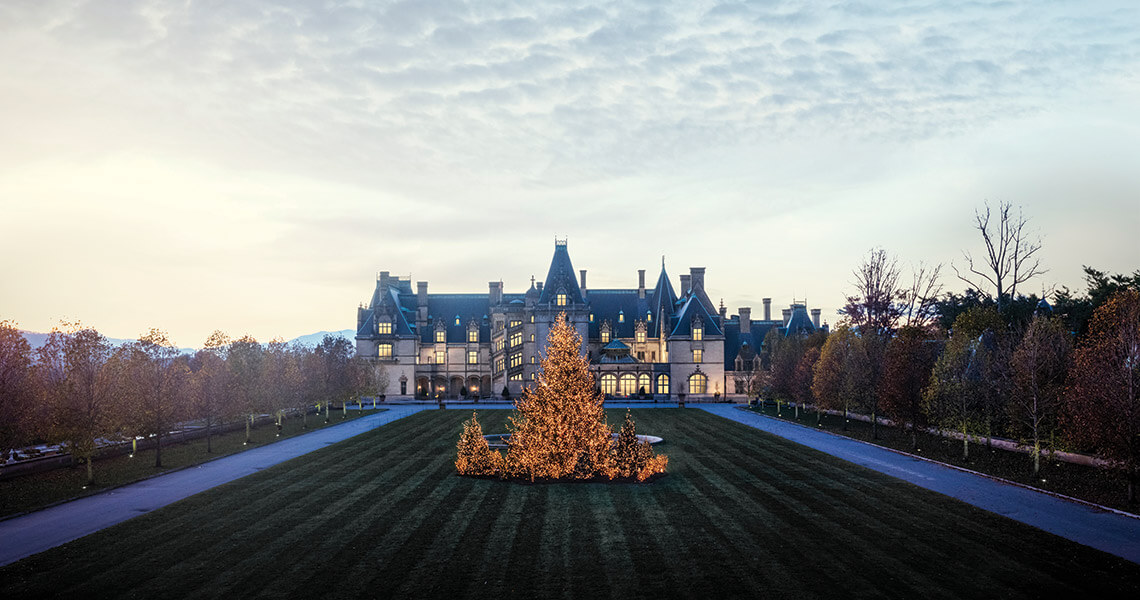 More than 220 years after 12-year-old Conrad Reed discovered a yellow “rock” in Cabarrus County, gold continues to capture our imagination. (In 2011, a fourth-grade class in Onslow County successfully lobbied to name it our official state mineral.) See how it inspires the decorations at Asheville’s Biltmore Estate each Christmas: Among the thousands of twinkling lights, you’ll find, if not gold, plenty of Gilded Age sparkle. 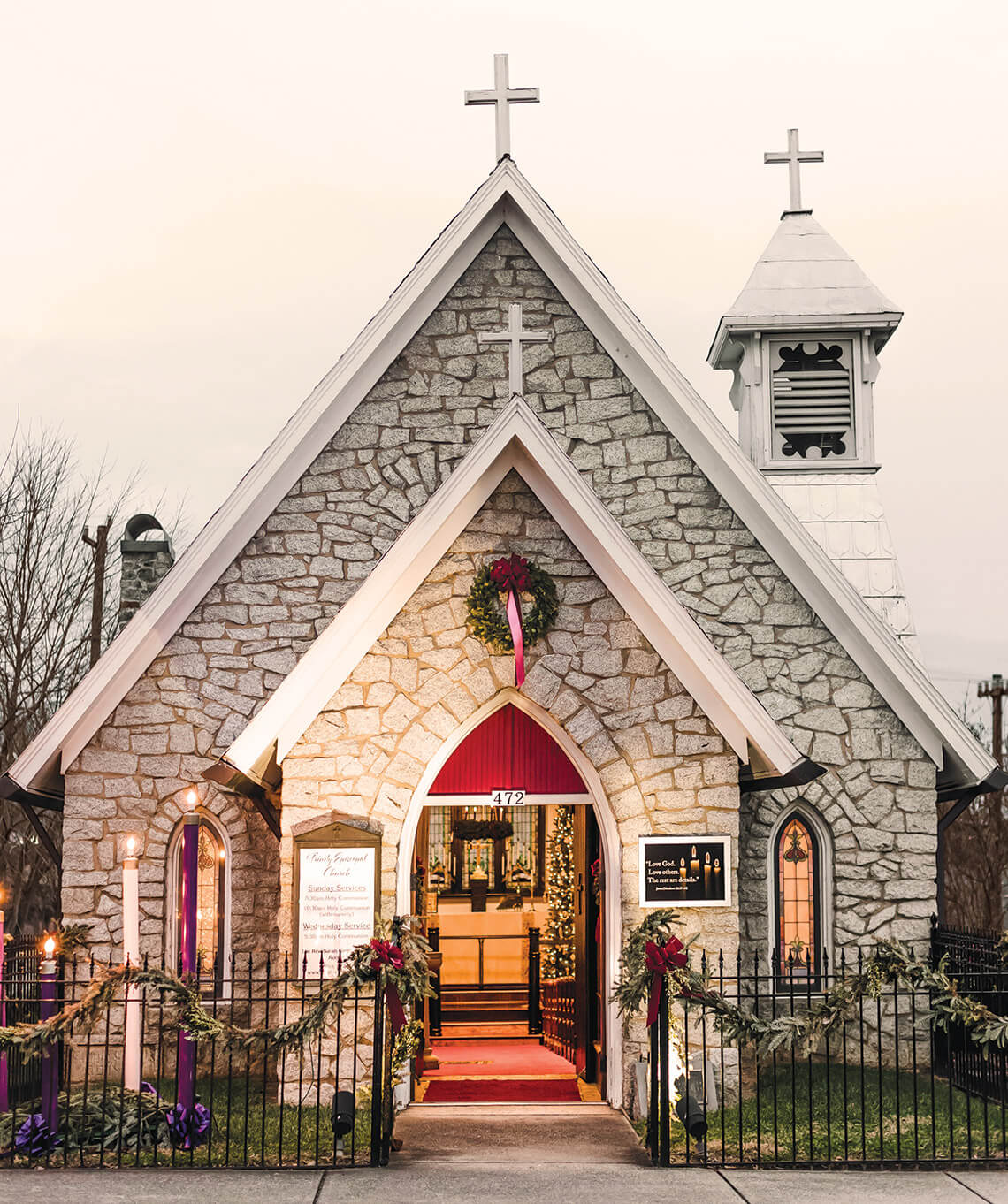 Not long after Thomas Woodruff founded his Mount Airy quarry — now the largest open-faced granite quarry in the world — he made a donation to his parish. The 1896 Trinity Episcopal Church may be the first building in town constructed of the local stone. Mount Airy granite represents our state all over the country, and rightly so: The General Assembly named granite our official state rock in 1979, exalting it as “a symbol of strength and steadfastness, qualities characteristic of North Carolinians.” 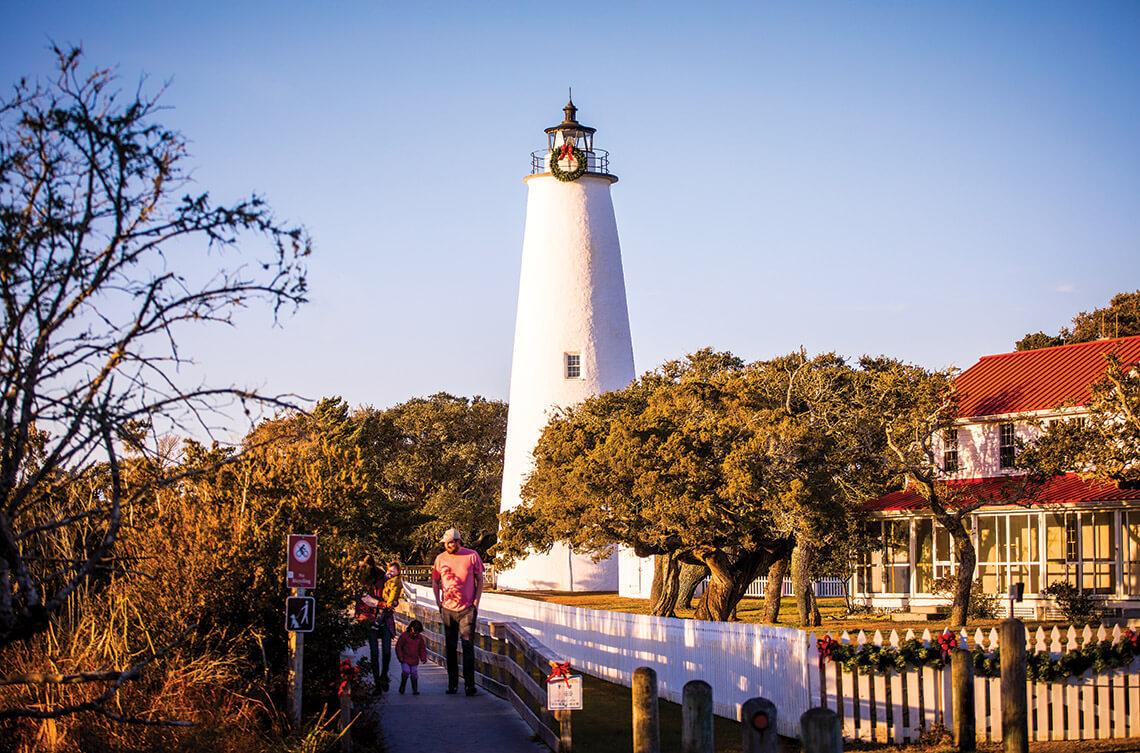 The southernmost village along the Outer Banks, Ocracoke is accessible only by boat, ferry, or plane — but once you’re there, you can walk right up to visit its most venerable resident. Like the island it has watched over since 1823, the Ocracoke Lighthouse stands apart, rising a relatively short 75 feet and wearing a distinctive salt-white coat. It doesn’t flash or rotate but shines faithfully, a constant beacon through long winter nights. 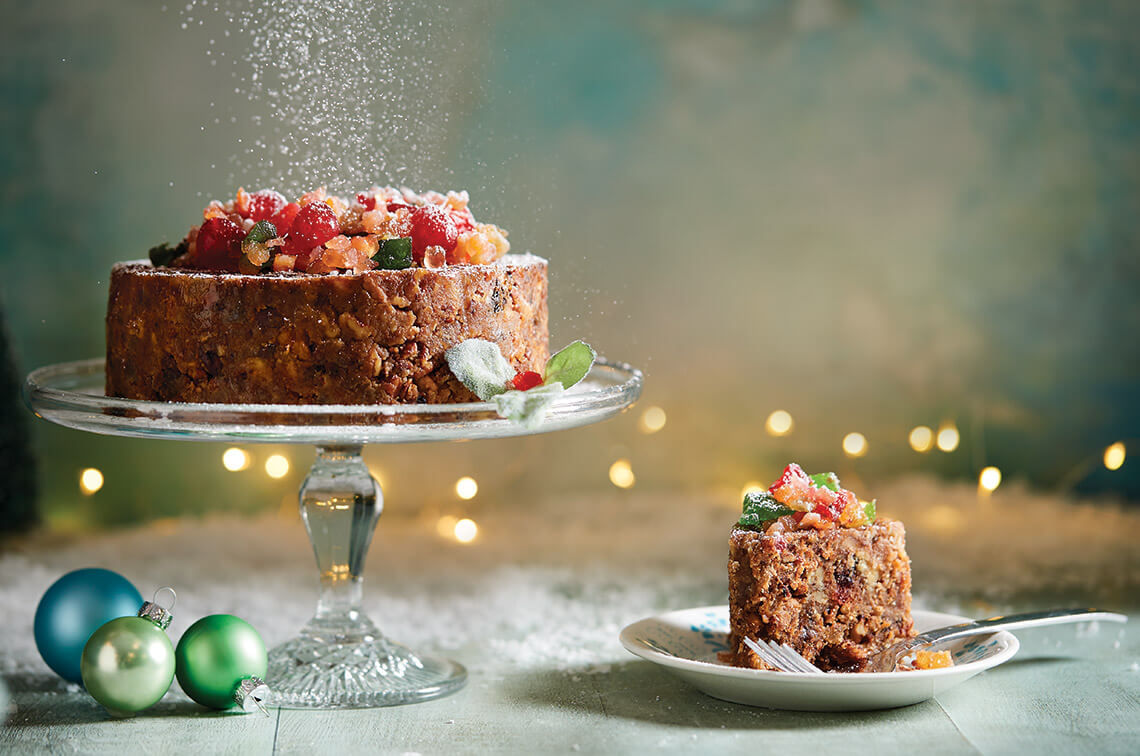 Come December, visions of walnuts and pecans — and raisins, dates, pineapples, and candied cherries — dance in our heads. More than 35 years ago, Berta Lou Scott was a hairdresser whose clients raved about the dense, nutty fruitcake she shared with them around the holidays. With help from her family, Scott turned her recipe into Southern Supreme, a thriving business in Chatham County — and an icon of Christmas in North Carolina.