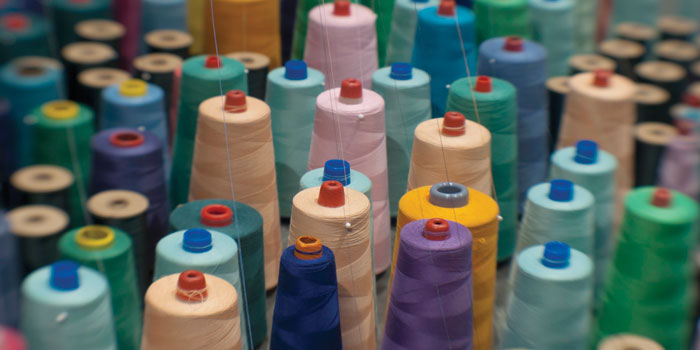 Sometimes it takes a little math to make art.

When R. Brooke Priddy, a dressmaker from Asheville, began to think about how many spools of thread she’d need to represent the state’s textile industry in an exhibit, she pulled out the calculator.

One spool of thread couldn’t equal one mill. It was more complex than that. One spool needed to equal the estimated volume of production of a region or town. This would involve addition, subtraction, multiplication, and division.

She collected her thread from abandoned mills near Asheville. Spider webs covered the machines. The windows were broken. Birds nested in the rafters. But someone saved the thread, and Priddy scooped it up.

You can see Priddy’s spools, and much more art representing the textile industry, at Cameron Art Museum in Wilmington. The museum wanted something to showcase the textile history of North Carolina, so when the director saw Priddy’s spools at another exhibit, she wanted to bring them to Wilmington.

When you look at Priddy’s interpretation, you see North Carolina. About 500 spools form the outline of the state. Their different shapes rise and fall like the topography of the land — the highest spools are in the west, the shortest in the east. Gray thread represents the mills that are no longer in production; green thread represents the mills still spinning that cotton.

But there’s hope here, too.

When she came to Wilmington to set up her representation, Priddy spent 72 hours here. She spent most of her time taking a piece of thread from each spool and tying it to an eye hook in the ceiling. Each thread had to be pulled and tied one at a time, like threading a loom.

And when you step back and look at her spools, you see all those blues and reds and greens rising from the ground, up, up, up. They stop at the ceiling, and when you see them together, you feel the potential. You know textiles can thrive again.

Sarah Perry is a senior editor at Pace Communications.