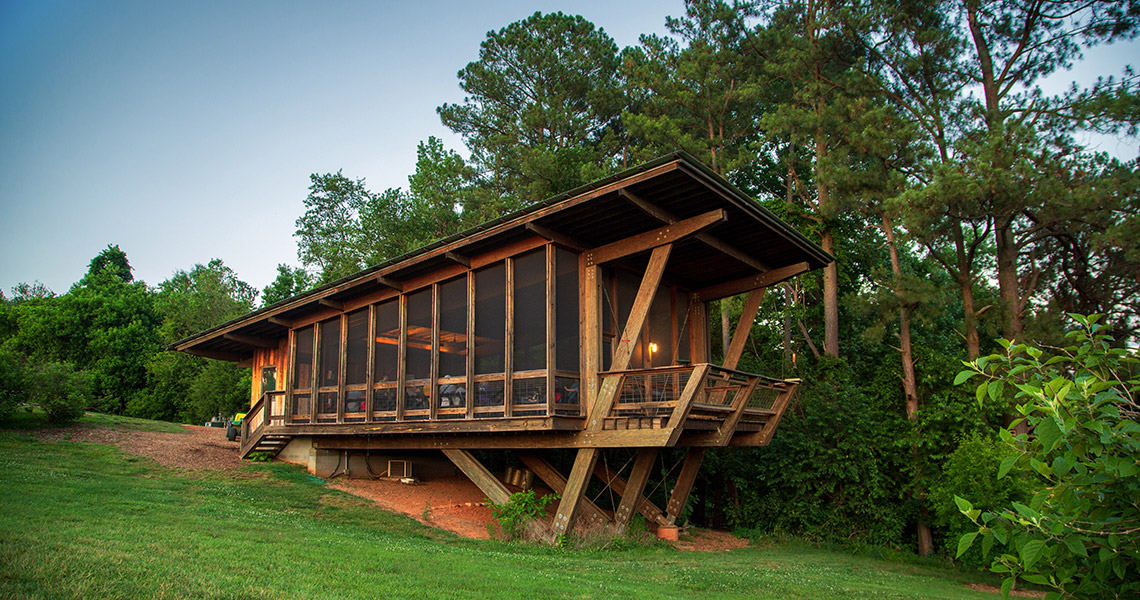 Chris Goforth saw dragonflies zipping and diving, swooping and circling above the grassy lakeside, but not just a few — 500 to 600 of them, in a place she had never seen a single dragonfly. Without that magical encounter 13 years ago, Goforth says she would still be a professor of entomology instead of the head of citizen science at the North Carolina Museum of Natural Sciences.

Goforth, who collects data about dragonfly swarms, knows that studying this phenomenon would be impossible without the aid of citizen science, an innovative but simple concept. And while sometimes innovation feels like a revolution — messy, challenging, and uncomfortable — at other times, as with citizen science, it develops organically and naturally, like a caterpillar’s metamorphosis into a butterfly.

Across North Carolina, there are places we can go to experience what happens when people shake things up. Read on for our collection of destinations showcasing Southern ingenuity in the land of the longleaf pine. 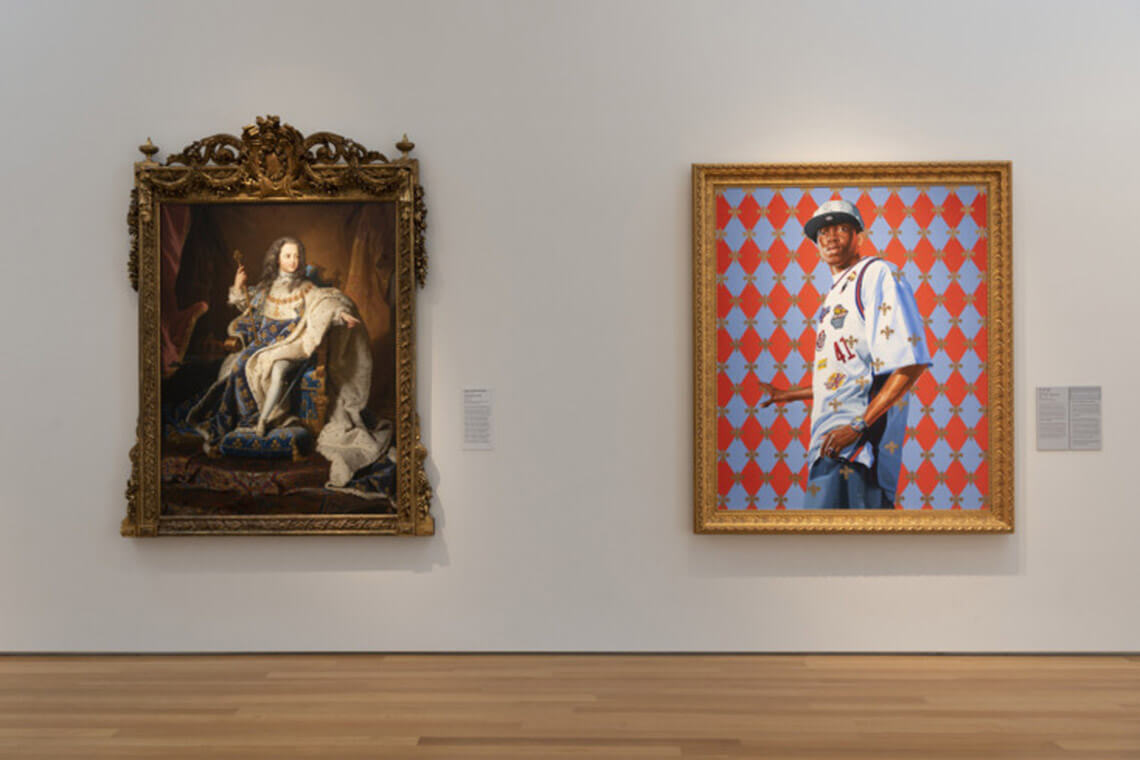 Wander through the North Carolina Museum of Art’s People’s Collection. Photography courtesy of NC Department of Natural and Cultural Resources

A transformation has been taking place at the North Carolina Museum of Art in Raleigh, and according to Director Valerie Hillings, it all started with a question. “We asked ourselves, ‘How can we make the museum more accessible for more people?’”

Seemingly simple shifts, like grouping portraits from different time periods and styles — from 5,000 years ago through today — uncover ideas obscured when the same works are displayed traditionally, based on place and period.

“When we present them in their own moment, you don’t get a sense of the fact that how we represent ourselves or who gets represented is a topic and theme that crosses time and place,” Hillings says. 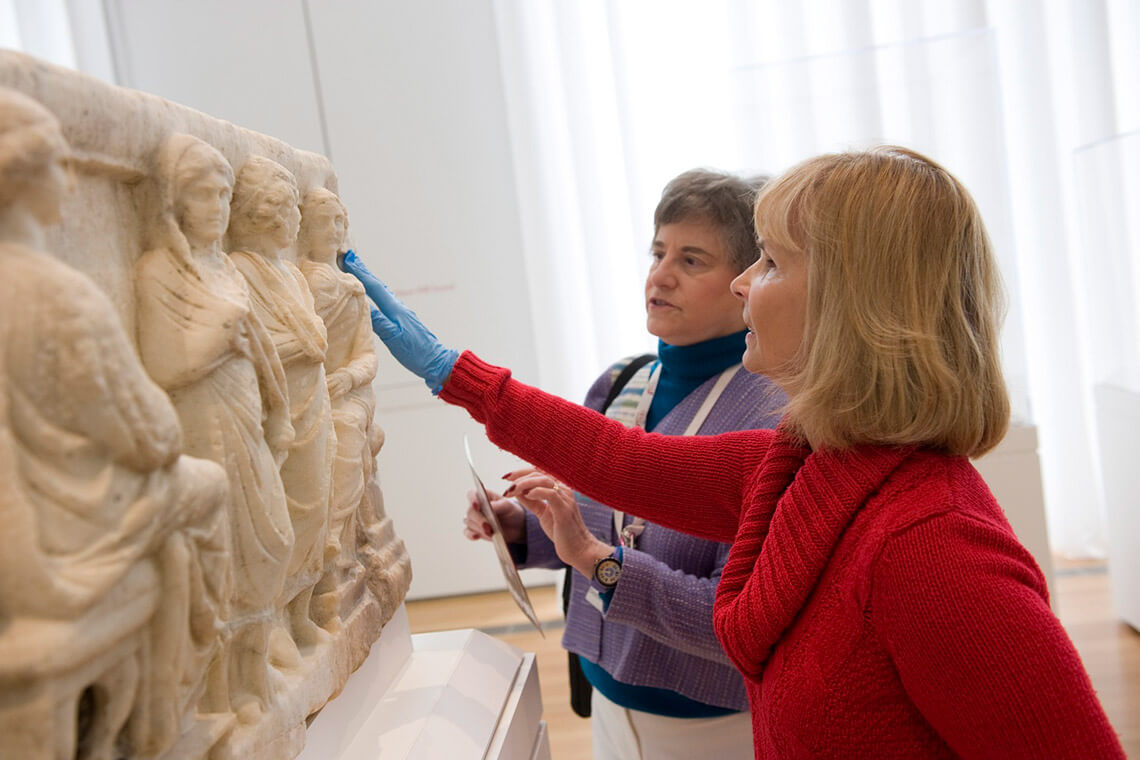 Don’t know where to start with art? Take one of NCMA’s tours for an introduction to the museum. Photography courtesy of NC Department of Natural and Cultural Resources

Now, digital and video content enhances your museum visit. Touch a digital label, and you’ll find historical context and other details about works within five galleries. Play an interactive game about 17th-century trade and travel with your family for a fun way to learn about the past.

The revamped museum has also added brand-new works, several created specifically for the museum. Enter the West Building under a set of sculptures created by Argentinian artist Tomás Saraceno suspended from the ceiling. Within the light-filled galleries of the same building, you’ll find year-long installations by North Carolina artists Elizabeth Alexander and artist in residence JP Jermaine Powell.

And rest assured; it won’t be long before the museum shakes things up again. “This collection will continuously be rethought, reshuffled, and reinterpreted, so the experience is fresh and reflective of where we are in the moment,” Hillings says.

Maybe you’ve felt the mist behind Bridal Veil Falls at DuPont State Recreational Forest, held your ears as a cannon fired at a re-enactment in Bentonville Battlefield, or shucked oysters beside Bradley Creek at Airlie Gardens’ fall Oyster Roast.

If you’ve been one of the many who have taken to the trails, rivers, parks, and nature preserves in the state in the last year, you have likely enjoyed the work of North Carolina Land and Water Fund.

“We’ve done so much; I think just about everyone in North Carolina has probably seen or walked on property that we’ve protected,” says Executive Director Will Summer.

Since its creation 26 years ago with the task of protecting water quality, NCLWF has awarded more than $1 billion in grants to projects in every one of the state’s 100 counties. “What made us innovative is that we were established as a non-regulatory program and given an unusually broad set of tools to do our job,” Summer says.

At first, NCLWF was charged with protecting streamside land, which is critical to maintaining the health of North Carolina’s waters, restoring streams and wetlands, and even repairing failing wastewater treatment plants that directly contribute pollutants to our rivers. 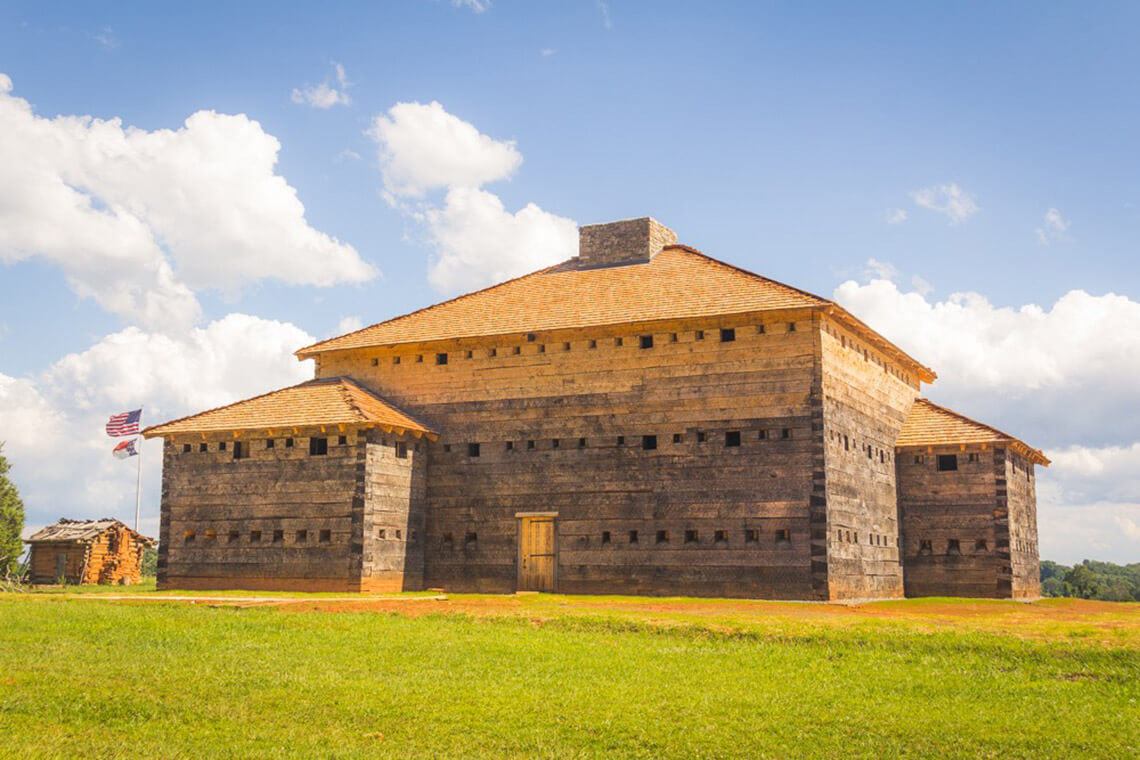 Fort Dobbs in Statesville is one of many state treasures that the North Carolina Land and Water Fund protects. Photography courtesy of NC Department of Natural and Cultural Resources

Since then, the organization’s mission has broadened to include permanently preserving the state’s natural treasures, such as rare and threatened species, like Venus fly traps along the coast, and historic and cultural sites, like Fort Dobbs in Statesville.

One secret of innovative conservation is no secret at all: good data. NCLWF uses science from the Natural Heritage Program and their team of biologists to ensure they are protecting North Carolina’s natural treasures. These biologists catalog all the plant and animal species in the state, evaluating each species for rarity and imperilment. “This helps us get the biggest bang for the buck and ensures our conservation lands benefit all species and natural ecosystems in the state,” Summer says.

In recent years, NCLWF has had a hand in transforming a swath of swamp and farmland in Bertie County — a place that may hold clues about what happened to the Lost Colony — into Salmon Creek State Natural Area.

In time, the area plans to create access for kayaking and other low-impact activities, but for now, it hosts 18 archaeological sites that have found remains of a Native American village; the plantation of Thomas Pollock, acting governor from 1712 to 1714; and what appear to be remnants of pottery from members of the Lost Colony used after leaving the original settlement in Roanoke. 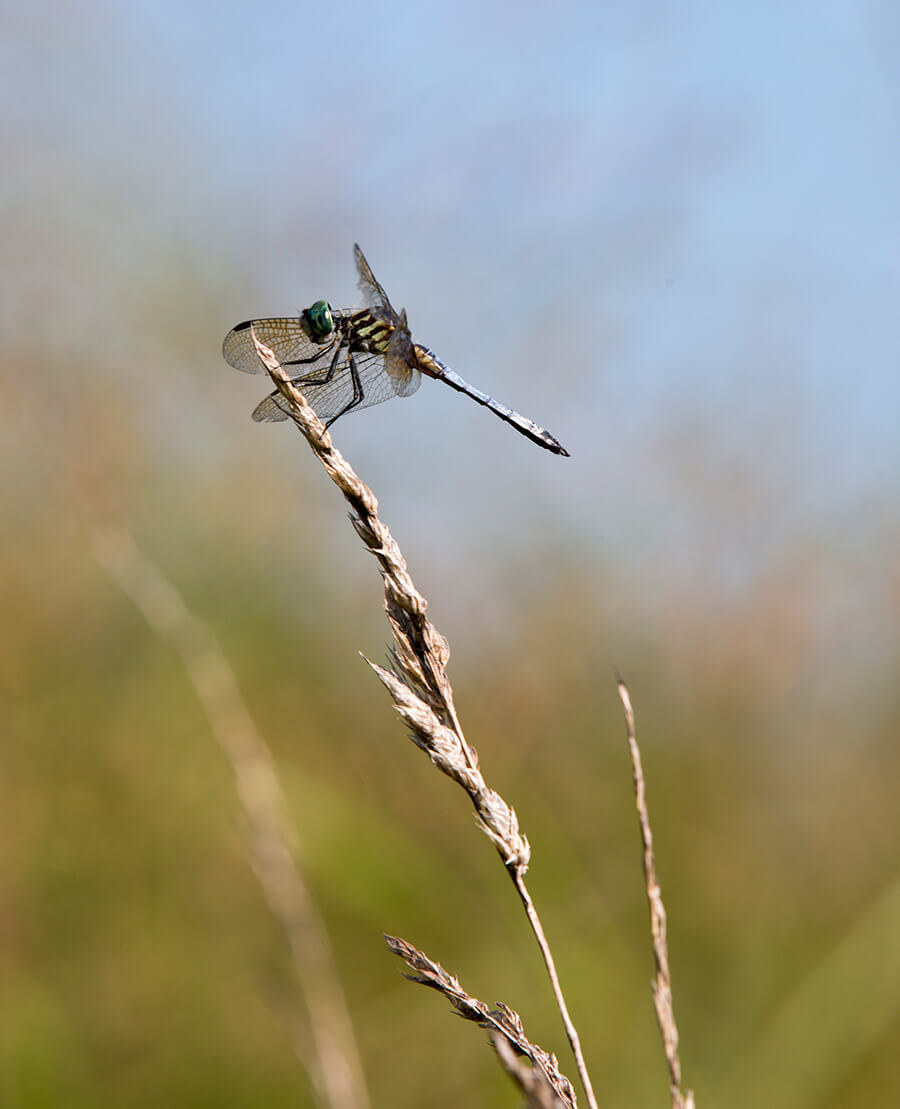 As part of The Dragonfly Swarm Project, North Carolinians share observations that help state scientists in their research. photograph by Karen Swain

Extending Research to Everyone

After seeing that first swarm of dragonflies, Goforth learned the challenges of collecting data on these serendipitous gatherings. “They pop up here and there, and you can’t predict where they’re going to be,” she says. She would need many people to give her information about swarms they happened upon to be able to gather enough data.

This is when she set up a Google form and started her own citizen science project, The Dragonfly Swarm Project. Now everyone can share observations that help scientists, like Goforth, in their research. With data from citizen scientists, Goforth has learned the importance of dragonflies in balancing the population of other, smaller insects.

She seeks out projects that appeal to different ages and interests for the museum, and most of them can be done anywhere. Researchers at the museum run some of these citizen science projects, like the North Carolina Climate Change Challenge that began in the summer of 2022. The challenge includes quarterly climate change-focused projects beginning with Nature’s Notebook, which looks at the timing of events in a species’ annual life cycle. 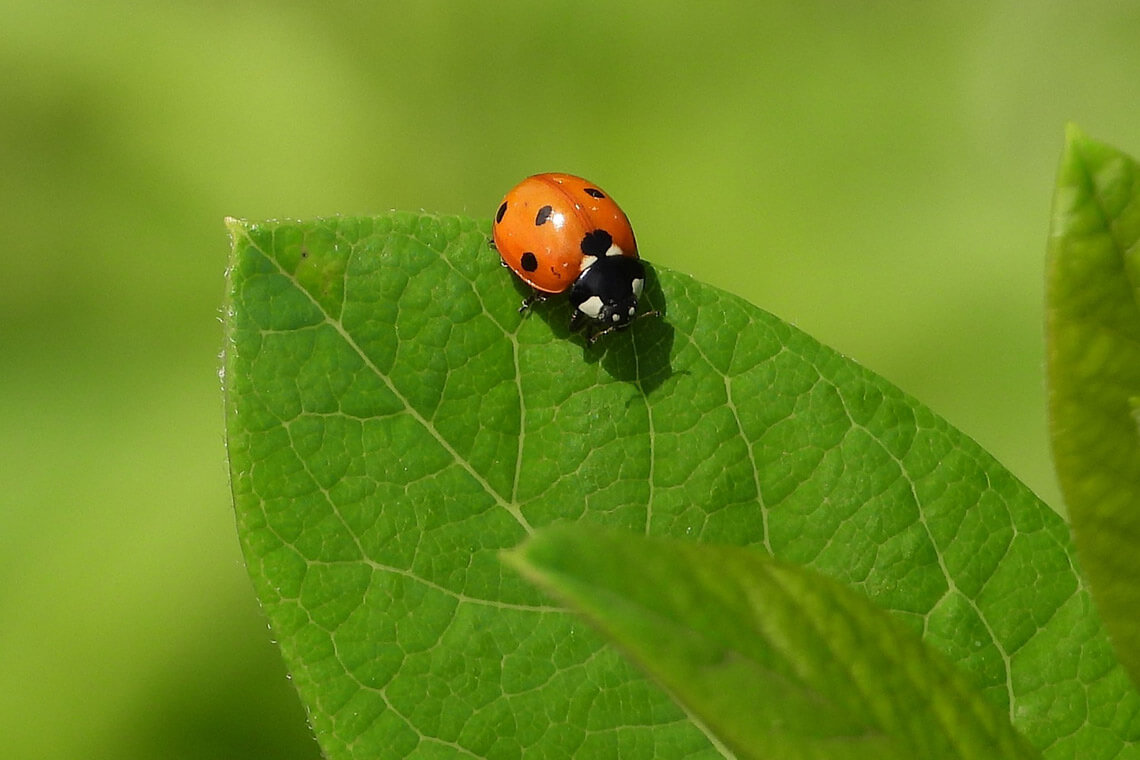 Kids can document the natural world at Prairie Ridge in Raleigh. Photography courtesy of NC Department of Natural and Cultural Resources

Many of the projects are with scientists who are not affiliated with the museum. “At our field station, Prairie Ridge Ecostation in Raleigh, we participate in more than 40 projects, and most of them are from outside sources,” Goforth says.

Among them is eBird, in which participants record observations of birds, adding to data about bird distribution, abundance, and habitat use. With ecoEXPLORE, children from kindergarten through eighth-grade document the natural world through photography and earn nature-related prizes. Participants in Monkey Health Explorer help study the immune response in primates by classifying blood cells from Rhesus Macaques.

If you’d like to take part in the innovation that’s happening right here in North Carolina, check out the museum’s citizen science page. “There is a lot of power in the amount of information that citizen science can generate that helps us answer amazing questions that are impossible to do any other way,” Goforth says. “Plus, it’s just fun to do.”