Wild horses feed on cordgrass and sea oats, dig into the ground for fresh water, and swim among the islands that make up the Rachel Carson Reserve. Unlike their neighbors on Shackleford Banks — about 130 descendants of colonial Spanish mustangs — many of these horses have a dorsal stripe, the result of the introduction of a domestic gene. In the late 1940s, Dr. Luther Fulcher, a Beaufort physician, began moving horses — including both Banker ponies, as the wild mustangs are commonly called, and domestic quarter horses — to Carrot Island. When Fulcher died, the horses remained, and they and their descendants became feral. Today, a herd of about 30 horses is protected by the state and managed by the North Carolina Coastal Reserve as part of Carteret County’s cultural heritage. 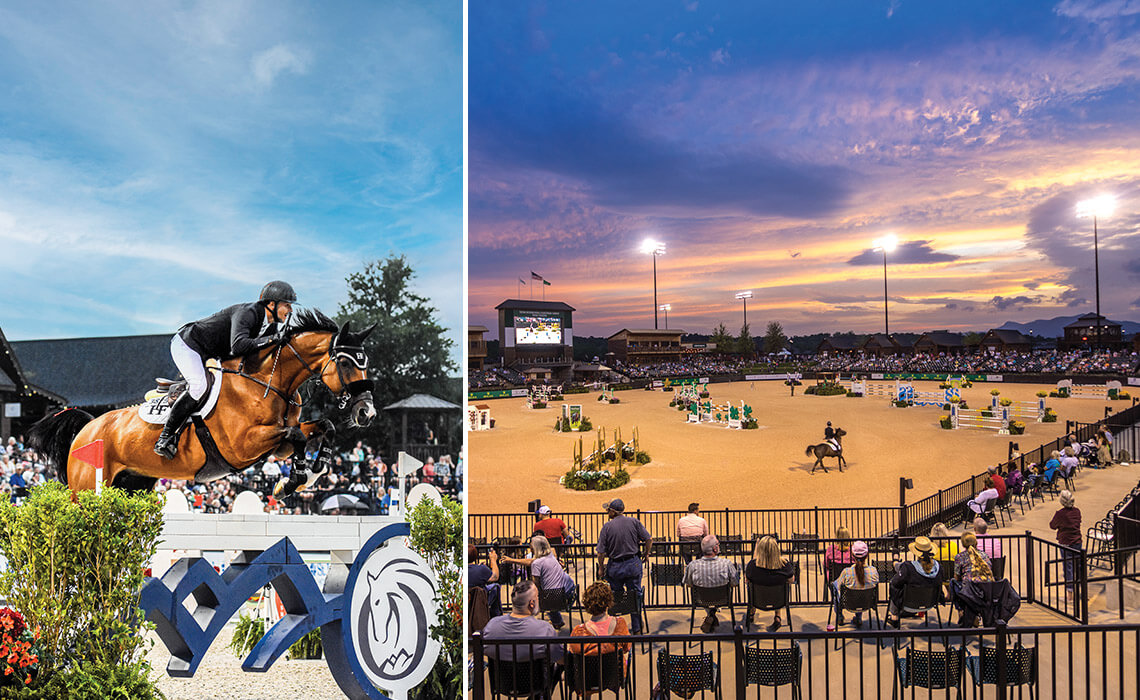 Horses canter through a twisting obstacle course, bounding between fence hurdles and leaping up to about five feet to clear them. The town of Tryon is considered by some to be the birthplace of modern show jumping, the competition at the center of the Saturday Night Lights events at the Tryon International Equestrian Center & Resort (TIEC). With 13 arenas and seven barns, TIEC is a world-class facility for equestrian events, hosting 40 weeks of Olympic-level competitions in jumping, dressage, and more each year. Most of the events are free and open to the public — on any given night, there might be anywhere from 3,000 to 8,000 spectators cheering in the stands. 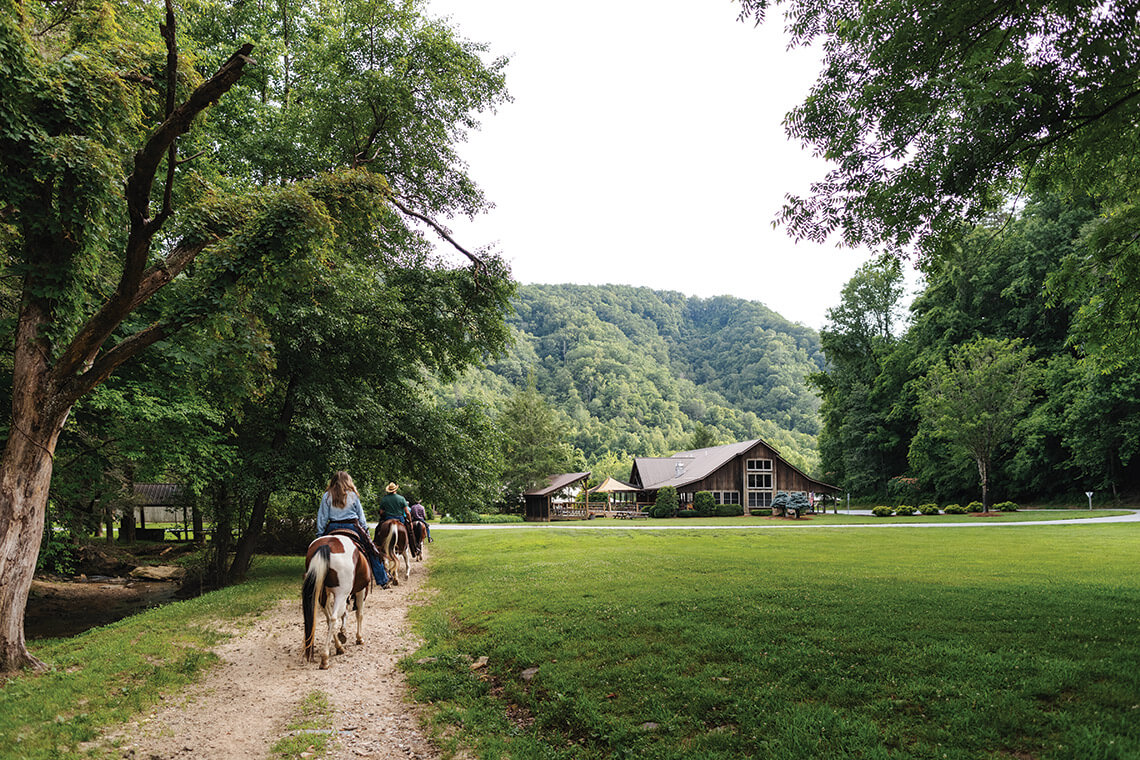 Leatherwood was established in 1986 on former rodeo grounds. For those who don’t have horses of their own, the resort offers one- and two-hour guided rides on about 75 miles of private trails in Wilkes County. photograph by Revival Creatives

There are riders who bring their horses to Leatherwood for the weekend and riders who board here permanently. There are visitors who don’t have horses of their own, who come for guided trail rides and a night or two in a cozy cabin. And then there are those who come and never want to leave, so they buy a house here. That’s what friends Phil Whitson and Phil Rash each did in the early 1990s, and in 2004, they bought the whole resort. Now, Whitson’s son Trevor and Rash’s protégé, Abbie Hanchey, who’s worked at Leatherwood since 1993, own the 115-acre resort and manage 45 short-term rental properties, from mountaintop mansions with sweeping views to the two small cabins across from the stables, where endurance riders and pleasure riders alike can be seen heading out to the trails. 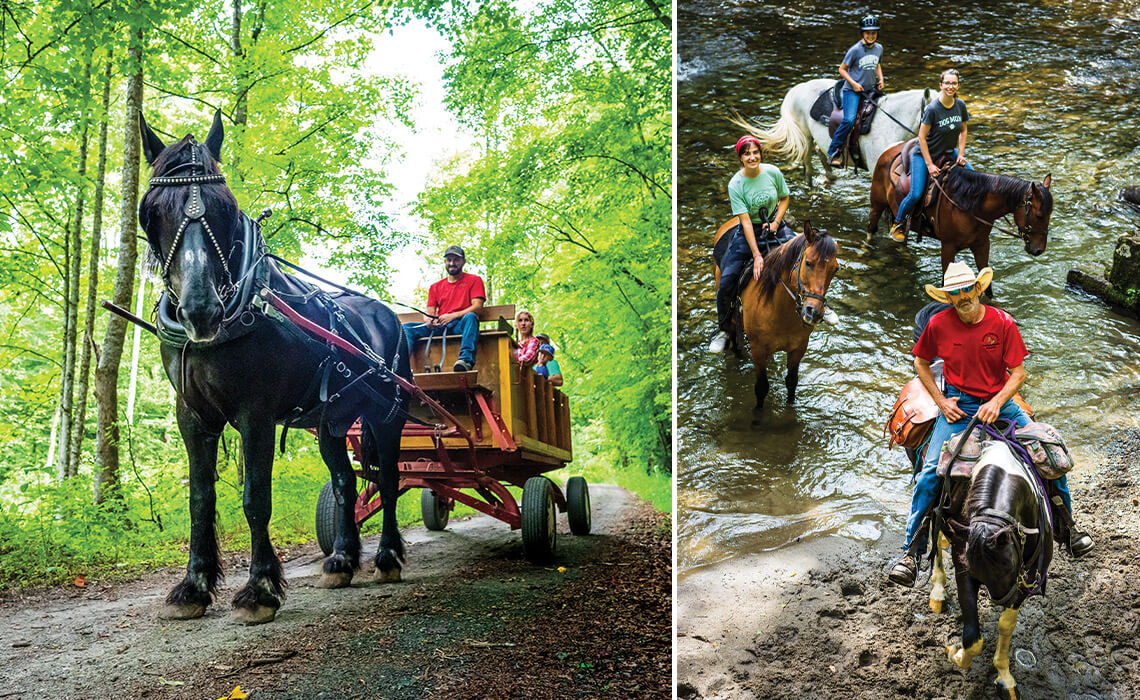 Smokemont’s wagon is usually pulled by Big Rob — at more than 2,000 pounds and 18.3 hands (about six feet tall from hooves to withers), he’s the biggest horse at the stables, and also one of the gentlest. photograph by Tom Moors

About six miles north of Cherokee, on the banks of the Oconaluftee River, the family-run Smokemont Riding Stables has been offering the only guided trail rides in the North Carolina section of Great Smoky Mountains National Park since the 1960s. From the saddle of one of their 60 or so horses, riders see the park from a different perspective as they ford the Oconaluftee and either pass through a tunnel beneath U.S. Highway 441 or stop at Chasteen Creek Waterfall. Horse-drawn wagon rides on the historic route of the Oconaluftee Turnpike, one of the area’s earliest roads, offer a glimpse into the past — and possibly a glimpse of wildlife, including turkeys or elk. 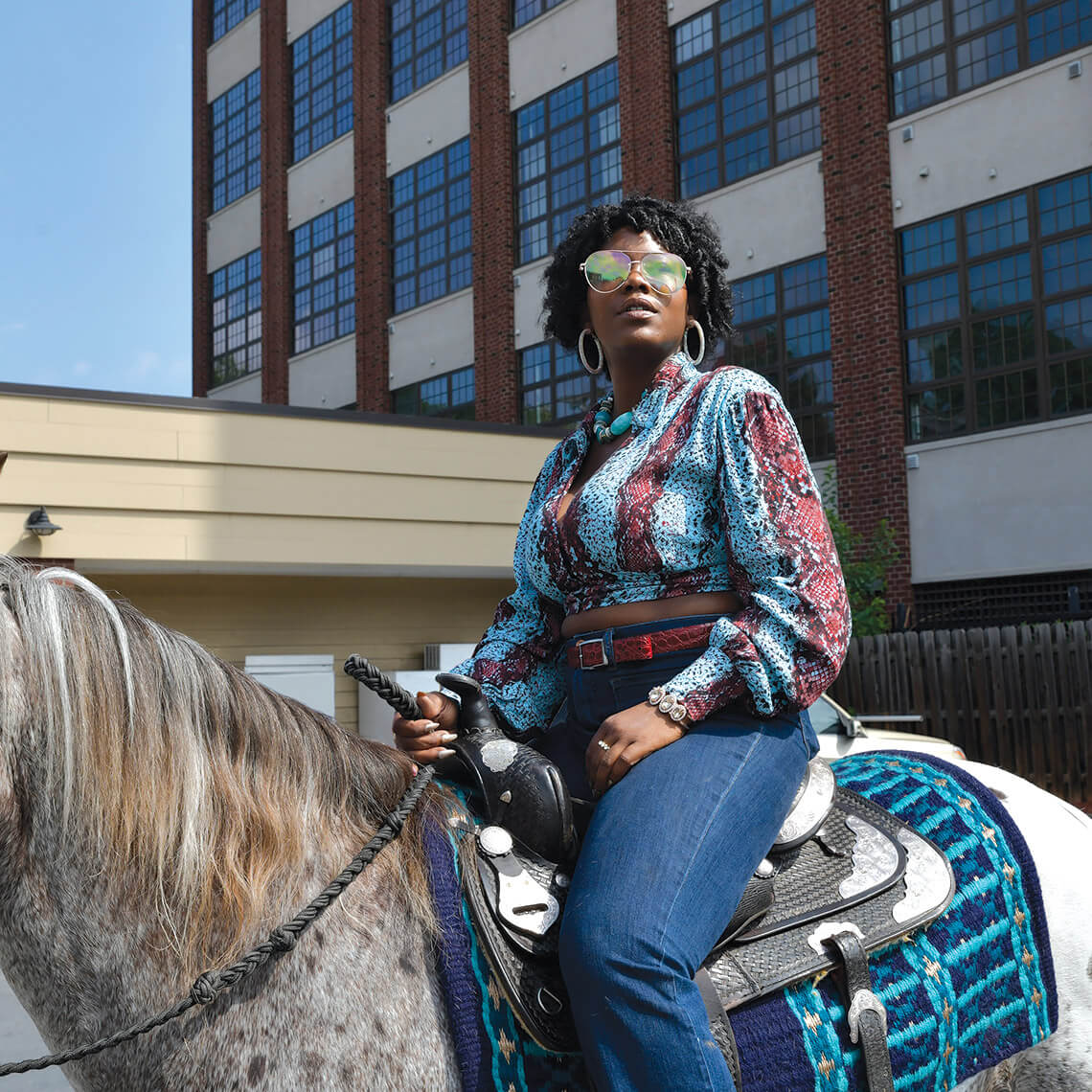 Trailbred Riderz has around 10 members ranging in age from 16 to 60, including Amber Thompson. Most members ride, but some just come to have fun and support the group, Amber says. “It’s not always about riding.” photograph by Brian Gomsak

When 100 horses parade through Uptown Charlotte, heads turn. Members of Trailbred Riderz, an urban saddle club that began in 2017, spend most of the year traveling to the countryside to ride and attend rodeos. But each April, the club hosts its city ride through Uptown, which is open to the public, and each October, it holds a family-friendly bonfire in the Mallard Creek neighborhood to shine a spotlight on Black riders and encourage others to get in the saddle. “[Riding] helps with confidence, it helps with energy, it helps with feeling, because your attention is on this 2,000-pound animal,” says Amber Thompson, the club’s marketing manager. “You’re either going to be scared, or you’re going to take on the challenge.”

Trailbred Riderz’ annual bonfire will be held in Charlotte on October 15. facebook.com/trailbredriderz 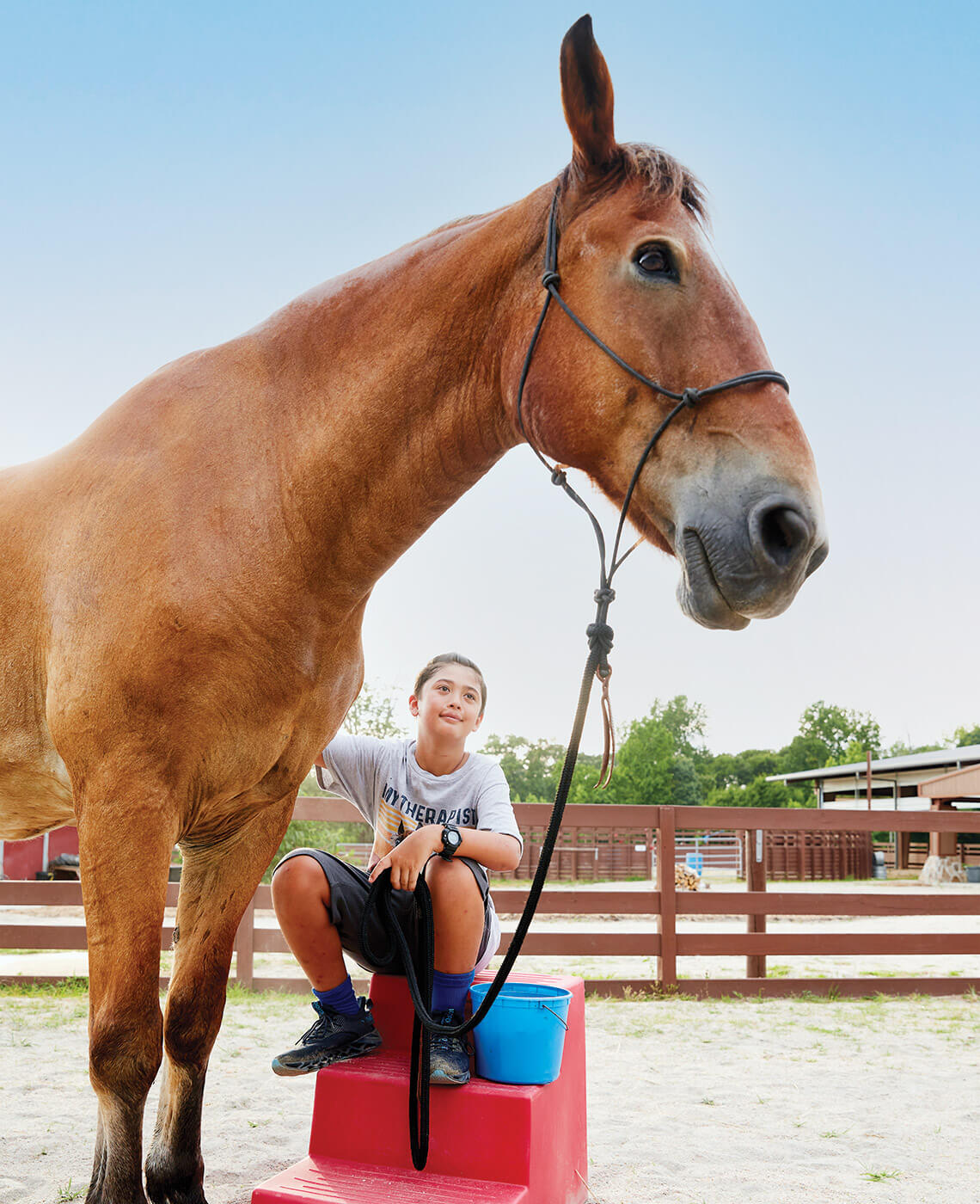 Mason Armada, 11, joined Hope Reins’ equine mentorship program about a year ago. He quickly bonded with Zeb, who was given to the Raleigh Police Department after being abandoned. photograph by Stacey Van Berkel

Many of the 17 horses at Hope Reins were rescued from abuse or neglect, but at this equine mentorship center in Raleigh, they’re the ones doing the rescuing. Since 2010, Hope Reins has, at no cost, helped nearly 3,000 kids heal from emotional trauma. Some come from backgrounds of violence or poverty, others have lost a loved one, and many struggle with depression or anxiety. By bonding with horses that have also overcome adversity, the kids learn about trust, boundaries, communication, and leadership — and both horses and humans find love and hope. 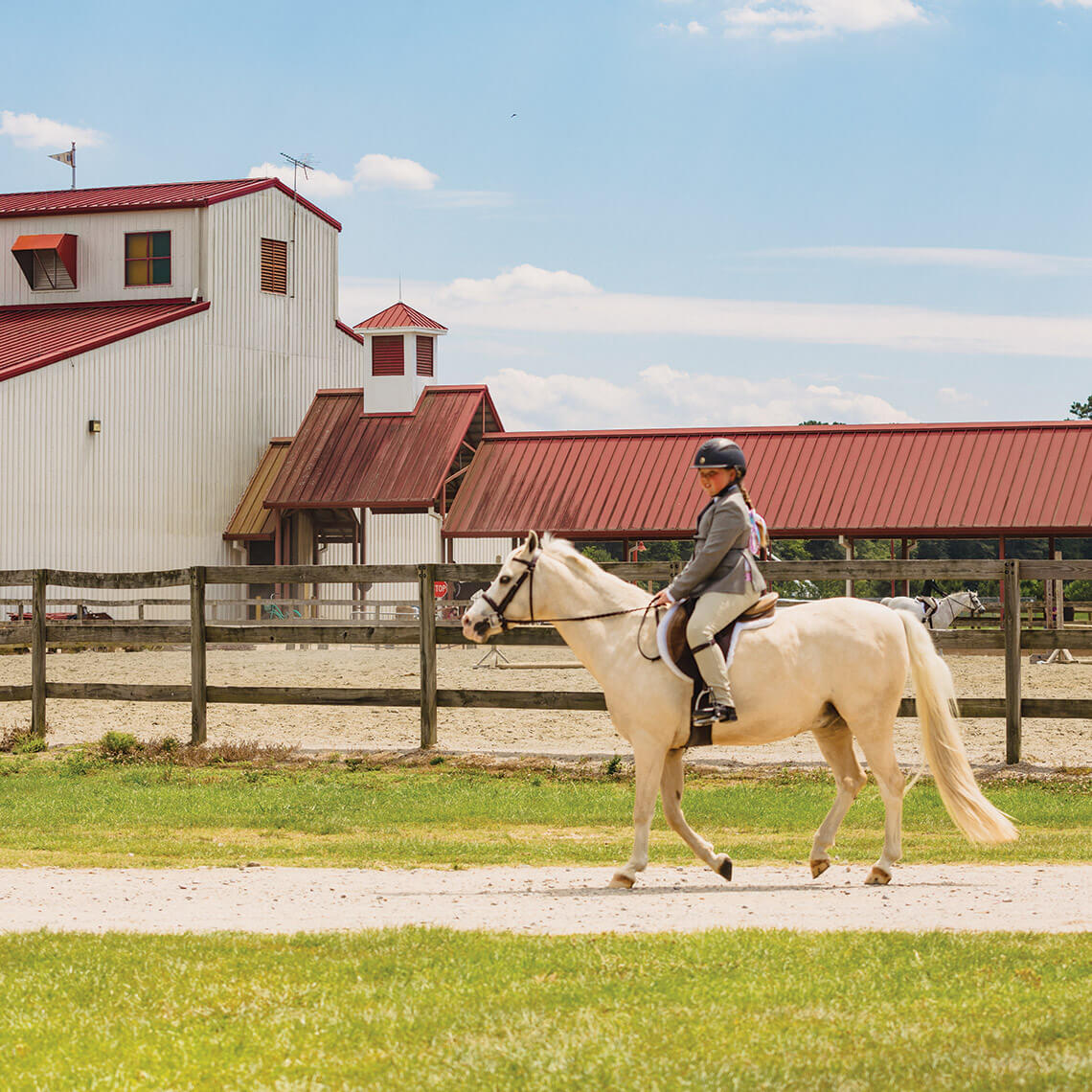 Ten-year-old Margaret Willis has been riding since she was 5. She competes in the hunter division on her Welsh pony, Arnaby Cassanova — aka Oscar. photograph by Baxter Miller

Named for former Senator R.L. “Bob” Martin, a retired farmer and railroad official from nearby Bethel who served nine terms in the North Carolina Senate beginning in 1985, this agricultural center is a landmark in eastern North Carolina. The center has become a popular venue for events like ATV and motocross races, circuses, and boat shows, but it mainly hosts horse shows in its 108,000-square-foot indoor coliseum. 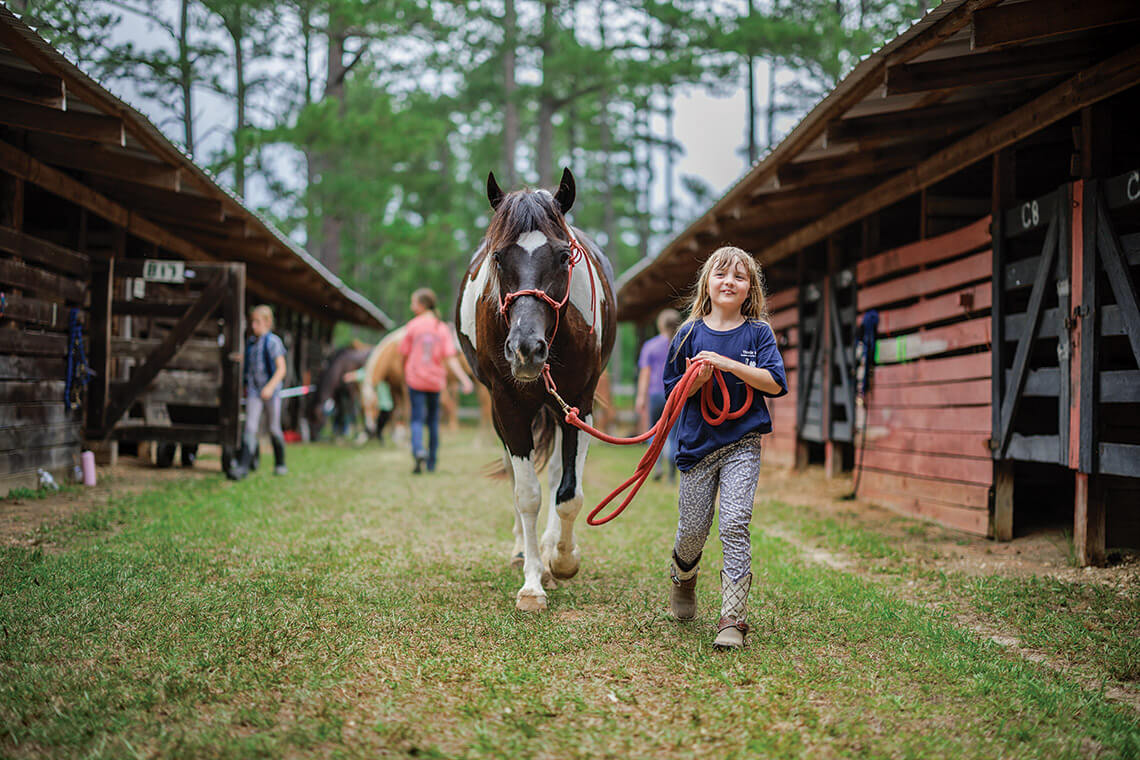 On 320 acres in the Sandhills, tucked amid longleaf pines, the Millstone 4-H Camp welcomes young horse enthusiasts for its weeklong horsemanship camp each June. The camp was constructed by the Works Progress Administration in 1938 and opened for its first group of 4-H campers the following year. For more than 45 years, the horsemanship camp has been a key experience at Millstone, educating riders on topics like showmanship, technique, and horse judging. The camp is just one part of the NC 4-H Horse Program, a statewide organization that teaches kids to appreciate their equine companions through trail rides, art and writing contests, community service projects, and horse shows. 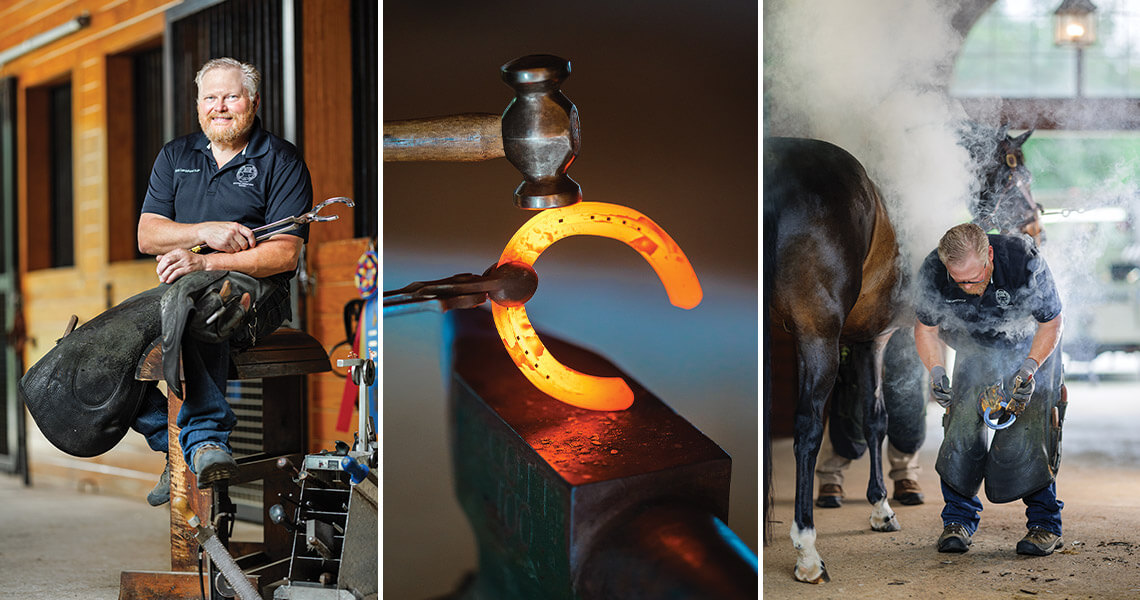 “Hot-shoeing” is when the horseshoe is heated in a forge, allowing farriers like Rick Lankford to mold the shoe onto the hoof and get a tighter seal. “If the process is done right,” he says, “they feel nothing.” photograph by Jerry Wolford & Scott Muthersbaugh

As a teenager learning how to shoe horses, Rick Lankford never thought that he would follow in his father’s footsteps as a farrier. But before applying to college, he started helping his dad out in earnest. “Within three weeks, going to school never crossed my mind,” he says. “That lightbulb went off, and I never looked back.” That was nearly 40 years ago. Now, Lankford is vice president of the NC Horseshoers Association and a journeyman farrier, the most advanced certification available from the American Farriers Association. He begins the process by removing the horse’s old shoe and cleaning and trimming the hoof. Then he forges the new shoe, shapes it to the foot, and nails it on. Finally, he clinches the nails down and sands the hoof, and the horse is ready to ride. 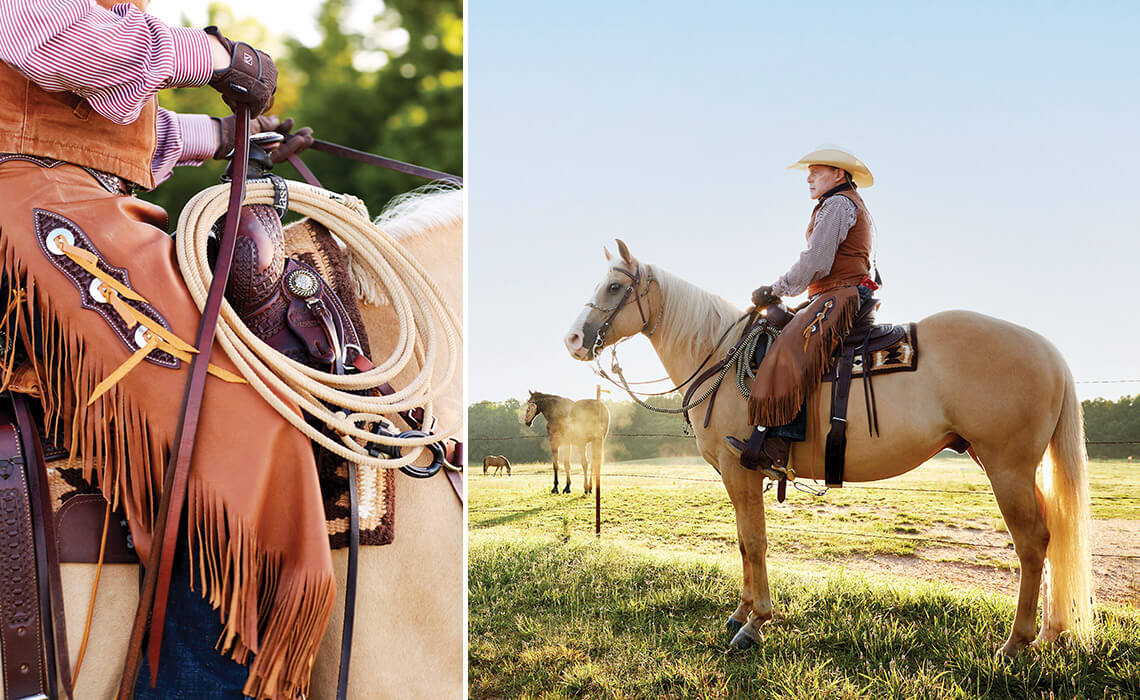 Cowboy hat, vest, chinks, and lasso: The Western-style rider’s attire is all about functionality. When Dan Stephens began riding two and a half years ago after an injury prevented him from continuing as a competitive cyclist, he knew that this was the kind of rider he wanted to be. “We all grew up with cowboy movies, but I never really had the opportunity,” he says. “This mash-up of things came together, and I decided to jump in, and I really jumped in.” Stephens’s hat protects his face from the sun and from tree branches on the trail, while the chinks — a shorter version of chaps — provide an extra layer of warmth, as well as protection for his knees when he’s wrestling calves. The Western-style saddle, unlike the smaller English-style version, has a horn on the front for anchoring the lasso while he’s roping cattle. Mostly, though, Stephens just likes to ride his horse, Sherlock, in parks and on trails across North Carolina. “There’s a wonderful feeling when you have your horse, you pick the trail,” he says. “You take care of each other.” 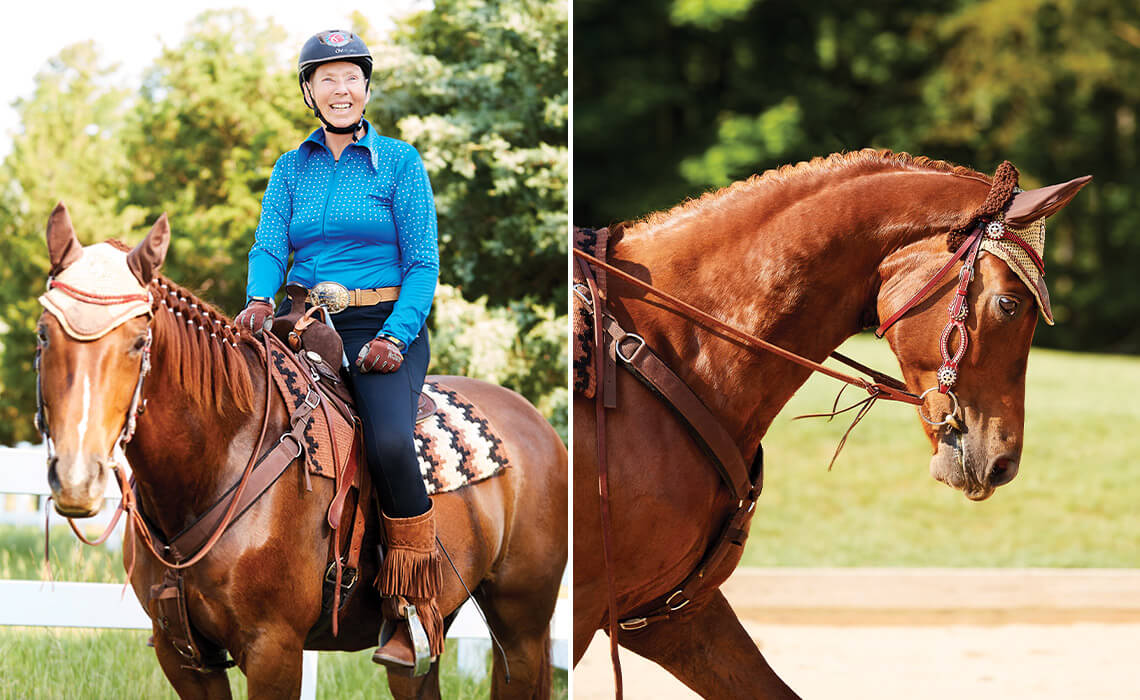 Robin Brueckmann nicknamed her horse, Sirree’Anna — a 7-year-old Hanoverian — IKEA because “she came as a kit, and I had to assemble her myself,” she jokes. “I love training young horses.” photograph by Stacey Van Berkel

When Robin Brueckmann fell on some ice and developed paralysis in her lower right leg in 1994, she wasn’t able to get on a horse for nearly a year — a devastating loss for someone who had been riding since she was 7 years old. “That was my identity, and suddenly I couldn’t ride,” she says. “I didn’t have an alternative identity.” Eventually, she learned to ride without stirrups, and she’s competed in the Paralympic Games in 2000 and 2008, as well as other world-class competitions. After having her leg amputated and getting a prosthesis in 2011, she mostly competes as a professional open rider in both classical and Western dressage, and she judges horse shows, selects U.S. International Para riders, and teaches clinics and workshops all over the world. 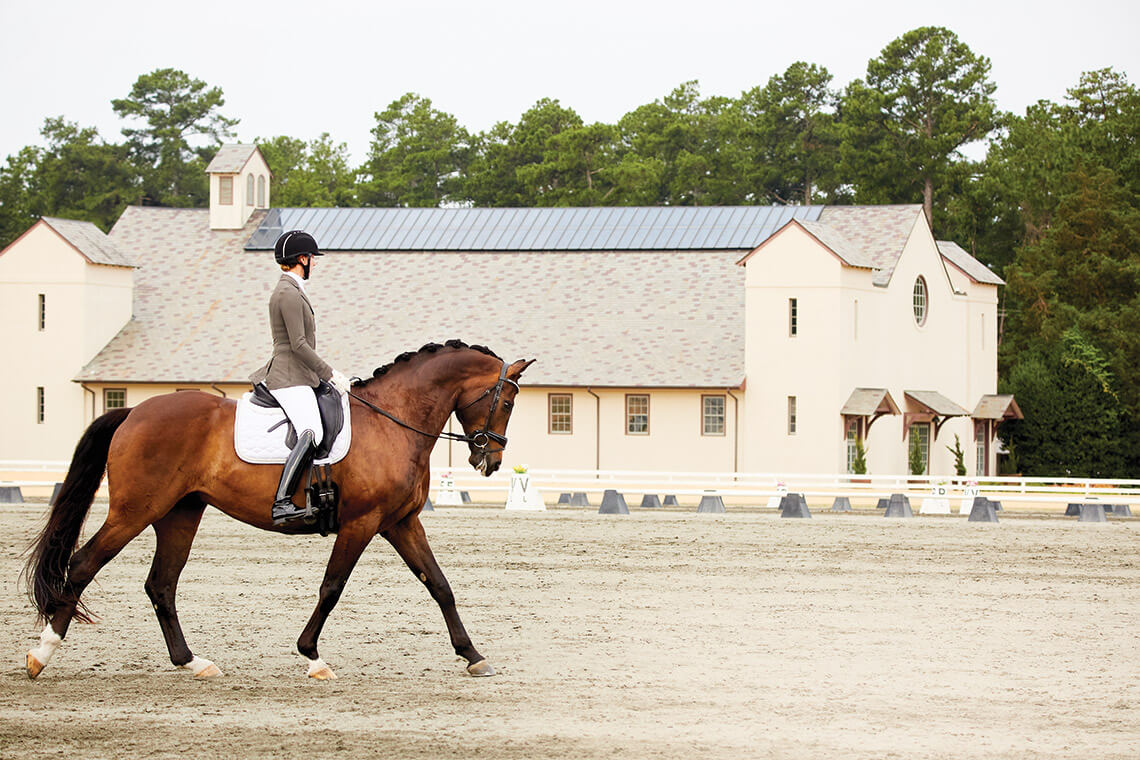 The 1917 Fair Barn is the oldest fair exhibition hall in North Carolina. It serves as the backdrop for competitions like dressage, show jumping, and harness racing. photograph by Stacey Van Berkel

Since it opened in 1915, the Pinehurst Harness Track — the oldest continuously operating equine sports facility in the state — has been a winter training center for standardbred horses, including 10 harness racing world champions. Originally built as an exhibition hall for the Sandhills Fair in 1917, the Mission-style Fair Barn served as stables for the track complex for decades. In 1992, the Village of Pinehurst purchased the building, then unused, and later began restoring it into an event venue. Today, both the harness track and the Fair Barn are on the National Register of Historic Places, and the track continues to host horse shows, polo matches, and a spring harness racing matinee, when the horses that have been training all winter show off their skills. 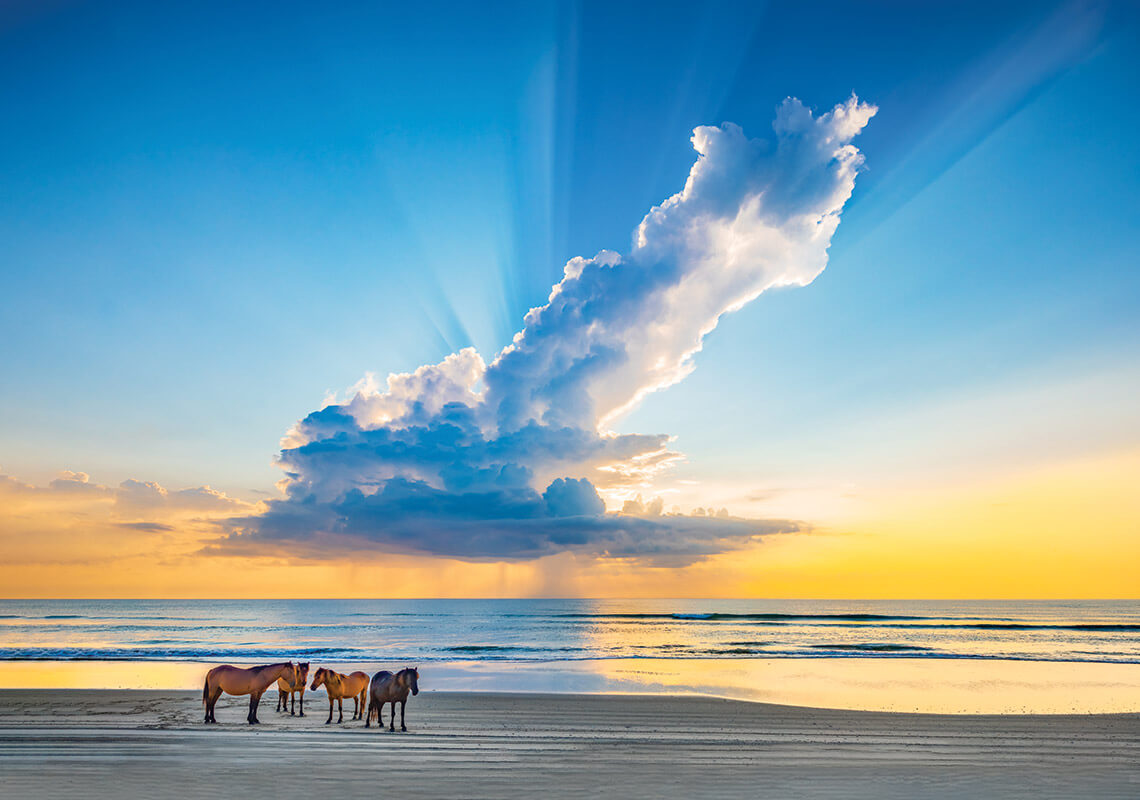 The horses that live near Carova Beach, north of Corolla, have been known to cool off with a dip in the ocean when the weather is hot. photograph by DAN WATERS/DLWATERS.COM

The wild horses that live on the far northern reaches of the Outer Banks may be small, but the commonly used term “pony” falls short in describing their incredible resilience. These hardy horses — officially recognized as our state horse — are descendants of the colonial Spanish mustangs that were brought here in the early 16th century. Some say that they swam ashore after shipwrecks or when they were cast off to lighten the loads of grounded ships. Others believe that they were simply left here, abandoned by settlers returning to Europe. However they got here, these horses have survived centuries of scorching heat and hurricanes, scarce resources, and human development. Today, they make their home in the dunes among beach houses, close to humans yet undeniably wild.