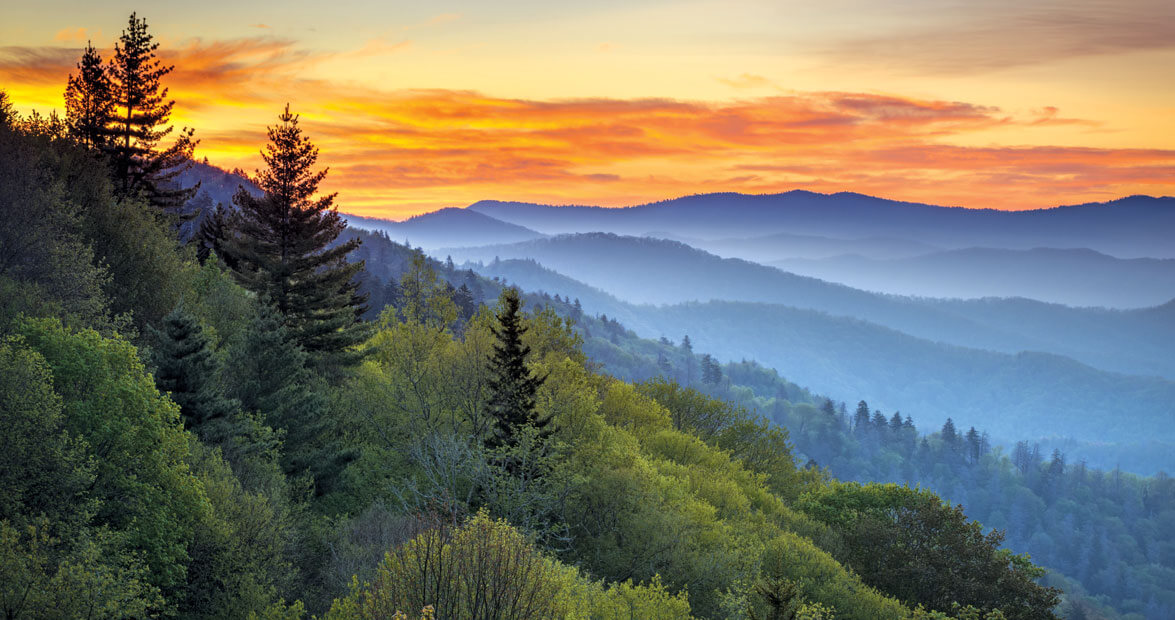 The mountains on my son’s new middle school band T-shirt are all wrong. Pointy and jagged, sharp enough to draw blood, these unforgiving peaks belong in Colorado, not western North Carolina. Sketching the Smokies requires a more fluid hand. Over the past 300 million years, the Appalachian Mountains have been polished smooth by wind and water, and even on the clearest of days, a soft blue haze blurs the landscape. “Our mountains are called the Great Smoky Range because of the dreamy haze of impalpable mist in which they are always wrapped,” the writer and outdoorsman Horace Kephart wrote in 1905.

He was speculating. An act of the North Carolina legislature noted “the great Iron or Smoaky Mountain” in 1789, marking the earliest known use of that place name, and an 1804 map standardized the spelling to “Smoky.” Those legislators and mapmakers got the name from somewhere, but we don’t know who first used it, or why.

The mountains are often obscured by rain-charged clouds, rising mist, drifting fog, and — my favorite — ragged scraps of cloud that snag on tall trees when the rest of the fog bank moves along. All of these atmospheric effects might be considered smoky. Or the name might have been inspired by actual smoke, perhaps from fires set by the Cherokee to clear their fields.

Kephart’s theory, though, seems the most plausible. The Smoky Mountains are smoky in the same way that the Blue Ridge Mountains are blue: We gaze at the peaks through a subtle blue-gray filter, and Kephart captured its beauty better than anyone. The mountain haze “lends a mirage-like effect of great distance to objects that are but a few miles off,” he wrote in Our Southern Highlanders. “The foreground of such a landscape, in summer, is warm, soft, dreamy, caressing, habitable; beyond it are gentle and luring solitudes.”

That landscape proved so alluring to Kephart that he abandoned his wife and six children in St. Louis to live in mountain solitude. His writing helped galvanize the movement to preserve the Smokies as a national park, where millions more have enjoyed the same views he once did. 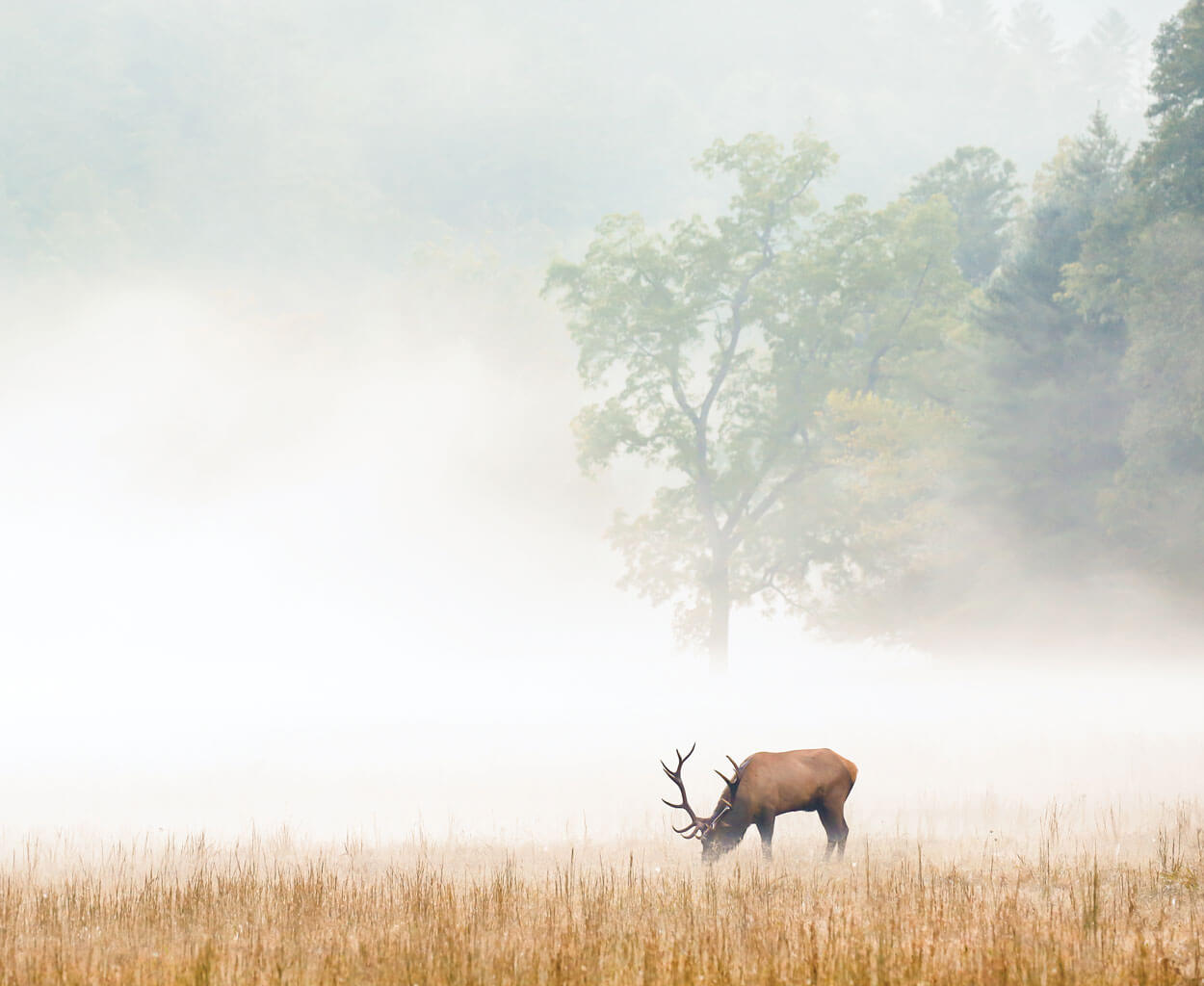 Stark against the gauzy backdrop of the Cataloochee Valley, a lone elk grazes a patch of meadowland. photograph by bill swindaman/getty images

Well, not exactly the same. Our views are much worse. Scientists can help us understand what’s changed.

“If you’ve ever torn a leaf, there’s all these little veins in it, and as soon as you tear it, tiny little drops appear,” says William G. Wilson, a professor of biology at Duke University. Those drops contain volatile organic compounds, or VOCs. Though that term is familiar from warning labels on paint cans, not all VOCs are dangerous. The compounds are organic because they contain carbon, and volatile because they evaporate. The scent of balsam needles? VOCs. Plants produce these compounds to attract pollinators, repel pests, or protect against heat stress. They’re part of the biochemical arms race known as natural selection.

“There are tens of thousands of these compounds,” Wilson says, and in the Smokies, there are tens of millions of trees, all releasing VOCs. Once in the atmosphere, VOCs react with other compounds to form particles, and those particles cause haze.

You might say that trees cause pollution, though you wouldn’t want to get carried away, as Ronald Reagan did back in 1980. “Approximately 80 percent of our air pollution stems from hydrocarbons released by vegetation,” he said. “So let’s not go overboard on setting and enforcing tough emission standards from man-made sources.”

Reagan’s numbers were dodgy, but his statement contained a kernel — a tiny kernel — of truth: Trees produce haze. But natural VOCs surely create the loveliest type of pollution, and on their own, they pose few risks.

The good news is that sulfate levels have dropped, and views have improved.

Man-made pollutants are a different story. In the decades after the dedication of Great Smoky Mountains National Park in 1940, the region west of the park filled up with pollution-spewing vehicles, factories, and coal-burning power plants. Prevailing winds carried sulfates and other pollutants into the Smokies, threatening the health of plants, animals, and people — and also impeding the views. By 2004, the Smokies had some of the worst visibility in the U.S.

The new haze wasn’t a diaphanous blue scrim that softened the vistas, but an ugly gray curtain that blocked them. “Natural haze, because the particles are smaller, will tend toward blue,” says William Malm, a physicist at Colorado State University who recently led the National Park Service’s efforts to monitor air quality. “Haze from sulfates tends to be gray.”

“If you see a blue haze, then typically you can see a long way,” Malm says. But you can’t see far through a heavy sulfate haze, and that’s a problem for a national park.

Great Smoky Mountains National Park maintains more than 800 miles of hiking trails, but most of the 11 million people who visit every year never stray far from a paved road. They come for the views — of flame azaleas on Gregory Bald in the summer or dazzling yellow birch in the fall.

“One hundred years ago, if you were looking at something five kilometers, 10 kilometers away — flowers blooming or the leaves turning — the colors would have been much more vibrant,” Malm says. “Today, you can’t see as far, nor can you see the closer landscape features with the same clarity.”

The good news is that sulfate levels have dropped as power plants shift from coal to natural gas. Views have improved dramatically over the past decade, though they remain far from perfect. 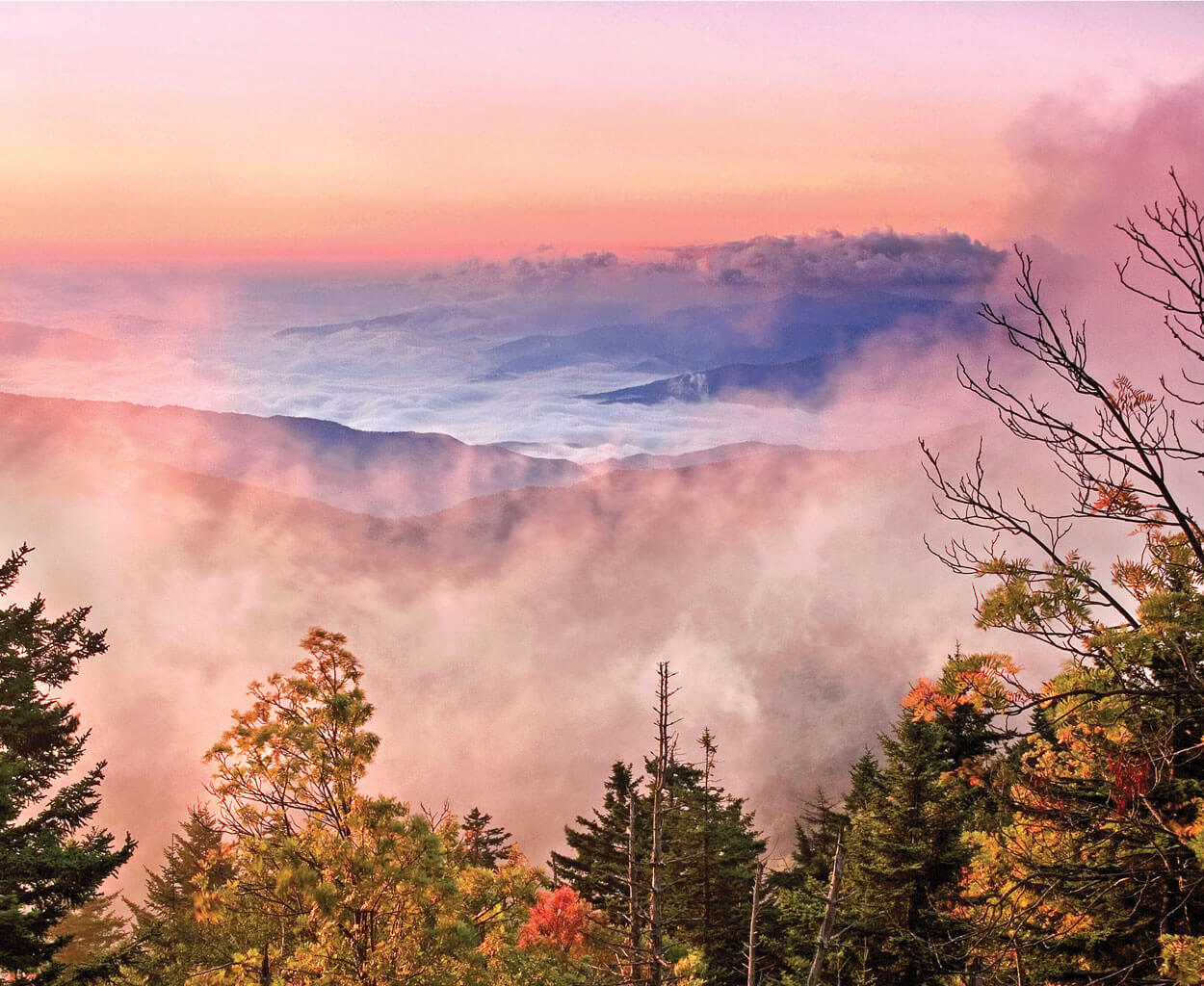 In the Great Smoky Mountains, clouds billow around the trees as if from a phantom wildfire. photograph by Scott Hotaling

With the right timing, however, you just might enjoy a Smokies view as Kephart did.

“Probably the cleanest air we’ve ever seen at Great Smokies is when the hurricanes come through,” Malm says. “I mean, 100-mile-per-hour winds — the haze really gets dispersed. So the best time to go to the Great Smokies is right after a hurricane.” He laughs and adds, “That’s tongue in cheek.”

Even so, Malm’s joking recommendation meshes with the advice of Julyan Davis, a British-born, Asheville-based artist who’s been creating beautiful, brooding oil paintings of the Southern Highlands for more than two decades.

To sketch and paint, Davis heads into the mountains at dawn or just before sunset, always keeping an eye on the forecast. “If you have a big vista, you have to know what the weather’s doing,” Davis says. “You have to be in the right place at the right time to catch the more transitory effects — storms leaving or arriving, the effects of mist and fog.”

Together, the physicist and the painter offer a guide to capturing light in the Smokies. You can’t pull into the Clingmans Dome parking lot at 3 p.m. on an August afternoon and expect to enjoy long vistas through a dreamy blue haze. Pick your moments. Rise early. Follow the storms.