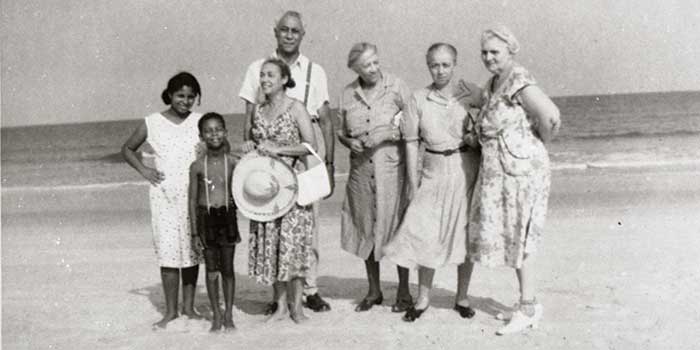 Barbara Dinkins can still taste the clam fritters: slightly salty with a hint of bell pepper and onion mixed in a top-secret, deep-fried batter.

She can still see the dancers in the juke joints, synchronized to the twist and the jerk, arms flailing and hips rotating, challenging the laws of physics through popular music.

That was the allure of Seabreeze when it was a resort for African-Americans during the Jim Crow era. The place was born out of necessity: Segregation was the way of life then. African-American men riding through Carolina Beach to access black-owned Bop City, now called Freeman Park, were required to wear shirts over their swimsuits. African-American swimmers could access the ocean from Carolina Beach on Mondays only, although it was directly across from Seabreeze.

In many ways, Seabreeze and Carolina Beach, resorts separated by a half-mile — one for blacks, the other for whites — were in different worlds. Seabreeze, a nearly two-mile strip of unincorporated hamlet, was a busy seaside retreat tucked among mossy oaks and crape myrtles. It was the place to see and be seen.

“It was like the Strip in Las Vegas,” says Dinkins, a retired nurse who grew up in Wilmington and visited the enclave as a teen in the 1960s. “Anything could happen.”

Alexander Freeman, a freed slave, was determined to make his way in the world. In 1876, he bought property at Federal Point Township, a peninsula that separates the Cape Fear River from the Atlantic Ocean. It included 300 acres of beachfront property. When his heir, Robert Bruce Freeman, died in 1902, Robert Bruce’s children inherited the land, and they cut a road into Myrtle Sound to build Seabreeze’s first homes. Even then, the area proved hospitable, with large oaks providing shade for cooks who fried fish and oysters in big pots.

Legend has it the neighborhood’s name came from fishermen who found the winds coming off the Atlantic a refreshing respite from the hot sun. With a new name, the foundation for commercial momentum was laid in 1924 when developers built The Lofton Hotel. In 1951 Lula Freeman Hill and her husband, Frank, built Monte Carlo by the Sea, a hotel and cafe that was Seabreeze’s finest lodge. With Monte Carlo came the visitors, first North Carolinians looking to spend time near the ocean, then out-of-state guests impressed by the hamlet’s growing reputation.

In the 1930s and ’40s, people flocked to Seabreeze by the thousands, riding rail, bus, and cars to flee from the uncertainty of Jim Crow, the Great Depression, and World War II. White-collar professionals, blue-collar laborers, and servicemen from nearby Jacksonville fished and caroused against a backdrop of ocean waves, music, and seafood.

“Very prominent people had a place at Seabreeze, came to meet at Seabreeze,” says Dinkins, who co-owns the seaside Ms. Bea’s Guest House with her husband, Clyde, a village native and descendant of the original developers. “They came from all over the state. The churches sent people.”

Seabreeze was home to 31 juke joints, or taverns, where jukeboxes supplied the soundtrack of American culture and attitudes. One of them, Ruth & Joe’s, was owned by Joe Farrow, who, at 84 years old, is one of the village’s few remaining commercial fishermen.

Accommodations were also plentiful for overnight visitors, who by law weren’t allowed to stay at hotels reserved for whites. Famous entertainers like Fats Domino, James Brown, and Ike and Tina Turner played for white audiences in Wilmington, but slept at Freeman Beach’s Monte Carlo by the Sea and the 25-room Lofton Hotel.

And every restaurant specialized in seafood, especially Sadie Wade’s place, where clam fritters were a nickel and drew hundreds of diners like Dinkins, who considered Wade’s secret recipe the best. The fried fish and soft-shell crabs were first-rate, too.

Other businesses followed, and also traveling carnivals. With those came more tourists and bumper-to-bumper traffic along Seabreeze Road, the resort’s U-shaped connection to Carolina Beach Road. Summers and weekends were especially busy when church groups packed buses for a day’s amusement along the waterfront, then turned the beach over to the juke joint crowd at night.

Seabreeze was good to Farrow and his lifelong buddy Luther McQuillan. As boys, they fished the Intracoastal Waterway with family, casting nets, taking homemade poles into the sound, or sitting on a pier, waiting patiently with baited hook. Someone had to harvest clams to make those well-known fritters, and kids joined the adults in hauling the mollusks.

Today McQuillan and Farrow are still casting nets as partners, and their haul hasn’t changed much. When they were kids, scores of fishermen plied their trade in wooden boats made by local craftsmen. It took six men to carry a 15-foot boat by hand across the sound and row it out to the ocean. The hauls were sold by the bunch — usually five or six fish on a string — to restaurants and seafood markets.

Today the vessels are fiberglass with outboard motors and there are fewer fishermen, but the catch — now sold by the pound — is plentiful. The Atlantic Ocean yields popeye mullet, red drum, and croaker, which Farrow and McQuillan sell to retailers. Aiming to net as much as 1,200 pounds of fish a day gives the two men plenty of time to reminisce on the water in their flat-bottom boat until sundown.

“Just good fishing all around Seabreeze,” Farrow says. “We catch a lot of fish.”

Farrow and McQuillan cast their net and bump the side of their boat to drive fish into the mesh before they head to the seafood market to sell their catch. That entrepreneurial spirit is ingrained in Farrow, who, as owner of Ruth & Joe’s, built a business and sustained it with his labor on the ocean. Everyone, it seems, had an economic connection to the enclave.

Upheaval in the air

On October 15, 1954, Hurricane Hazel blew in from the Atlantic. Hazel’s estimated 140-mile-per-hour winds and 18-foot storm surge devastated Seabreeze. The hurricane littered the sound with debris from trees torn from their roots; homes caved in or blew from their foundations. Rather than rebuild, property owners shuttered entire lots, hastening Seabreeze’s demise with the loss of businesses. One of the few reminders left from Hazel’s fury is a set of pilings that jut into the sound, the carcass of a pier that connected clubs.

“Places were destroyed, places came down,” Dinkins says. “The storms eroded land. This property used to go out much farther in 1925, about 100 more feet. It became a desolate place.”

Older property owners died and their heirs sold out or left the area completely. The last of the nightclubs, Bruce’s Tavern, closed in the 1980s, and Hurricane Fran claimed the last of the cottages in 1996.

The Supreme Court’s Brown v. Board of Education decision was the opening salvo in the desegregation of public facilities. By the end of the 1960s, federal statutes opened new options for African-Americans, who took advantage of opportunities to sleep, eat, and drink wherever they wanted. When segregation died, so did Seabreeze’s appeal to its clientele.

But the memories are still strong. Dinkins’s recollections come flooding back with a gentle breeze that recalls R&B tunes of her youth, walking the shore, and gazing out at the ocean or inland with amazement.

“Seabreeze was the place to be,” she says. “Its magic was in its memories and music.”

Herbert L. White is editor in chief of The Charlotte Post. His most recent article for Our State was “How the Spirit Moves You” (June 2013).