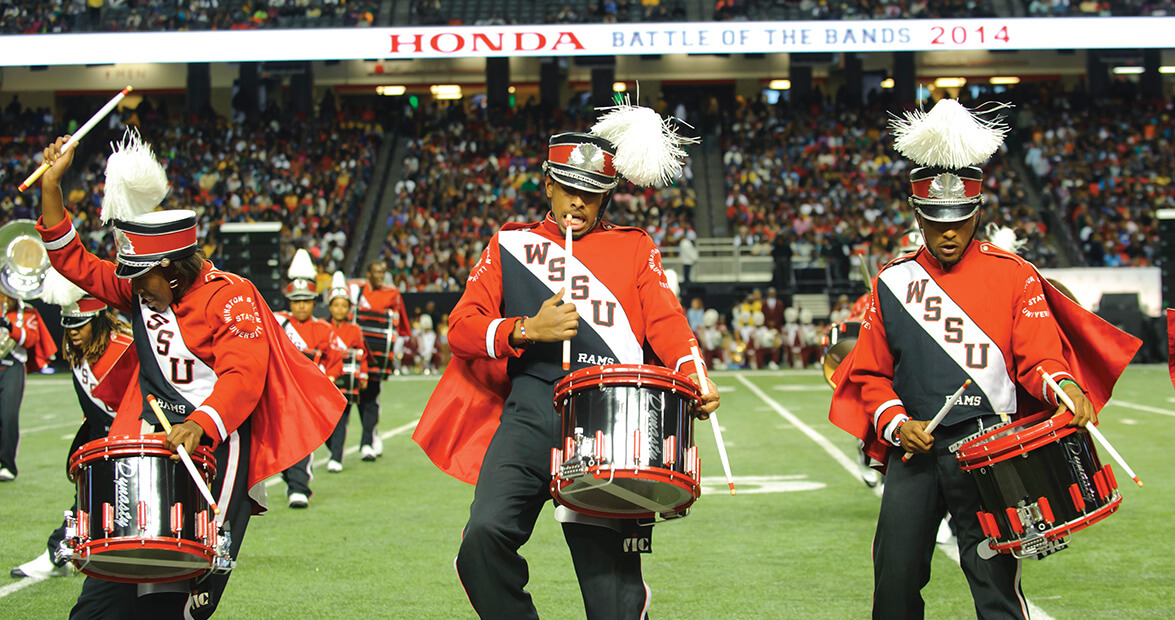 Halftime at historically black college football games means short concession lines. Fans scurry into the stands, knowing they won’t stay seated for long. Attention turns to the field, but not for a long touchdown pass or a jarring tackle.

When the athletes retreat to the locker room, it’s time for the marching bands to advance, high-stepping amid anticipation of what’s to come. For 15 minutes, cymbals crash, horns blare, and drums thump, the sound washing over the stadium with fanfare that brings everyone to their feet. Caught up in a syncopated rhythm of R&B tunes like the O’Jays’ “Backstabbers,” Maze’s “Before I Let Go,” or Donna Summer’s disco anthem “Hot Stuff,” the stands erupt in a hand-waving, foot-stomping frenzy. Football may be king in the South, but band is a worthy consort at historically black colleges and universities (HBCU’s) in North Carolina, where the spectacle rivals, and in some instances exceeds, the game.

“If the football team is doing a great job on the field, it’s going to be a battle between the football team and the band, and some people are going to show up just for the band,” says Robert L. Edwards, director of bands at Johnson C. Smith University in Charlotte.

On football Saturdays, ensembles with colorful names like Blue & Gold Marching Machine (North Carolina A&T State University in Greensboro), The Red Sea of Sound (Winston-Salem State University), and Platinum Sound (Shaw University in Raleigh) strut, toot, and sashay. Processions wind past tailgating revelers, the musicians’ shiny brass instruments glistening in the sun. Dance troupes that would make the Rockettes envious shake and shimmy to the drummers’ cadence. They’re ambassadors of school spirit, drawing alumni, students, and neighborhoods closer together. At halftime, no one is keeping score, and even the most intense competitors put aside their differences. The pageantry is worth the price of admission.

“It’s all about showmanship,” says North Carolina Central University senior Yoni McKoy, who plays clarinet for the Marching Sound Machine. “You’ve got to get out there and give people a show, something for them to be excited about.”

HBCU bands have always marched to a different drumbeat. A&T, which formed its first ensemble in 1918 with 50 musicians, is one of the state’s oldest college programs, but it soon drew the attention of rivals looking to add halftime spice. Integrating intricate marching patterns and cadences set the programs apart from military corps-style performances at mainstream schools, and the musicians’ showmanship was the inspiration for the 2002 movie Drumline, which spread HBCU pageantry to campuses across the country.

McKoy, whose older sister was a member of Fayetteville State University’s band, was hooked the first time she stepped on campus.

“I grew up going to her football games,” McKoy says. “That was the whole reason I went, and for a lot of people, that was the reason they went. The band is the way we show love to our communities.”