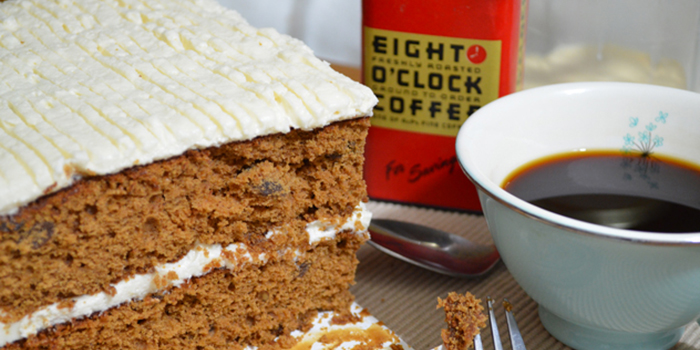 Welcome to my Spanish bar cake journey. I hope you’ll join me on this adventure as we set out to recreate a beloved recipe from the past. I’ve given it my best shot and look forward to you joining in and sharing your memories, comments, and suggestions.

Our State’s most popular recipe of the summer at has been the Atlantic Beach Pie recipe by Chef Bill Smith of Crooks Corner in Chapel Hill. Recently I was reading through the comments left on the recipe for that pie, and noticed quite a few people talking about a cake produced and sold by the old A&P Grocery Stores some years back. It was called a Spanish bar cake, and apparently lots of folks enjoyed it back then.

The Atlantic and Pacific Tea Company (A&P) began back in 1859 in New York City and quickly made a name for itself as an innovator and leader in the grocery industry. Before long, the company even began making its own brand of products, including the beloved Spanish bar cake. By the 1930s, there were over 16,000 A&P stores across the country. Sadly, in the 1950’s, A&P lost ground to newer, more modern stores, and eventually closed all its North Carolina locations.

Mama shopped the A&P store in our hometown every chance she had. She had no choice. Her oldest son, my older brother, worked there, and eventually became store manager. He worked with A&P for many years.

When I first asked my older brother about the Spanish bar cake, he lit up and started telling me all about it. He described it vividly, so I knew I’d have to make a recipe that would meet his expert approval. The pressure was on, but at least I knew I had a trusted source.

I contacted the A&P Company, still in existence with about 300 stores in the Northeast, but they never responded. Instead, I did my best to collect copycat recipes from the Internet and gain information from old A&P ads before setting out to recreate the cake.

My first attempt garnered a “6 out of 10” on my older brother’s memory scale. Not bad, but not good enough. He said it should be darker and a little spicier. This, my second attempt, rated a 7 from older brother. We’re getting closer.

If you remember this cake, I do hope you’ll try this recipe. I’m open to your suggestions, and your own memories of the cake. Hopefully together we can come up with a perfect 10.  Now, let’s get cooking!

What you’ll need to make the dish:

Before we start making the batter, let’s plump up those raisins. Bring about 2 cups of water to a slight boil, then remove from heat. Drop in the raisins and let them sit while you make the batter. This will plump them up and make for a better cake.

Start making the batter by mixing together all of the dry ingredients first. Place all of the flour and spices in a large mixing bowl. Whisk them together well.

Now, you’ll need to sift this spice and flour mixture three times. I used a sheet of parchment paper in this step. After sifting the flour into my bowl, I’d dump it out on the sheet of parchment, then place it back into the sifter. Of course, two bowls will work, so use what you have. Once you’ve sifted it three times, set it aside.

In another bowl, add in the wet ingredients according to the printable recipe. Once those have been mixed together, work in the dry ingredients in three steps. Add one third of the flour to the batter, mix well, and then repeat. The batter should be fairly thick once all of the dry ingredients are mixed in. Next, you’ll drain the raisins, and fold them in gently.

Prepare a 9×13 baking sheet by coating the inside with shortening and then a dusting of flour. Or, use a canned spray that contains flour. Either way will work just fine.

As mentioned, the batter is a bit on the thick side. Using a spatula, I worked from the center and spread the batter out into all corners so it was evenly distributed inside the pan. I also lifted the pan about 2 inches off the counter then dropped it, to force any air bubbles up to the top.

Place the pan in your oven that has been preheated to 350 degrees. The cake needs to bake 30-35 minutes or until it tests done. When done, remove the cake from the oven, and place on a wire rack to completely cool before adding frosting.

Spanish Bar Cake Frosting: I’m using some left over evaporated milk that I had, but regular milk will work just as well. This is a basic buttercream frosting. The butter needs to be softened to room temperature for best results.

Start out by adding three tablespoons of milk. You’ll probably need to add a bit more, but do this gradually to work the frosting up to your desired consistency. I ended up using 5 tablespoons both times I’ve made this frosting. You might need more or less. You’ll want the frosting to be a bit on the thick side, so be careful adding more of the milk as you go.

With all of the ingredients in the bowl, use a hand mixer, on low speed, and lower it right down into the middle of the softened butter. Start working with the butter, gradually working in the confectioner’s sugar so that you don’t send sugar flying all over your kitchen. You can thank me later for that little house keeping tip. Please don’t ask why I know this. (Smile)

If you’re making two layers from the one sheet cake layer, spread a good amount of frosting in between the layers before frosting the top. You’ll probably still have more frosting than you really need this way. I ended up with about half a cup leftover and I thought I was spreading it pretty thick.