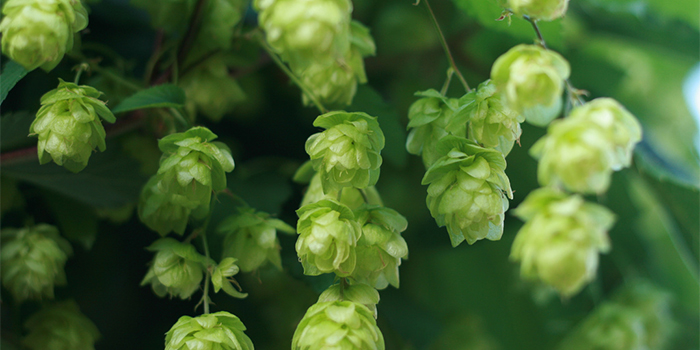 While North Carolina is a land peppered with more than 100 breweries, few of them are able to fully showcase the land itself. In the wine world, “terroir” illustrates how a particular area’s climate, soil, and geography impact the grapes grown there, which manifests itself in the glass as a distinct sense of place. Yet “terroir” is not a word often applied to beer around here, where brewers frequently source grains from Germany or hops from the Pacific Northwest.

There’s good reason to do so, especially in regard to the hop, that fragrant flower that imbues beer with its bitterness and flavors like pine, grapefruit, and citrus. Hops grow best along the 48th latitude, where the days are longer and the climate is cooler. You’ll find most of the large hop farms out in Washington or Oregon or overseas in Germany. However, a handful of hop farms have sprung up in good ol’ North Carolina, and most harvest their hops mid-July through early September. Like the state’s earliest vintners, they have their work cut out for them.

“It’s going to be like our early wine grape industry here,” Jeanine Davis, Associate Professor and Extension Specialist in the Department of Horticultural Science at N.C. State University, admits. “It’s going to be a labor of love.”

It certainly is for Davis, who works with alternative crops at the university’s Mountain Horticultural Crops Research & Extension Center in Mills River. In the same mountain town that now houses Sierra Nevada’s new brewery, she’s overseen a quarter-acre hop yard used to run variety trials on a dozen different kinds of hops that are spread out over 200 plants.

The days are longer and cooler at the 48th parallel than they are down here. Hops are daylight-sensitive plants that thrive in the sun, meaning our shorter, hotter summer days present a challenge for hop farmers.

“It kind of confuses the plants,” Davis explains. “They are expecting the days to grow. Our days never quite get long enough. We have to do some cultural manipulations.”

According to Davis, Cascade, Nugget, and Chinook varieties do well in North Carolina. But because the state’s soil differs from that of the Pacific Northwest, the hops grown here will take on a different profile than those grown elsewhere. And the differences – that “terroir” – are something Davis thinks farmers should embrace.

“The growers who are doing the best and seem to be the most comfortable are the ones treating it as such,” she affirms. “Make it special; work with your soil here.”

Hop prices are skyrocketing as demand greatly outweighs supply, and there is a clear need for more hop farms. North Carolina is home to around 80 commercial hop farms, but this pales in comparison with the industrial-scale farms of Washington and Oregon.

“Right now, with the scale we’re at, it’s just like going to a tiny organic farm to get your heirloom tomatoes,” Davis says. “People can’t expect to get the same service, volume, and prices as if they went to the big boys.”

Indeed, our local hop farmers usually pick their hops by hand as opposed to using harvesting equipment, and they don’t have the equipment to “pelletize” their hops into the format so many brewers use. Instead, they harvest their hops at the end of the season and sell them to breweries looking to use the whole-cone hops in “fresh-hop” or “wet-hop” beers. Some farms can supply enough for one or more breweries to do large batches, however, most seem to find their way into small-batch beers.

It remains to be seen whether hop farming will be a sustainable and profitable venture in North Carolina. Growing and harvesting humulus lupulus can be tricky enough in the right conditions, let alone in a state where conditions aren’t ideal. Still, Davis thinks the state’s farmers will eventually carve out an industry here, even if it takes several years to do so.

“What I enjoy about this group of farmers,” she says, “is they are a tenacious bunch. They’ve gotten into it regardless of how many times they have been told it wouldn’t work. I think most of them are going to stick with it until they get it right.”

As for Davis, the grant funds for the hop yard in Mills River run out next spring, just as the 200 plants will be starting their journey skyward. She hopes to bring on a corporate partner to help fund the yard so that it can continue to serve this developing industry. Interested partners should e-mail Davis at jeanine_davis@ncsu.edu.

To everything there is a season, including witbiers. At least that’s true for Burial Beer Co., which brews a different iteration of the Belgian style four times a year. Their Sundial Summer Wit is brewed with fresh Cascade hops from Blue Ridge Hops. The one-barrel batch disappears quickly, but perhaps this time next year, the brewery will do another fresh hop beer on their forthcoming 10-barrel system. In addition to the larger brewhouse, the folks at Burial plan to grow their own hops, herbs, fruits, and veggies in an urban farm located in the brewery’s back lot.
Burial Beer Co.
40 Collier Ave.
Asheville, NC 28801

Lookout Brewing’s John Garcia is a fierce advocate for using local ingredients, often sourcing grain from Riverbend Malt House in Asheville or hops from Hop’n Blueberry Farm, a mere 3.5 miles away from the brewery. Lookout brewed their Front Porch Pale Ale with the farm’s Cascade and Nugget hops less than eight hours post-pick. When the hops are used before they can dry, they render “wet-hop” beer (versus “fresh-hop”). If you’re looking for variety, try another wet-hop brew from Hi-Wire Brewing in Asheville, which also uses hops from Hop’n Blueberry Farm.
Lookout Brewing
103 S. Ridgeway Ave., #1
Black Mountain, NC 28711

Triple C Brewing has a few of their own hop bines growing outside the brewery. Last year, they harvested 4.5 pounds of hops to use in their Urban Hop Project IPA. This year, they doubled that amount, plucking a nine-pound medley of Chinook, Cascade, and Columbus hops from the bines. These will make up 75 percent of the hops used in this year’s Urban Hop Project Pale Ale, brewed using NC-grown malt from Riverbend Malt House in Asheville.
Triple C Brewing
2900 Griffith St.
Charlotte, NC 28203

6. YARD OF THE MONTH CREAM ALE AT TROPHY BREWING COMPANY

Many of Trophy’s beers are named after accolades, and Yard of the Month is no exception. It’s a nod to lawnmower beers, those lighter beers best consumed after spending a hot day working in the yard. This cream ale certainly qualifies. It’s brewed with stone-ground corn from the Historic Yates Mill and fresh Cascade hops from Farm Boy Farms in Pittsboro.
Trophy Brewing Company
827 W. Morgan St.
Raleigh, NC 27603

Daniel Hartis runs CharlotteBeer.com and writes the “Beer Here” column for the Charlotte Observer. His first book, “Charlotte Beer: A History of Brewing in the Queen City,” was published in 2013; his second, “Beer Lover’s The Carolinas,” hit shelves in April 2014.