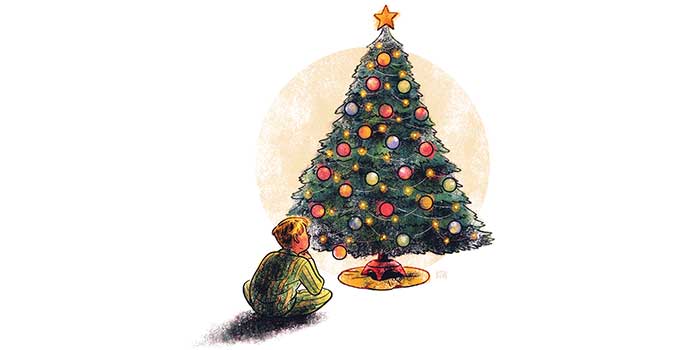 My mother insisted on a Fraser fir at Christmas. No other tree worth having, was her belief. And we boys knew the drill: Choose the right tree, rooftop it home in its secret-seeming netting, watch my father baby that same string of lights back to life one more impossible time. Achieve, in the stand, something approximating vertical and plumb.

For dinner, we’d eat crackers and hard cheese and salami and pickles. Sardines from a can. That was the only night all year we ate anything like that. Tree dinner. We’d always done it. No other reason. Ours was a family of fierce ritual.

I work hard all year at what I think is a successfully curated cynicism, but that falls completely apart come Christmastime. I will sing along with Bing Crosby’s “Silver Bells” in the frozen-foods aisle. I will stay up well past anybody’s bedtime to weep through the end of It’s a Wonderful Life. I have gone and will again go a-wassailing.

But I learned well: None of that matters as much as the tree. The tree is the center of the whole enterprise.

For one thing, it comes at the right time. Decorations can appear like unfortunate growths in big-box stores as early as mid-October, but tree lots spring up across the city on Thanksgiving weekend, and no earlier.

See them in the corners of grocery store parking lots or the half-fields off to the sides of gas stations: There is the split-rail fencing, there are the bare bulbs strung between two-by-four poles, there are the trees in their fine rows. Maybe there’s a camper where whoever’s running the show sleeps at night. Maybe there’s somebody making wreaths in a tent. Maybe it’s finally snapped cold, and there’s a fire going in a 55-gallon drum.

Surely it’s cheap to use a word like magical to talk about the yearly late-evening trip my brothers and I so looked forward to, the three of us racing through the trees playing breathless unscored games while my mom and dad fought gently about the shape of this one and whether there was a hole in the back of that one — but what other word is there? The Christmas tree lot is another world. Here is a forest come down from the mountain.

And the trees on those lots? Fraser firs. All but one or two rows, in my general experience, which is no real surprise — upward of 50 million Frasers are being grown in North Carolina at any given time. An ocean of fancy industry promotional material takes pains to mention that the silver undersides of the unusually long-lasting, blue-green needles provide an unmatched glow when introduced to, say, a Christmas light.

But here’s a word of advice, Fraser firriers: Just tell folks it’s your tree and your tree only that smells like Christmas, and leave it at that. Yes, the tree lasts, and yes, its shape is the “uniformly pyramid” one that appears on that square-plate Christmas china all our grandmothers served coffee cake on every year, but it’s the smell, isn’t it? Unmistakable, slightly sharp, slightly sweet, and tinged with the fervent hope for a brand-new bike. Or that orange, ring-shaped Aerobie thing that flew half a mile and which my brothers and I promptly lost in some impenetrable ravine.

Full disclosure: Now that I’ve got my own children, there’s also, these days, in that smell a bit of prayer that we survive the season without injury or accident or grave transgression, but that is neither here nor there.

Did I mention that I vacation every fall on a Christmas tree farm? That, off the back deck of the little cabin we rent, you can see acres of Frasers before they give way to forest? That a North Carolina Fraser fir has 12 times (and counting) been the official White House Christmas tree? That, even as a kid, my favorite thing about Christmas was staying up after everyone else had gone to bed to stare at the tree? Did I mention I’m married because of a Fraser fir?

In one of the years before we were engaged, my wife was seized with the spirit of the season and bought and decorated for me, while I was at work, a Christmas tree. A Fraser. I knew even before I opened the door, before she surprised me in the dark by plugging in the strands of lights: That smell. Christmas. I don’t remember why I hadn’t yet put one up. I don’t remember much about that moment besides the smell of the tree, the glow — OK, there’s a glow, there’s an unparalleled glow — of the lights, the way the shadows of the needles played against the ornaments. And this: I knew, without reservation, that if she’d have me, we’d be married. That if she had done this thing, then she knew me better than anyone else ever could.

I probably knew, too, even then, that somehow, impossibly, one day we’d take our own kid, or kids, to a Christmas tree lot; that the lot would seem so much smaller than I remembered them being when I was young; that our son, once old enough, would sprint among the rows, delighted — and that this year our second boy, not yet a year old, will watch him, staring, both of them probably wondering, What is this place?

It’s Christmas, I’ll tell them, like my mom told us. Go. Breathe that in. Play as hard as you can. Then come back and help us choose one. These are Fraser firs. This is the state Christmas tree. This is not for fooling around.