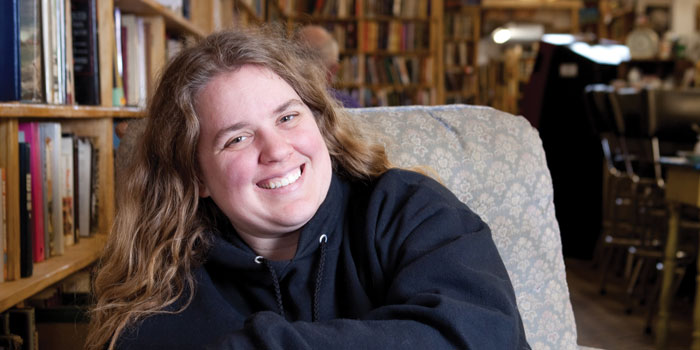 Inside the recycled bookstore in Wilmington, the scent of aging paper tangles with the aroma of freshly brewed coffee. Towering pine bookshelves packed with paperbacks and hardcovers run against the walls, some jutting out to form nooks that hide well-worn chairs.

Old Books on Front Street is home to a comfortable chaos. But what stands out most, beyond the colossal number of books that reaches about two miles if measured binder to binder, is the depth of the 1910 structure.

Split into two sections, the front is nearly twice as long as an 18-wheeler. The ceiling is almost 18 feet. The rear section adds another 50 feet. The building is as narrow and long as a chicken house.

Gwenyfar Rohler, managing partner, says she sees how overwhelmed visitors are upon their first visits. She calls this the Alice in Wonderland effect. With thousands of books at every turn, it’s not unlike finding yourself in a literary adventure.

Rohler and her family have owned the shop since the mid-2000s. “I say I don’t really own the bookstore,” she says. “We coexist together.”

In late 2004, Daughtry called Rohler and her parents. He wanted her to take over the store. Rohler was a stringer for Wilmington’s Star News at the time. She wanted to leave the paper, but didn’t want to leave Wilmington. “The call came at a fortuitous time,” she says.

Rohler first took over the estate side of the bookstore for about a year, and then took over the retail in 2007. Her first major project was to alphabetize and categorize the books, which took about two years.

“There was no order, not even close,” she says about the inventory she found when she took over.

Her family assumed a long-term lease from Daughtry. They discussed buying the building to avoid increasing or relocating the 160,000 books.

In February 2009, Rohler’s mother was diagnosed with cancer. Her mother died in June of that year.

“It was sudden,” Rohler says. “Needless to say, we were in a state of shock.”

After a few months, she and her father began talking again about purchasing the building. On January 12, 2010, Rohler received another phone call. The building was condemned.

“It was unbelievable,” she says. “We didn’t know what was going to happen.”

She and her family were given 30 days to vacate, but no one was allowed in the building. Rohler scrambled to collect enough boxes to move the 10,000 books into storage.

Then February 27, 2010, arrived. It was time to empty the store. Weeks earlier, Rohler sent a mass email asking for help moving the books, expecting a few dozen people to show. Three hundred people showed up.

The community helped move the thousands of books and emptied the building, aside from a few pieces of furniture, in one day. “I spent the day in tears,” Rohler says, her eyes misting up.

Once the inventory was in storage, she started searching for a new location.

When a long-time patron contacted her about 249 North Front Street, Rohler knew it was the perfect spot at half the price.

The community stepped up again and shelved thousands of books. The store held a grand opening on December 5, 2010.

More than a year later, Rohler still needs to organize a few thousand books. She seems to be taking that worry in stride.

She chats with customers about the books they’re purchasing and the authors who wrote those books. She gives the customers her undivided attention. Behind the antique desk at the front entrance, she greets every person who walks in the door with the same message.

“Make yourself at home,” she says. “Stay for days.”

Jennifer Allen, a Swansboro native, is editor of the Coastal Living and Compass Points sections of the Carteret County News-Times in Morehead City.