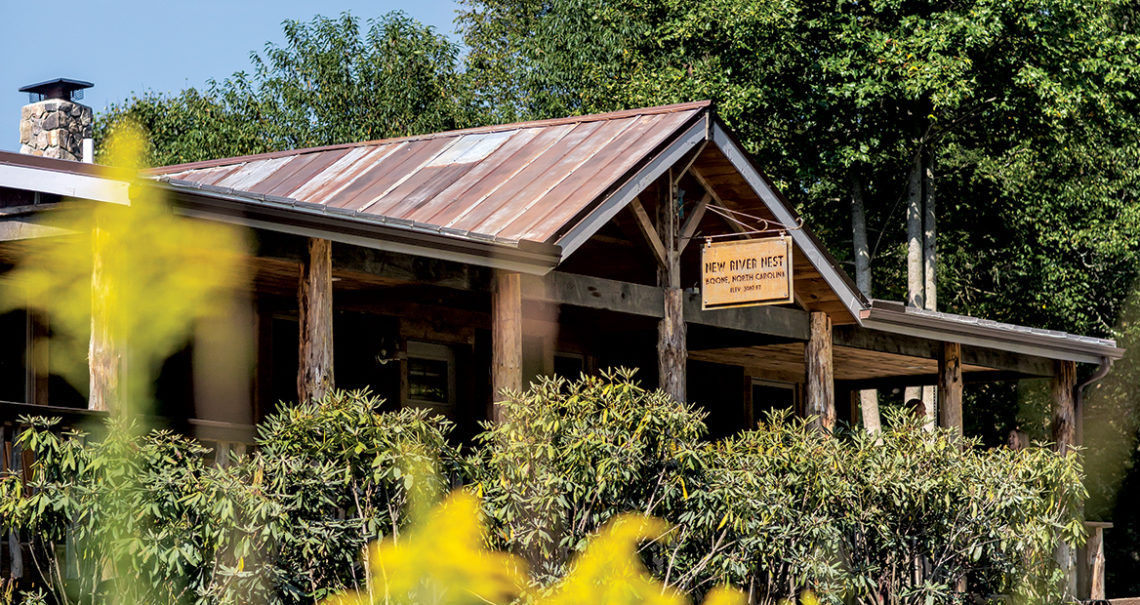 The dilapidated general store was located on a gravel road six miles outside of Boone. It had corroded door knobs, a rotten front porch, and several broken windows. If you were brave enough to peer inside, you could see that even the bird’s nest that was haphazardly hanging from an interior rafter had been abandoned. I once said that I wouldn’t take the place if someone gave it to me. Years later, I ended up buying it.

My husband, a builder, felt that the place had healthy bones. My son, a budding archaeologist, loved that the previous owner had used the property as a dumping ground for old bottles and curiosities like broken typewriters. But where my family saw potential, I saw pitfalls.

Why, then, did I ultimately agree to purchase this hole-in-the-wall? I think it was because of the stories. My eldest neighbor, Archie, and his wife, Dolores, were the first to tell me that the place had been a general store. It sold nuts and bolts, stacks of surplus Wrangler jeans, and an assortment of other items secured from a down-mountain transit company. Once, Dolores bought a vase from the shopkeeper. The next day, the woman walked up to Dolores’s front door with hand-picked flowers to fill it. That’s the kind of radically hospitable place the store was until it closed in the 1980s.

Before I heard its stories, the old building, which overlooks the New River, was just another structure lost to weeds. As a lifelong back-road-traveling North Carolinian, I didn’t view abandoned buildings as things that necessarily needed to be torn down or fixed. They were, to me, part of the landscape, not unlike kudzu or morning glories. But when my neighbors started reminiscing about the store in its heyday, saving the place from total ruin began to feel like a duty.

As a writer, I tend to live in my head. My mind wanders. I get distracted. But after we bought the building and started caring for it, physically, it showed me that I am capable of working with my hands to construct things nail by nail as well as page by page. I got comfortable with power tools. I got splinters. The store pulled me out of my mind and back into my body.

Abandoned buildings were part of the landscape, not unlike kudzu.

Out went rotten boards; in went energy-efficient insulation. Pine walls were repurposed as furniture. The weathered exterior soffit became distressed kitchen cabinets, sanded and sealed. It was all there, rearranged: energy neither created nor destroyed, only changed.

After we rebuilt the front porch, people from around the valley would stop by when they saw my family working. They’d park their cars along the road and wander around to see how far we’d gotten. I noticed that my neighbor Joe, whom I’d often seen scowl at the derelict store on his drive home, now smiled at the sight of it.

One afternoon, the original owner’s son dropped in. He said that whenever people walked through the store asking the prices of things, his father — who was, by all accounts, a character — would retort: Cheaper than it would be if you bought it in downtown Boone! Before he left, the son inspected the cedar shakes that he’d nailed on as a young man. Many things had been moved or replaced during the renovation by that point, but his handiwork had stayed. 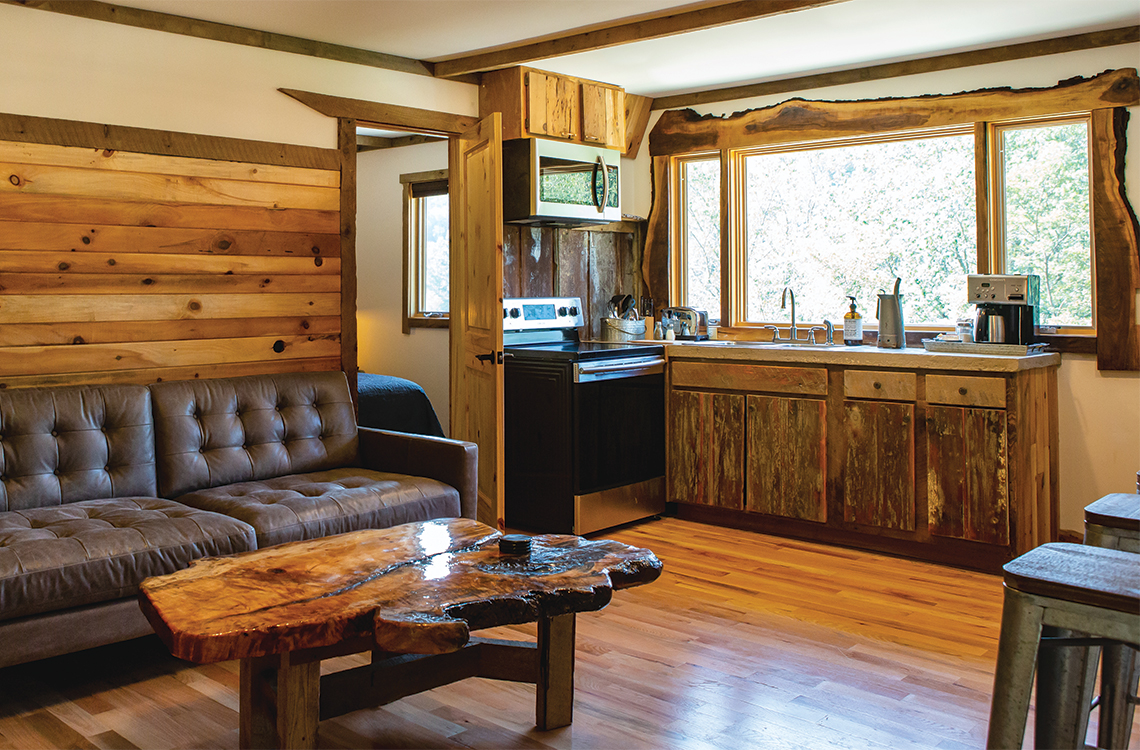 Early on, the author found a nest in the rafter of the old store. When she and her family turned the place into a cottage, they named it The New River Nest for the blue heron and osprey regularly spotted from the back deck. The table in the living area is inlaid with stones from the river. photograph by Tim Robison

His nephew, a metal worker, soon came for a tour as well. He made special note of our rough-hewn porch logs, which my husband had salvaged from a construction site where they’d been slated to burn. A few days later, we found a collection of T-shaped metal pieces sitting on our porch railing. They were connectors, meant to bond old wood to new, and they’d been offered as gifts in support of our project.

To me, renovating this shell of a building began to feel like a summoning of grace. Whereas once, the store had been lost; now, it was found.

The place had been framed as two separate living quarters after the mercantile inventory was sold off. The next owner intended for it to be a hideaway for family and friends, but none of them were interested in undertaking the substantial task of getting it up to snuff. When my family broached the interior, we traced wall studs to finish what the previous owner had started, but with a modern twist — embracing a newfangled take on old-time hospitality by turning it into an Airbnb.

We worked through the fall, as leaves blushed. We sanded and stained through winter, as snow muffled the sound of our saws. We sweated through spring, as the hills burst into green. Then, one day, the building’s transformation from an old general store to a new country cottage was, quite unbelievably, complete.

It was an exhilarating feeling. But it didn’t last long. Downriver, the news wasn’t good. Our 91-year-old neighbor, Archie, had been ailing. The very week that our renovation was complete, he passed away.

New neighbors, old neighbors, family, and friends from far-flung states aimed their cars toward eastern Watauga County when they heard about Archie. They were coming to pay their respects. But Dolores, his wife of half a century, didn’t need dozens of people tumbling into her kitchen all at once. We could have made the short trip to Boone to gather at a restaurant or coffee shop, but that wouldn’t have felt right.

The old general store, retrofitted with porch planks that were now safe to tread, seemed an obvious place for everyone to meet. After all, it had originally been a communal space. Currently, my family held the deed. But in the collective memory, this building — like the free-flowing New River, visible from its windows — wasn’t a matter of yours or mine. It was ours.

We sanded and stained through winter, as snow muffled the sound of our saws.

By nature, general stores similarly provide for us when we are in need. Watauga County has more than most. In Valle Crucis, Mast General Store offers refuge in the form of a potbelly stove and a checkerboard. Out toward Todd, the Goober Peas Country Store peddles milk and bread alongside things like inner tubes for river floating, because the spirit needs feeding, too. These stores are, as they have always been, more than the sum of their parts. They’re greater than cast-iron pans and bags of grits. They’re not just tourist attractions. They’re hubs of local heritage.

Looked at a certain way, it’s an uncomfortable truth that the buildings we erect and the communities we cultivate outlast us. But viewed in the long arc of history, it’s a truth that can still hold beauty.

Our former general store is now known as The New River Nest, a casual country getaway. It even has a sign, hung from the store’s original placard arm, which we found half-buried during winter. As out-of-town visitors arrived for Archie’s funeral, they joined us under that sign, which welcomed them from its rightful location above the front porch.

There, in that old store where neighbors once congregated to pick up necessities and shoot the breeze, we watched the sun roll away, and we toasted our beloved Archie. The clinking of glasses sounded like bells tolling to declare the former general store an emblem of living memory.

People who’d passed the store during its renovation swooned over the barn-door closets and the live-edge slabs that had become breakfast nooks and bars. Those who’d only seen the store before and after renovation gaped in disbelief over what had transpired. Former neighbors, who’d sold their houses while retaining their love of the area, said that it was comforting to feel like they had a place to land if they wanted to come home for a weekend. They asked for links to our rental site and said that they might refer friends. They’d found that it was difficult for them to express to flatlanders the exquisite joy of where they’d come from, and they wanted others to be able to experience it for themselves.

The New River Nest has bedrooms in former display areas and a bathroom sink where the cash register once stood. It is no longer a general store that vends surplus denim and ceramics. It doesn’t house tools or hardware anymore. But when it comes to dispensing a sense of belonging in the mountains of North Carolina, its doors are, once again, open for business.