Marshall Wyatt stands in the music room of his house and scans his collection. He pulls out an obscure 78 rpm record from 1929, Back Up and Push by an ensemble called the Georgia Organ Grinders. Of course, Wyatt knows pretty much everything about the record and the group, a spin-off of the legendary old-time band the Skillet Lickers.

“Having the word ‘Organ’ in their name was not figurative,” Wyatt says, cuing up the record on his stereo. “They had a fiddler named Lowe Stokes, who was one of the greats. But on this record, he plays an organ, which is almost unheard of in hillbilly music.”

Wyatt drops the needle and sits down to listen, hands on his knees and toes tapping. Back Up and Push starts out as a straight-ahead fiddle tune of the sort that was in the air a lot during the years before World War II — until, sure enough, the sound of an organ rises up. Wyatt’s face lights up at the sound of it, and he points at the stereo speakers as he cackles.

“That is so great,” he says. “Maybe the weirdest thing I’ve ever heard.”

Given everything Wyatt hears, that’s saying something.

A collector of old things but especially old records, Wyatt, 61, runs a label out of Raleigh called Old Hat Records. He’s spent the last 14 years putting out compilations of some of the rawest, most beguiling and mysterious old-time folk and blues you’ve ever heard.

The eight Old Hat releases include everything from songs about barbecue to string-band recordings from North Carolina’s “Lost Provinces,” a mountainous area so named because of its extreme isolation. Wyatt assembled each one with care and attention to detail. Old Hat might be the only one-man record label in America to have multiple Grammy nominations (two for the 2005 compilation of medicine-show songs, Good For What Ails You).

Archiving and preserving things comes naturally to Wyatt, who began as a kid, amassing coins and baseball cards. He picked up collecting from his father, who Wyatt says was interested in strange, obscure artifacts — silent western movies from the 1920s, for example — and obsessively documented his family in photographs and films.

After graduating from Broughton High School in Raleigh, Wyatt studied painting at the San Francisco Art Institute and worked in art galleries. In California, Wyatt started hanging around with old-time record collectors. And in 1987, Wyatt paid $5 for Nine Pound Hammer, a 1928 recording by Frank Blevins & His Tar Heel Rattlers. But it was the B-side, Don’t Get Trouble in Your Mind (later recorded by the Carolina Chocolate Drops), that captured Wyatt’s imagination.

“It was amazing and sounded like it had come out of another world,” Wyatt says. “I was a middle-class, middle-American, middle-century kid, and this was from an earlier time. It was new and somewhat alien but immediately appealing. It felt like it came from a place that was not at all driven by commercialism. The word ‘authenticity’ has been so overused it hardly means anything anymore, but you can’t fake what they had.”

Intrigued, Wyatt started reading up on Blevins and tracked him down in Tennessee when he was back East for a wedding. Talking directly to the maker of a record that moved him revved up Wyatt. That feeling grew more intense when Wyatt connected with Blevins’s old banjo player, Fred Miller, who was living in Ashe County.

“Fred wasn’t important or well known,” Wyatt says. “But he intersected with some great names in old-time music — Frank Hutchison, G.B. Grayson, Charlie Poole. Fred had stories about them all.”

Wyatt got serious enough to relocate back to Raleigh to get closer to the source of the music, setting up shop as an antiques dealer. Eventually, he acquired enough old records, photographs, and oral histories to put out a CD in 1997 — Old Hat’s first release, Music From the Lost Provinces: Old-Time Stringbands from Ashe County, North Carolina & Vicinity, 1927-1931. That project established Wyatt’s formula of sticking with public-domain material (recordings with expired copyrights), packaged with superlative liner notes, graphics, and photos. Old Hat releases are a treasure trove of long-forgotten names from the distant past — Ephraim Woodie & the Henpecked Husbands, Smyth County Ramblers, Red Fox Chasers.

The most recent Old Hat release is last fall’s Barbecue Any Old Time: Blues From the Pit 1927-1942, with two dozen songs about the smoked-meat arts. On tap for 2012 is a companion piece to the barbecue album, a collection of songs about chicken. Wyatt produces 5,000 copies of each release at a time, and each one has sold at least enough copies for him to break even. His top seller is the Grammy-nominated medicine-show album, at about 15,000 copies sold.

“Nobody’s getting rich,” Wyatt says. “It’s been tough to make a lot of money, but I’ve been able to keep the business going. I put in some startup money years ago, and my rule has been no more in — it’s got to pay for itself.”

Meanwhile, Wyatt is still out there prowling estate sales and secondhand stores for old records, and the people who made them.

“I was lucky to come in on this in the late 1980s, when a number of these people were still around,” he says. “And I still come across them even now. A few years back, I heard this record by the E.R. Nance Family with this beautiful, soaring soprano voice that just sent chills down my back. A few months later, I found myself in Boonville … talking to Helen Nance, the one surviving member, and it was her voice I’d heard. There she was, this little, old lady, the last in a long line. Finding people like that sustains me.” 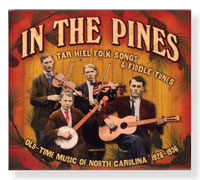 Ever since Old Hat Records began, Marshall Wyatt has wanted to do a six-disc box set of North Carolina old-time music. He’s already more than halfway there. Three Old Hat records contain only North Carolina music, and two more are expected — Crazy Barn Dance, including acts from the 1930s radio program of the same name in Raleigh and Charlotte, and Lumberton Wreck, centered on acts associated with Kinston-and-Durham record impresario J.B. Long.

As to the North Carolina records Wyatt already produced, 2008’s In the Pines collects North Carolina folk songs and fiddle tunes. Gastonia Gallop, from 2009, compiles recordings by textile workers in prewar Gaston County. But the Old Hat record nearest and dearest to Wyatt’s heart is his first, 1997’s Music From the Lost Provinces, with songs steeped in the North Carolina mountains. Lost Provinces is Wyatt’s favorite Old Hat release because of his personal connection to many of the artists on it, including Frank Blevins and Carolina Night Hawks banjo player Donald Thompson.