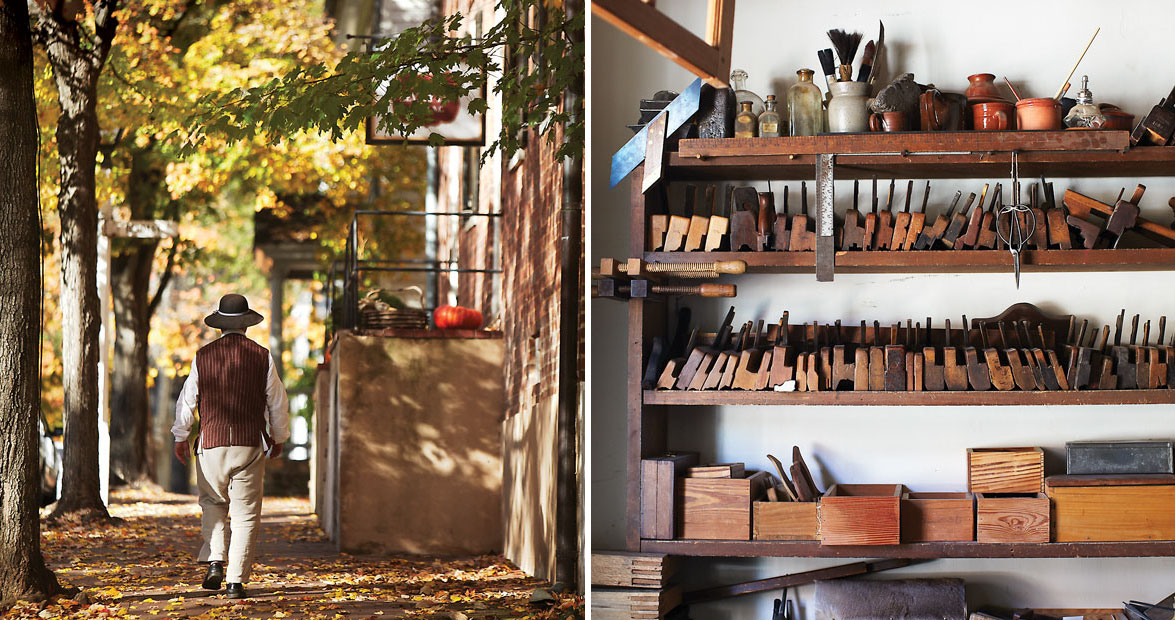 Imagine Old Salem when it was new.

It is 1772 and you or your parents were among the first Pilgrims to move from Pennsylvania to this wilderness in the hills of the western Piedmont of North Carolina. You settled in what was known as the Wachovia area. And you set up two towns, Bethabara and, later, Bethania.

Now your church has decided to start a new settlement, Salem, which means “peace” in the Bible. You are one of 120 Moravians moving from Bethabara to Salem. The distance is about six miles, south through the wilderness.

Your German ancestry makes you more practical than your English counterparts in the New World. You have a history with architecture designed to work with the land, to aid your day-to-day life. You built a functional community in Bethabara, and when your leaders decided to build Salem, they did the same here. A plan for a circular town square, for instance, was abandoned in favor of a square town square, to accommodate the rolling hills.

This new town, this new Salem, will be the heart of Wachovia. It will be a center for trade and industry in the Southeast, with a town store, pottery, tannery, mill, and tavern for guests. Since 1766, men and women have been building Salem, and in 1772, it is ready to be lived in. The prospects of being a part of this place, of being a part of something, help guide your feet as you make the trip up and down the hills, across land that will one day become a center of tobacco and banking in North Carolina, many years after you’re gone.

In your new town you all will be equals. The Moravian Church owns all the land; sets all the wages; determines where you live; how you live; and in most cases, whom you marry. You find comfort in this equality. When you die, you will be buried next to the person who most recently died before you, not your wife or your children, and your headstone will look like all of those around you, and it will face east, and you will rest here forever in a place you call God’s Acre.

This all sounds perfect to you. So you take notes. You record details, details about vegetation, details about how the town was divided, details about who comes to visit, details that will one day make it possible for your new town to be preserved.

There are many reasons Old Salem is still here in 2012, an 18th-century town sitting snugly against present-day downtown Winston-Salem. There have been donors and historic-landmark designations and all sorts of official preservation efforts.

But the main reason it’s still here: those records from the past.

Few of our earliest settlers took such detailed accounts of their new towns. North Carolina is full of towns with long histories, but in many the history has been narrated and adapted, a fact that must be taken into account when hearing it. Even the first English settlement on Roanoke Island became the Lost Colony, and the mystery surrounding the disappearance of that settlement is still a matter of conjecture.

In Salem, however, the Moravians documented everything. So when leaders in Winston-Salem in the 1950s decided to preserve Salem and turn it into Old Salem, they were able to recreate an authentic 18th-century life.

“I don’t think this could be replicated [in other historic settlements],” says John Larson, Old Salem’s vice president of restoration and planning.

Nowhere is that authenticity more evident than in the vegetable gardens around town. In 2012, Old Salem includes 107 historic buildings. Seventy-three are original to the settlement. Only 12 are interpreted for tours, which leaves dozens of houses open for private ownership. Many of those owners have vegetable gardens. The rules of Old Salem state that owners can only grow vegetables that were available when their houses were built. Some houses in Old Salem have tomatoes in the garden; others are not permitted to grow them because tomatoes didn’t arrive here until the early 1800s.

The documents and records from the past lend Old Salem several distinctions. The town claims to be the location of the first public Fourth of July celebration in the country. Records show that Salem’s people gathered for the celebration on July 4, 1783. This one is known as the first because no other town has records that show anything earlier, Old Salem officials say.

The records also indicate that on May 31 and June 1, 1791, George Washington stayed in the tavern in town. That tavern, built in 1784, still stands today almost exactly as it did then. It is one of the few symmetric structures in Old Salem. The settlers, who were of German descent, built the tavern that way to welcome guests, most of whom were of English descent, because those English guests would be accustomed to symmetry. The front of the house has no windows, giving guests separation from the town outside.

Inside the tavern’s kitchen, reenactors still use the same methods employed then, starting the wood-fired oven every day and cooking something from the period. Many days they grind and roast coffee the old way, so visitors can experience the same flavors Washington might have tasted during his visit.

Drew Neill is about 5 feet 6 inches tall. So he wears stripes to make himself look taller. He made those shirts with those stripes himself. Neill is the tailor in the Single Brothers’ House, where all of the single grown men lived and worked, separate from the single women. The Single Brothers’ House is a historic landmark today, and inside, people like Neill make it feel like the 1700s.

Every piece of clothing Neill wears, down to his underwear, is handmade according to records of the time period.

Neill has worked at Old Salem for 11 years. He lives his days as if it’s 240 years ago and then goes home to live in a modern world. He was a history major in college, and he knew he wanted to be a reenactor when he saw his first Civil War reenactment in the seventh grade.

He’s most interested in the period clothing. So every day, he comes to work and makes it. He makes shirts and pants and head wear. He measures the other reenactors and tailors their clothes. All interpretive staff members at Old Salem are required to wear clothes of the time and keep them washed and presentable every day.

Neill studies the psychology behind clothing through time, and he believes that what he wears at work and in the outside world says something about him and his personality. Like those stripes.

Dozens of people like Neill make a living here by living in the past. A man makes shoes in the upstairs of the Single Brothers’ House. A baker makes sugar cake six days a week on the wood-fired stove in C. Winkler Bakery, the most popular attraction in Old Salem. Two men make guns in the old T. Vogler gunsmith shop. At the Miksch House, men work in the gardens growing seasonal vegetables, and women work in the house cooking meals with those vegetables.

Old Salem is a place where sustainable living, which is popular again today, is put on display with practices people used two centuries ago. It is a place that proves that old ways circle back and become new ways.

Imagine again that you’re one of those settlers. You are intent on making a settlement that’s permanent. You leave signs of that permanence everywhere. You dig a basement because that’s how your ancestors lived in Germany. Anybody who’s ever worked with the red clay of the Piedmont before you and anybody who will work with it after you knows this: If you decide to dig into this hard land, you must want to do it.

You also terrace the land behind your home wanting to make the most of these hills for your garden, another sign of permanence.

Your sons will grow up and move into the Single Brothers’ House, until one day they will marry — with the blessing of the church.

You believe in this church. Your kids believe in this church. Your descendants will believe in it so much that when the county of Forsyth is formed and officials try to build a courthouse in your square, your people turn them away. They build the courthouse just north of here, up the hill, in a new town called Winston. In that new town, they will have industry. They will start massive tobacco businesses and textile businesses with names like Reynolds and Hanes. Your descendants will think of these new ways as sinful for a while, until they can’t hold on any longer. Winston will become too large. The towns will merge, separated by only a hyphen and sentiments toward capitalism.

Your descendants will help grow that new town. Something called Krispy Kreme will open in the heart of your old town. It will be a big business, and the money will go to the business owners, not the church. It will become a different world.

But you leave the records. And in time, when some citizens of Winston-Salem decide to save Salem and make it Old Salem, those records will allow them to do so.

And in time, Krispy Kreme will move out of Salem because it isn’t from your time period, and the only things grown here will be things that were grown here when you were here. In time, everything you built will be just like it was when you left it.