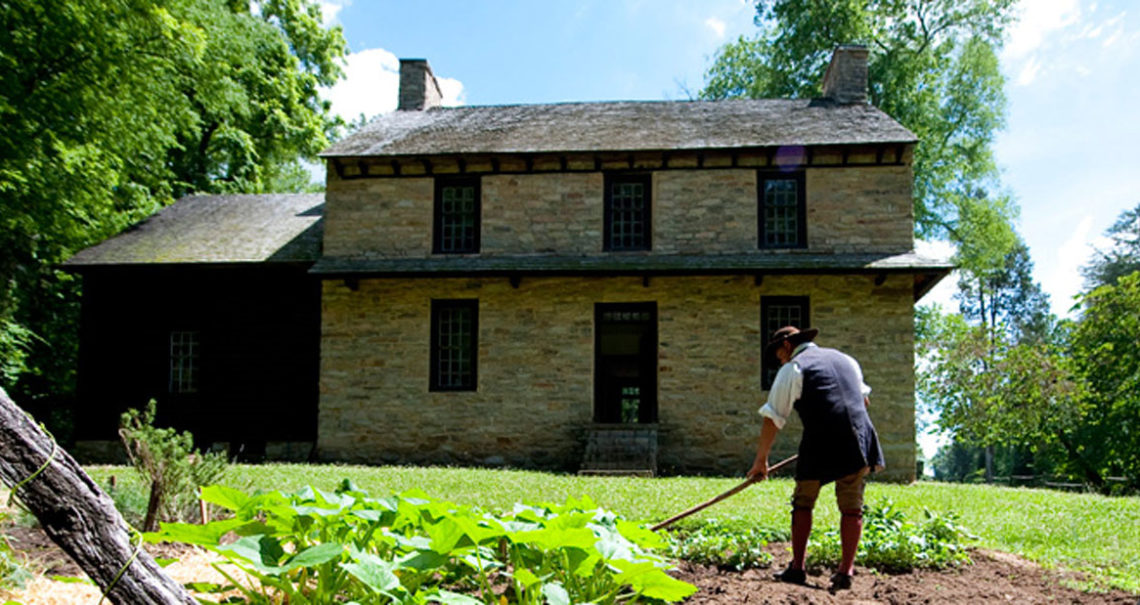 EDITOR’S NOTE: This story was originally published in the August 2010 issue of Our State.

On a slight rise above a rocky creek near the town of Granite Quarry, German immigrant Michael Braun built a grand two-story home that stood out among other Colonial homes because of its size and elegance.

Nearly 250 years later, the Old Stone House of Rowan County still commands attention. It is a North Carolina treasure, considered one of the finest examples of German architecture in the Southeast.

Its place among our state’s architectural jewels, however, was not always assured. Abandoned in the early 1900s, the house was ransacked by vandals for more than 20 years, and its two-feet-thick granite walls were almost ground up to make a roadbed.

“It would have been a horrific loss,” says Kaye Brown Hirst, executive director of the Rowan Museum and an eighth-generation descendant of Braun (who changed his name to Brown after settling in North Carolina). “When I come over the hill and see that house, it gives me such pride. Even if I weren’t a family member, I would be proud. It is a gorgeous house, a great testament to the early pioneers in this area.”

Braun was a teenager when he boarded the ship The Glasgow and sailed for the New World. He arrived at the port of Philadelphia in 1738. Like most of the immigrants on board, he came as a “bond servant,” meaning he had to work several years in Pennsylvania to pay for the trip.

Braun became a wheelwright and stayed in Pennsylvania 20 years before traveling south along the Great Wagon Road to the backcountry of Rowan County in the late 1750s. He bought 274 acres out in the wilderness near the middle fork of Crane Creek and began building his stately home.

Most settlers in the area lived in cabins. Not Braun. He built his home with 3,500 tons of granite, hauled by oxen from a quarry a mile away; construction took more than seven years to finish. The foundation alone extends 12 to 15 feet into the ground. The granite stones on the front of the house were polished, smoothed, and shaped to match each other, to make a good impression on passersby. But the stones on the sides and back were left unfinished and uneven. The shingles on the gable roof were fashioned from cypress brought from the coast, and wooden pegs supported huge weight-bearing oak beams.

Robbie Cochran, a docent and chief volunteer at the Old Stone House, often dresses up in period Colonial clothes — knickers, a blousy white shirt, knee-high boots — and leads tours of the house. Before visitors enter, he instructs them: “Look up.”

Chiseled on a stone above the door, between two upstairs windows, is an inscription that for many years confounded everyone who saw it: “MICHAEL-BRAUN-MRICHREDA-BRAUN-10-Pe-Me-Be-Mi-Ch-Da-1766.”

The names of Braun and his wife, Margareta (Mrichreda is the German spelling) were obvious. But what about the abbreviations? People assumed they referred to some of the at least 10 children Braun had by three wives. The last child, a daughter, was born a few months before he died in 1807 in his 80s.

But in 1971, Dr. Frank Cauble, a Lutheran minister who served in Rowan County in the 1930s, offered an interpretation that is now commonly accepted. It was German custom, Cauble said, to inscribe a new house with the builder’s name, the date of completion, and a Bible verse or other religious sentiment.

The numerals refer to the date when the house was completed: October 1766. The letters are most likely abbreviations for the German words: “PEnsum MEines BEndigen MIt CHristim Dank.” Translated: “With thanks to Christ, my task is completed.”

Braun continued to work as a wheelwright in Rowan County and also farmed and established what may have been the first printing press in western North Carolina. He later served as constable and a justice of the peace. Over the 40-some years he lived in the house, he amassed more than 3,000 acres of land.

He is believed to be buried in the family cemetery, walled in by stones a few hundred yards from the house in a patch of woods across the road. His original headstone is missing, but the stone above his first wife’s grave still stands with an inscription in German, the translation of which is: “Here lies the body of Margareta Brown, the wife of Michael Brown. Died July 20, 1771, age 37 years and two months. She had nine children, six sons and three daughters.”

The last of Braun’s descendants moved out of the house in 1904, and it stood abandoned for years, becoming a popular spot for picnickers and vandals. Eventually, only the granite shell remained. The attached wooden kitchen collapsed onto itself, the glass in all the windows was broken out, and the floorboards on the first level were burned in campfires. The staircase, too, was cut up for firewood, which, in retrospect, was a good thing. That prevented anyone from going up to the second floor and destroying an antique weaving loom that the family left there.

Hoping to save their ancestral home, trustees of a Brown-Fisher family reunion association bought the house and two acres of land in 1927 for $1,000. But the repairs were too great for them to accomplish. So in 1948, they sold the house to four of Braun’s descendants who spent more than $10,000 trying to restore it. Again, the repair costs were far too great. The Rowan Museum stepped up in 1959, paid $10,000 for the house, and spent another $27,000 over six years restoring it to its former grandeur. Frank Horton, who helped create Old Salem Inc. and the Museum of Early Southern Decorative Arts, oversaw the project.

The museum bought several buildings dating from the Colonial period and dismantled them to procure wooden floor planks, hand-blown glass, metal hinges, and other architectural details for use in the restoration. Local residents donated much of the furniture that now fills the rooms, including portraits of King George III and Queen Charlotte on the living room wall. The cradle where Braun’s children slept, the loom upstairs, and only a few other objects are original to the house, but everything that was donated predates 1810.

“I was there in October 1966 when the house was opened to the public,” Hirst recalls. “I was just a freshman in high school. I remember running around the house and thinking how neat it was. Never in my wildest dreams did I imagine I would one day hold the keys to the ancestral home.” As executive director of the museum, she now oversees the Old Stone House.

The front door opens into a small living room with an angled fireplace that shares a flue with a fireplace in an adjacent bedroom. To the right of the living room is a larger room where the family likely entertained guests. Beyond that room, a huge cooking fireplace faces into a spacious kitchen, rebuilt with old pine and other scavenged material.

Upstairs is a second bedroom and a large, open “working room,” where the loom stood. Braun, because he had such a big house, opened it to travelers who slept on straw-filled mattresses in the working room.

High in the walls near the chimney are openings that many believed to be gun ports for fighting off Indians. Their actual purpose is not so exciting. They were, Cochran says, ventilation holes for cooling the house.

According to another legend handed down through the generations, the British Army passed in front of the house in 1781 on its way to the Alamance battlefield. The Redcoats spotted an American scout spying on them and gave chase. Braun’s wife opened the front door to the house, the legend says, and waved the American soldier through. He escaped the Redcoats by riding his horse out the back door into the safety of the woods and the creek beyond.

In those woods and by the creek, Cochran has uncovered hundreds of 18th-century artifacts, including clay marbles, pottery pieces, and a brass shoe buckle. Many are on display, bits and pieces of history saved for posterity, just like the Old Stone House itself.