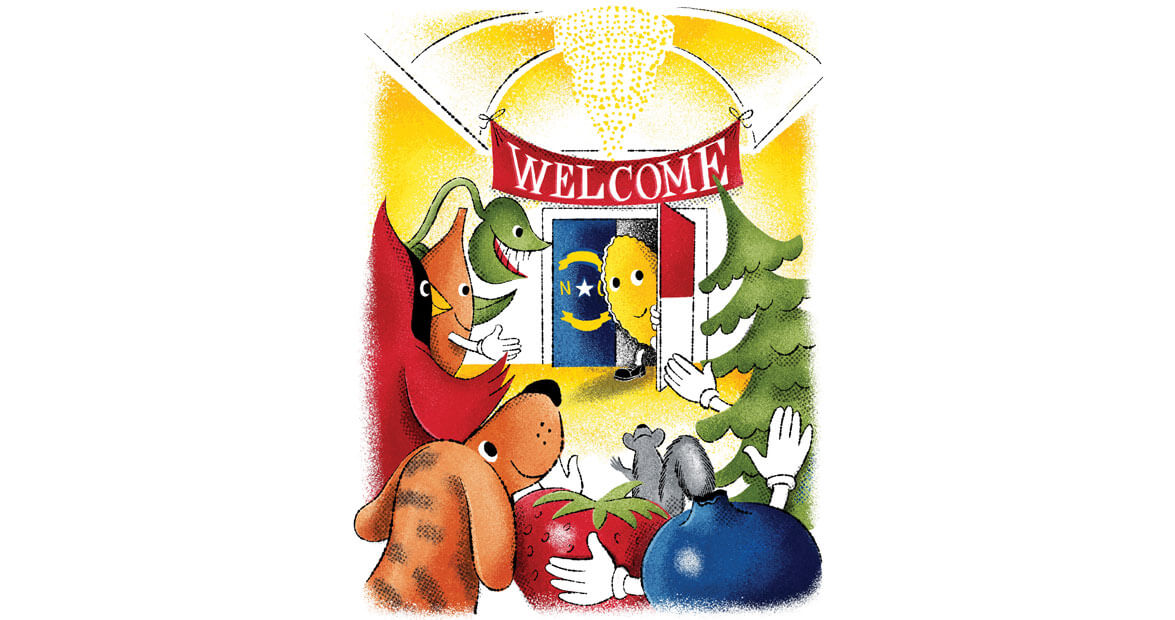 All fourth graders across North Carolina study state history and government. So every year, John Phillips, a social studies teacher at Brooks Global Studies Extended-Year Magnet School in Greensboro, takes his class to the Capitol to see where governing happens. One favorite stop is a large mural of the state symbols, from the state dog (Plott hound) to the state tree (pine). Phillips always points out that the state vegetable, the sweet potato, was added after a campaign by schoolchildren.

In 2018, that trip to Raleigh so inspired Phillips’s students that they decided to try to add another state symbol to the list. After long class discussions, they picked two: state battleship (the USS North Carolina, docked in Wilmington) and state cookie, the Moravian cookie. That’s the crispy ginger cookie made by the religious group that settled near what is now Winston-Salem in 1753. 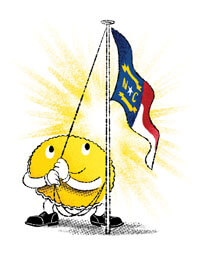 Only two other states have a state cookie. New Mexico has the biscochito, and Massachusetts, home of the original Toll House Inn, has the chocolate chip cookie. Maine has a state treat (whoopie pie), and Pennsylvania … well, Pennsylvania tried, starting with a school project in the 1990s, but politics is a tricky business. Pennsylvania’s campaign stalled, caught in a debate between oatmeal chocolate chip, chocolate chip, and the Nazareth sugar cookie.

Phillips’s class stuck with it, though. They did research, formulated arguments, and wrote formal letters to legislators. In March 2019, their request became a bill — House Bill 394 — sponsored by Rep. Jon Hardister and others. After the state battleship was split off into its own bill, the Moravian cookie bill made it through the House in May 2019, then landed in the Senate Rules and Operations Committee, where it spent the summer.

“It’s not an instantaneous thing,” Phillips says. “That’s one thing for them to learn: how slow everything works. Welcome to reality. It’s a good lesson.”

And a particularly fitting one for Moravian cookies, which are notoriously difficult to make. Sometimes called the world’s thinnest cookie, they have a thickness you can measure in the width of a Keebler elf’s eyelash. They’re also crisp — if a potato chip were a cookie, it would be Moravian. It seems that nothing about these beloved cookies comes easily — except, of course, eating them. 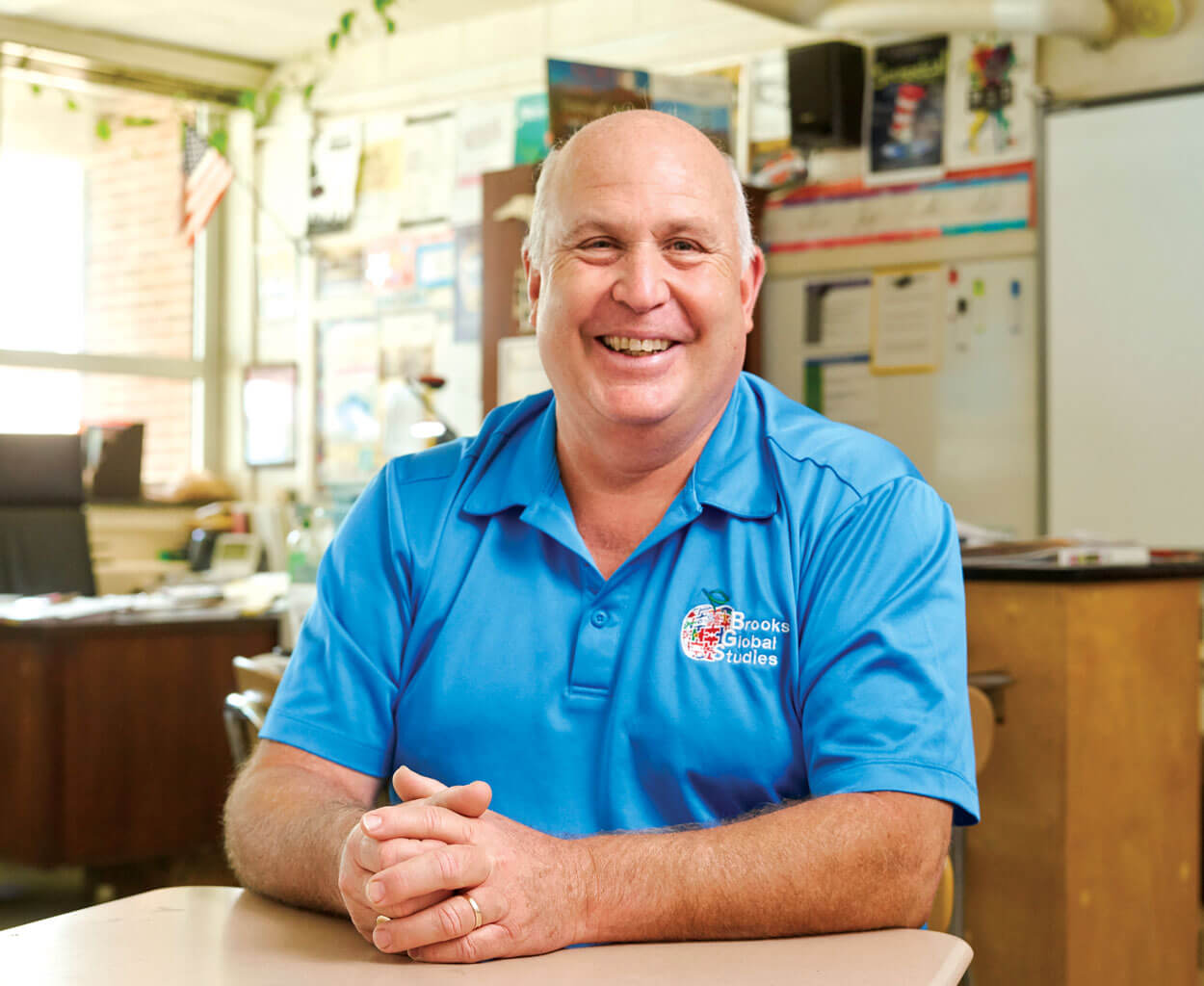 Even lifelong Moravians rarely make Moravian cookies by hand anymore. Most prefer to buy them from cookie companies like Mrs. Hanes’ and Salem Baking Company, a division of Dewey’s Bakery in Winston-Salem. While Winkler Bakery in the city’s Old Salem historic district gives lessons in rolling out the dough on Saturdays, the cookies sold there are made at a kitchen off-site.

There are a couple of things that make Moravian cookies so tricky: The dough, traditionally flavored with warm spices like ginger, cloves, mace, and nutmeg (although there are more flavors now, like butterscotch and lemon), is made in batches so large that they could defeat a cement mixer. Then, it has to be rolled out so thin that you can almost see through it — which means that cutting out and baking the cookies is particularly difficult, too.

Making Moravian cookies is so hard that it almost stumped Martha Stewart. In the late 1990s, cookbook author Virginia Willis was the kitchen director for the TV show Martha Stewart Living. Willis’s godmother, Jenny Wingate, now 94, became a Moravian when she moved to Winston-Salem decades ago. While Willis was working for Stewart, she brought in some Moravian cookies sent to her by the woman she calls Aunt Jenny. “Martha tasted them, and it became: ‘We must achieve this,’” Willis says, laughing.

Willis knew it wasn’t going to be easy: “Anyone with any sense whatsoever who wants Moravian cookies buys them. Those are the most time-consuming things you could ever ask someone to make. But we persevered.” The proof is in a video (you can find it on marthastewart.com) showing how the test kitchen conquered the cookie.

Making Moravian cookies is so hard that it almost stumped Martha Stewart.

Rolling the dough to the proper thinness is the eternal battle. Virginia Hege Tobiassen, 60, the pastor of Home Moravian Church in Old Salem, knows the challenge well. When Tobiassen was 17, she spent a weekend with her grandmother, even skipping a day of school, just to learn to make the cookies. She still has her journal entry, written on November 11, 1976: “Cutting the cookies and arranging them on the tray is something like cutting and arranging bits of wet Kleenex. The dough, when rolled to the proper nothingness, practically dissolves onto one’s skin.”

Tobiassen was one of four granddaughters in her family, but the other three never could learn to do it. “I just had the knack,” she says. One trick she remembers: You roll the dough out on a pastry cloth that you keep clean and folded between baking sessions. “When you can see the fold marks through the dough, it’s thin enough.”

Tobiassen used to make the cookies every Christmas, but she gave it up when she was in her 30s and her son was born. “I never had the time,” she says. “My grandmother, somehow, always had the time.” 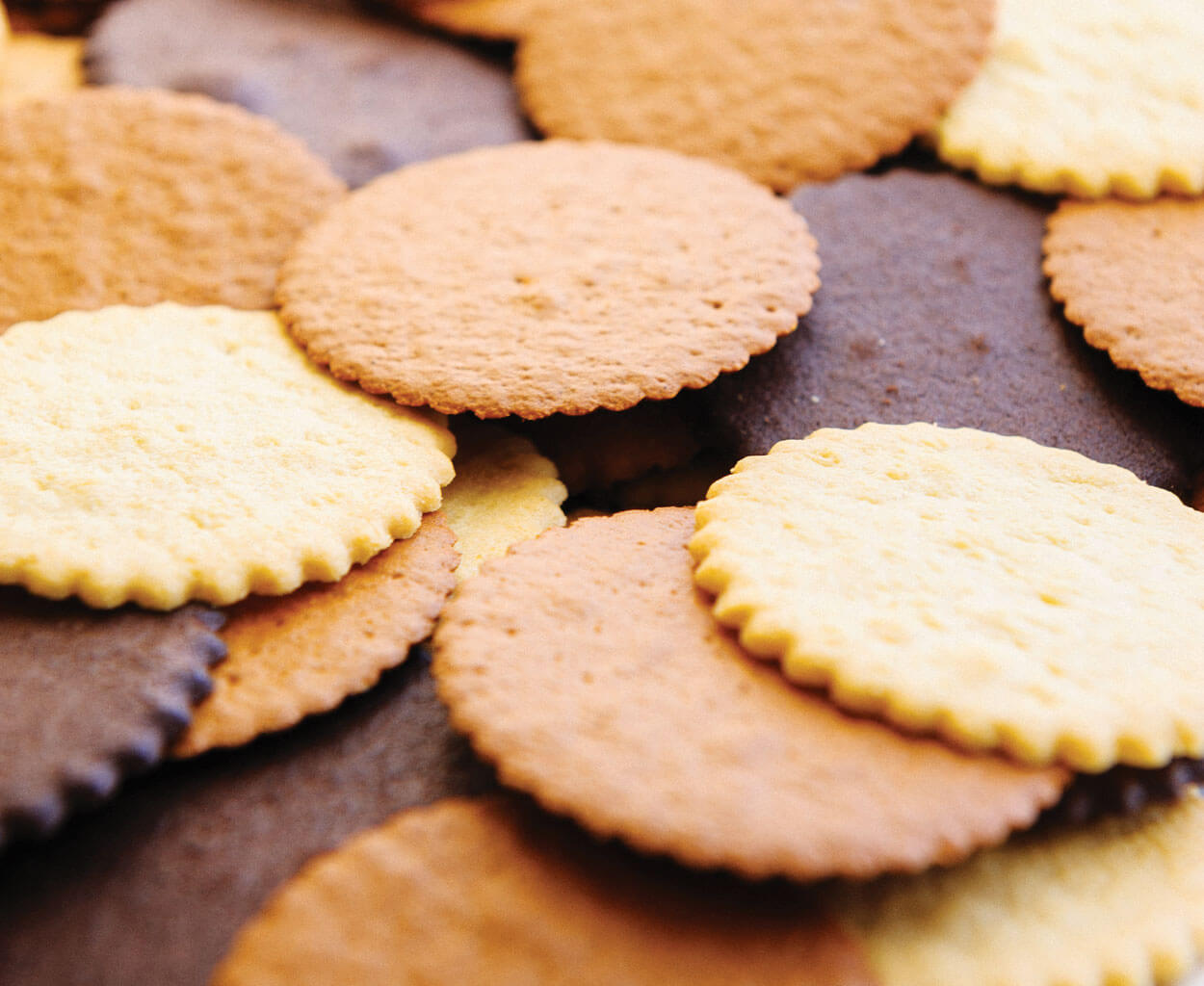 Most folks buy their Moravian cookies from one of several companies in the state. The cookies are particularly tricky to make because the dough must be rolled paper-thin. One Moravian baker described the process as “something like cutting and arranging bits of wet Kleenex.” photograph by Joey Seawell

As Mr. Phillips’s students discovered, if you want to study state history, the Moravian cookie is a good way to do it. Joanna Roberts is a longtime Old Salem employee who specializes in interpretations of life at the site. That makes her the unofficial cookie historian. She’s delighted that the state might turn the Moravian cookie into a symbol. It isn’t just about Old Salem, she says. It’s about North Carolina: “This is many cultures, blended together.”

The Moravians are a devout Christian denomination that originated around what is now Germany and the Czech Republic, and eventually migrated to America to set up missions. After settling in Pennsylvania, a group came to North Carolina and bought about 100,000 acres of farmland, called the Wachovia Tract, in what is now most of Forsyth County. They established a town, Salem, that became a busy trading post.

In those days, the word “cookie” hadn’t come into common use. Small baked sweets were often called cakes. Since the Moravians had access to spices like ginger, black pepper, and allspice, as well as honey and molasses, they would make a thick, dark spice cookie, a form of German lebkuchen, that was stamped with elaborate designs using wooden rollers or molds. It wasn’t the thin cookie we know today. Made from a low-moisture dough that would keep longer, the sweets were strongly spiced and traveled well. At the time, anything flavored with spices was called ginger, and Roberts has records showing that ginger cakes were sold by the town tavern in the 1700s. The bakery that became Winkler started later, in 1800, and began baking ginger breads and ginger cakes a few years after that. 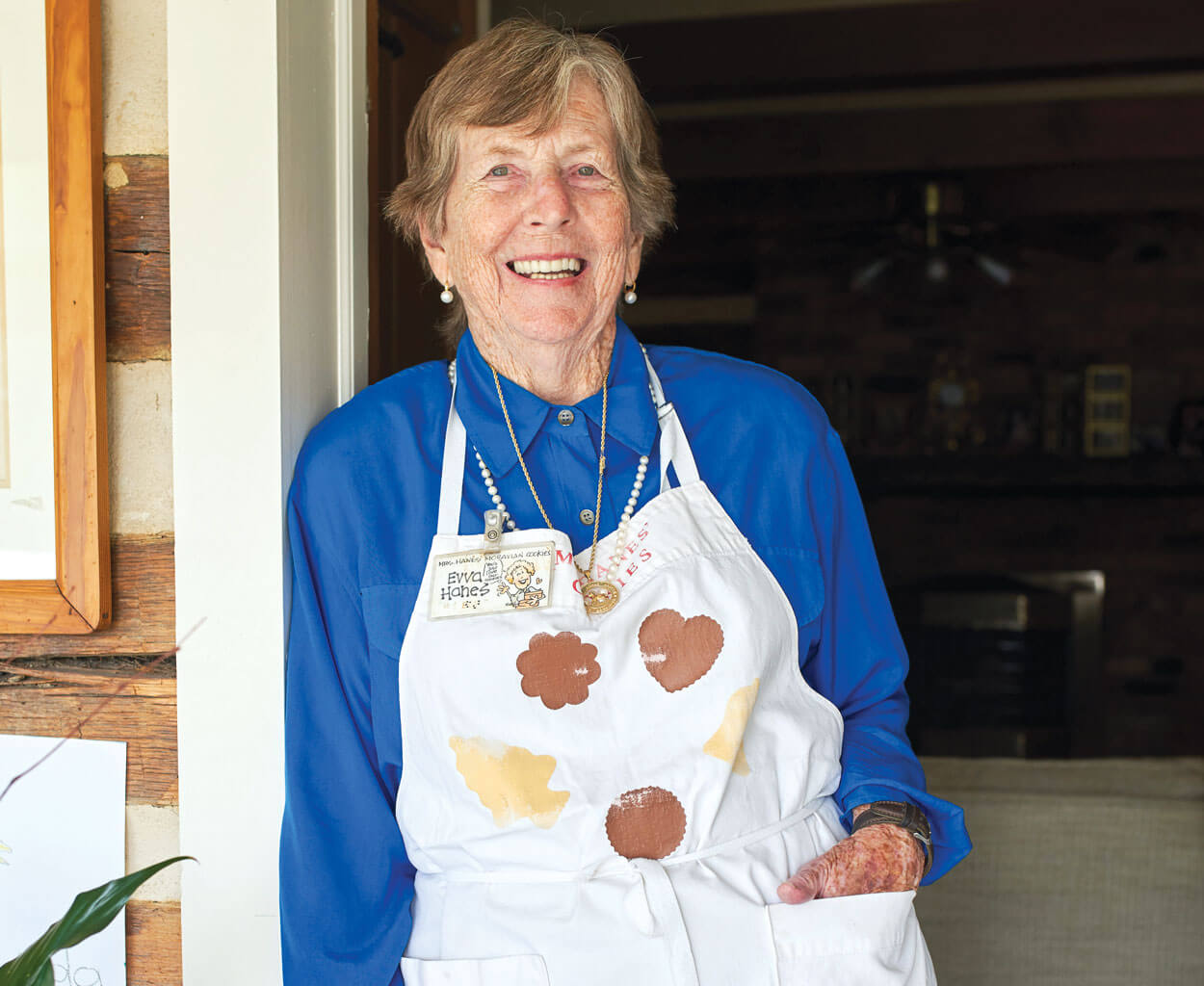 Evva Hanes’s mother started a Moravian cookie company out of the family’s farmhouse. Today, the company, Mrs. Hanes’, bakes more than 10 million cookies each year. Christmas demand is so high that they start packing holiday tins in July. photograph by Joey Seawell

By the mid-1800s, the word “cookie” came into style, along with leaveners like baking powder, which made cakes into something lighter and softer. Moravian bakers began to roll out their dough much thinner, either to increase the yield or to bake faster in wood-fired ovens. They cut the dough into simple shapes, usually circles and hearts, using tin cookie cutters that were cheaper to make than the old carved wooden molds.

Today, Winkler Bakery is a beloved tourist stop, where, on Saturdays, costumed docents use old-fashioned tools to roll out and bake cookies. One docent, Sister Deborah Crews, says that locals come in for a lesson in getting their dough thin enough.

These days, though, almost all Moravian cookies are produced by Dewey’s Salem Baking Company and Mrs. Hanes’, started by Evva Hanes’s mother in the family farmhouse in nearby Arcadia, before the family built a factory next door in 1970. At Mrs. Hanes’, you can watch through a plate glass window as bakers hand-roll and cut out thousands of pounds of dough each week. The company’s bakers turn out 10.3 million cookies a year, shipping tins and tubes all over the world.

All of which is to say that state legislators weren’t exaggerating when they wrote into the cookie bill: “Whereas, the Moravian cookie is one of the most popular cookies in North Carolina.” For her part, Evva Hanes is so certain that the bill will pass that the company kitchen is working on experimental batches of NC-shaped cookies. Mr. Phillips’s fourth graders, who are now sixth graders, will surely be first in line for the novelty version. Undaunted by the glacial pace of progress, Phillips, too, is optimistic that the bill will eventually find its way to Gov. Roy Cooper’s desk and be signed into law.

“We’re keeping our fingers crossed. Wouldn’t it be great to get him to come to Greensboro, to sign it with the students there?” Phillips says. We’re coming up on an election year, too, he points out, and who votes against cookies and schoolkids before an election?