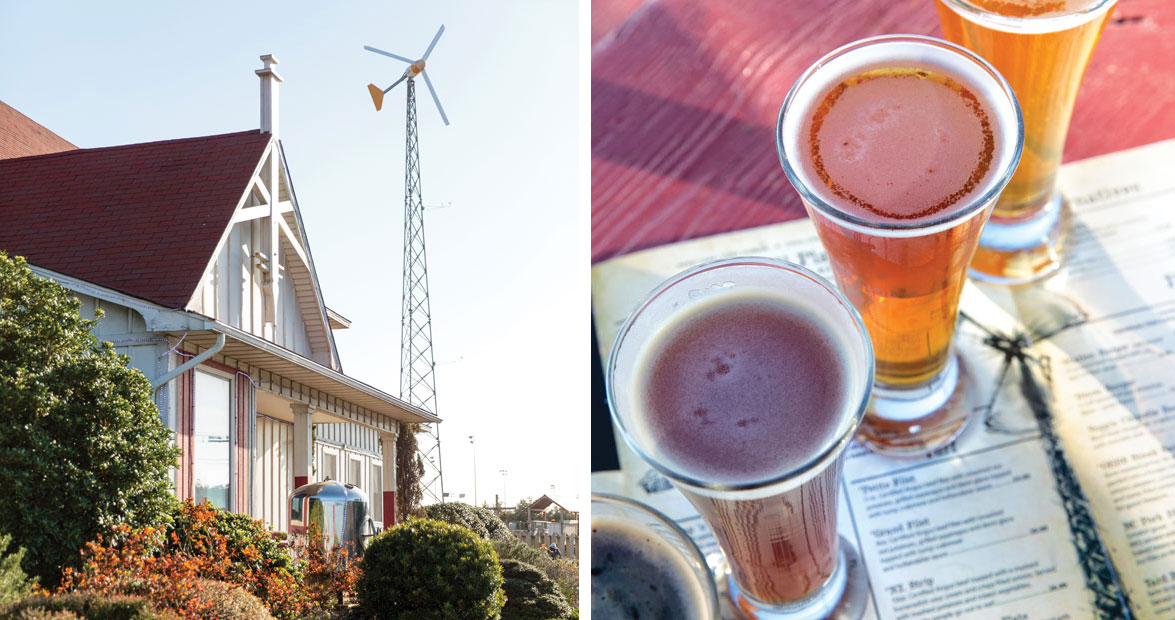 The average wind speed in Kill Devil Hills is around seven miles per hour. You’d think it’d be higher, right? Still, it’s consistent enough to keep the wind turbine at the Outer Banks Brewing Station spinning almost constantly. At this moment, there’s a front pushing through, along with some 35-mile-per-hour gusts. “That thing is crankin’,” says one of the owners, Aubrey Davis.

Davis says he should have been a meteorologist. He was a civil engineering major in college, and now he runs one of the three places that make beer on the Outer Banks. When he and his three partners built this brewery and restaurant in 2001, they wanted to make it as green as possible. They didn’t have a lot of money. Solar power was more expensive in those days. A wind turbine was cheaper, and it seemed like a natural fit.

It took seven years of back and forth with town officials before, on Earth Day 2008, Davis and the rest of the owners switched on the only restaurant or brewpub in the nation with a turbine on site. At 92 feet tall, it’s a bit of a landmark, too. People see it when they’re up on the dunes at Jockey’s Ridge State Park, or visiting the Wright Brothers National Memorial. It’s a lighthouse for the lunch crowd.

“That’s not the reason we put it in,” Davis says. The turbine helps cut down on the Outer Banks Brewing Station’s hefty power bill — it costs a lot to heat and cool a restaurant and bar with a peaked 35-foot-tall ceiling — and Davis is trying to save money in an environmentally friendly way. “I’d have the roof covered in solar if I could afford it,” he says. “Maybe in the next couple of years.”