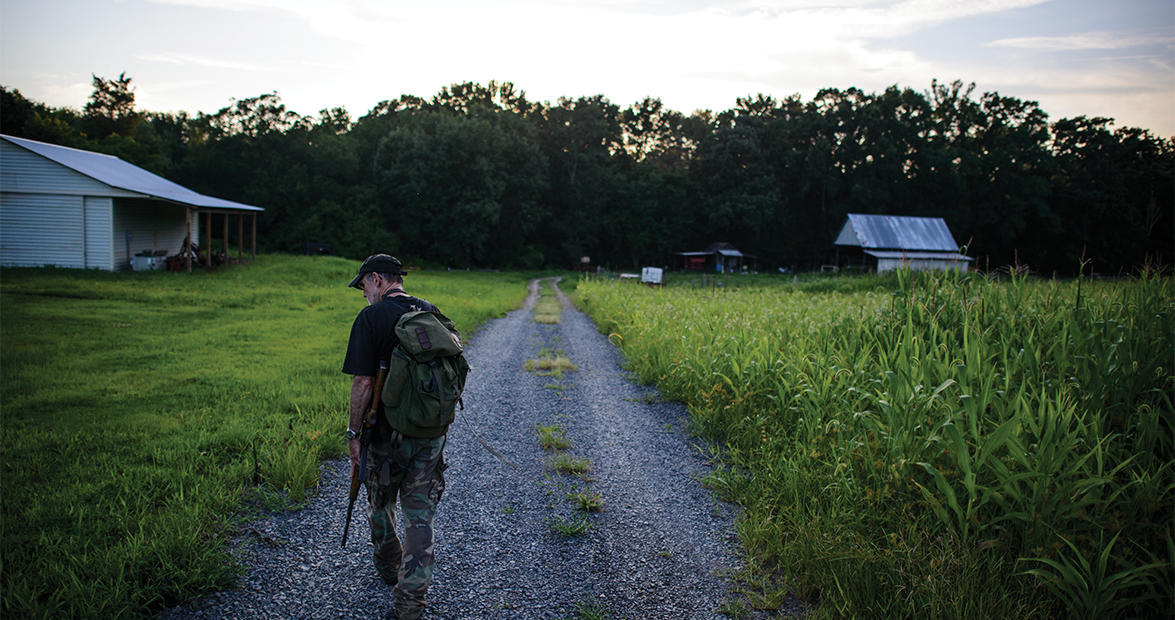 Rick Thompson is passionate when he discusses why he joined the resistance.

Standing in a barn in the woods near Mount Pleasant, east of Charlotte, Thompson recalls the pain of watching his country turn into a police state.

He talks about the anguish of losing his wife under suspicious circumstances during the United Provinces of Atlantica (UPA) coup.

That’s why he took up arms to free his people.

“Coalition forces are coming in from the South,” Thompson says, his tone grave. “Our job is to delay the UPA forces.”

Like a method actor, Thompson is so good at his role that it’s hard to believe his story is fiction — concocted for Robin Sage, the final exercise in the U.S. Army’s Special Forces Qualification Course Training.

Thompson is one of about a dozen “G-chiefs” — all with Special Forces experience — working in Pineland. Eight times a year, Special Forces students from Fort Bragg arrive in Pineland, which covers 15 counties in central North Carolina, to organize a guerrilla force hell-bent on overthrowing an oppressive regime on the eve of an American invasion.

During the intense two-week exercise, Thompson transforms from a retired soldier to a guerrilla commander waging a desperate campaign for Pineland’s freedom against the oppressive forces of the United Provinces of Atlantica. Using actual missions in Iraq, Afghanistan, and Colombia as a template, it’s one of the most authentic — and unconventional — warfare exercises in the world.

But the key to the exercise is the Pinelanders, who, like Thompson, bring the fictional country to life for the students.

Thompson grew up in Stanly County, and after serving in the Marines and finishing his career in the Special Forces, he returned to play the role of guerrilla chief, or “G-chief,” in the massive exercise. He has recruited locals to play all kinds of roles, from providing land for base camps to loaning out their barn for a field hospital after a raid, creating a diverse and authentic battleground for the students.

“All the people we use I’ve known for years,” Thompson says.

Robin Sage has been conducted with help from local citizens since 1974. Before that, the exercise was smaller and held under different names. 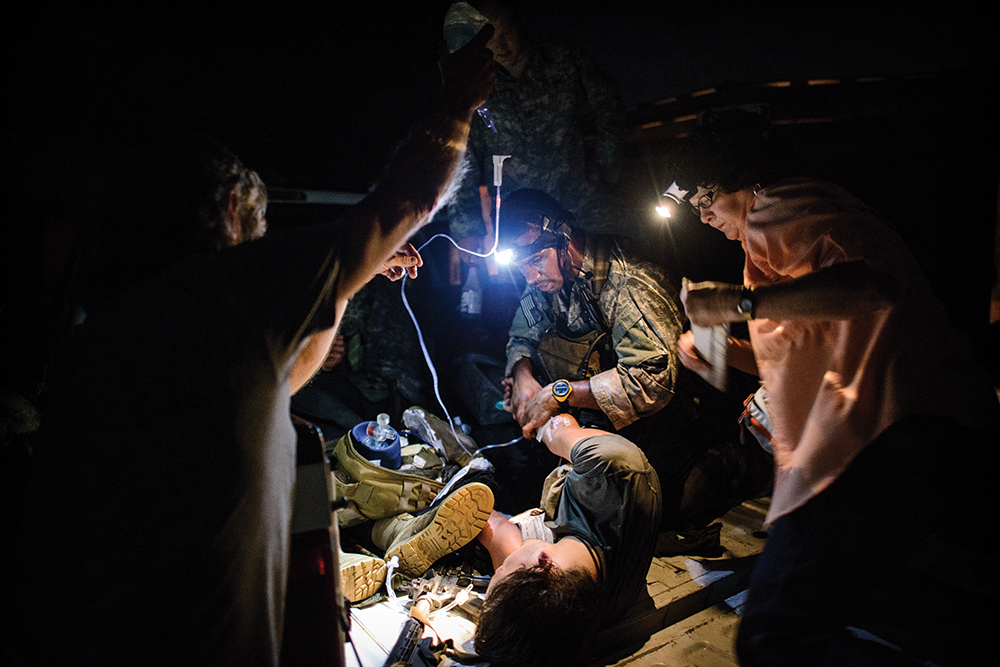 A Special Forces student works on a “wounded” guerrilla with the help of local role-players at a makeshift hospital on Jim and Ann Nance’s property during the Robin Sage exercise. photograph by Andrew Craft

Lt. Col. Grant Martin, who oversees Robin Sage, says the exercise would be impossible without regular North Carolinians chipping in to help. The military has tried in the past to use contractors, he says, but nothing can replace real towns and real relationships.

“You want to create, as much as you can, a complex and real environment with real dilemmas,” Martin says. “It is difficult to do that without people basically playing themselves.”

Thompson is short and lean with a trim gray beard. He wears black jungle boots covered by camouflage pants. A headlamp hangs around his neck, and a sweat-stained Jim Beam baseball cap covers his head as he marches to a base set back in the woods near a farm.

Thompson almost never breaks character. He refers to the students as the “Americans” and talks about the United States like it is another country, far from the reality of Pineland.

His Pinelander bio comes straight from central casting. A former prison warden, his wife was killed soon after the UPA occupation. The UPA, Pineland’s northern neighbors, sided with the Soviet Union during the Cold War. Unlike the Pinelanders, they’ve had an antagonistic relationship with the United States. Thompson couldn’t stand pat after the coup and installation of martial law.

He served with several units before retiring in 1991. He worked for a few more years for the government before returning to his hometown near Mount Pleasant.
When he isn’t a guerrilla, he is a self-proclaimed “professional tourist.” He’s traveled the world: He ran with the bulls in Spain and hiked the Appalachian Trail.

When Thompson arrives at the camp, the students are huddled around a map. They jump up to greet him as he enters. Cameron Johnson, a rival guerrilla chief, is also at the meeting. Thompson gets Johnson’s attention.

“We need to have a Pineland discussion,” Thompson tells the students.

Thompson and Johnson march off into the woods, leaving the students to plan the mission. It is an important lesson, testing the students’ ability to sell the plan to the G-chiefs.

“It’s their Robin Sage,” Thompson says. “We let them make as many decisions as possible.”

After meeting with Johnson, Thompson returns to the camp to listen to the plan. The mission is to liberate “Robin Hayes,” the future secretary of defense of Pineland. The character is named after the former Republican congressman from Concord who donates land for training. 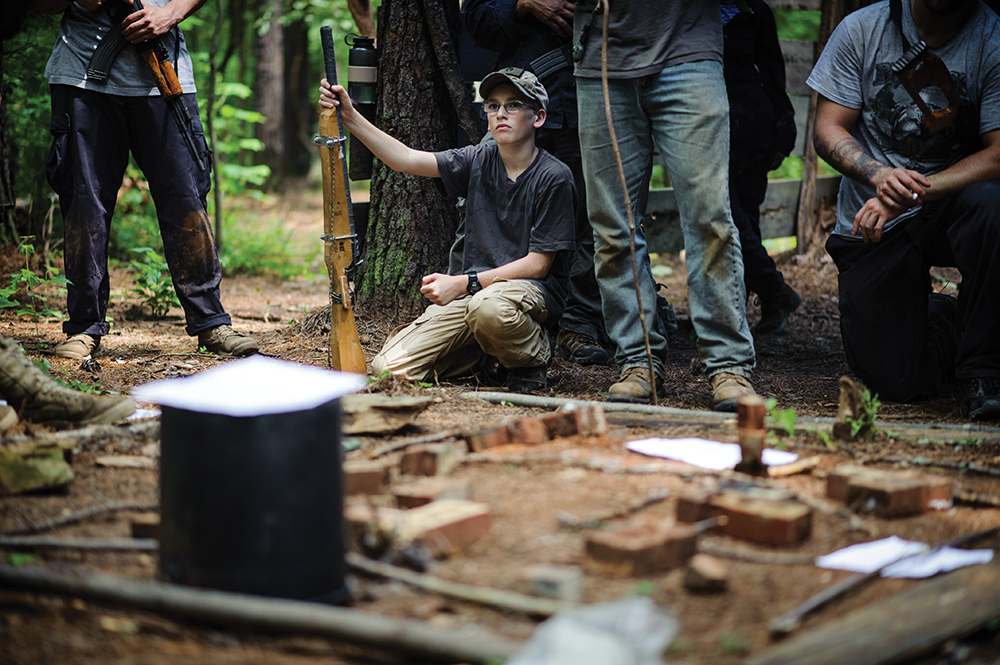 Billy Nance, 14, playing the part of a guerrilla fighter, listens as Special Forces students go over their plan, with a makeshift map, to rescue “Robin Hayes” from UPA prison during the Robin Sage exercise. photograph by Andrew Craft

The plan is simple: Thompson’s G-band will provide security while Johnson’s G-band liberates Hayes. Thompson objects to being part of the security team. He wants his men inside the prison liberating Hayes.

“Robin Hayes is going to be our secretary of defense, and that is the most important thing in my life except for the lives of my G-band,” Thompson says.

He delivers the line with such conviction that you get the sense he really believes Robin Hayes will be at the prison (he isn’t), and that Hayes will one day head up the Pineland armed forces.

After some heated negotiating, Thompson’s men get to liberate Hayes.

As the guerrillas gather in the camp the next day for the mission, Thompson shows up with a 14-year-old boy named Nathan Nance, nicknamed “Billy the Kid.” Thompson knows the boy’s father, a retired Green Beret, and he offers to take Billy along on the mission.

Sporting a gun made of wood, Billy the Kid will take part in the attack. The night before, the Special Forces students tried to talk Thompson out of it, but Thompson compared Billy the Kid to the drummer boys who marched in the Civil War.

“Would you not call them heroes?” Thompson says. “If Billy wants to fight for his country, then who am I to tell him no?”

The rest of the day, the students and guerrillas practice and prepare to attack the prison. Long abandoned by the state, the prison is an old, dilapidated facility surrounded by overgrown bushes at the bottom of a hill.

As the sun sets behind the hills, the prisoners — all locals who volunteered to help on a Saturday night — sit in the empty cellblock. They lounge on worn plastic chairs. Some of the women play on their phones as they wait.

Just after dark, the students and guerrillas creep through an unlocked back gate before a burst from a blank-firing AK-47 shatters the silence. The guards in the prison spring to life and race toward the roar of the guns.

“Go! Go!” the students yell at the guerrillas.

Just after sunset, the students and guerrillas crept through an unlocked back gate and entered the prison grounds to free “Robin Hayes”, during the Robin Sage exercise. photograph by Andrew Craft

The remaining Special Forces students and the guerrillas rush through the gate. The assault team quickly spreads out around the prison block. The rattle of a machine gun echoes against the brick walls as the guerrillas open fire on the guard tower.

Two teams — the students in the lead — race into the prison block.

Another burst of fire.

Two prison guards lie sprawled out near the cell doors. Inside, the women prisoners scream and beat on the glass begging for help.

The scene — yelling, smoke, the boom of gunfire — is intense. So is the urgency of saving the prisoners.

At the far end of the cellblock, Thompson is pressed against the bars talking to “Robin Hayes” in his cell. It is impossible to hear the conversation over the sporadic firing and yelling.

“Where are the keys?” someone yells.

For a few minutes there is a scramble to find the keys before a guerrilla plucks them off a dead guard. Minutes later, Thompson and Billy the Kid squat in the shadows of the main cellblock. Robin Hayes crouches next to them. Thompson barks in the radio to bring a car around so the future defense secretary for Pineland can escape.

Nearby, three guerrillas wounded in the fight are screaming in pain. Medics — led by the Special Forces students — quickly transport them to a makeshift hospital in a barn not far from the prison. The hospital, on Jim and Ann Nance’s property, was set up in advance, just in case. Inside the barn, Ann Nance has soup and cold drinks waiting for the soldiers.

Billy the Kid waits in the shadows near the barn door. He has survived his first mission as a Pineland guerrilla. Thompson hands him a rifle and tells him to watch for any UPA forces. Billy the Kid nods and moves back toward the road, melting into the shadows. From his vantage point, he can watch the road.

It isn’t inconceivable that, 30 years from now, Billy might be the one handing off the rifle before checking on his guerrillas in the same barn.

Because that is how things are done in Pineland.