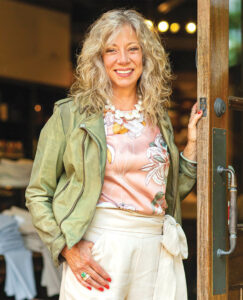 Main Street in Highlands is lined with charming boutiques and stocked stores, but only a few can claim a lineage like TJ Bailey’s. In business for 37 years at the same location, the upscale menswear store bears zero relation or resemblance to the similarly named discount retailer T.J. Maxx. “They sued us for copyright infringement,” says Anita Lupoli, founder of TJ Bailey’s. “But our incorporation papers were filed six months earlier!”

So what about that name, TJ Bailey’s? Lupoli abashedly admits that Baileys Irish Cream was her go-to drink at the 1985 opening when she was all of 22. She borrowed the “TJ” from the name of a friend’s son, “a redheaded freckle-face I loved to death.”

The picture of femininity in pale pink and gray, with a silvery, spiky Icelandic ring on her finger and a head of blonde curls, Lupoli doesn’t fit the image of the founder/owner of a small empire of masculine good taste. But, she says, “when I came up with the idea, I’d just gotten my residential real estate license, and, already, I knew that wasn’t what I wanted to do. There were no men’s stores here, and with four brothers, I had a lot of men in my life, so it was fun.” 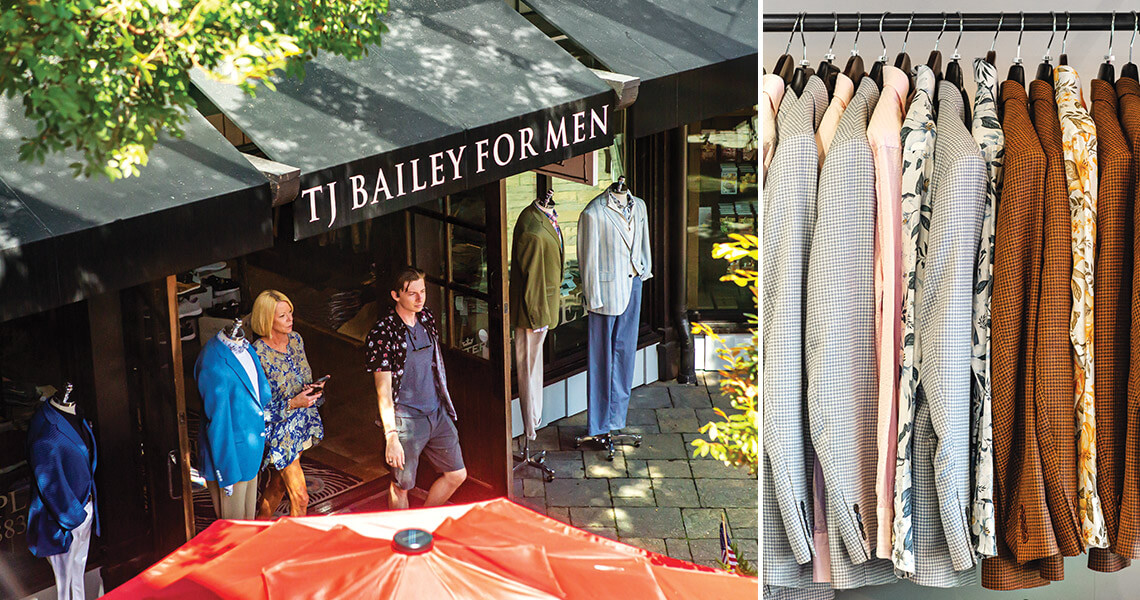 In 1965, when Lupoli was 2, her family moved to western North Carolina from Long Island after her father, who worked for Grumman Aircraft, had worked with a cousin in Highlands for six weeks. Lupoli laughs. “He came back to New York and said to my mother, ‘Pack it up, Marie!’ And I still live a stone’s throw from where we first moved.”

In a similar vein, TJ Bailey’s has occupied its same corner location since Day 1, in a two-story building that was once the Town House Motel before it was converted into shops in the ’80s. The apparel inside the store, however, has definitely changed. “I began in the ’80s with those bright silk jackets — sold hundreds of them,” Lupoli says. “At that time, customers, most of whom were from the Deep South, were here for just the summer months, and then they’d take them back home.” She shakes her head. “It was a learning curve. I couldn’t sell a wool sweater to save my life. Then the clientele got a little younger and hipper; retirees began moving here in their 50s. They were done with the office; they wanted to party.” She shrugs playfully and smiles. “That’s what’s fun about Highlands. You’re on vacation. You’re not pressed for time.”

They seem so quiet, classic men’s stores, so … refined. Hushed and somehow gentle, all dark wood and muted lighting, redolent with the good smells of leather and fabrics. Downstairs at TJ Bailey’s is just that, with sweaters and trousers, shoes and shirts, ties and boxer shorts. Here are needlepoint belts and straw hats, leather baseball caps if you’re feeling a Steven Spielberg vibe, or a felted number complete with a feather in the band if you’re all about The Sound of Music.

Everything seems destined for cool mountain evenings on stone porches, or drinks in rustic living rooms with raised hearths, but be assured: This clothing goes everywhere, from Texas to Tennessee, and from Florida north. Where it doesn’t go is the hiking trail. “I’ve never done Carhartt,” Lupoli says. “If you want gear, you don’t want to shop here. I’ll make you look styled.” Still, she never judges a customer. “We’re in a hiking town. They come in sweaty, and then come back when they’re dressed up for dinner and try stuff on.” Including, these days, “a lot of white, for the croquet court. White pants and shorts and pullovers, white shoes, white belts. Croquet is huge here.” 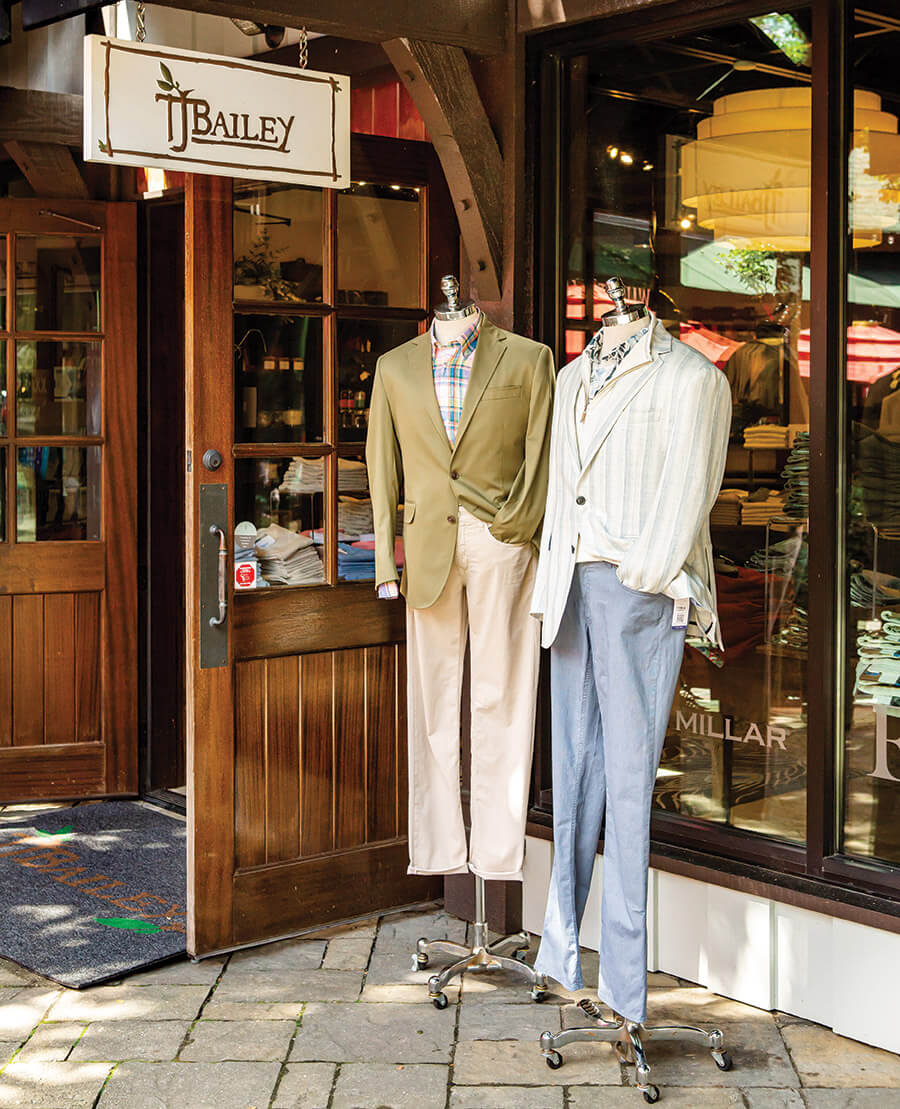 TJ Baileys has been in the same location on Main Street for 37 years. photograph by Tim Robison

But lest you think that TJ Bailey’s is all about low-key conservative attire, here, too, are multi-colored Hawaiian-style shirts, bathrobes with mustaches woven into the terry cloth, and socks featuring motifs like eyeglasses and dollar bills. Beneath old musical instruments — drums and bugles — perched on shelves, you’ll find Dopp kits and leather goods, money clips and shaving soaps and lapel pins made with pheasant feathers, for, well, just for the decorative heck of it.

“Does anyone ever ask for an ascot?” I ask Lupoli. “Occasionally,” she replies. Those are the folks who head upstairs, where a pool table commands the center of a room, flanked by a leather sofa and a full bar with sleek, contemporary stools. On the floor near a three-way mirror, where men are measured and fitted for custom suits and tuxedos, is a petite rack of 12 collar styles, alongside pairs of velvet tuxedo slippers. An opposite wall is lined with tuxedo pants and jackets, testaments to Highlands’ booming destination-wedding status. “I keep suits and tuxes in stock,” Lupoli says, “because every weekend, someone calls in a panic with ‘I forgot my — !’” 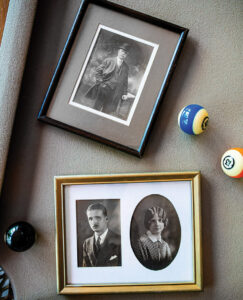 Lupoli honors her past by displaying photos of her maternal great-grandfather Salvatore Mercurio (top), and her paternal grandparents, Georg Ferdinand Salman and Ana Schmitt. photograph by Tim Robison

Upstairs, where the sale room is also located, is a mix of the antique and the contemporary, perhaps best evidenced in old photographs of Lupoli’s grandparents hanging next to a black top hat that belonged to her father. Beneath these tributes to the past are two items that call for a closer look: That mahogany-colored, gleaming-patterned band is an alligator cummerbund that sells for $950. The other — oval-shaped in a shiny jet black with a white “eye” in the center — is a cummerbund made of stingray skin. Oh, and there are coordinating cuff links if you just can’t live without an allover black-and-white look for your formal togs.

All of which makes that tiny faux leather bomber jacket, complete with flight patches and a shearling collar — sized for toddlers — seem like a small-potato purchase. “Grandparents mostly buy those,” a TJ Bailey’s clerk says. No wonder I want it.