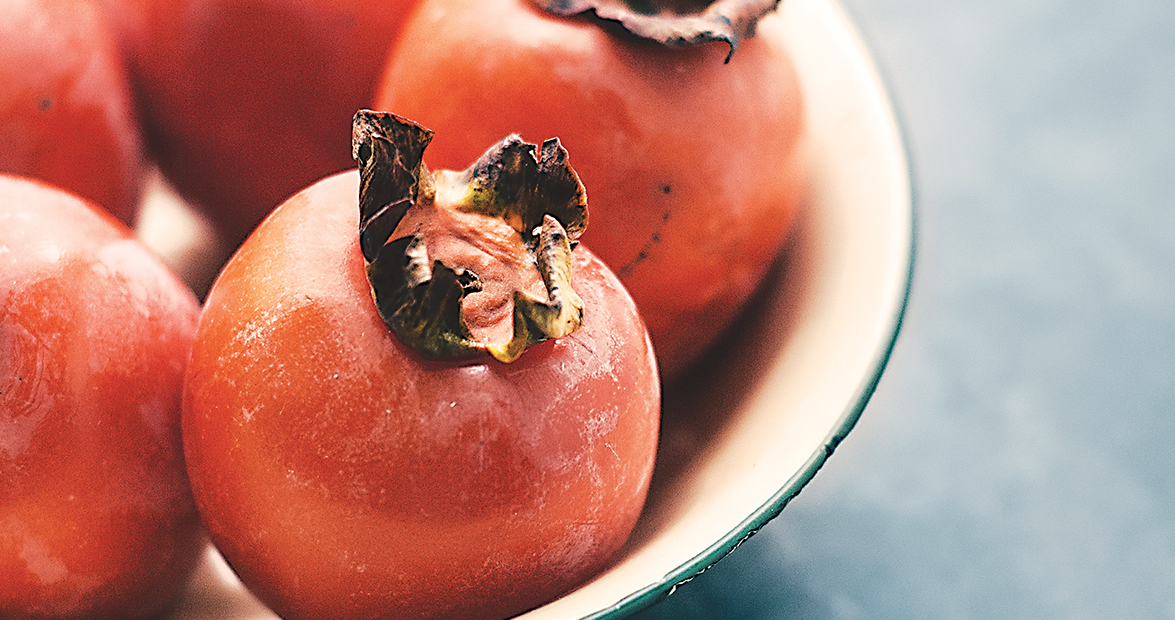 A common American persimmon is Diospyros virginiana, part of which means “fruit of the gods.” You better believe it.

Wild persimmons, the ones the Algonquin called pessemin, are small. A half dozen makes only a handful. But what a treat to hold, and behold. When this windfall fruit drops from the trees after a hard frost or freeze, they’re so soft that their skins can barely contain the sweet pulp, and so ephemeral that they might collapse under a hard stare.

Persimmons were elemental to the diet of Native Americans, who ate them fresh, dried them whole, and used them to make bread and beer. Native Americans introduced persimmons to early colonists, as noted by Jamestown founder Captain John Smith, who, in his Generall Historie (1624), warned that “if it not be ripe it will draw a man’s mouth awry with much torment, but when it is ripe it is as delicious as an apricot.”

It’s true: An unripe persimmon will turn your face inside out. But when they’re ripe or even post-ripe, mercy, that’s a fairy tale about a magic forest where jam grows on trees.

One should never pick a persimmon — they fall to the ground when ripe and edible. Some folks spread tarps or quilts under the trees to collect the night’s drop — what’s not gobbled up by raccoons, possums, and deer, anyway. Forest creatures love persimmons as much as we do, so much so that old-timers nicknamed the trees “possumwood,” and the fruit “deer candy.”

To eat a ripe persimmon is singular. The thin skins are papery, and the silky pulp tastes like a patchwork of fresh apricot, dried peach, guava jam, roasted pumpkin, and a speck of spice or nuts. The flesh encases several flat, dark seeds that resemble guitar picks. Attempting to cut a ripe persimmon is like trying to slice a water balloon. To liberate the pulp, cooks remove the caps and stems, pull the fruit apart, and force it through a food mill or sieve, collecting the pulp and leaving the skin and seeds behind.

American persimmons (even the cultivated ones) are different from the varieties sold in grocery stores: firm, yellow Fuyus or acorn-shaped Hachiyas. Those aren’t bad, but thinking you’ve had a good persimmon when you’ve had only store-bought is like believing you’ve seen Venice after a ride in a Vegas gondola.

Some North Carolina families who have wild persimmon trees on their property work feverishly during the brief season, gathering the fruit and manning a pop-up cottage industry of pressing, freezing, and selling the pulp.

Years ago, I heard about a woman who sold frozen pulp from the trees that had grown on her husband’s family farm for generations. I drove out to buy three dozen bags. Had I known what I was getting, I would have bought all she had and placed a bid on futures. I’ve enjoyed fine persimmons while hiking in the autumn woods, but none like theirs. Most persimmon pulp is golden, burnt orange, or russet. She called theirs red, but that word is inadequate. Their persimmons were the color of a fall sunset, a glowing hue that required all the synonyms available: scarlet, vermilion, crimson, ruby.

I’ve never since seen or tasted a fall fruit more glorious. I’m heartsick that I can’t remember that sweet lady’s name and address. I keep one last bag of their persimmon pulp in my freezer — not to be eaten, but to prove that such a thing exists in North Carolina, like a souvenir from a storybook.

Foraged & Fermented
Sean Lilly Wilson, owner of Fullsteam Brewery in Durham, knows that persimmons are precious. With help from the community — local foragers who supply Fullsteam with hundreds of pounds of persimmons each fall — Wilson brews “First Frost,” a winter ale that makes the most of the sweet Southern fruit. Learn more at fullsteam.ag.