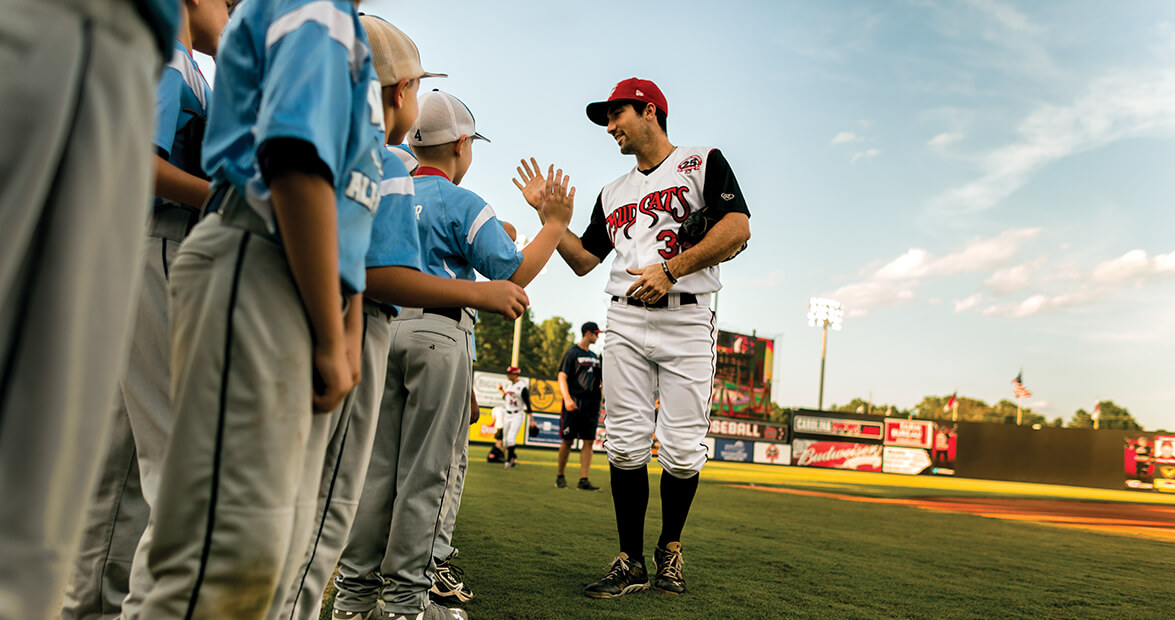 Editor’s note: This story was published in 2016.

A little fan sees eye to eye with Ted E. Tourist, mascot of the Asheville Tourists, a team name coined by sportswriters in 1915. The earliest Asheville baseball team dates to 1897, and since 1924, the team has played at McCormick Field. Thanks to renovations, 4,000 fans can check a scoreboard that says “Visitors” in the away slot and “Tourists” in the home slot, a pun that Babe Ruth, Jackie Robinson, and Lou Gehrig saw when they played exhibition games here. 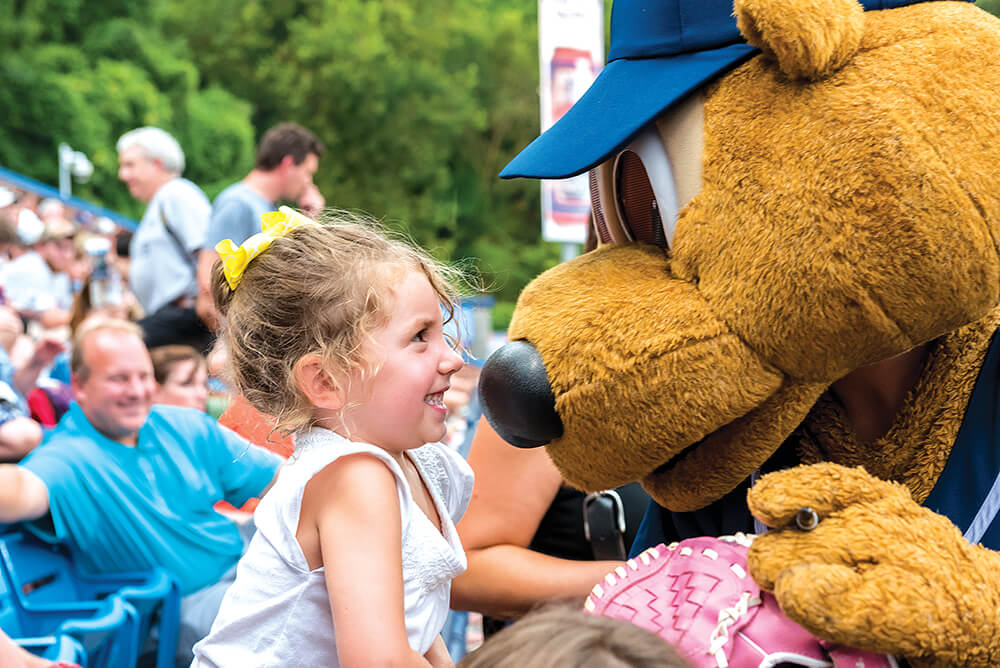 Editor’s Note: Beginning with the 2021 season, the Appalachian League was reorganized as a collegiate summer baseball league, and the Royals were replaced by a new franchise — the Burlington Sock Puppets — in the revamped league designed for rising college freshmen and sophomores.

The Burlington Athletic Stadium, which seats 3,500 and was originally built in Danville, Virginia, was dismantled, moved south, and reconstructed in Burlington in 1958. In 1988, it was the site of a 27-inning, 8-hour 15-minute game between the Burlington Indians and the Bluefield Orioles. The announcer, Richard Musterer, still holds the record for the longest continuous single-game solo broadcast in baseball history. Here, a Royal heads into the bright lights, while another younger version dreams of them. 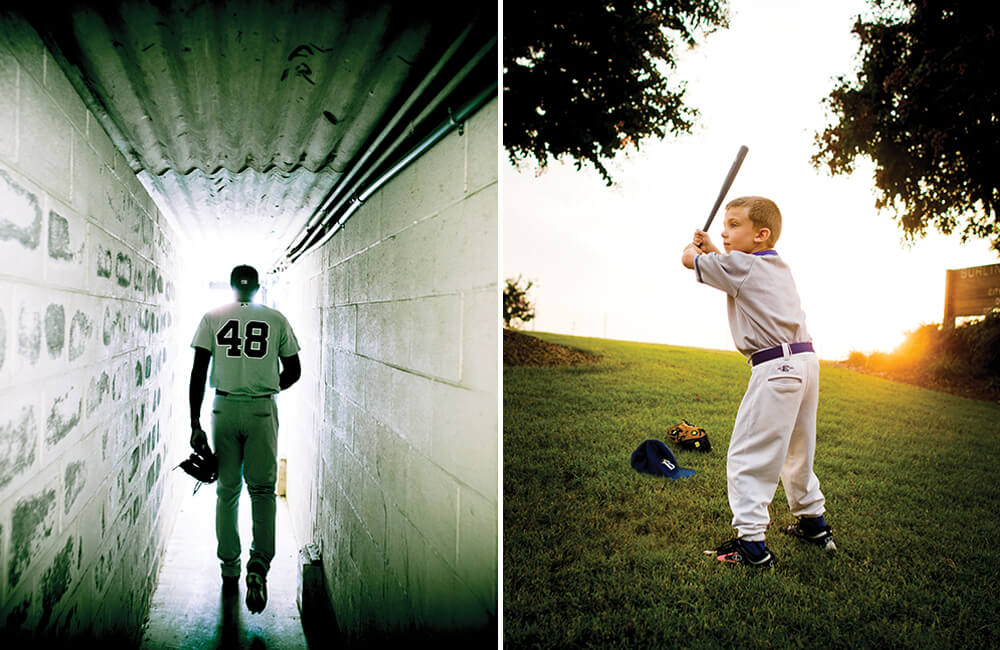 In 1988, Steve Bryant of Raleigh bought the minor league ball club in Columbus, Georgia, and planned to move it to North Carolina, but not before implementing another change. After a “Name the Team” contest in the off-season, the team started calling themselves the Mudcats. The franchise ended up selling every hat they’d ordered for the entire season — nearly 1,500 in all — on opening day. Today, the Mudcats play in Zebulon, near Raleigh, and fans from Wake, Franklin, Nash, Johnston, and Wilson counties cheer them on from — where else? — Five County Stadium. Nothing runs like a Deere, driven by a Mudcat. 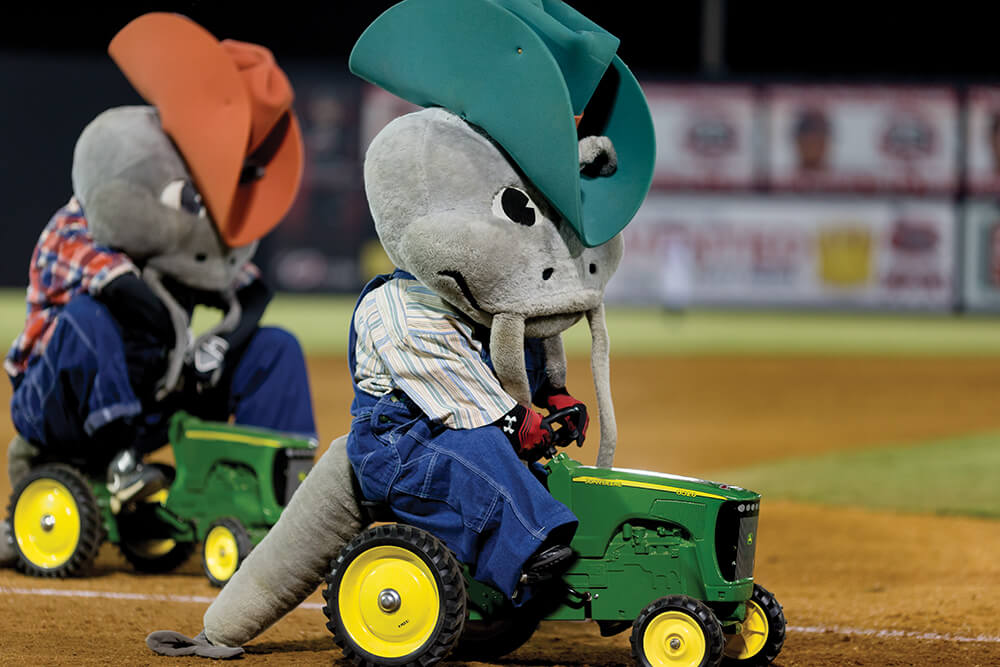 Fly balls are more impressive when you’re surrounded by lofty skyscrapers at BB&T Ballpark. Professional baseball in Charlotte dates back to the Hornets, in 1901. The team played in the Dilworth neighborhood for decades before moving just across the border to South Carolina from 1990 until 2013. Now, like a lot of Charlotteans, they’ve moved Uptown. 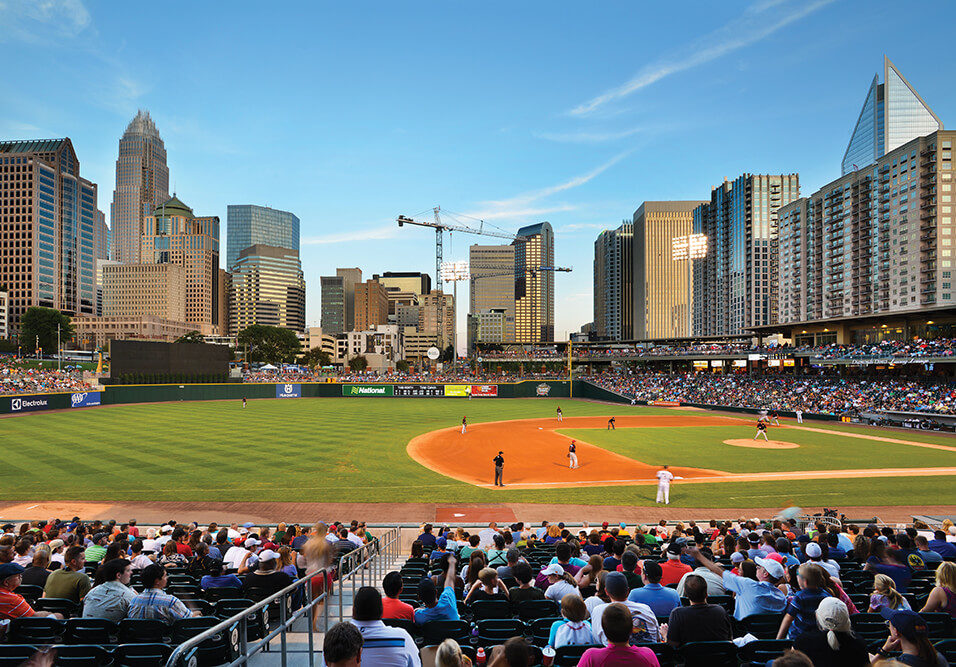 The beauty of minor league teams is the way they reflect their, well, home base. So it’s no surprise that the Durham Bulls began in 1902 as the Tobacconists. Since 1995, the Bulls have played at Durham Bulls Athletic Park, known in these parts as “DBAP.” As depicted in the 1988 movie Bull Durham, loosely based on real-life North Carolina minor leaguer Crash Davis, a snorting bull with fiery red eyes is perched atop the outfield fence. After a home run, smoke pours from his nostrils. Young fans with gloves in hand plan to catch one. 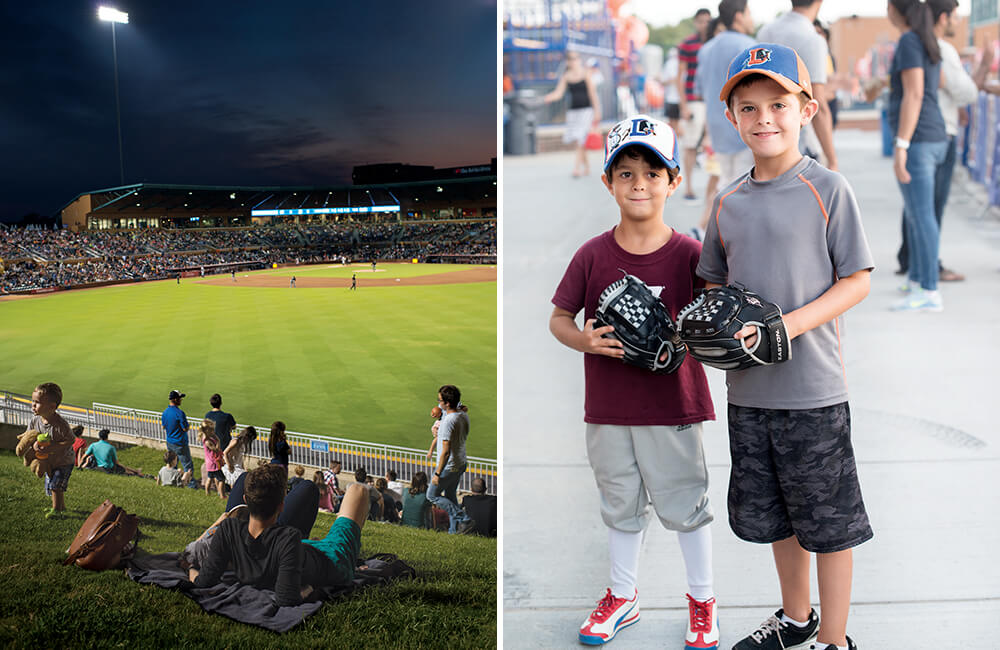 As American as Uncle Sam and the Stars and Stripes, baseball in Greensboro is all about the “Hoppers,” as in-the-know local fans call their team. After decades of play at the circa-1926 World War Memorial Stadium, the team (formerly known as the Greensboro Hornets), moved up the road to a new stadium in 2005. In 1992, an 18-year-old Derek Jeter started his legendary run in a Hornets uniform. 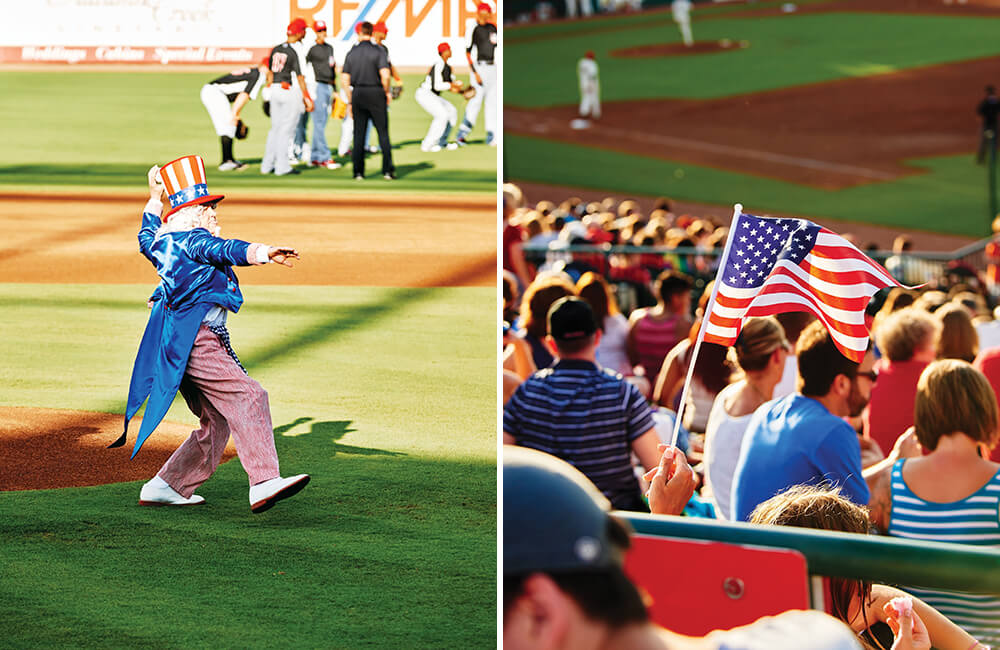 You may know those freshwater crustaceans as mudbugs, crayfish, yabbies, or spoondogs. But in Hickory, they’re the Crawdads. The team plays at L.P. Frans Stadium. Built three miles from I-40 in 1993, the stadium seats 5,062 fans and is home to the Crawdad Cafe. The team has appeared in the South Atlantic League playoffs 10 times and won the championship in 2002, 2004, and 2015. 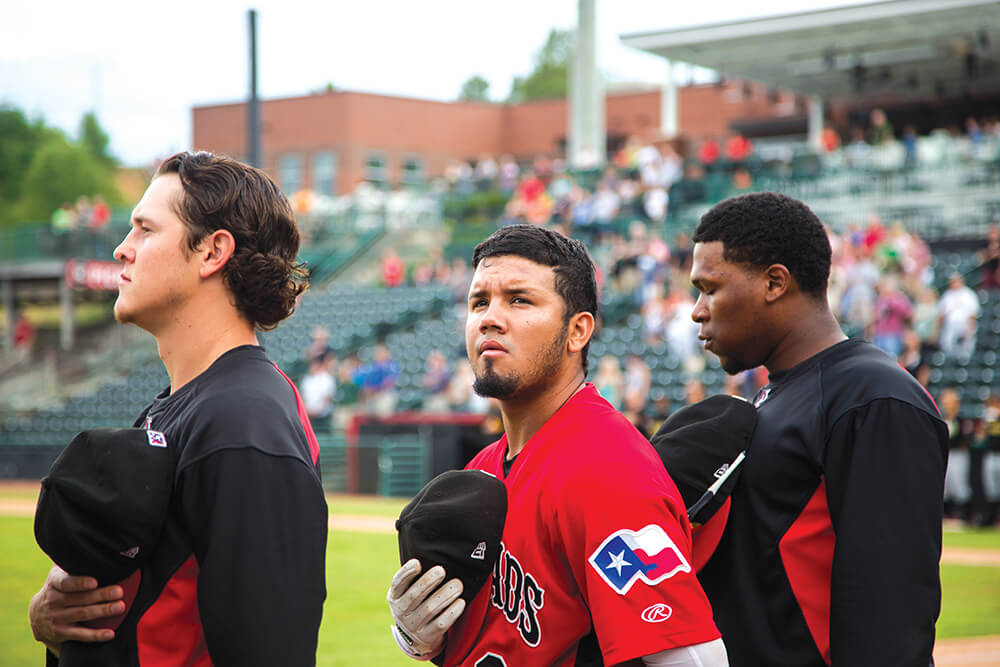 Alliteration, cleverness, and context figure heavily in debates about home-team names. Kannapolis was once known for its cotton mills, so for a while, the Boll Weevils seemed a fitting team name. But when Dale Earnhardt Sr. bought the team in 2000, it adopted the NASCAR driver’s nickname. Even the logo was designed by Sam Bass, who’s responsible for many paint schemes and uniforms for NASCAR. When Earnhardt was killed in a wreck at Daytona in 2001, the team retired his car number, 3, in deference to his memory. 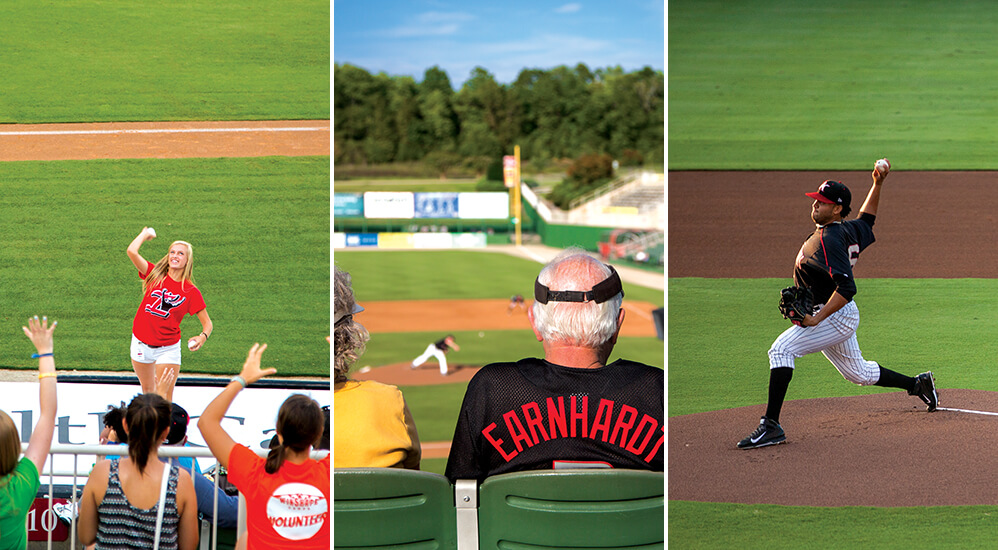 Since its creation 70 years ago, the Carolina League has fielded anywhere from four to 12 teams. But the Winston-Salem Dash holds the record as the only team that’s played in the league since its inception — and has nurtured more than 40 major league All-Stars. In 2010, BB&T Ballpark welcomed the Dash downtown, and — win or lose — lights up the nighttime sky to celebrate those boys of summer. 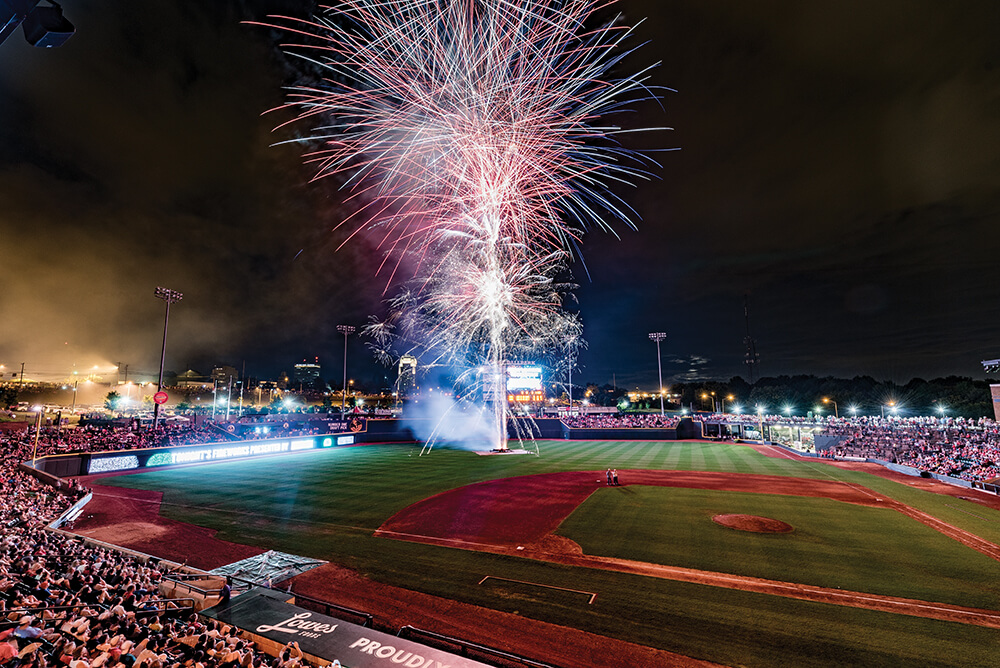