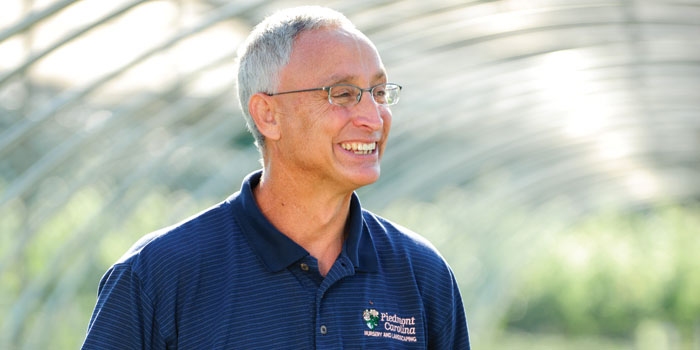 Mark Peters loves this time of day. Peters pulls into his nursery right before daybreak, stops at the top of the driveway, and watches the sun bathe his plants in a blanket of first light.

Sometimes, he sees deer, foxes, or possums. But mostly, at his spot a few minutes from Interstate 40 in Colfax, in the country part of Guilford County, he sees colors grow across his swath of green and remembers the courteous car dealer, slender as a fence post, tough as a nail.

He owned a car dealership in Kernersville. But Ciener liked nothing better than digging in the dirt, growing vegetables and flowers, and riding his tractor with his black cowboy hat, his sons by his side.

Peters now owns the 40 acres of land with his brother Myles and his friend and well-known landscape designer Chip Callaway. Together, they created Piedmont Carolina Nursery, a wholesale operation that finds work from Florida to Massachusetts.

At 54 years old, broad-shouldered and fit, Peters looks like an athlete. He wrestled in high school and college, and ran marathons. Today, he walks miles around his rows of trees and shrubs, flowers and climbing vines.

He knows the geography and growth cycle of every plant he passes. Many of them have names only he can pronounce. Others are examples of North Carolina heirloom plants used in yards for at least a century.

The old-timey plants are forever memories for generations because of their names, shapes, and smells. It’s that memory of an aunt or uncle in work gloves and a trowel, working the soil, surrounded by the faint fragrance of earth.

Peters knows those sentiments well. He stops in midstride when he sees a mountain sweet box and sucks in his breath.

“It has a fragrance that’ll knock your socks off,” he says.

Peters has walked Piedmont Carolina Nursery for nearly 30 years, ever since coming to help Ciener with a side business that Ciener operated in a Quonset hut with his two young sons, Greg and David.

One day, Peters and his first business partner, Brad McLamb, found a few beds, full of weeds and about 20,000 plants, behind Ciener’s house and barn. That winter, they covered the plants with plastic held down by old tires.

But Peters doesn’t think in numbers. He thinks in moments.

About 30 years ago, Peters, a graduate of North Carolina State University with a degree in horticulture, needed a job.

Two Greensboro nurseries turned him down, so he managed a health club to pay the bills. He worked 12 hours a day, seven days a week, for $2 an hour. Meanwhile, he and McLamb started a landscaping business on the side.

They had a dump truck and a small pickup. Then, they heard about Ciener and his postage-stamp nursery in Colfax. They met him in October 1982, and Ciener suggested that they continue talking about their business possibilities.

Peters and McLamb shook hands with Ciener. Two months later, thanks to a snowstorm with 50-mile-per-hour winds a week before Christmas, they lost every plant they owned.

But the storm didn’t faze Ciener.

“Go home, have a nice holiday, and we’ll do what we can Monday,” Ciener told Peters and McLamb.

It didn’t happen Monday. It took another eight months. Peters and McLamb went to a trade show in Asheville to network with other plant growers, and there, walking around, was J.C. Raulston, Peters’s mentor from N.C. State.

He gave Peters advice, sent him cuttings of plants, and suggested what he should grow. He wrote Peters letters filled with recommendations, and he often ended with the phrase: “Plan and plant a better world.”

In 1983, a guy driving a black Cadillac pulled into the nursery, saw Peters, and rolled down his window.

“Hi, I’m Chip Callaway,” the man said. “I’m looking for Mark Peters. J.C. Raulston told me to get in touch with you.”

Four years later, McLamb left. But Peters stayed, and the business relationship between him and Callaway grew. They started putting in gardens in Greensboro neighborhoods, and eventually, Piedmont Carolina Nursery began installing Callaway-designed gardens throughout the Southeast.

Peters’s competitive drive helped. And he learned long ago to respect and appreciate the land. His dad was a systems analyst for a textile company. But he was also a gentleman farmer and a self-taught carpenter who raised cows; grew vegetables; and built houses, furniture, and patios.

Peters grew up the oldest of three boys, and all of them worked on the 26-acre family farm in Oak Ridge, where work gloves and sore shoulders were expected and their father’s mantra was: “Work, work, work.”

Peters knew hard work, which went a long way in his relationship with Ciener.

“Mark reminded Dad of himself,” says Paul Ciener’s son David. “Dad saw a caring person, a family man who wanted to succeed, and he wanted to make that happen.”

‘Connected to the earth’

In 1998, Ciener called Peters to his bedside at Duke Medical Center where Ciener was dying of colon cancer.

“I want to start an arboretum in Kernersville,” Ciener said, “and I want you to help see it through for me.”

“I miss him,” Peters says as he stands near Ciener’s old barn back at the farm where Piedmont Carolina Nursery started. “I can come here, and even though I can’t put a hand on him, I still feel like he’s still here.

“It’s not just about making things look pretty. It’s about being connected to the earth, about planting living things that produce oxygen, about providing a protective habitat for birds. These are the kind of things that soothe our souls. That’s important stuff.”

Jeri Rowe, a Greensboro resident, is a staff columnist for the News & Record. His most recent story for Our State was “Big-Screen Classics” (December 2011).