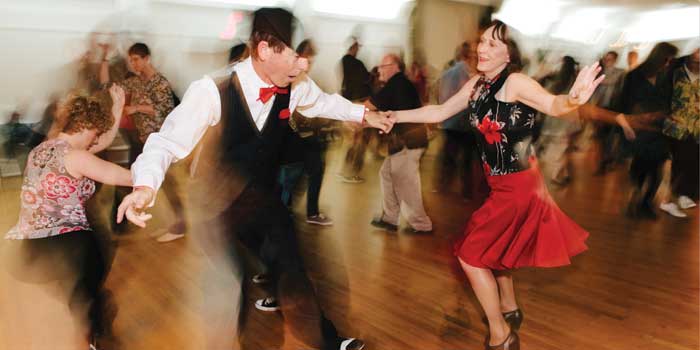 It’s the type of place where dressing up in your vintage zoot suit or donning a dapper polka-dot dress is not only accepted, but encouraged. It’s a place where big band instruments gleam under stage lights, their jovial sounds filling the entire room. It’s a time, twice every month, in which you can put on your favorite pair of dancing shoes, grab a partner, and jitterbug all night.

At the Piedmont Swing Dance Society (PSDS), you might easily forget you’re in the 21st century. Instead, you’re transported to the Roaring Twenties, when you couldn’t escape the swing-dance fervor and jazz-music craze.

The rejuvenation of swing dance in the Triad began for PSDS president Erik Tatsapaugh when he spotted a small piece of paper tacked on the wall of a laundromat that advertised $5 swing-dance lessons. “I figured 5 bucks, if I didn’t like it, I lost 5 bucks,” he says.

But Tatsapaugh loved it. He started taking weekly lessons. A year later, through flyers and word of mouth, more than 120 people were packing into the Greensboro Ballroom to learn basic jitterbugging.

The club was officially named the Piedmont Swing Dance Society in 2000, when the instructors decided the weekly lessons were attracting enough people to make it a twice-monthly event. The society still remains a nonprofit that meets at the Greensboro Shrine Club and at the Vintage Theatre in Winston-Salem.

With her cheerful polka-dot dress, classic black-and-white swing shoes, and bright red lipstick, Katie Brown is easy to spot in the crowd. She smiles as she moves easily in and out of Lindy Hop steps, expertly twirling, her dress spinning in response to her movements.

For Brown, a graduate student at Appalachian State University, paying homage to the era of swing dancing through vintage-inspired clothing is part of the experience.

It is this joy and nostalgic sentiment that draw the community to the Piedmont Swing Dance Society.

Thomas Anderson, a regular, learned to swing dance after he retired. He hasn’t stopped swinging since and has broken out of his bashful ways.

“It made me a nervous wreck at first,” Anderson says.

But after dancing to rock ’n’ roll tunes in his basement and practicing the basic jitterbug moves, he was able to dance in front of crowds, and speak his mind a little better.

“I’m really not bashful now,” he says, laughing. “It’s hard for me to be quiet when I have something to say.”

For Anderson and other PSDS members, the experience is what keeps them dancing.

To learn more about PSDS and see a listing of events, visit piedmontswingdance.org.

Ashley Fahey, a recent graduate of Elon University, was an editorial intern at Our State in fall 2012.