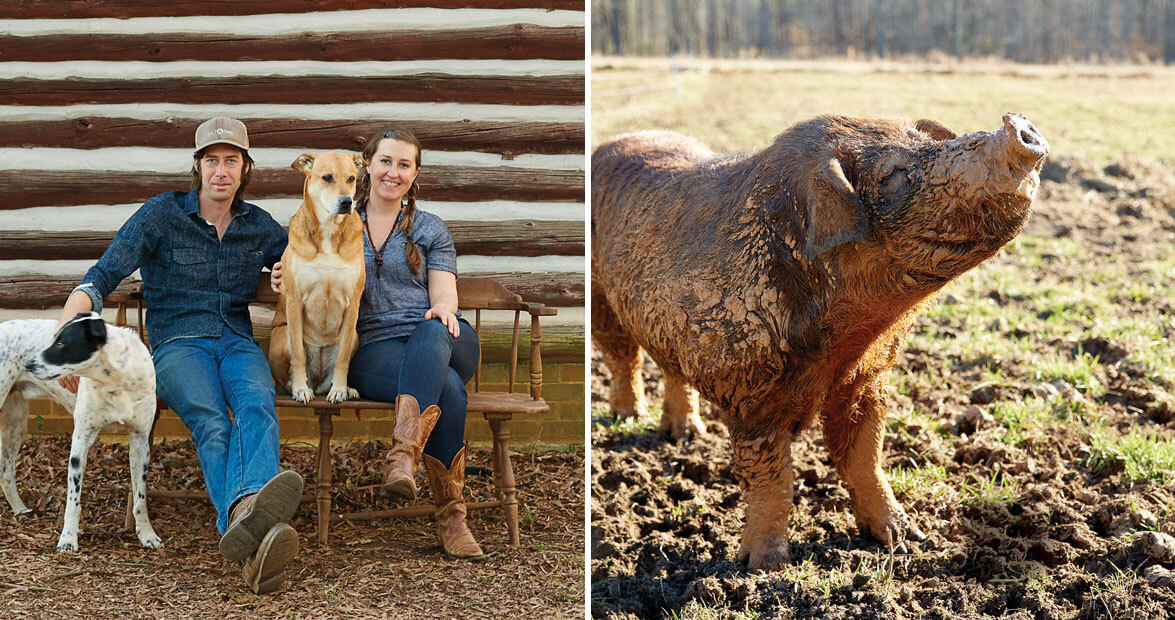 A Tamworth sow is about the size of a claw-foot bathtub and weighs between 400 and 600 pounds. They’re lying, some of them, nose to nose in the sun-soaked pasture, and while they’re peaceful, “grace” is not the first word that comes to mind. Mainly, I’m just astonished at the sheer bulk of them. I ask Hillary and Worth Kimmel, “Why Tamworth, why this particular breed?” They do well in all kinds of weather, Worth says, which is necessary in the Piedmont. “And they’ve got great mothering skills,” Hillary adds. Half of the next question is out of my mouth before I realize: That’s the entire ethos of the Kimmels’ operation, PTB Farm, right there. Of course the pigs have great mothering skills. They’re a heritage breed. They’re meant for an outdoor life, meant to forage across pastureland and forest. They’re meant to be part of a farm run exactly this way, which is to say: on a scale and in such a manner as to be responsible to the land.

“We’re young and strong and maybe dumb enough to think that we can do it all,” Worth says. Hillary nods. “This is just our fifth year here together,” she says. “We’re still figuring it all out.” They met around a bonfire at a party, discovered they’d both gone to Warren Wilson College, both had a family history of farming. They tried a year on Hillary’s family’s land in Boone, but settled back down here, in Reidsville, on these 118 acres that have been in Worth’s family since the 1950s.

“I’ve always had a need to be working outside,” Worth says as we walk downhill to meet Oscar, the boar. “Never considered an inside job.” Oscar’s a Duroc, though they’ve had other boars of other stock — Tamworth, Berkshire. They prefer crossing heritage breeds, Worth explains. It gives the pigs a perfect lean-to-fat ratio.

Hillary’s story isn’t quite as linear as her husband’s. “In college, it felt like the world was big, and I wanted to explore it,” she says. “I wanted to get as far away from the farm as possible.” Oscar ambles our way. His coat is a glossy reddish-black. The wire fence between us doesn’t seem, on first glance, to be at all sufficient — Oscar is a truck. “But then I came back home, and it turned out everything I was interested in — social justice, environmentalism — all of that was in farming.” She shakes her head and clicks her tongue at Oscar, who stops. “I’m glad the sows aren’t in heat,” she says. “When they’re in heat, he stinks. He reeks of boar musk. It’s awful.” 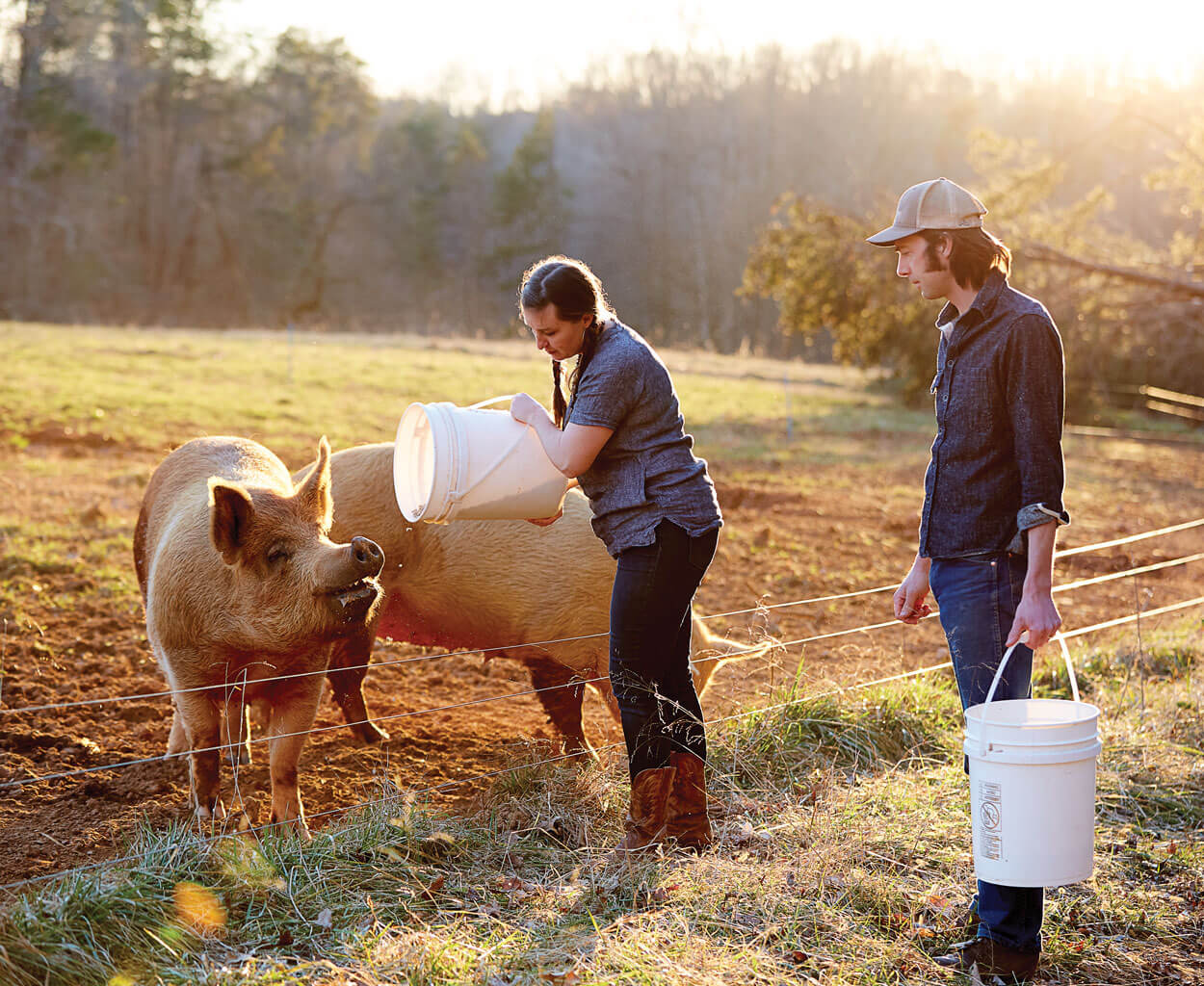 The Kimmels’ Tamworth sows weigh about a quarter-ton, but that doesn’t mean they aren’t on strict diets. Dinner every evening consists of a mix of GMO-free local and organic grains. photograph by Stacey Van Berkel

There’s an electric current that runs between Worth and Hillary — half a joke, the punch line unsaid because it doesn’t need to be, because each of them already knows it. Theirs is the sort of easy rhythm that one imagines would grow between two people wedded to one another, and to their work, and to their land. I ask about lines of demarcation — Worth says that they sometimes try to stop working by 5 or 6 in the evening, just go up to the hundred-year-old log farmhouse, make dinner, and be husband and wife. But it’s easy to see, too, that they might not really want or need those kinds of lines drawn all the time. Theirs is a life where their home is their work, where their partnership threads readily from their kitchen table to the pine market tables at the Downtown Curb Market in Greensboro and the Cobblestone Market in Winston-Salem.

We walk down from the pasture and into the forest, and we step into one of the wooded enclosures with this round of crossed piglets. There are maybe 20 pigs, and Hillary and Worth go back and forth about whether they weigh 150 pounds yet. “I don’t know,” Worth says, eyeing the piglets. “I don’t think that one weighs as much as I do yet.” They’ll weigh 250 to 300 pounds by the time they’re ready for processing.

The pigs run in knots of three and four as we walk among them. Eventually, they nose up to my legs. “Sometimes they can get curious, and a little mouthy,” Hillary warns me. “They explore the world that way. But they startle easily, so if you get nervous, just do something sudden” — she kicks one leg out, gently, and the pigs jump back — “and you’ll be fine.”

The piglets are, well, they’re cute. This can’t go unsaid.

The piglets are, well, they’re cute. This can’t go unsaid. They’re reddish-brown, and some of them have black spots, and they’re foraging through the duff layer of the forest, eating grubs and roots and acorns. And they’re playful. It’s difficult — this is the city boy in me, I know — to think of them as food. I don’t tell Hillary and Worth this, of course, just like I don’t tell them that in an alternate universe, a life where a few of my own choices might have gone another way, I could imagine myself living on a farm like this. I don’t want to fetishize farming any more than I want to pretend a pork chop isn’t a pig. But standing in these woods, you remember, or you realize, a few simple things: Farming is animals and vegetables. So, too, is food. To forget these connections is to forget how to be in contact with the world.

PTB Farm is named for Pine Trough Branch, a small stream that feeds into the headwaters of the Haw River. We’re walking back up the hill now. I ask Hillary and Worth what’s different about PTB (which they are rebranding to stand for “Pastured Tastes Better”). What’s most important to them about this place? “We’re stewarding this land and this water system, and we’re creating something delicious at the same time,” says Hillary, who also tells me that she’s got a sign at her market table that says, “Lard is the new kale.”

Hillary tells me that she’s got a sign at her market table that says, “Lard is the new kale.”

They grow vegetables, too, and greens and flowers, and they pasture sheep and cattle as well as hogs. They’ve started a couple of different community-supported agriculture programs where customers can simply buy credit at the market, and another, a meat box, where customers get different — sometimes unusual — cuts of beef and pork, and recipes to accompany them. “People get in a rut,” Hillary says. Plus, the more of the animal that people learn to eat, the more sustainable the entire cycle becomes.

The Kimmels sell special cuts of pastured pork to chefs in the Piedmont; they make sausage just for themselves and fry it on the woodstove on New Year’s Day. They raise 75 to 80 pigs a year. They can’t scale up much beyond that, because that’s about the number of pigs that the land will responsibly yield.

They’re making a go of it here in Rockingham County, trying to ride the rhythm of the seasons, always tinkering, planning, trying to see over the next rise. They’ve got a brand-new tractor that came in handy after Hurricane Michael took down dozens of trees. They might trade out the sheep for more space for cows. For right now, Worth says, it’s enough that they set their own schedule. For right now, it’s just whatever tomorrow morning’s chores might bring. It’s getting ready for market 50 Saturdays a year. “And it’s just being here,” Hillary adds. She leans close to Worth. “That,” she says, “and we get to eat some really amazing meals.”