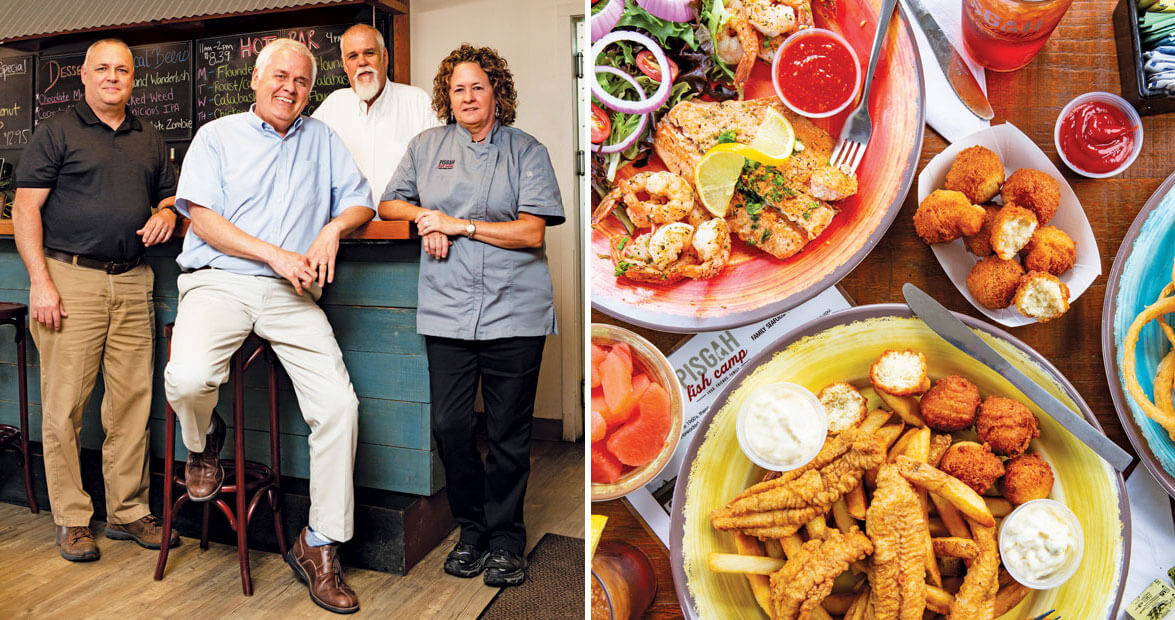 Pisgah Fish Camp, just a stone’s throw from Pisgah National Forest in Brevard, is a family business, founded by Dan and Fran Hawkins. To hear their four children — Dana, Mike, Jeanne, and Chris — tell it, the restaurant feels like a fifth sibling, the one they all took care of as they grew up together, always under the watchful eye of their parents, who are gone now but never lived more than 100 yards from the front door. The entire family worked in the restaurant, willing and able to step up to handle any job in the place. A curious customer once asked his server, “Who’s the bald-headed busboy?” It was Dan.

“Running a restaurant is a rite of passage growing up a Hawkins.”

The Hawkinses opened their first camp in 1968. Dan got the idea while traveling for work and eating at other camps along the way, admiring the easy-going friendliness of these hometown restaurants. But he noticed that there weren’t many west of Morganton. The original Pisgah Fish Camp was in an old cabin that was formerly the Brevard Country Club. Dan moved the business twice, each time to a better, busier, more convenient spot. The current location opened in 1992 in a former auto body shop at the busy intersection of NC Highway 280 and U.S. Highway 276. It was convenient to the Ecusta Paper Mill, too. North Carolina mill history is a reminder of the bond between hourly workers and local fish camps, places where entire families could go out to eat without taking too big a bite out of a Friday paycheck. Traditional mill-town life has nearly vanished in recent years, but Pisgah Fish Camp still lures people looking for a hearty plate for a little cash.

Over the years, there have been as many as six Pisgah Fish Camp outposts, and all four kids have managed at least one. “Running a restaurant,” Dana notes, “is a rite of passage growing up a Hawkins.” He chuckles about the time that he and his best buddy, Ricky Stephens, heard their high school principal’s voice over the loudspeaker, summoning them to the office. Their classmates figured they were in big trouble, but Dana and Ricky knew better: The lunch crowd was huge that day, so Dan had called to tell them to come to work — quick. 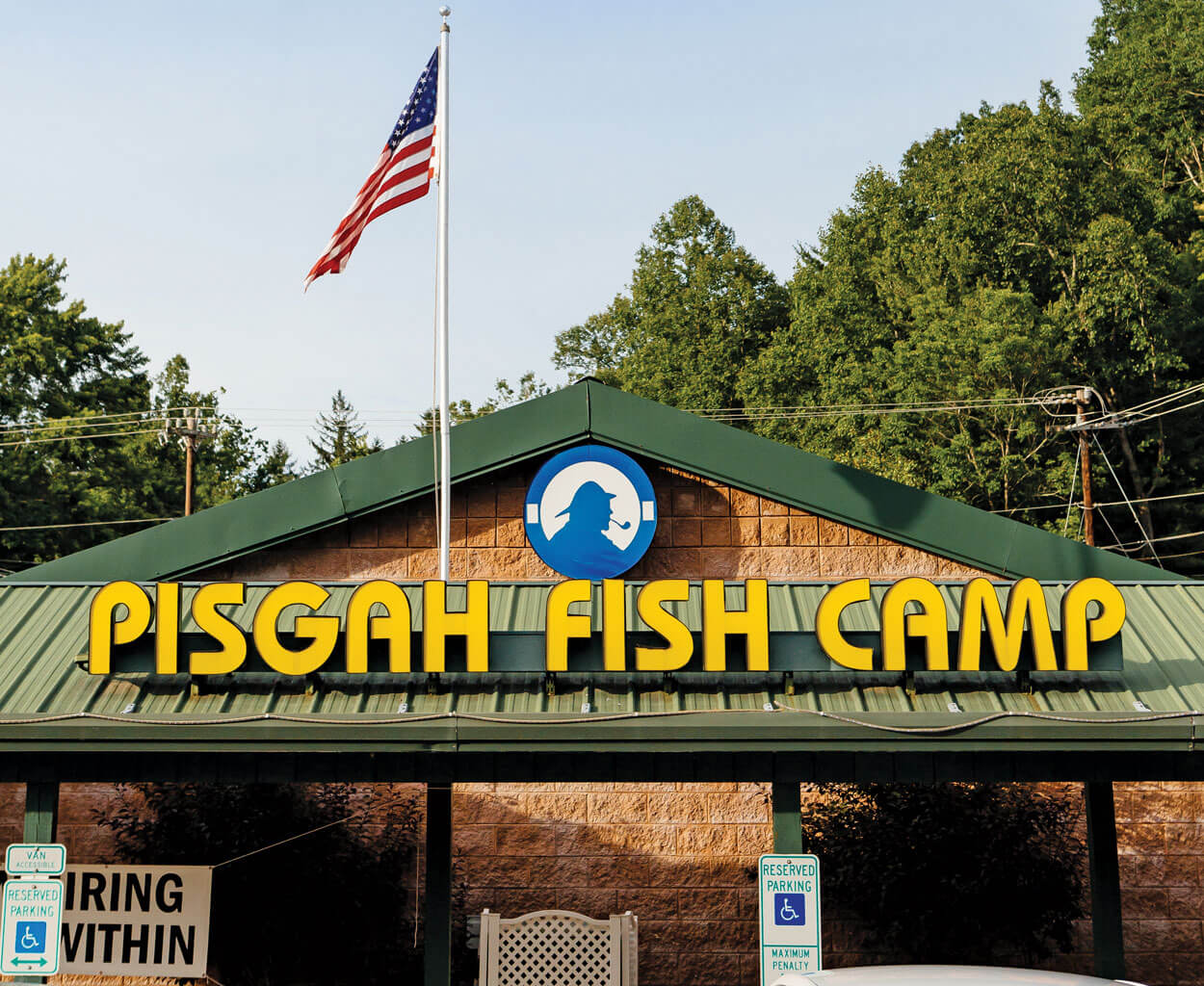 Not far from the entrance to Pisgah National Forest, the fish camp is a perfect post-hike dinner stop. photograph by Tim Robison

A few years back, the family chose to consolidate and focus on the Brevard spot, with Dana and Jeanne at the helm. If the doors are open, at least one of them is there, seven days a week. Mike is a county commissioner and bookkeeper for the restaurant, and Chris is the chief investigator for the county sheriff’s department, but few days pass when they don’t stop by.

They all talk, sometimes at the same time, about the bond they feel for each other and the family business. “To come and work in a job where I see my brothers is the best part,” Jeanne says. “We were raised to know the importance of keeping family together. Family beyond blood, too. Work family. Church family … ”

Dana quickly adds, “What I do for a living is see my brothers and sister every day. People know they’ll get good food and see 15 people they know. What you see in here is an extended family.”

Then Mike jumps in: “That’s the beauty of still being in this restaurant. We know we’re stacking something good on the community woodpile.”

Both Dan and Fran have passed away, but it feels as though they’re still the two most important employees, still keeping watch. Just inside the door sits a wooden ladder-back chair that holds a framed photo of a smiling Dan and Fran. Along one wall of the dining room is a mural of their original location, captioned with one of Dan’s many famous quotes: “They told me I was crazy. They said no one would drive that far out of Brevard to eat.” (It was three miles.) Over the cash register, where customers carry up their tickets to pay, hangs another portrait of the former location, this one a diptych painted by Dana’s mother-in-law. Along the left edge of the painting, one can see Dan, standing, as he often did, with his hands in his pockets, next to his old orange van that was as familiar around Brevard as he was.

Several times, they’ve hung up a huge trophy marlin for decoration, but those marlins are too tempting to kids from the nearby college who come seeking a souvenir. The Hawkinses used to track down and retrieve the purloined marlins, but as far as they know, the final one is still somewhere in South Carolina, too much trouble to extradite back to Transylvania County. Instead, a massive mural of a native trout now bedecks the back wall of the dining room. 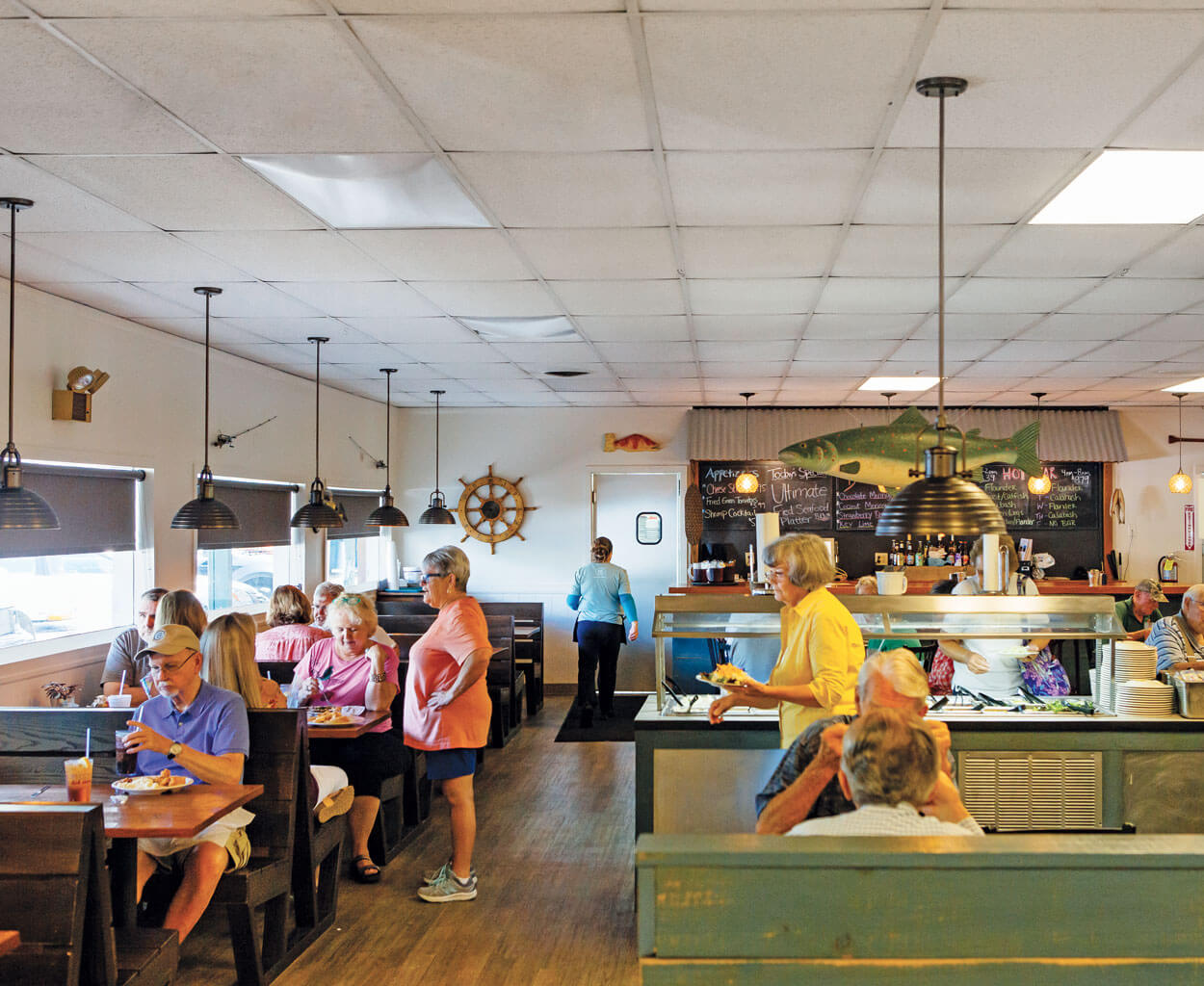 There’s plenty to look at and talk about inside Pisgah Fish Camp, but folks come to eat. The printed menus reflect the fish camp’s roots, focusing on fried fish — such as flounder, shrimp, and oysters — sidled up to coleslaw, hush puppies, and some form of potato. The food is unpretentious, plentiful, and plenty good. To keep up with the changing times and customers’ cravings, the family added lighter and more contemporary dishes, such as grilled salmon. There’s also fried chicken, hamburger steaks, and such for the landlubbers. These days, the restaurant is known as much for its brimming salad bar and hot buffet as it is for seafood, and customers set great store by the buffet’s daily specials. The regulars are just as likely to refer to the fifth day of the week as Meatloaf Day as they are to call it Thursday.

To this day, they hand-dip each hush puppy into the fryer.

Many of the original recipes came from Fran and her sister Dottie, the restaurant’s right hand, and also from the cooks who worked there for years and were like family to the Hawkins siblings. Dan was fond of saying, “It’s not important to be a good cook if you run a restaurant, but it’s very important to know one.” Nadine Thomas was the first to season the spiced apples with cinnamon candies. Elaine Ayers decided to tint the ranch dressing with green food coloring so that people could tell it apart from the blue cheese. The Russian dressing came from Jimmy Gaither, who’d been a Navy cook back in World War II and had operated a restaurant next to the Crest five-and-ten store where Dan once worked. When Dan remembered the “Chilean” dressing — called that not because it had anything to do with Chile but because it contained chili sauce — he asked Jimmy if he could have the recipe.

Their signature hush puppy mix and fish breader is Yelton’s Best from Lakeside Mills, just up the road in Spindale. “Our name is on each sack, and you can read the label,” Dana says. “But an ingredient list can’t describe the love and special touches.” To this day, the cooks hand-dip each hush puppy into the fryer. The Hawkins kids figure they’ve served three million customers, and, at three puppies a plate, that’s a whole lot of hush puppies — not counting the ones that Mike and Chris sneak each time they walk by.

Between the printed menu and the buffet, there are at least 100 different plate combinations for customers to choose from. Like Dan and Fran, this second generation of Hawkinses (and a few of their children who are now working in the family business) is always thinking about how to better serve their customers. They recall, with teary smiles, the time when Dan was in the hospital, staring pensively at the ceiling as he awaited surgery. Dana whispered, “Dad, what are you thinking about? You nervous? You OK?”

Dan replied, “Son, we need more corn on the cob on the buffet.”

For 51 years, the Hawkins crew has kept the business going strong, inspired by parents who worked hard but never failed to take Monday off. Dana, Mike, Jeanne, and Chris maintain that legacy, peppering both work and family time with stories and laughter. Mike gave the eulogy at Dan’s funeral in 1992, ending it with a reminder: “Dad would want us to mention that we’re closed today, but tomorrow is all-you-can-eat Fried Chicken Day.”