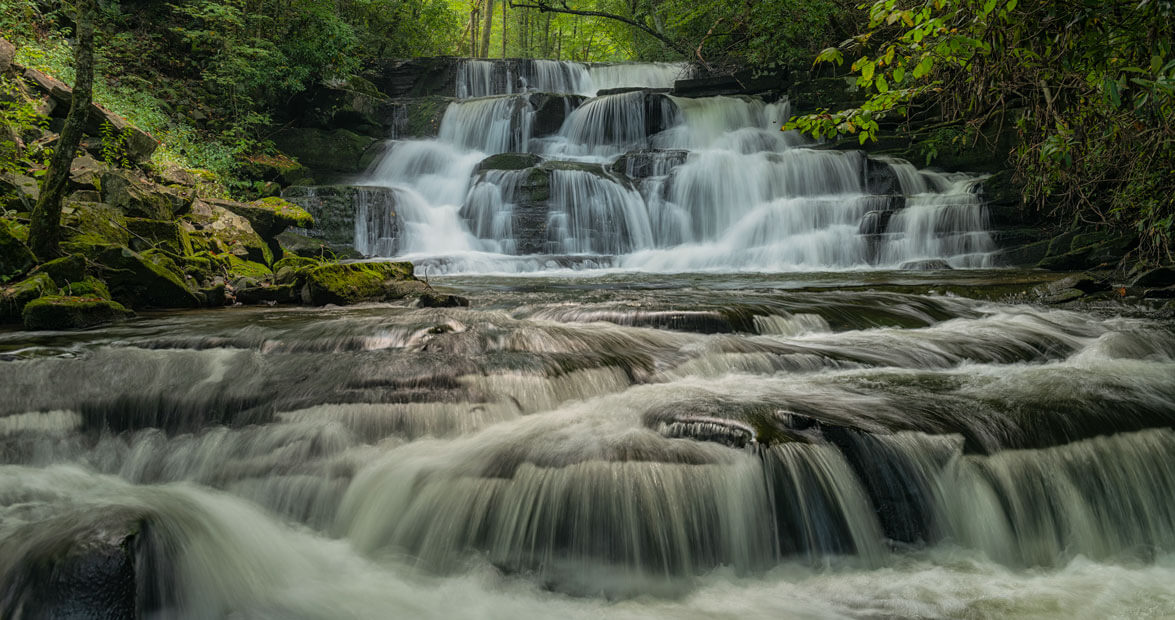 From his post at Three Eagle Outfitters, Kevin Kussow gets his fair share of questions about the top outdoor activities in Franklin. Since he and his sister opened the store back in 1994 with a mission to serve nature-seekers hoping to reconnect with the great outdoors, they’ve assisted countless families and solo explorers. In fact, about 6,000 to 7,000 Appalachian Trail thru-hikers stop in every spring.

But don’t ask him for a guided tour of the area — here, it’s just not necessary. “You can go wherever you want with a map, and you’re not going to get lost,” Kussow says. That’s just one reason why Franklin is a great destination for travelers with children in tow. Throw in kid-friendly whitewater rapids and Franklin’s standing as “gem capital of the world,” and you’ve struck family-vacation gold.

Get to know your mountain side exploring the mountains of Western North Carolina in the Land of the Noon Day Sun, Franklin and Nantahala. 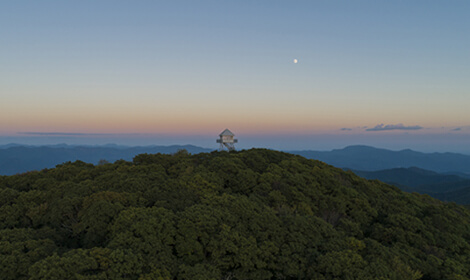 At the center of the 500,000-acre primeval Nantahala National Forest, the mountain town of Franklin is surrounded by sunlight-dappled gorges, sparkling streams giving way to majestic waterfalls, and more than 600 miles of hiking trails.

“My favorite is the Pickens Nose Trail,” Kussow says. “It’s an easy, 1.5-mile round-trip walk through rhododendron, mountain laurel, and wildflowers. Here, you can do a little bit of everything — rock climbing, rappelling, camping, and there are some great spots for a picnic.” 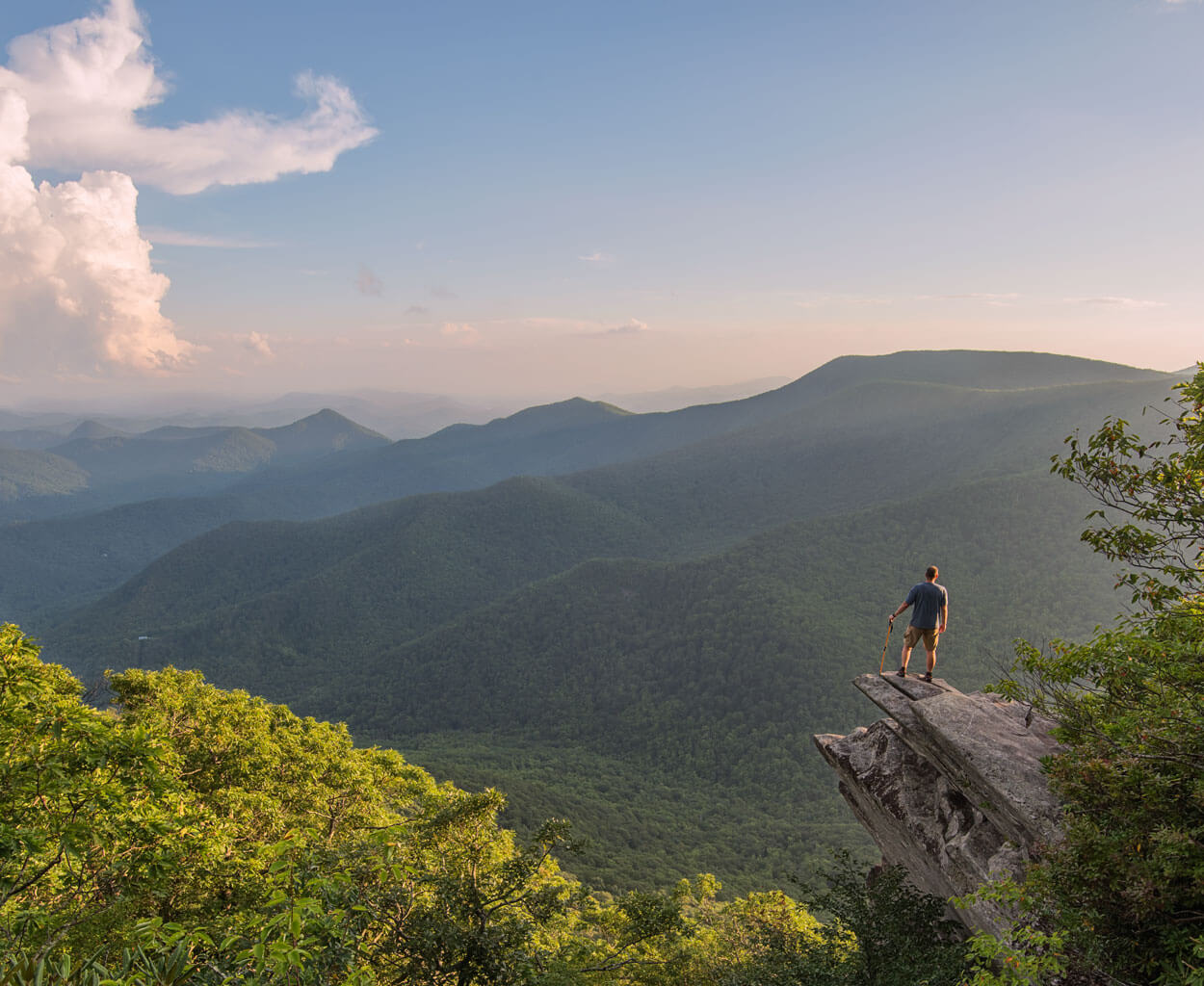 From rock climbing to enjoying a picnic, the Pickens Nose Trail offers a whole host of possibilities. photograph by Franklin & Nantahala TDC

For a four-mile round-trip hike that ends with a magnificent view, Kussow recommends hopping on the Bartram Trail at the end of Pressley Road. “Walk about 40 minutes up to a place called Williams Pulpit,” he says. The “Yellow Blazed” trail passes a waterfall and a 100-foot-long rock shelf before ending with westward-facing views of the Nantahala Mountains punctuated by Mill Creek Valley.

Arguably the world’s most famous hiking trail, the Appalachian Trail starts in Springer Mountain, Georgia, and runs 2,181 miles to Maine’s Baxter State Park. Along the way, Franklin is a certified Appalachian Trail Community, which means that it provides shuttles to and from the trail and supports the needs of AT hikers. Want to hop on and walk a stretch? The trail passes a few miles west of downtown, when it crosses U.S. Highway 64 West. You can park your car just past the big rock cut at Winding Stair Gap.

Whether you’re exploring on two feet or two wheels, the 13-foot-wide Little Tennessee River Greenway is wide enough to accommodate explorers of all ages and skill levels. If you’re adventuring with small kids, Kussow suggests accessing the north end of the trail, which winds along Suli Marsh and Big Bear Park — named for the fictional Cherokee bear Yanagwa — which features Wesley’s Playground and its splash pad. But his favorite is the south end. “It’s more natural and quieter, and the river is a little better,” he says. “You can also cross several big footbridges. I like to park at the Southwestern Community College library and walk down to the greenway access.”

In Franklin, rock hounds can choose from 10 active gem mines — regardless of their choice, they’ll probably get lucky. Tom Johnson and his wife, Ginger, own the Mason Mountain Mine, continuing a family mining legacy started by Tom’s father when he bought the mine in 1965. The mine, which is rich in rhodolite garnets and six other gems — including ruby, sapphire, kyanite, moonstone, smokey quartz, and cordierite — has attracted visitors since the late 1800s.

For a polished selection of stones and a history lesson on the area’s rich mining culture, swing by the Gem and Mineral Museum, housed in the former jail downtown. 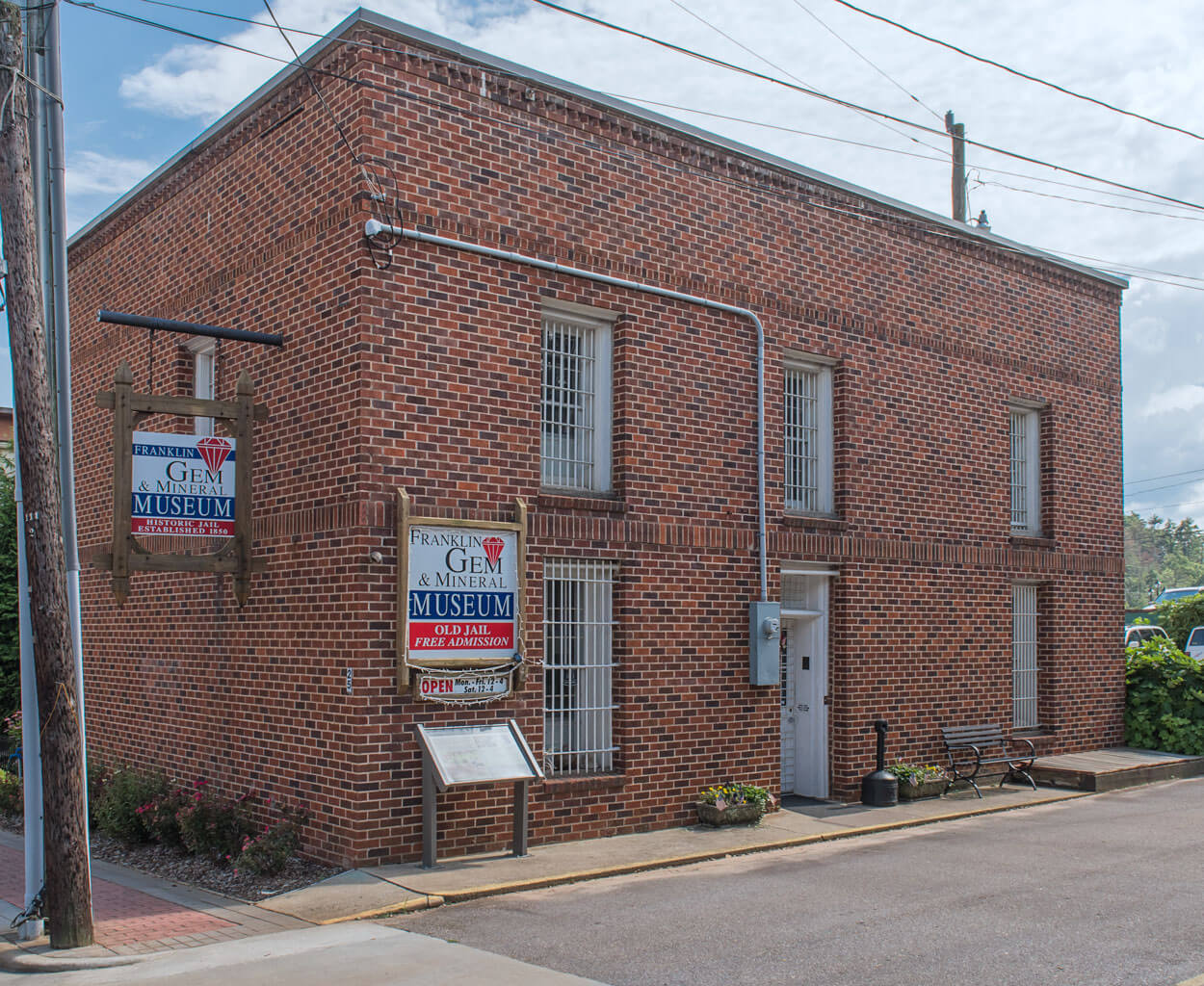 At the Gem and Mineral Museum, you’ll get a history lesson in the area’s rich mining culture. photograph by Franklin & Nantahala TDC

Set aside about three and a half hours to take on the Nantahala River’s eight miles of Class I and II rapids — and the optional three-foot-high waterfall Class III finale. “Plan to go in the afternoon; if the air temperature is cold, you’ll freeze to death in the morning,” Kussow advises.

While there are other white-water destinations in the Southeast, families love the scenic, crystal-clear Nantahala because, “well, it’s easy, and it’s fairly safe,” Kussow says. “The Nantahala has a release flow, so each day, they open up the dam and the water flows at a regulated rate. Then, at the end of the day when everybody’s done paddling, they close the dam.”

Jump in a Lake

With 29 miles of shoreline, the 1,600-acre Nantahala Lake lies just south of the Nantahala River and dates back to 1942, when it was built to provide electricity for the war efforts. “People who go to Nantahala Lake are looking for total peace and quiet,” Kussow says. “Over three-quarters of it is managed by the National Forest Service; there’s very little housing, and great fishing.”

In Nantahala Lake’s cool waters, anglers catch walleye, crappie, sunfish, trout, and bass. If a day on the water makes you hungry, Lakes End Café and Marina is open for breakfast, lunch, and dinner — and you can rent pontoon boats, canoes and kayaks, and jet skis. 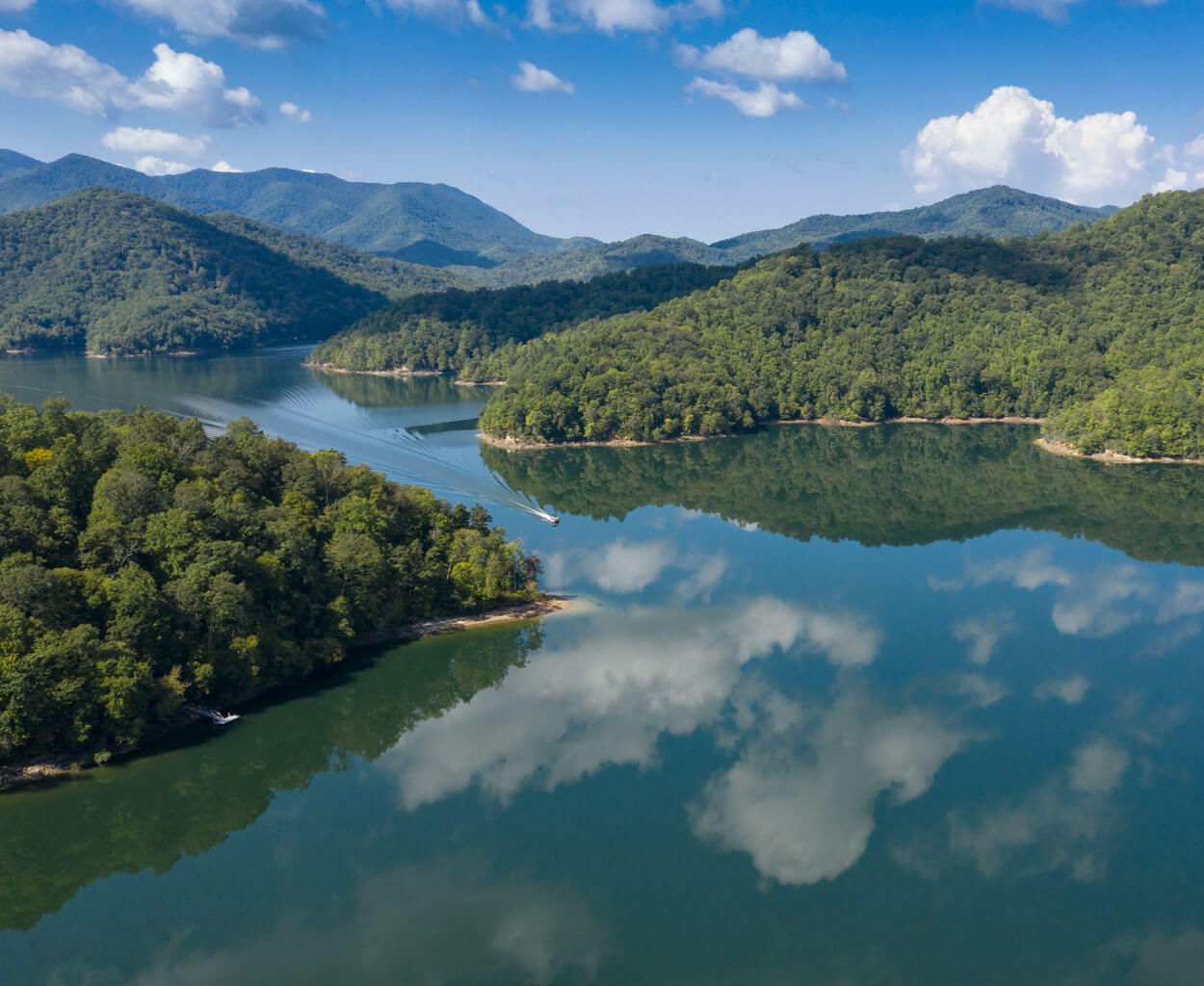 Nantahala Lake is a serene destination. Explore by boat or simply set up shop along its shoreline. photograph by Franklin & Nantahala TDC

The 30-minute drive from Franklin to Nantahala Lake is more than a means to an end. The Mountain Waters Scenic Byway passes within four miles of Wayah Bald — home of the 1937 historic stone fire tower that offers a panoramic view of the four surrounding states. It’s worth the detour.

When you see the Wayah Bald sign, turn right for a winding 35-minute drive to the mile-high overlook. Climb three stories to the top. Depending on the season, the lush landscape is speckled with rhododendron and mountain laurel or fiery leaves, not to mention hikers. Here, the Appalachian and Bartram trails intersect, making the structure a famous destination for tired travelers who’ve come to sleep under the stars.

Another scenic 360-degree view awaits at the Wesser Bald Lookout Tower. Unlike Wayah Bald, where you can arrive in a car and march straight up, getting to Wesser Bald involves a bit of a hike — and once you reach the tower, the steps up to the top are steep. Then relax and enjoy the view. Look north to see the Great Smoky Mountains; northeast for the Balsam Mountains and the Cowees; east for the Little Tennessee River Valley; south for the Nantahala Mountains; and west for the Valley River Mountains. It’s the perfect place to reflect on your adventure. 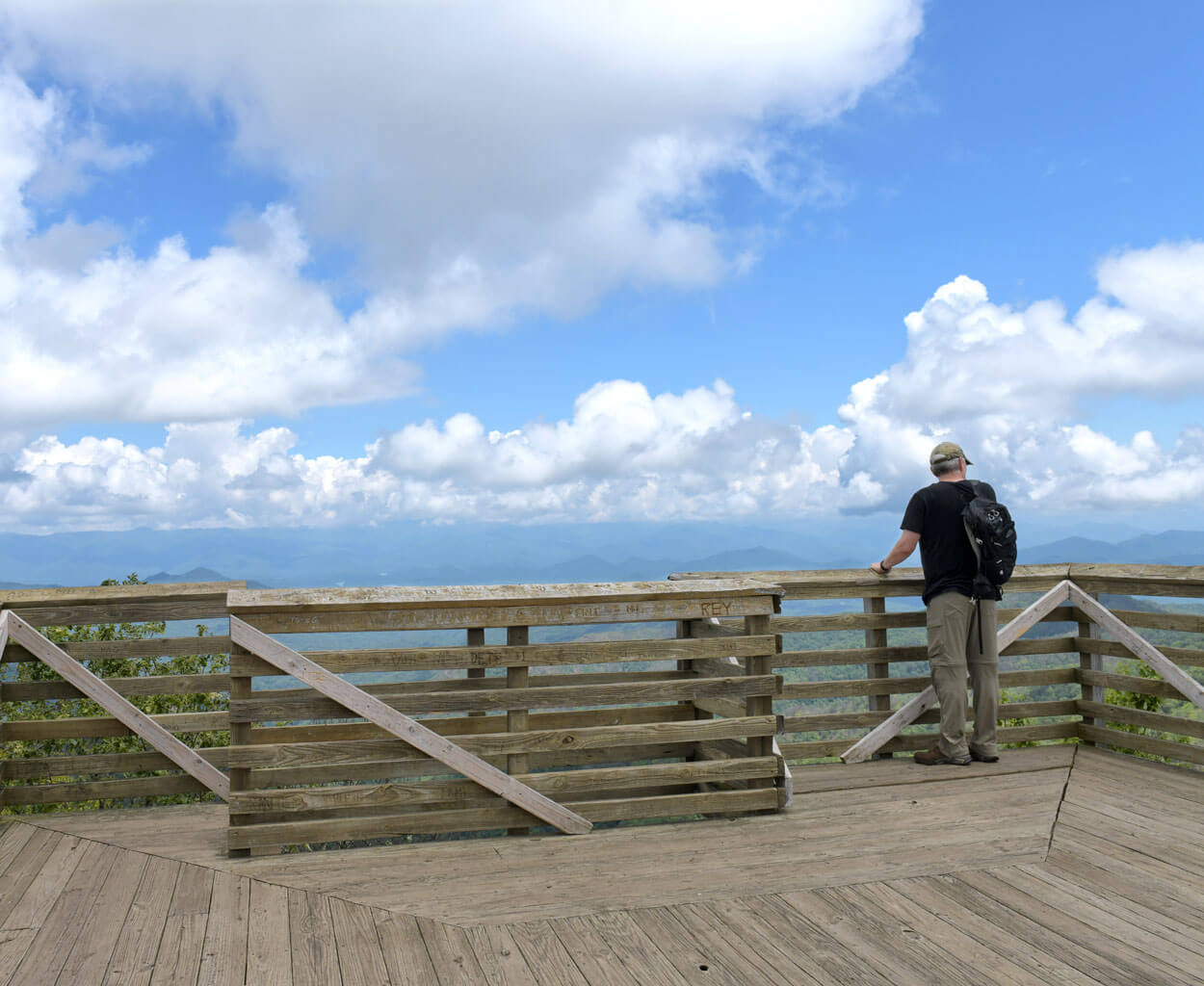 The journey to the top of Wesser Bald Tower is worth it for the stunning views. photograph by Franklin & Nantahala TDC

Looking for more things to do on your trip? Visit exploringwnc.com.