Matt Fitzpatrick wasn’t sure about the chicken salad. It wasn’t the taste. He’d long perfected the recipe, and his family loved it: a creamy spin on the classic approach, with dill and sour cream. But he had doubts about whether the wider world would embrace the departure. His wife, Mindy, had to talk him into it.

At the time, they were running a little stand selling tomato pies and other baked goods just off of U.S. Highway 70 as it enters Morehead City. Matt had been a successful local builder until the recession crippled his business in 2006. They were looking to the future, and the farm stand was a stop-gap measure until he and Mindy could figure out what came next. The large lot, shaded with soaring pines, had been in Mindy’s family for years. No one was using it. What did they have to lose?

As it turns out, not a thing. Because people liked that chicken salad. A lot. And they came to love just about everything else that the Fitzpatricks baked, roasted, smoked, and prepared.

Today, that little stand has grown into The Friendly Market, on Friendly Road in Morehead City, just as you drive into town from the west. Its big red barn aesthetic draws your eye. The wide porches beckon. You’d want to turn in to check it out even if you didn’t know that the business now has some 60 employees in the busy season, with a commercial kitchen that produces an astonishing array of prepared foods. There’s a solid wine selection and a carefully curated array of sauces, dips, and condiments from other small-batch vendors around North Carolina and throughout the South. From spring through fall, there’s a nursery filled with trees and shrubs, vegetable plants and racks of sprouted herbs and spices. 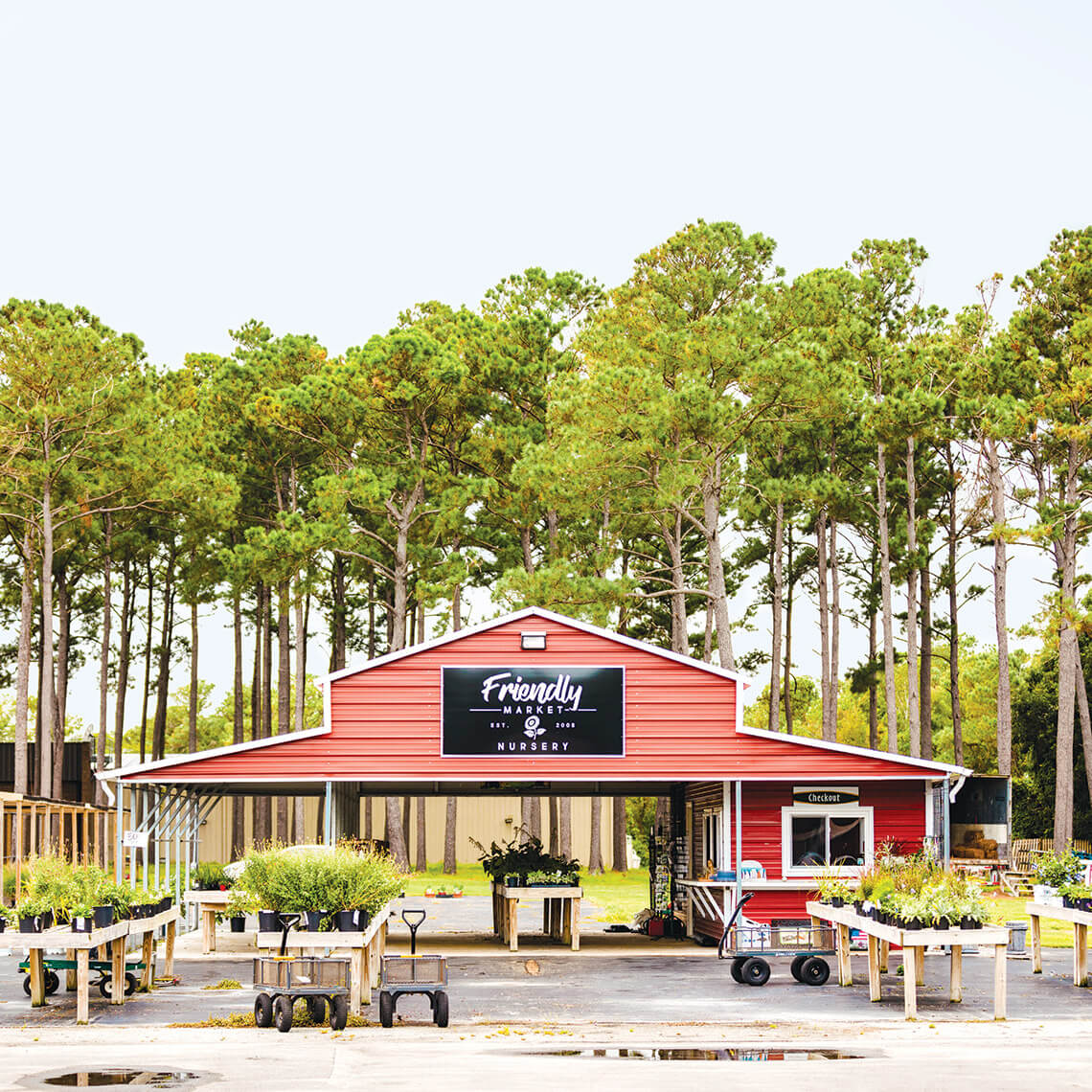 Between its nursery and its on-site kitchen, The Friendly Market has everything you need to plant a garden or plan a picnic. photograph by Baxter Miller

In a single stop, you can pick up blueberry French toast casserole for breakfast, roasted red pepper soup for lunch, blue collard dip for an appetizer, shrimp and grits for dinner, a jar of pickled okra to adorn a Bloody Mary, and a crape myrtle to shade your sidewalk.

And rest assured that you’ll likely walk out with chicken salad. It’s the No. 1 seller at Friendly’s. On a slow day, the kitchen will produce about 300 pounds. During the holidays, that figure more than doubles. “I was so-o-o-o wrong,” Matt laughs, standing in the Friendly Market kitchen, a hive of activity. “It’s a beast all by itself. To keep up with demand, it takes a couple of people nearly fulltime, living in a chicken-salad world back here.”

Chicken salad might be the heart of The Friendly Market, but its soul lives in five plastic storage totes tucked under a large food processor. That’s where the Fitzpatricks keep about 160 recipes on file and ready to reference at a moment’s notice. It’s an incredible storehouse of family recipes, local favorites, and customized takes on classic dishes. There’s tomato pie. (Which reminds me — I have a Friendly’s tomato pie in the freezer. I’m going to take that out for dinner tonight.) The Best Meatloaf on the Planet. (My capitalization, but trust me.) “Crack pie,” named by one of Friendly’s longtime customers and made with Butterfinger candy bars, Heath bars, butterscotch pieces, caramel chunks, chocolate chips, and pecans. (Note: Contains nuts, dairy, and freakin’ gobloads of deliciosity.) And there’s Betty Ballou’s cookies. Friendly’s bakes hundreds every day, straight from the recipe of Mindy’s mother, who was known for her cookies. “We buried her ashes in her cookie tin,” Mindy says. “That’s how much she loved to cook.” 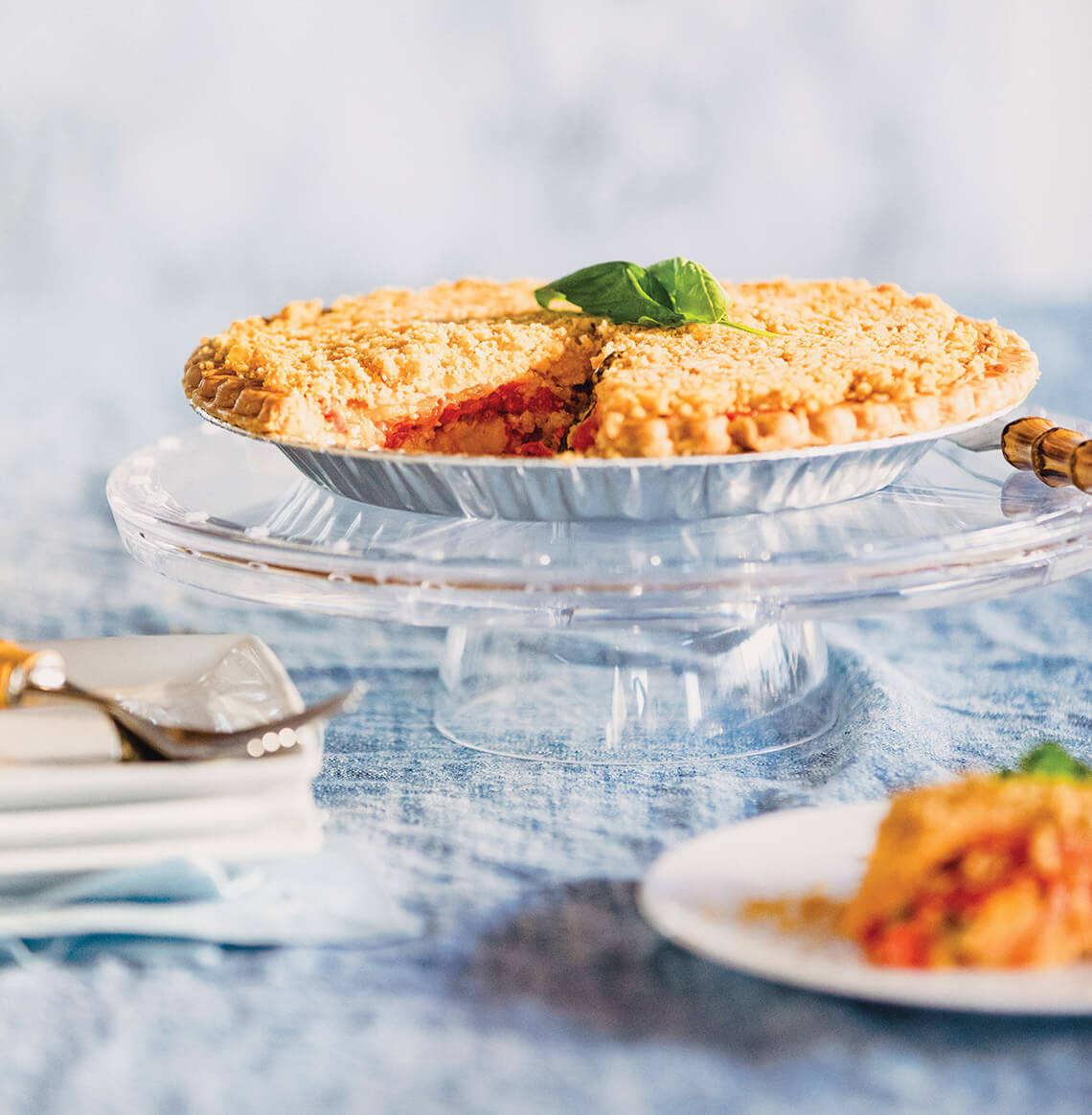 Mindy Fitzpatrick’s tomato pie — inspired by a version that her mother used to make — has been a signature menu item since the market opened in 2008. photograph by Baxter Miller

Those recipes reflect both the deep roots of the family in Carteret County and their deeply held belief that their success at The Friendly Market has been built on the firm foundation of community — of Morehead City, of Carteret County, and of eastern North Carolina. “We’ve grown with this community and because of this community,” Matt says. “It’s in our DNA to give back.” Mindy, in fact, grew up on Evans Street in Morehead City, and was a star basketball player at West Carteret High School (and then the University of South Carolina) as well as a champion surfer. Her grandfather was the namesake owner of the old Capt. Bill’s Waterfront Restaurant, a Morehead City institution. “People ask us all the time,” she says, “when are you going to grow your own produce? When are you going to sell seafood? And we tell them: Go to the local farm stands and the local seafood markets where folks are doing an amazing job. Support them. And support all the local vendors you can find on our shelves and in the nursery. We’re here to help build this community. We won’t stray from that.”

To understand what truly drives both the Fitzpatricks and the Friendly’s staff requires a step behind the curtain, so to speak. Behind the cash registers, in the wall that divides the store from the kitchen, three giant windows reach to the ceiling. I’ve stood in The Friendly Market an untold number of times, watching through those windows as a dozen cooks scurry about. “That window is a big deal,” Mindy says. “Customers can see what we’re all about. A song comes on in the kitchen and the staff starts dancing, and the customers get to dancing, too.”

But I never realized that the employees are watching, too. During my kitchen tour, I got an inside-out view. Standing in the kitchen, in an incredible whirlwind of chopping and mixing, basting and stirring, I realized that the cooks and staff of The Friendly Market have a window to the world, as well. A window to their customers.

I point this out to Maria Jauregui, one of the leaders of the Friendly Market team. She’s worked there for seven years, and she’s seen the business grow from little more than a corner hot dog stand to a pillar of both culinary arts and community engagement.

“I’ve been really thinking about this,” she nods, quietly following my gaze out the window to where customers browse and shop and line up to make their purchases. “When you stand here and look out, you realize that it’s not just food we are making,” she continues. “What we do here goes out to all these homes, to all these families. It is helping them celebrate, or even to grieve about hard times. To look out that window and know we’ve been a part of whatever makes them happy, or whatever helps them get through the sad times, well, it’s hard to explain how special that feels.”

Perhaps. But it’s not hard to feel what The Friendly Market is all about — no matter which side of the window you’re on.