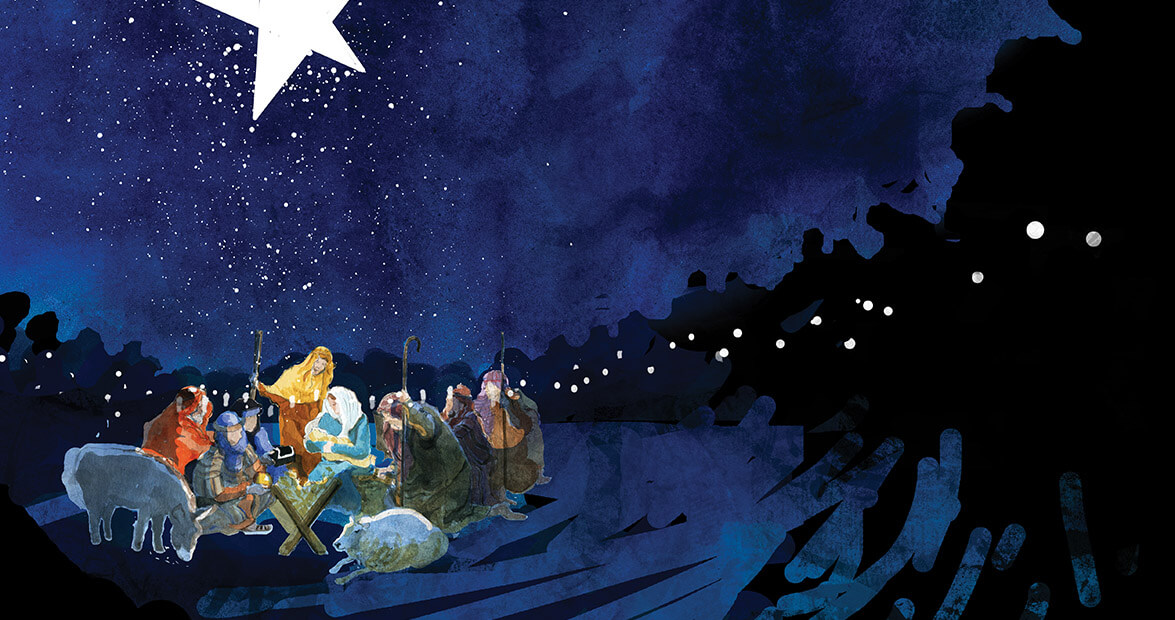 The true spirit of Christmas is the fear of missing out (FOMO) on the better Christmases of others.

Until recently, this was my unspoken holiday creed. I believed that my neighbors’ gifts were more neatly and colorfully wrapped than mine. Their turkey hit the golden mean between outer roast and inner moist. Their tree was ceiling-high, exquisitely isosceles, and ornamented by Martha Stewart herself. And their family cheer was as luminous as the conclusion of A Christmas Carol, whereas the pre-redeemed Ebenezer might as well have been my host.

How did I reach this grim vision of Noel as FOMO in overdrive? One reason is that I grew up only 15 miles from, and in the same county as, one of the most vibrant Christmas towns in America: Bethlehem, North Carolina, population 4,214.  Beside the holiday fervor of this small community, my Taylorsville Yules burned low.

Since the late ’70s, Bethlehem, located on the Catawba River just north of Hickory, has greeted the Christmas season with the lighting of the Bethlehem Star, composed of illuminated wrought iron, and measuring some four feet from corner to corner. The star stands on a 50-foot pole on the lawn of Pisgah Lutheran Church. (In my childhood days, it rested in a grassy lot near Bethlehem Realty.) The first week of December, about 3,000 people attend the lighting ceremony, arranged by the Bethlehem Community Development Association. Bonfires, caroling, hot chocolate, hot apple cider, Bible reading, Santa Claus, and a living manger scene enhance the evening’s conviviality.

Another famous Bethlehem tradition involves the town’s post office, opened in the mid-’70s. Every Christmas, folks of good cheer from all parts of the world send or take their gift parcels and holiday cards to this tiny brick building. They want their good tidings to be postmarked “Bethlehem.” To stand in line with others while watching far-flung benevolence overflow the sorting area: This is a bright, meaningful ritual.

Why did I never participate in either of these Rockwell-worthy Christmas spectacles? My family and I were certainly aware of them. The local paper, The Taylorsville Times, frequently reported on the Bethlehem holiday scene, and certain members of our church — Taylorsville First Baptist — had actually witnessed the star and the postmark.

My mom was, in fact, keen on the lighting. At the beginning of almost every December, she would say that this year we’d watch the lighting of the star. But when the special night arrived, always on the first Saturday of the month, the heavy TV football schedule would have already rendered my dad immobile on the couch. In Bethlehem: hot chocolate and bonfires. In Taylorsville: Zenith-induced lobotomies.

Or maybe the lighting would conflict with the Taylorsville Christmas parade. Aside from a too-skinny Santa bringing up the rear with fake cotton snow sagging off his float, the pageant featured old, farmer-looking guys driving huge red tractors for no other reason than that they owned huge red tractors; shrill cheerleaders from the Pop Warner league; and a horde of sullen middle school marching bands. Meanwhile, in Bethlehem, rumor had it that St. Nick emerged from the darkness into the firelight in a sleigh pulled by real reindeer!

On another year, Yuletide dramatics might have held me back. Take ’79, when I landed the role of Simon the Chipmunk in my school’s Christmas variety show. I was in the seventh grade. Simon was the brainy, bespectacled member of the rodent boy band, foil to Theodore, the chunky naïf, and Alvin, cute and mischievous. I had been desperate to play Alvin, but the only criterion for the role was simply this: being the smallest boy in the class.

Timmy, however, was as twee as he was wee.  Near the end of our number — “The Chipmunk Song (Christmas Don’t Be Late),” which we lip-synched while wearing backward-turned baseball caps, and swaying in unison — Alvin wistfully sang his Christmas wish: He still wants a Hula-Hoop. That stole the show. I hated Timmy.

Backstage after the performance, I was imagining those in Bethlehem closing out their star ceremony by singing “Silent Night” in the fire’s flickering light. Then I heard someone crying. It was Timmy. Through his sobs, he was telling his mom that he was terrible.

I thought, How can he be unhappy? He had exactly what I wanted.

But Timmy obviously desired something he didn’t possess, against which he was miserably gauging his performance. Who had what Timmy wanted?  And that guy, who had what he pined for?

When Timmy’s weeping interrupted my reverie of tranquil Bethlehem, I vaguely glimpsed the idea that has largely controlled my life: No matter where you are, there’s somewhere you’d rather be. There’s always an Alvin more hammy, and even the Bethlehemites imagine Edens across the water.

This longing for inaccessible perfection, I later concluded, needn’t be merely melancholy. The yearning can also be pleasing, because it can produce perpetual contemplation of the desired ideal. In German, this blissful ache is Sehnsucht, which C.S. Lewis translates as Joy: “an unsatisfied desire which is itself more desirable than any other satisfaction.” For Lewis, this constant ache for ungraspable happiness is the “desire … [that] pierces us like a rapier at the smell of bonfire” or “the noise of falling waves.”

When I was growing up, Bethlehem at Christmas was my ideal. That I have still not visited this town during the holidays — even though I live only an hour’s drive away — is testament to this. I’ve been afraid to behold the star’s one burned-out bulb or smell the postmark’s actual ink. My utopian image might be shattered.

This is silly, especially since Bethlehem is now even more glorious at Christmas. Since 2001, the churches of the community have combined to create “Bethlehem in Christmas,” a drive-through dramatic rendering of biblical Bethlehem. During the second week of December, visitors can leisurely motor past 30-plus scenes arranged on a property adjacent to the Fellowship Advent Christian Church. Nearly 100 local actors play shepherds, soldiers, kings, peasants, prophets, and angels, all in service of the primary scene: Mary, Joseph, and the babe. Horse-drawn chariots add to the realism.  More than 2,000 carloads from around the state annually enjoy this theater, which has attracted attention from The New York Times and the former USA Weekend. Those desiring a more intimate experience can stroll through the recreated village in costumes provided by the organizers, and actually interact with the characters.

I’ve realized that it’s time for me to grow up, to quit the “Bethlehem withins,” those imagined “betters” that leave me dissatisfied with that which is nearest. I don’t want to see my Christmases, or anything else, only for what they are not. I don’t want to measure my daughter by some notion of perfection, to miss her messiness, her blemishes — which are what make her her, and no one else, and lovely.  And I certainly don’t want her to use her fantasies, no matter how vibrant, to devalue the facts front and center.

My hope is that she’ll remember her family Christmases for what they are: wonderful and weird and ecstatic, but also filled with stress, indigestion, boring relatives, toys a cursing father can’t assemble, and the fire log’s smell of petroleum wax.

The magic of Christmas is inseparable from its muddles. Both are a part of our family Christmas, the only Christmas we have, which we have chosen to love.

Thousands of visitors will travel to Bethlehem this Christmas, and there they’ll experience the joy of everyday folk creatively celebrating their community. I might join in the fellowship this year, take my family, and finally see this town for what it is.

But my visit will be a detour from where I’m actually going, which is to Hickory, on the other side of the river. That’s where my dad lives, and I want to sit with him and watch football for hours and remember our lives in Taylorsville. I wouldn’t have it any other way.