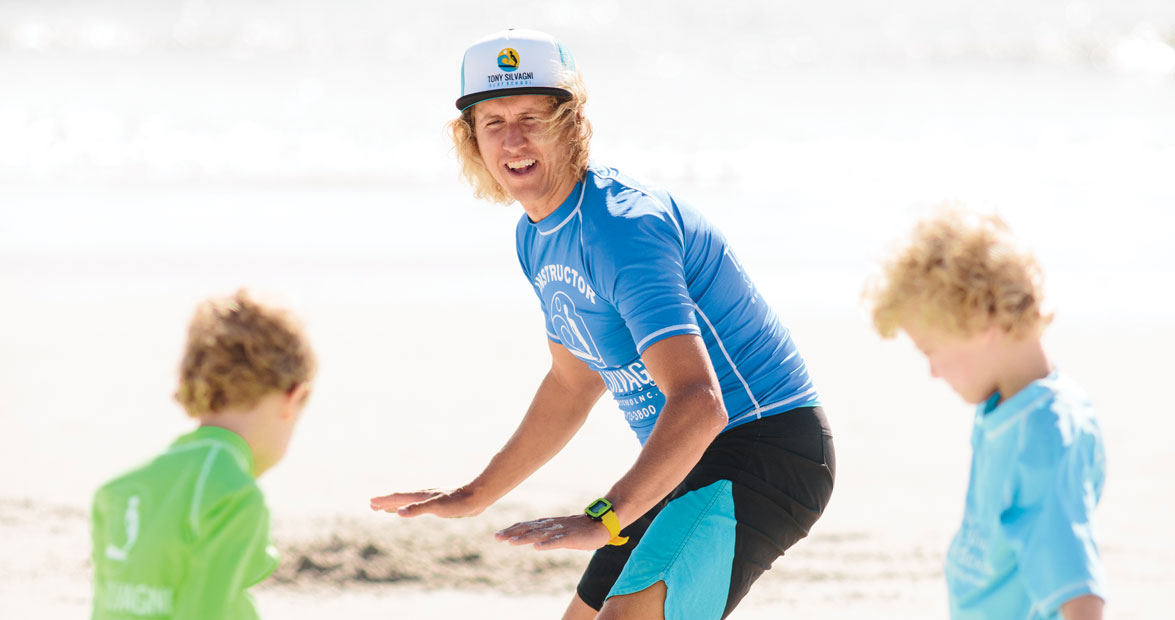 To talk to Tony Silvagni on the phone, to research his career as a surfer and the owner and operator of the Tony Silvagni Surf School, to sift through pictures of him carving across the faces of waves on the gorgeous Bill Stewart longboards he rides exclusively — well, all of this is to get your hopes up. He can’t quite be real, right? Could the guy who just won a bronze medal at the ISA Longboard World Championships in China also be amiable, personable, wide-open, and kind? Turns out, the answer is yes: When you meet Silvagni in person, he’s a little bit more, well, everything than you’d dared to hope. He’s a fever dream of who a professional surfer might be.

Silvagni is 31 and has been surfing the break between Carolina Beach and Kure Beach since he was 5 years old. He sports an island-wide smile, bright blue eyes, and the sort of infectious, honest enthusiasm that lets you know he’s a born teacher as well as an athlete. He’s tanned in a way that makes you want to quit your job. He doesn’t go more than a sentence or two without talking about surfing, or teaching surfing. Oh, and he’s got this massive head of curly hair.

My older son has curly hair, also massive. My older son has been begging for straight hair, because straight hair is apparently cool. “Have you seen your hair?” we ask him. “Dude. It’s cool, we promise.” But now — I’ve got my sons with me, because they are going to get an on-land lesson from a real live surfer — I don’t really need to prove anything to him anymore. Tony Silvagni, professional surfer, has my older son’s exact hair. I whisper this to him.

“I know,” he whispers back, eyes wide, hanging on every, every word coming out of Silvagni’s mouth.

Silvagni thinks Carolina Beach is an ideal place to learn to surf. “The waves are usually small, glassy, and playful,” he says. “Very accommodating.” He tells me this is one of the best sandbars on the island. Silvagni tells me, also, that anytime they’re running lessons or camps, he employs as many as seven other instructors at a time. He smiles. “After all,” he says, “you’ve only got two hands.” And if a student is intimidated, he adds, an instructor will tandem surf with him. Silvagni just wants people to love surfing like he does. 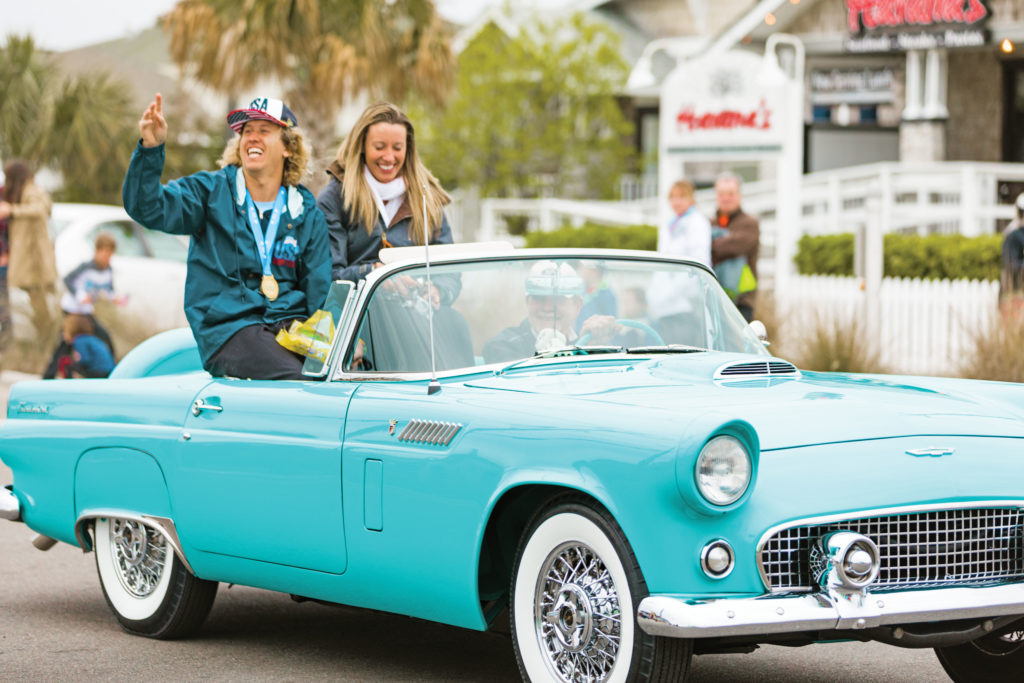 Those ISA World Longboarding Championships, by the way? Think of them as the Olympics of surfing. Think about this, too: Silvagni has qualified for 10 consecutive world surfing tours. He’s the ninth-ranked pro longboarder in the world. He was the 2016 USA National Pro Longboard champion. He’ll talk about his accomplishments if you ask him directly — and you can tell he’s proud, and he should be — but mainly what he wants to talk about is being in the water, and helping other people get in the water. It’s not so much that he’s humble, though he is — it’s that he’s authentic. This world-famous surfer really is as excited about teaching folks to surf as he is about finding his own ride.

The first thing Silvagni teaches my kids is what “hang loose” means. “It means surf’s up, waves are good, relax and enjoy your time,” he tells them. “Cool,” my older son says, the very picture of cool.

During surf camp, kids are in the water two hours a day, five days a week. Mornings begin with stretching, paddling practice, and learning about water safety and the proper stance on the board. “We have to figure out if you’re regular-footed or goofy-footed,” Silvagni says. My kids ask for clarification: regular is left foot forward; goofy is right. “Either way is cool,” Silvagni tells them. “Cool,” my younger, goofier-footed son says.

I step back out of the way while Silvagni teaches them on land how to paddle by cupping their hands and digging in the sand. I can’t really hear what he’s telling them, but it doesn’t much matter: They’re listening, and Silvagni is so obviously in his element that it feels like anything I’d do would just be getting in the way. Was this what my dad had to figure out how to do for me? How many times did he let me fall out there, all those summers, while I was learning how to surf from kids who lived at the beach?

Later, after Silvagni’s taught them that the leash goes on your ankle, and not your wrist, he tells me that he’s taught kids as young as 3½, and adults as old as 80. “The first time they stand up,” Silvagni says, squinting out at the waves, “it’s exhilarating to see just how stoked they are to be doing it.” He shakes his head. “It’s awesome.”

Back home, my kids wear their Tony Silvagni Surf School rashguards for three straight days. My older son can’t stop talking about how surfing is a job, that surfing is Silvagni’s job. I tell him that not just anybody can become a surfer — but he tells me Tony Silvagni told him the opposite. “Anybody can surf,” my son says one night at the kitchen table. “Mr. Tony said so.” And again I remember surfing when I was a kid, the smell of the board wax, the feeling of being up on the board and riding right out at the front edge of a wave, that feeling of absolute freedom — and I tell them yes, all right, you two can be surfers when you grow up. “Sweet!” my younger son says. “Cool,” says my older son, one hand up in those curls he’s not asking me to straighten anymore.