Back in 2017, not long after she quit her job as a news anchor and only days after her mother died of ovarian cancer, Beth Troutman drove to an office park on the west side of Charlotte to spend some time with a 14-ton stainless-steel sculpture of a human head. The piece, called Metalmorphosis, is constructed in layers that spin around, separating and then coalescing. Its gleaming presence affected Troutman more than she imagined possible.

“At moments, it looked like the head’s eyes and mouth were empty,” says Troutman, now the cohost of the lifestyle program Charlotte Today on WCNC. “I was thinking about excess and how we all become shape-shifters, like empty robots of steel. I found the piece disturbing — it made me feel fragmented mentally.”

That night, Troutman wrote about it in her journal, copying a line from a Frank O’Hara poem called “Meditations in an Emergency” that seemed apposite: “My eyes are vague blue, like the sky, and change all the time; they are indiscriminate but fleeting, entirely specific and disloyal, so that no one trusts me.”

Ten miles away from Metalmorphosis, a sculpted bird perches on an arch, the entire piece covered with a mosaic of more than 7,000 mirrors. Some weekends, The Firebird sculpture seems like the center of Charlotte’s uptown business district, surrounded by visitors to the Bechtler Museum of Modern Art, theatergoers posing for selfies, and even skateboarders, who whiz around it and use it as a launchpad that captures their aerial tricks in thousands of tiny mirrors. 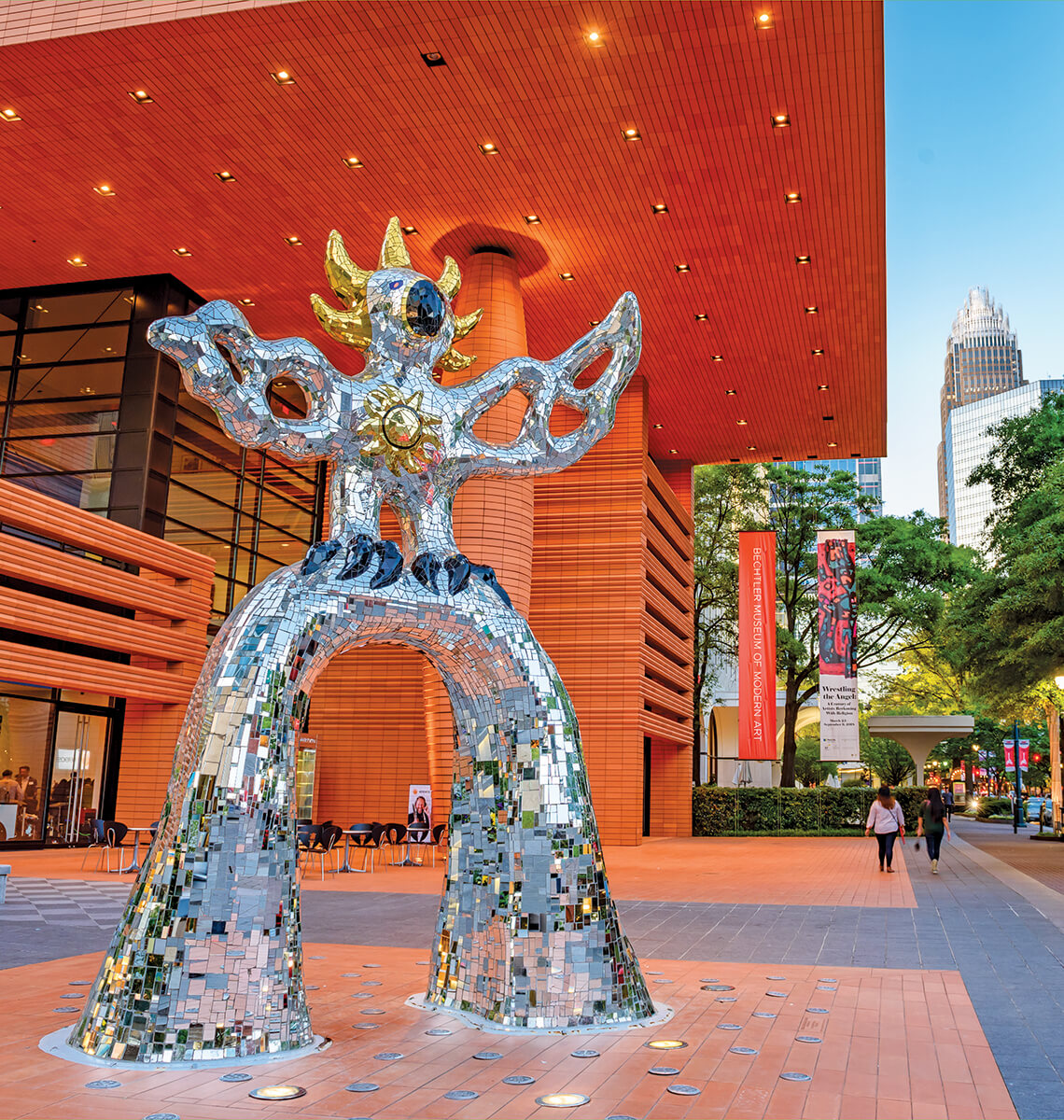 The 17-foot-tall Grand Oiseau de Feu sur l’Arche (or The Firebird), in Uptown Charlotte, is known colloquially as “the Disco Chicken.” Modern music fans swear that it looks just like the cover of a popular Flaming Lips album. photograph by VisitNC.com

Artist Niki de Saint Phalle didn’t create her Firebird sculpture as a skateboard ramp, just as sculptor David Černý didn’t design Metalmorphosis as a public locus of grief and catharsis. But public art belongs to the public — people find unanticipated uses for it. One use that Charlotte has found for its twin works of reflective art: The pieces have become popular symbols of the city itself. In a town filled with transplants and recent arrivals, the sculptures remind residents that they are part of a larger community, that a metropolis with glass-and-steel bank buildings is also full of art and homes and humanity.

Both sculptures were brought to the city by patrician European businessmen: Count Riprand of Arco-Zinneberg commissioned Metalmorphosis for a real-estate development — the Whitehall Corporate Center — in 2007. Andreas Bechtler spotted The Firebird at the Atlanta Botanical Gardens, bought it, and, in 2009, placed it outside the museum that bears his name. Both works were made by artists previously known for their provocations. The Czech artist Černý, whom The New York Times once called the “bad boy of the eastern European art world,” started his career by painting a Soviet tank pink. The French American Saint Phalle used to assemble sculptural paintings with balloons filled with paint and the detritus of her domestic life; she would then bring guns into art galleries and shoot her own works.

“People have worked this artwork into the celebratory moments of their lives.”

“Her granddaughter called her a sacred monster,” says Dr. Jen Sudul Edwards, the chief curator at The Mint Museum in Charlotte. “Saint Phalle spent the first half of her life as an artist exorcising demons and the second half keeping them out, creating this sacred, inspirational space in her art.” (Sudul Edwards, formerly responsible for The Firebird as the curator at the Bechtler Museum, is a specialist in Saint Phalle’s art; in an unusually long-term plan to cultivate journalistic sources, I had the foresight to marry her two decades ago.)

The Firebird’s official name is Le Grand Oiseau de Feu sur l’Arche, which translates as “The Large Bird of Fire on an Arch,” but some Charlotteans use a more casual nickname: “the Disco Chicken.” Sudul Edwards has seen countless groups take photographs with The Firebird — Segway tours, newly engaged couples, families celebrating a daughter’s quinceañera. “These elaborate hooped skirts refracted repeatedly in the mosaic make for an otherworldly image,” she says. “People have worked this artwork into the celebratory moments of their lives — it’s become an essential part of the fabric of Charlotte.” 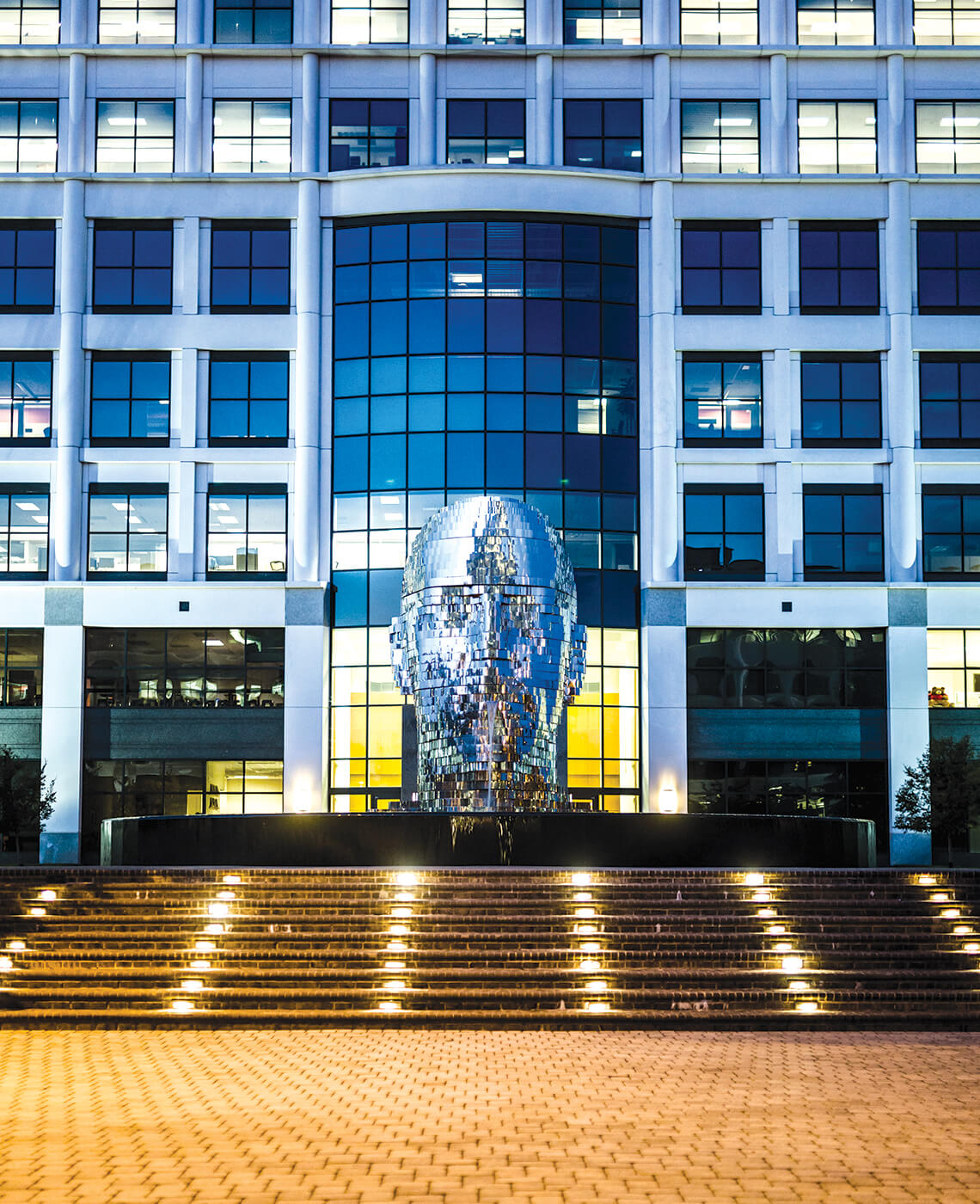 Named one of the “seven wonders of Charlotte” by The Charlotte Observer, the 22-foot-tall rotating Metalmorphosis head brings a sense of digital-age intrigue to a corporate park on the outskirts of town. photograph by Charlottesgotalot.com

Shannon White, the collections and exhibition manager at the Bechtler Museum, oversees The Firebird’s maintenance — that means quarterly repairs, usually requiring the replacement of 30 to 60 cracked tiles. “The colored tiles on the bird itself are specially made in France,” White says, “but the tiles on the arch are basic bathroom mirror tiles.” The museum wrapped the sculpture to protect it against the elements just once, in 2018, when Hurricane Florence was about to hammer Charlotte. The public consensus was that the bird had acquired a coat.

Since Metalmorphosis was installed, it’s been removed for repairs periodically. When it’s in perfect working order, it has mechanisms that allow the head to spin around and spit water into a fountain. During the winter of 2019, the fountain overflowed and froze, resulting in a cascade of ice.

Ona recent Monday afternoon, the head of Metalmorphosis is static, gazing steadily at an office building, looking at once solemn and whimsical.

“They take it down for way too long, sometimes five or six months,” complains Laura Freeman, who works at an engineering firm down the street; she’s buying lunch today from a vendor on the Metalmorphosis plaza. “People come from all over to see our dismembered metal head,” she brags. Freeman has witnessed folks making quick pilgrimages during a layover at Charlotte Douglas International Airport, and she once met someone who had driven all the way from Texas to visit the head. In recent years, Metalmorphosis has been designated a “gym” in the digital game Pokémon GO, meaning that players battle online with virtual creatures to control it. Freeman pulls out her phone to show the sculpture’s secret life in the game. “A yellow team is in the gym now,” she says.

At sunset, Freeman confides, the head briefly acquires a beautiful pinkish glow — and if you position yourself just right, you can take a picture where forced perspective makes it look like you and Metalmorphosis are kissing. When a city loves a piece of art, somehow the art loves the city, too.