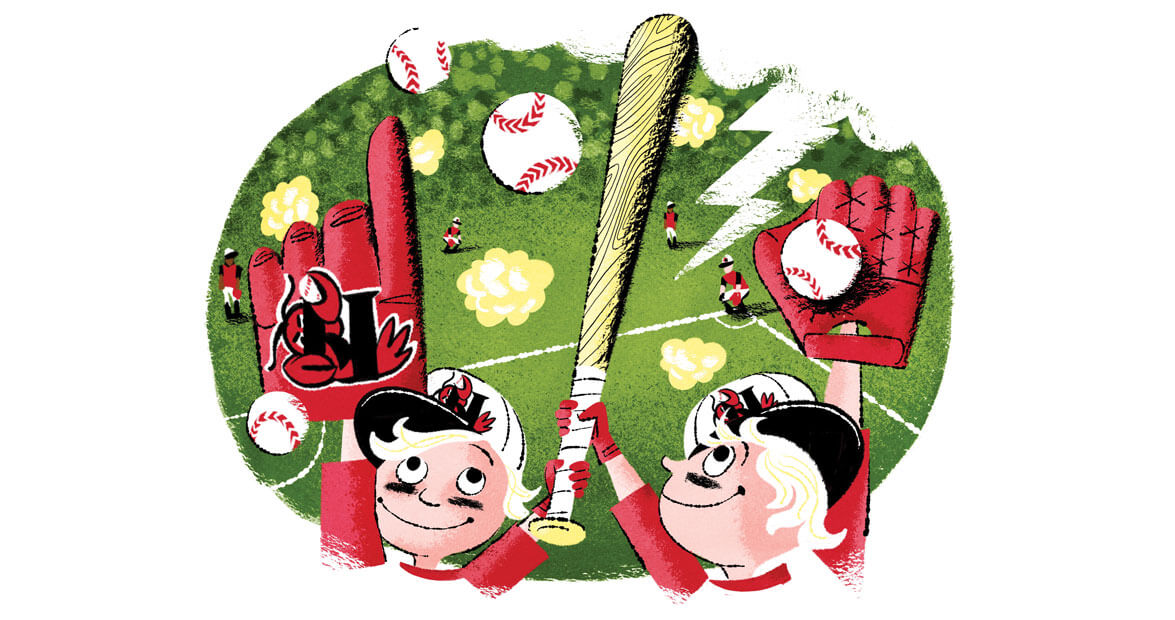 It’s strangely still at the ballpark, given that there are pop-up thunderstorms everywhere but here. We’re on a pregame tour of L.P. Frans Stadium, home of the Hickory Crawdads. The Toad and The Wee, fresh off their first Little League season, have reached the age where going to the ball game is as much about the game as the snow cones and popcorn, and they’re suddenly keen to see any baseball, anywhere. I am always keen to see any baseball, anywhere. I’ve been to games in Burlington, Winston, Danville, Durham. But never Hickory.

I called Charles Young, part-owner of the Crawdads. Would it be possible, I said, to bring my notebook and camera and these two new fans, maybe look around a little? Right away, he was laughing his huge round laugh, offering far more than I’d asked. I just wanted to see the game up close. Young, however, heard “kids,” and sprang into action.

You should have seen the looks in my boys’ eyes. The bats were as big as they were. They glowered, in Crawdads eye black, of course, into the setting sun. They almost managed to hold those bats over their shoulders.

Young played catcher and outfield for Wake Forest in 1962 and ’63, when the Demon Deacons were back-to-back ACC champions. Now he’s just a “retired country lawyer,” he says, part of a team that brought baseball to Hickory in 1993. He’s telling me this as he walks us through the clubhouse, which is loud, loud, loud. Players are dancing and praying and warding off slumps and pulling on lucky stirrups. We meet Sam Huff, a 2016 draftee who stands at least eight feet tall and looks like a baseball card. He leans way down, gives my kids his batting gloves. This is how we get the batting gloves. This is maybe 5 o’clock in the afternoon. The game hasn’t started. It’s not raining yet. There’s no clock in baseball.

In my notes, it says, in all caps: I GOT CHILLS IN THE DUGOUT. The team — giants, every one of them — starts filing in. The storms are moving away, and it looks like we’re going to play ball. Some kind of pregame ritual commences: the players, many of them native Spanish speakers, are passing around fiery gumballs, making jokes. I tell The Toad, who attends a Spanish-immersion elementary school, to tell the players he can understand them. He does this. In Spanish. ¡Visto los niños! the players holler, elbowing one another. And then: they offer my kids the nasty fireballs. My kids are game. They spit them out, beg for water. So much laughing. My kids are part of the team. It’s impossible. It’s a dream.

Late in the game, my notes get hazy. The innings wind down. Maybe there’s a cool breeze out of the foothills. The park is mostly full. The Crawdads lose by one.