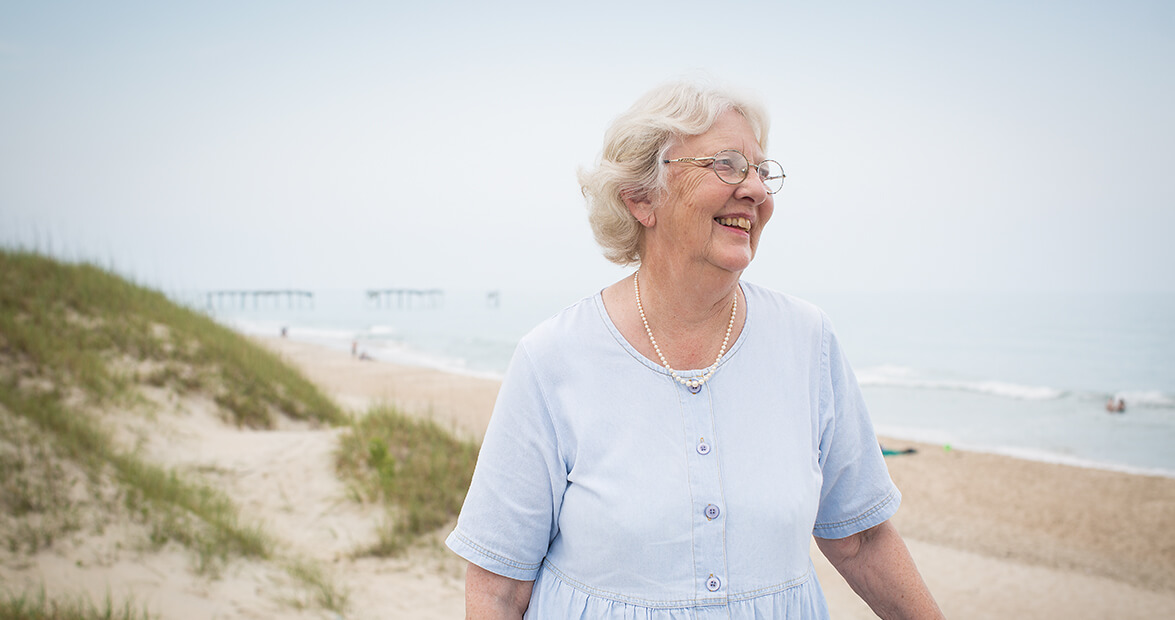 Feature Image: Mary Helen Goodloe-Murphy isn’t your typical radio DJ. And Outer Banks residents and watermen, who depend on Radio Hatteras for island news, wouldn’t have it any other way.

An ocean overwash trumps everything — Kenny Loggins and Pharrell and Celtic sea shanties. “If I’m on my way home [to Rodanthe],” Mary Helen Goodloe-Murphy says, “and I run into an overwash, I turn right around and go back and find someone here and say, ‘We gotta get this thing on!’”

When heavy surf, or merely a full-moon tide, causes the Atlantic Ocean to spill across NC Highway 12, it’s news. A wreck or a propane gas leak, or any other occurrence that shuts down the two-lane asphalt lifeline linking the 21 villages of the Outer Banks, is critical information for the locals.

“Oh, there were plenty of radio stations, sure,” Goodloe-Murphy says. Commercial stations out of Nags Head, and WUNC’s public radio. Stations that broadcast news, weather, country music, and rock. “But you couldn’t ever find out what was going on down here,” she continues. “If you could get them.”

Radio Hatteras is a community radio station. As such, with news like an overwash, the announcement includes nothing about, say, mile marker 42. “You just say, ‘North of Buxton,’ ” Murphy says. “Everyone knows where we’re talking about.”

Radio Hatteras came into being to serve the needs of a particular community, an island community. And without this community, 99.9 FM and 101.5 FM wouldn’t exist. Every single person involved in the station — from the programming to the graphics, engineering, announcing, recording, and, oh yes, founding — is a volunteer.

• • •
Carol Busbey sits before an extra-large computer screen filled with lines of type highlighted in greens, reds, and whites that, on closer inspection, are names of songs. The color denotes a music genre (hip-hop, beach music); white stands for a PSA, or public service announcement. Computer software randomly selects and shuffles songs, but Busbey is programming, making sure that songs aren’t repeating themselves too often and that the recordings are high-quality. Sometimes she has to edit out the background audience noise of a live concert recording.

Busbey moved to Hatteras Island 39 years ago for one reason: to surf. Surfing, and the thriving surfing shop she owns and runs with her husband, seems a far cry from radio scheduling. And yet here she sits, making sure a Rolling Stones song fits the time that it’s been allotted. The station plays everything, all kinds of music. “It’s just like Hatteras Island weather,” Goodloe-Murphy laughs. “If you don’t like it, hang in there for a few minutes and it’ll change.”

Goodloe-Murphy came to Hatteras from Wilmington, Delaware, in 1986, because she’d visited and loved it. “I’m a ‘come here,’  ” she says, using an island term. Goodloe-Murphy, who’ll be 70 this year, is plainspoken and plainly dressed and self-effacing. She has to be coaxed into admitting her title with Radio Hatteras: president of the board.

Her civic résumé is lengthy, including current vice president and former president of the Civic Association. She opened a thrift shop to support women who need social assistance that, 28 years later, has expanded to four locations. And she’s a member of the committee that sought and, six years later, succeeded in having Highway 12 designated a National Scenic Byway, one of only 150 in the entire country.

Oh, and for 10 years, she was a firefighter with Chicamacomico Banks volunteer fire department.

A firefighter? “That’s part of being a community,” Goodloe-Murphy says. “I wasn’t the first woman to fight fires in Chicamacomico Banks. You just gotta do it. It’s a team effort. Everything I do has involved a team of volunteers that has a similar vision.”

The station’s music is “just like Hatteras Island weather. If you don’t like it, hang in there for a few minutes and it’ll change.”

Radio Hatteras began as a gleam in the local eye 30 years ago, when Richard Marlin and Lou Browning sat around the Frisco Fire Department, wishing for a community radio station. Eventually, the Cape Hatteras Electrical Cooperative agreed, realizing that the co-op needed a way to communicate with its island customers during power outages. A small board was organized. Meanwhile, up in Arlington, Virginia, David Wilson, who vacationed on Hatteras, realized that he couldn’t run the two digital stations he’d acquired from Virginia. Wilson asked the Hatteras Island Rescue Squad if they wanted the stations. They didn’t, but Marlin happened to be present when the offer was made. And he absolutely wanted the licenses for a community station that would broadcast 24/7.

The race was on. The Federal Communications Commission won’t allow frequencies to be “dark,” or unused, for an unlimited amount of time. For 99.5 FM and 101.5 FM, the deadline expired at midnight on March 14, 2013. On March 14 at 6 a.m., after someone had spent the entire night in the studio, Radio Hatteras went on the air with  “The Star Spangled Banner.” Next up? “Wake Up Little Susie,” followed by The Beatles’ “Here Comes the Sun.”

Not bad for an outfit entirely dependent on the kindnesses of others. Individuals donated their music libraries to fill the station’s Digital Jukebox, the automation software the station now uses to keep music playing 24/7. Additional equipment was purchased thanks to a grant from the Outer Banks Community Foundation. And, “We would not be here without Dare County,” Goodloe-Murphy says. “The commissioners have been very generous.” The station’s $12,000 down-to-the-penny annual budget is entirely underwritten.

An underwritten, volunteer-driven, and volunteer-staffed community radio station has no need for ads to generate revenue. Besides music, then, what will you hear on WHDX and WHDZ? For one thing, bulletins for the Emergency Broadcast System (EBS), which breaks into programming “all the time” for storm watches and warnings. A clipboard holds a schedule of the EBS tests — those eerie alien wails — that the station is required to perform weekly. For another, news reports of anything that affects islanders and “our watermen,” the people who make their living on, or from, the water. Small craft warnings. News on an inlet that’s closed, a planning initiative, a developer’s interest. A federal action that might not affect Elizabeth City residents may very well affect Hatteras fishermen, and Radio Hatteras exists to make them aware of it.

Then there’s the special programming, with regular, weekly spots. “Breakfast With The Beatles.” Selections from local musicians. Celtic music streamed from Australia. Coastal Voices, featuring interviews with locals. “This day in Hatteras history” anecdotes. Clara Scarborough, from the Graveyard of the Atlantic Museum, records shipwreck stories.

Besides Murphy, 19 additional islanders keep Radio Hatteras humming; or, rather, running. They’re volunteers, with other lives and other careers: An artist. A vice president of the North Carolina Beach Buggy Association. A real estate agent. An antiques store owner. An electrician.

It’s time for “The Queen of the Surf Guitar” — Busbey is the only announcer with a handle — to open her surf shop. “I’ll be back tonight,” she says, and walks past a wall papered with signs and sticky notes. “Hi folks,” reads one. Below is a suggested script for the bottom-of-the-hour announcements. A poster-size, hand-lettered list of music genres — beach, gospel, big band, hip-hop, rock, blues, Broadway — commands most of the panel.

“We haven’t gotten to Broadway,” Goodloe-Murphy says. “We have to figure out a time when it’s not going to drive people away. Maybe Sunday.” Hang around long enough, and no doubt she’ll find a way to broadcast beloved show tunes for all the sing-along souls on the Outer Banks who’d like a little Wicked with their overwash.