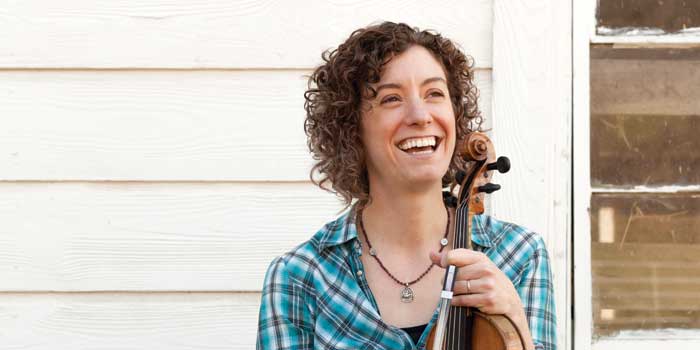 Even as a preschooler, Rayna Gellert immersed herself in music her family made and the music they played from a collection of old-time records. Sometimes that meant reveling in string-band folk songs, but just as often the 4-year-old anguished over dark and powerful murder ballads.

“When you’re at that age, your imagination is so vivid,” Gellert says. “Hearing the story was like watching a movie. A murder ballad that had really intense imagery just spoke to me.”

Gellert is the daughter of musician Dan Gellert, a legendary old-time banjo and fiddle player who is widely considered one of the world’s best talents. Rayna Gellert grew up in northern Indiana alongside her father’s influence.

When Gellert, who started playing fiddle at 10, came of age in the early 1990s, she traveled halfway across the country to attend Warren Wilson College in Swannanoa. And when she arrived, her musical history was not far behind.

Many in the Asheville-area music community, specifically those of the string-band variety, knew of her father, and they knew that she played music, too. “It made me feel like I could make a fool of myself playing music, and not embarrass my dad,” Gellert says.

Her past followed her, but it did not define her. (To this day, she plays a fiddle that belonged to her greatgrandfather, a Hungarian orchestral musician.) She “fiddled her face off” in contra dance halls, coffee shops, and dormitory stairwells, laying the foundation for a musical career that she continues to build today.

It took years for Gellert to acknowledge that music isn’t just something to do, it is what she does. Until then, she worked. She made windows on an assembly line during summer breaks. For several months in 1999, she toggled two jobs. She cleaned hotel rooms on weekends, and during the week, she transformed into a stonemason’s laborer in Black Mountain, hauling rocks and mixing mud.

It’s difficult to imagine the lithe young woman tackling such work. But she embraced it. “It was so satisfying, to take stones and dirt and turn it into something beautiful,” Gellert says. “I used to go around making all my friends feel my biceps. I was lifting enormous rocks all day.”

Then she landed a three-week tour in Europe. She had to quit everything.

She earned her chops playing and recording with some of the region’s and nation’s most celebrated musicians: Abigail Washburn, Loudon Wainwright III, Tyler Ramsey, Robyn Hitchcock, and others. She spent five years touring with the popular band Uncle Earl, releasing two albums with the members on Rounder Records. She traveled the country playing music festivals, such as Bonnaroo, Telluride, and RockyGrass.

It is this mix of past and present, memory and music, that defines Old Light: Songs From My Childhood and Other Gone Worlds, the debut solo album Gellert released in 2012. A mix of old-time ballads and original songs, the album is deeply rooted in American traditional music and in the idea that memory — individually and collectively — is powerful and fragile.

Gellert tentatively called the album The Memory Project. “I know I’m partly attached to it [music] through childhood, that I’m looking at it through my own memory,” she says.

That’s why some songs are remakes of traditional (and traditionally deadpan) tunes from her childhood, which she has reworked to make more evocative of the way she felt about them as a young girl — scared, unnerved, emotional. Many of the album’s original songs tell evocative stories yanked from the airwaves of “This American Life” and BBC documentaries, mostly tales of amnesia and brain injury that are simultaneously terrifying and titillating.

“It’s an exploration of the human experience, of looking back on childhood, and the filter of our own memory,” Gellert says.