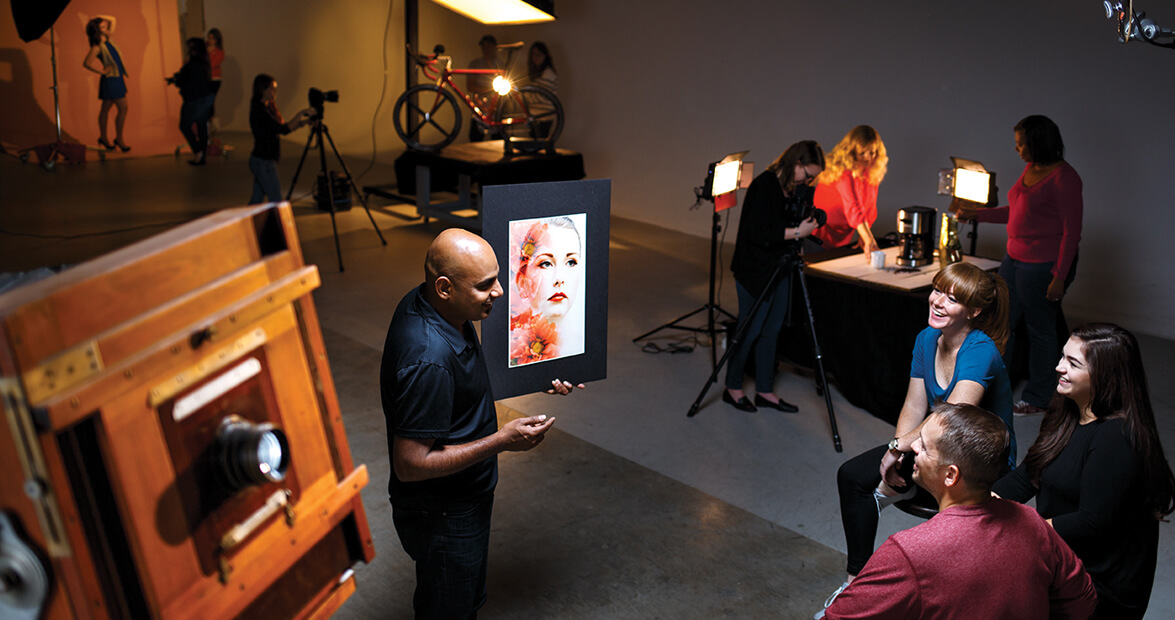 It’s a blue-collar program. Everyone I meet tells me that, which is disorienting, because I was expecting an art school. Or maybe it’s because I hadn’t thought about photography as anything other than art. But I tell my own students — I teach writing — basically the same thing: This is work. Hard work. It may well be several other things, highfalutin artistic impulse included, but first and foremost, it’s work.

I’m not really here, though, on a mission of semantics. I’m here because a state-of-the-art photography program exists, almost impossibly, at Randolph Community College. I ask Kevin Eames, who’s worked his way up to direct the program from being a student in 1995, and then a lab tech and an instructor in the intervening years, why this is. Why here? “Used to be, the most pictures taken per day in the whole country were in Greensboro and High Point,” he tells me. Again, I ask: Why? He smiles. Eames is a man of quick and easy wit, and somebody who likes the timing of a joke, or a revelation: “Furniture,” he says. “Lots of pictures of furniture.”

And not just furniture: Launched in 1967, in part to support the market in High Point, and in part to support the photo studios growing out of that market, the program has grown so much that it’s renovating its already airplane-hangar-size facilities (35,000 square feet). Each year they enroll as many as 140 students. This is serious business. 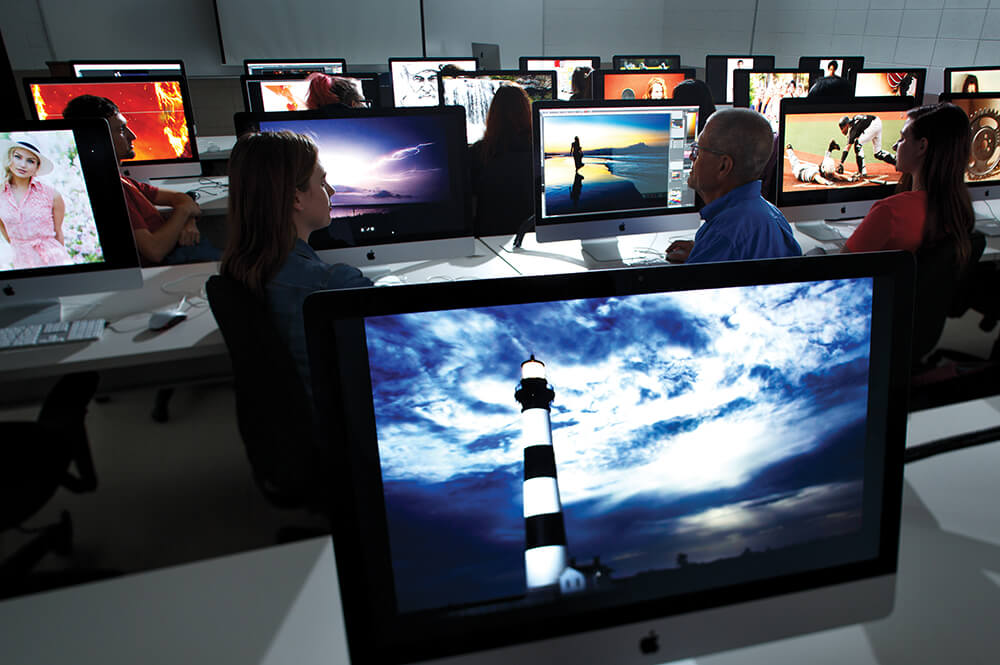 I tell Eames that now’s probably a good time to confess that I’m a pretty avid amateur photographer. That I bought a fancy rig after my kids were born, that I have a Flickr site with 3,000 pictures on it, that I spend more time than I’m usually ready to admit thinking about shutter speed and aperture and light. Only later do I realize I’ve said this in precisely the same tone of voice as the person who tells me, at my bookstore reading, that he’s got a great idea for a novel.

Eames suffers me with generosity, though, and takes me back behind the curtain.

The building smells of darkroom chemicals, though at first the scent is hard to place: There are so few camera stores left that all I know for sure is that I’m happy, and don’t want to leave. It’s a smell in the same olfactory family as used bookstores. Things are done right here, the smell says. And slowly.

“We start everybody on film,” Eames says. “Medium format. Black and white. No cropping.” In other words: If you’re a student here, you go back to the very beginning.

“Used to be, the most pictures taken per day in the whole country were in Greensboro and High Point.”

Students in the fundamentals classes take pictures of gray cards first. Things need to be level, square, flat, and true. The light needs to be right. Perfect. Then they work on depth of field. Then motion. I see a contact sheet of a figure running left and right, then toward and away from the camera. There’s a paper grocery sack in the mid-ground. To focus on, I realize. You don’t try to shoot the thing in motion. You shoot the thing near the thing in motion. Already I want to enroll in the program. Already I want to go back home and start taking pictures.

In the hallway, there’s a glass case filled with photographs the first-year students have taken of an Asheboro baseball game. “A summer assignment,” Eames says. “Gotta have action, gotta have the ball. Everything in the frame in the right place.”

A little later, Eames shows me a letter from a former student, one of the dozens upon dozens who are working professionally in the field now. “Thanks to the faculty for pushing me to ingrain technique into everything I do,” the student writes, and then he thanks them for “making me constantly check white balance, exposure, batteries, lens choice, placement, and the list goes on.” Knowing how to do everything on the “work” side of things freed him to concentrate on his art, he writes. “Those two years of photo hell didn’t go to waste.” 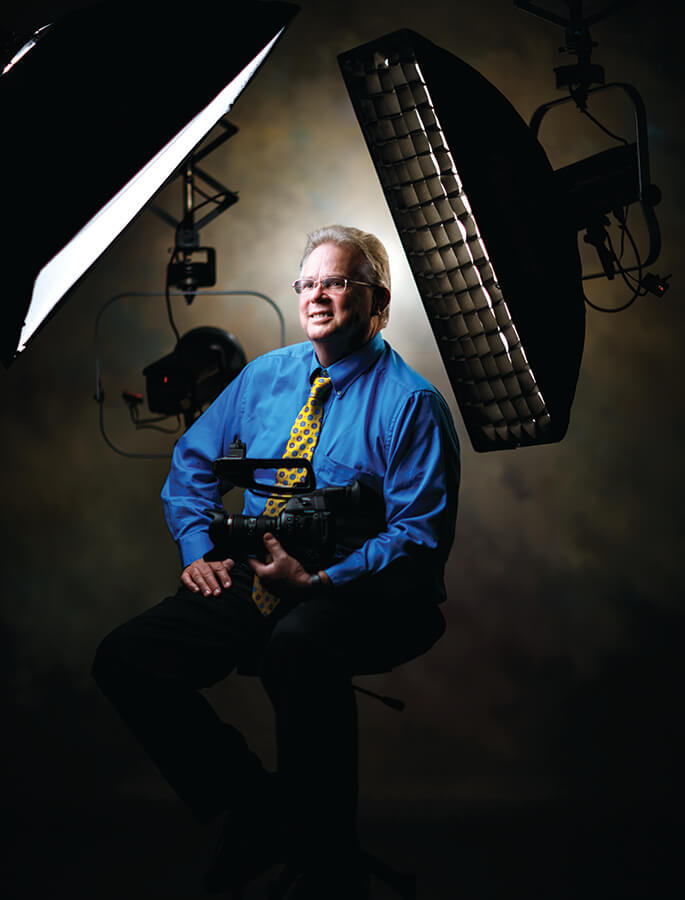 “We work them so hard,” Eames tells me. Two straight years, summers included. “We even teach them to coil extension cords.” But when they get out, he says, they’re ready to start a career. They get jobs.

They get jobs taking pictures.

“All the drama in the photograph is with light,” says Dhanraj Emanuel, the commercial photography instructor who’s leading second-year students through early portfolio critiques. They’re looking at a shot on the computer screen of lemons and radishes and cucumbers, sliced paper-thin and backlit and, frankly, beautiful. Everything Emanuel’s pushing the students toward has to do with intentionality. “What do you want to be?” he asks. “A food photographer? Still life?” The student confesses that she’s not yet certain. Maybe both. All she knows for sure is that she had fun making the picture. Emanuel pivots with a practiced ease. “That’s good, too,” he says. “If you’re not having fun with it, don’t do it.”

A second picture by the same student: a deconstructed taco, ingredients hovering one over the next. She’s considering doing more deconstructed foods; not burgers, because that’s tired, but maybe a birthday cake? The room loves this idea. But which project should she pursue? Deconstructed food, or backlit food? “Well,” Emanuel says, “sometimes we work on more than one project at a time. The question isn’t ‘which do I want to do more’ versus ‘which do I do now.’ ” He smiles. “It doesn’t really matter. What you have to do is start.”

Photography, writing, music, pottery, cooking, anything else difficult yet worth doing: The conversation about each of these things is essentially the same. What do I want to make? How can I make it? Can I withstand my first attempts not being good enough? Will I learn to revise? To practice?

They get a lot of “second-chancers” at RCC, some of the faculty tell me. Plenty of traditional students, too, but also a lot of folks on second or third careers, people who always loved photography but weren’t sure how to make a life of it. Then something shifts, and they take that chance. They start. They work.

What I love about my digital camera is that I can take three trillion pictures of my boys and hope I get two good ones, I say. This brings a kind of darkness down upon the room.

“Everybody’s a photographer now,” says Erin Arsenault, the lead portrait instructor. “That’s why we have to train our students to stand out.” Eames and another instructor, who teaches the multimedia class, agree. They each talk about how important it is to get the work right “in camera.” Post-production isn’t exactly frowned upon here, but we’re back — again — to that notion of a photograph being a made thing. Not a snapshot, not an accident. 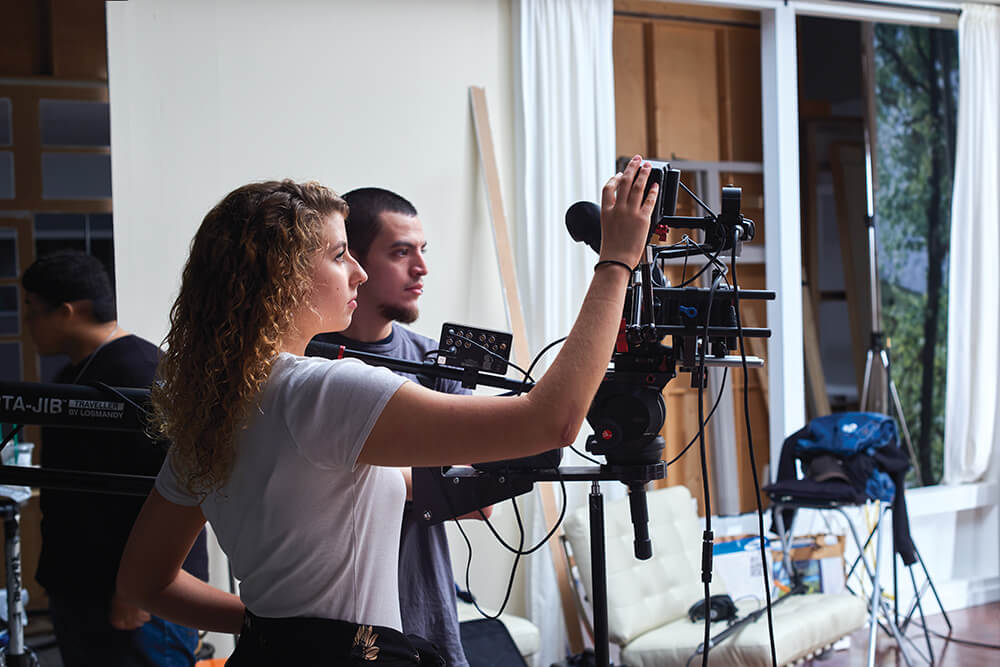 When commercial photography student Brinsley Edwards worked as an intern for THS Creative in Greensboro, RCC alumnus Aaron Acosta supervised her on the job and shared his real-world skills. photograph by Dhanraj Emanuel

One way to learn that difference (maybe the only way) is to be around people. Eames talks a lot about the way light behaves, but also about the way people behave. “Technology does not replace humanity,” he says. “In photography, humanity is the most important thing.”

Before I leave, Eames tells me something fantastic: Every year, the program stages a mock wedding. There’s a real church and pastor, and the first-year students play the wedding party. The second-year students take pictures. One year, two students in the program actually got married at the event. “So I guess that one wasn’t so ‘mock’ after all,” says Eames, who met his wife in the program, too, back in ’95. I ask: Did the students still take pictures at the real wedding? Of course they did.

Somehow this seems a fitting coda, work and life and love all wrapped up in as tidy a bow as one gets these days. On the floorboard of my car: my fancy camera. I’m not sure why I brought it. Proof of membership in this strange tribe, maybe, though of course my membership is fraudulent. For now. But all I can think about the whole drive home is when the kids might get home from school, what the light might look like then, if I can maybe get them to stand on the front porch just so. And maybe I’ll slow down a bit. Take fewer, but better, pictures. Start to learn, again, to see.