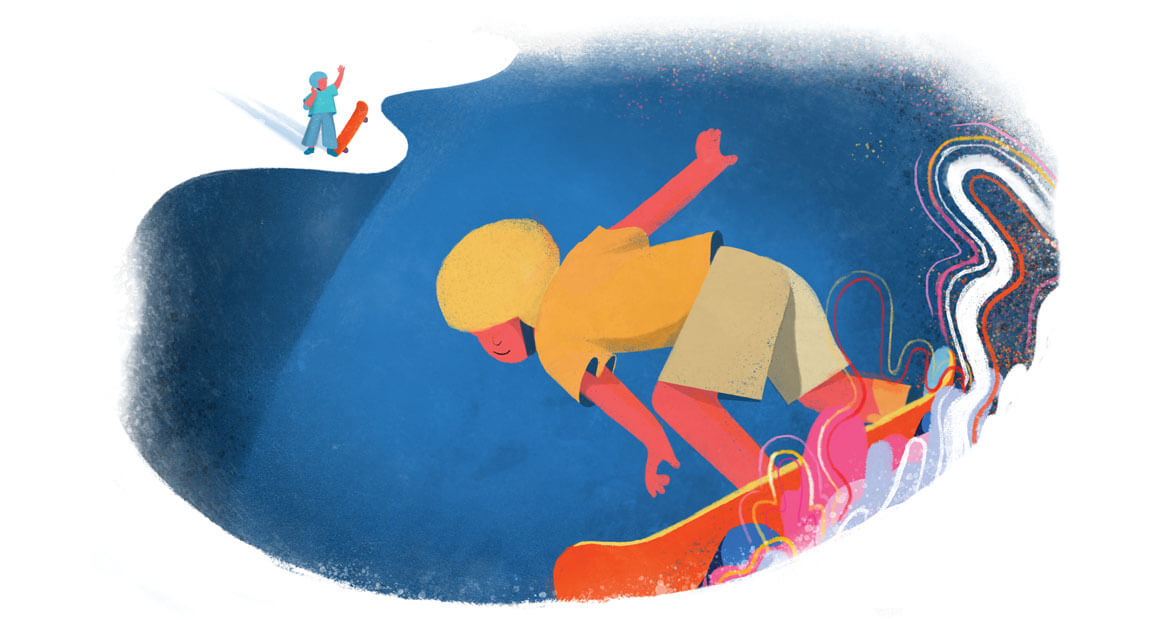 I never learned to ride a skateboard. I wasn’t quite brave or cool enough, and then the window of opportunity closed, and I found myself second-chair trumpet in the high school marching band. These things aren’t mutually exclusive, of course, but by 16 years old, I was maybe too brittle or too fearful or too something to try getting on a skateboard. I surfed in the summers. That was enough.

Or maybe it was never having motive and opportunity at the same time, as each of my kids did two summers ago at a block party. I’d gone to get a second hot dog or a second beer, and here came first one kid (helmeted, thankfully) and then the next — whatever his brother tries, The Wee will also, and immediately, try — down the driveway on a skateboard. It took them less than an hour to learn how to turn. By the end of the night, when a slightly older kid came down the street on a board of his own, my older son, The Toad, usually reticent with strangers, rolled right up to him and said, “Dude, do you know any rad tricks?”

It’s a short line from that evening to the following Christmas, when we ordered them cheap kid boards of their own for under the tree. It’s a shorter line still from there to the excellent and now-sadly-closed Exodus Skate Shop in Winston-Salem, where we bought them real gear after they quickly outgrew what the older guys at our local skate park were calling “popsicle sticks.” And if it’s not the shortest line of all, this one is certainly the strangest: How many hours this year have I found myself sitting in the open back of our minivan, watching these two kids practice kick turns and ollies and the 16 other stray pieces of this new language they’ve acquired? My boys have become skate rats. They can’t get enough. Weekend mornings. Any sunny day after school. And — to my untrained eye, anyway — they’re getting pretty good.

I’ve learned to love the sound of the wheels on concrete, because that’s the sound of my older son, The Toad, teaching himself to be himself. He’s a person given to a bit of anxiousness about the world, which makes this whole endeavor so surprising: Somehow, learning to drop down a steep concrete hill on a skateboard gives him a calm and confidence he doesn’t always find so easily elsewhere. “It’s my thing,” The Toad whispered to me at bedtime one night last fall. He’s in third grade, a time when it seems that all the social machinations of the world start to kick in, and I think it helps to have in one’s back pocket the notion that there’s at least one thing you can do well. He’s fast. He’s fluid. When he’s on the board, he’s in a world utterly of his own choosing — and he’s happy.

And his little brother? Fearless to the point where it seems it’s not a question of if we’ll go to the ER, but when. He’s jumping off of coffee-table-height obstacles. He’s conquered the same ramps and hills that his brother has. His helmet bears far more scratches and dents. The one image of all of this that comes most readily doesn’t so much have to do with season as with light — early morning or late afternoon, the sunshine all low and liquid and these two boys zipping back and forth at our skate park, a place with a swimming-pool-size bowl, a huge quarter-pipe, and a long run of bumps and ramps in between. Their hair is long and unruly and spilling out from underneath their helmets, their shoes are barely tied, and they’re hollering at each other after each stray success: “Bro, did you see that, bro?” The sky is high and blue above them, and the huge oak that overhangs the middle run of the park is throwing shadows all the way into the back of the van, where it’s my job to sit and read and pretend like I’m not watching their every move. Sometimes they crash. Sometimes they cry, and I’ll walk out there to tell them they’re all right — so long as they are. Mostly, though, I try to let them be. Here’s something I don’t know how to do at all, something they’ve got to teach themselves. They’re growing up, these two boys. They’re the littlest kids at the skate park — but not for long.