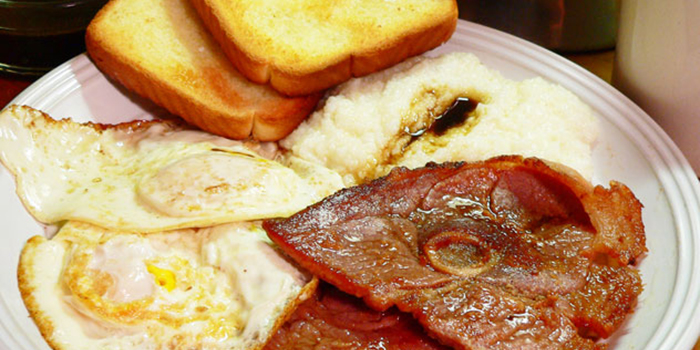 Through the years, many people have started their day with a breakfast consisting of country ham and red eye gravy. Country ham, first mentioned in print back in 1944, is a cured ham that is oftentimes smoked and very salty.

According to Wikipedia, red eye gravy is a dish typically served in the Southern United States. It is made using pan drippings left from cooking country ham or bacon. Normally black coffee is used to deglaze the pan. The name “red eye gravy” comes from the appearance of the gravy once it has been placed in a serving bowl.  While the dark coffee and meat bits sink to the bottom, a layer of grease is usually visible on top – the result, giving the appearance of a human eye.  And, so ends our history lesson for the day.

The December 2013 issue of Our State contains an article about Henry West’s Westwater Country Hams down in Duplin County. It’s an interesting read and it brings back lots of memories from my childhood of watching my dad rub salt all over a ham or two right after we killed hogs on Thanksgiving Day. Later, he’d hang them up in an old storage building out behind our house where they would remain for months before we ever had a chance to enjoy their distinct flavor.

I’ve been telling my older brother lately that I’ve recently developed a hankering to try and cure a ham myself. I’m not sure where the urge is coming from, other than all of the cookbook recipes and stories I’ve read over the past few years, along with many stories that my brother has told me while we travel the roads of North Carolina and beyond delivering his custom built pig cookers. He thinks I’m a bit wacky, but he’s offered his tool shed to let me hang it up in. We’ll see.

I do hope you’ll give our red eye gravy recipe a try. If you enjoy country ham and ever cook it at home, the gravy is just too quick and simple to not try out at least one time.  I’ll be waiting to hear from you in the comment section below. Feel free to share your memories of country ham with us as well. So, if you’re ready … let’s get cooking.

What you’ll need to make the gravy 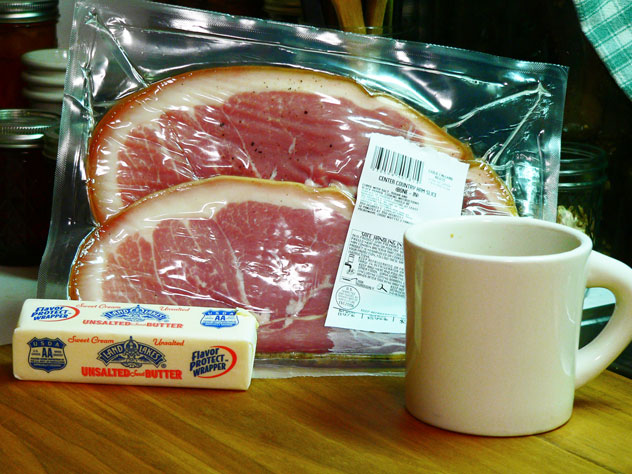 You’ll need these ingredients to make your country ham & red eye gravy. Yep, there’s some coffee in that cup. 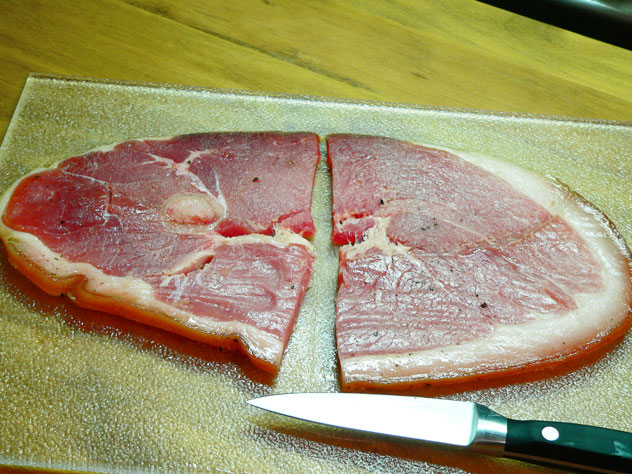 Most center cut slices of ham are pretty large. It will be easier to fry if you cut the slices in half. 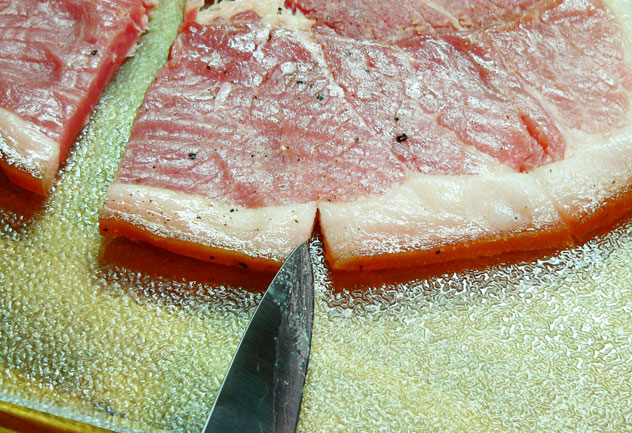 Make a cut in the layer of fat around the ham about every three inches. This will help keep the ham slice from curling badly while it cooks. Some folks also like to remove the “rind,” or outer skin layer, from the ham prior to cooking. This is entirely up to you. I left the rind on the slice. 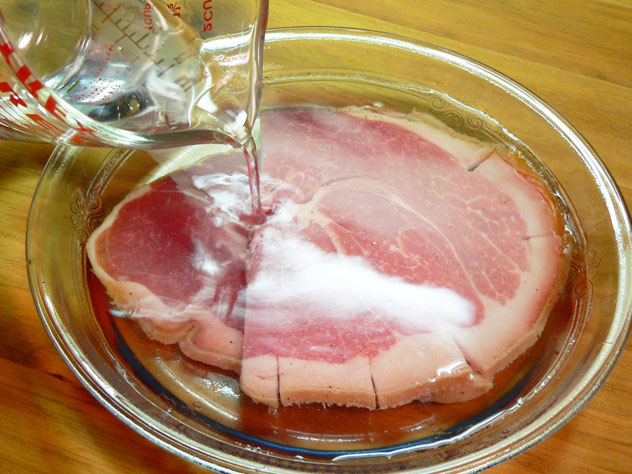 Country ham is usually very salty. I prefer to soak my slices in water to try and reduce some of that salty taste. Soaking is not required, but I highly recommend it. A glass pie dish comes in handy for soaking one or two pieces. Simply place the ham in the dish, cover it with water, and let it sit for about 30 minutes or longer. Some of the water will absorb back into the ham and cause it to plump up a bit. Some folks opt to soak theirs in milk, but water will work just fine. 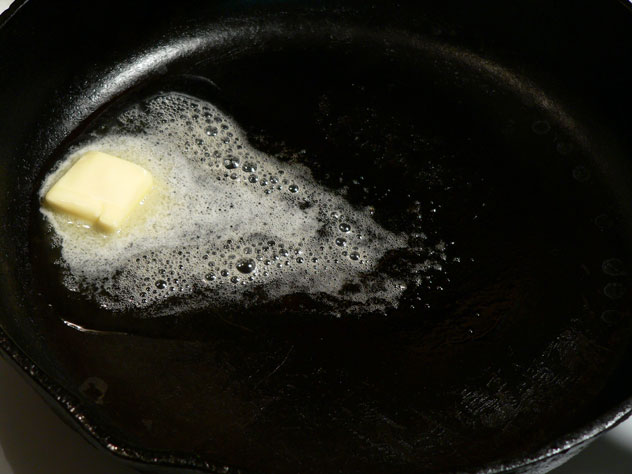 When the ham is ready to fry, remove it from the water and it pat it dry with paper towels. Then place your skillet over medium heat on your stovetop. When the pan gets hot, drop in about one tablespoon of butter. 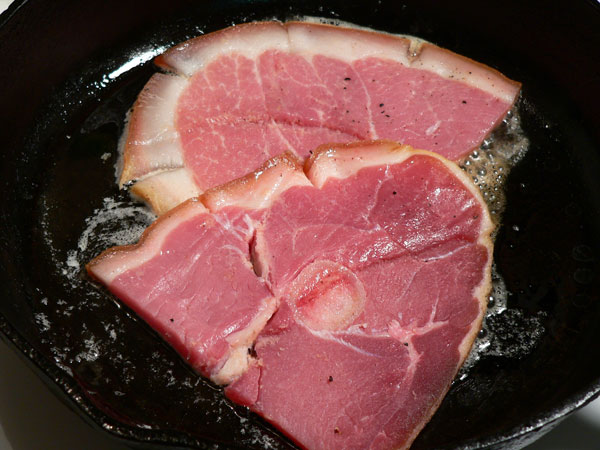 Place the ham in the skillet. As you can see, this is one slice of ham and it fills up my 10-inch skillet. 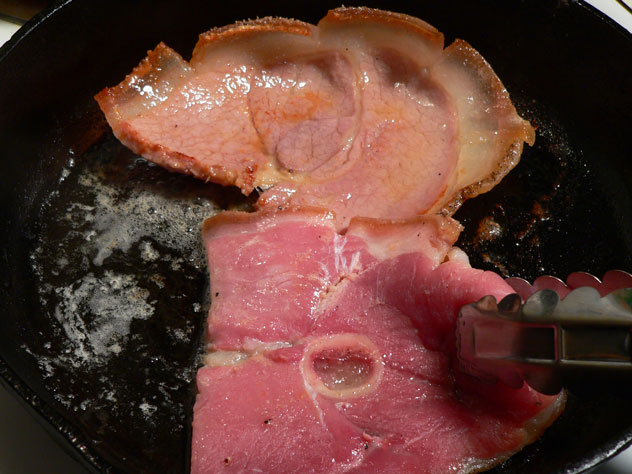 Country ham will cook pretty quickly. Turn it after about two minutes and let it cook until the fat around the edge is translucent. Do not overcook the ham – it can get really tough and dry if you do. Most folks that don’t like country ham have probably only had ham that was overcooked. Having said that, my late wife would order a ham biscuit at a drive-thru and tell them she wanted the hardest, driest piece of ham they had. If they didn’t have one, she’d ask that they “burn it for her.” To each his or her own…right? 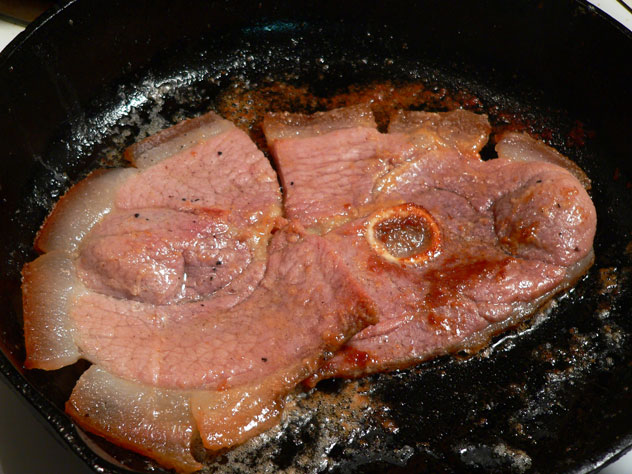 Cook it until you get it the way you like it. When it’s ready, remove it from the pan. 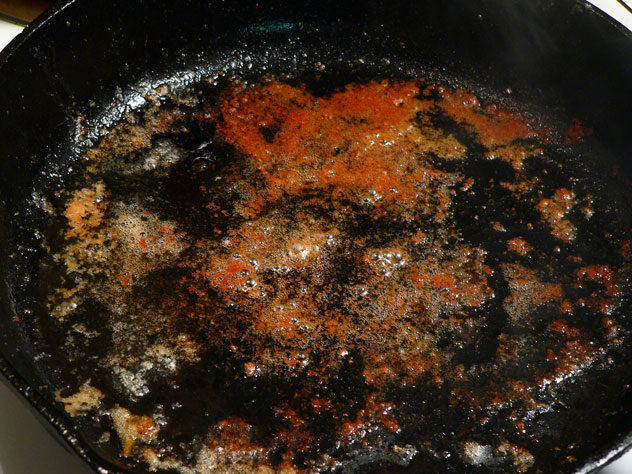 Don’t throw out the good stuff though! We’re going to use the pan drippings from the cooked ham to make our red eye gravy. You will need about two tablespoons of the grease. If you have more than that in the pan, pour it out, but save all the hard bits and pieces inside the skillet. Place it back on the heat. 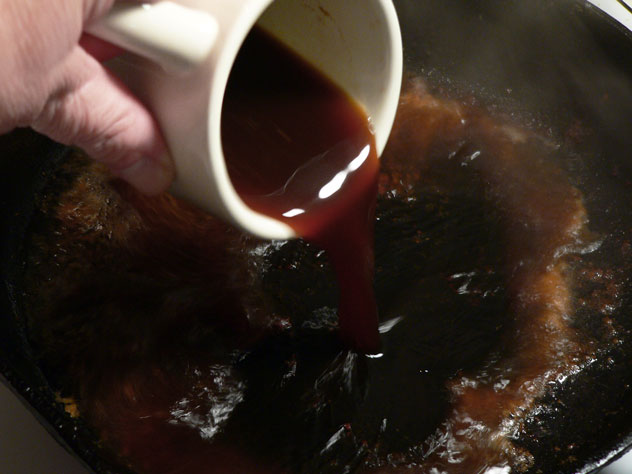 Pour the cool coffee into the skillet. It will steam and start to deglaze the pan. 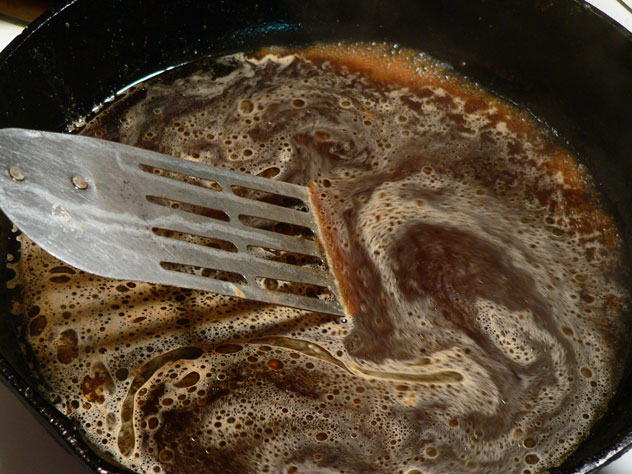 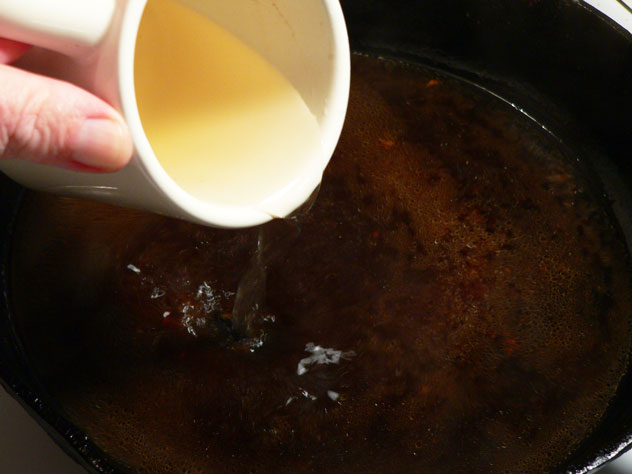 Next, add in the water. I’m using cool tap water, straight from the faucet. Stir that around some more. 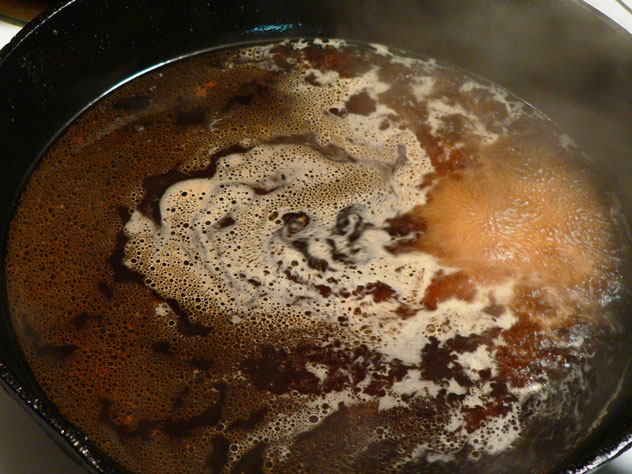 Continue to stir and scrape the bottom of the skillet as you let the liquid come back up to a low boil. Next, reduce the heat and let the gravy simmer and thicken. You’ll need to taste it to see if it needs anything. You might need to add a little more salt and maybe some black pepper. The gravy needs to reduce to about half its volume. During this process, the flavors will become more intense and concentrated. 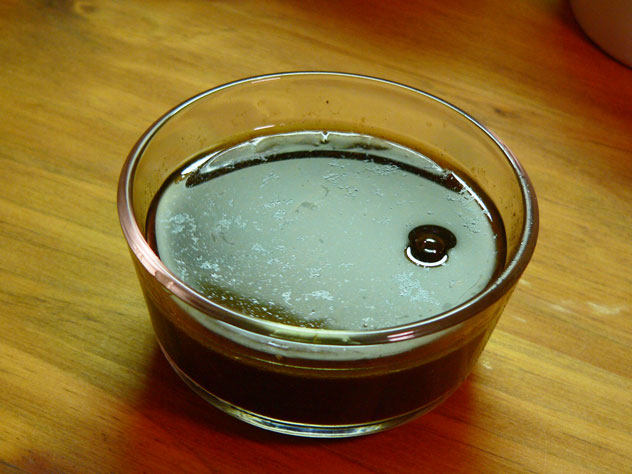 Your red eye gravy should be ready in just a few minutes. Remove the pan from the stove and pour the gravy in a small serving dish or gravy boat. 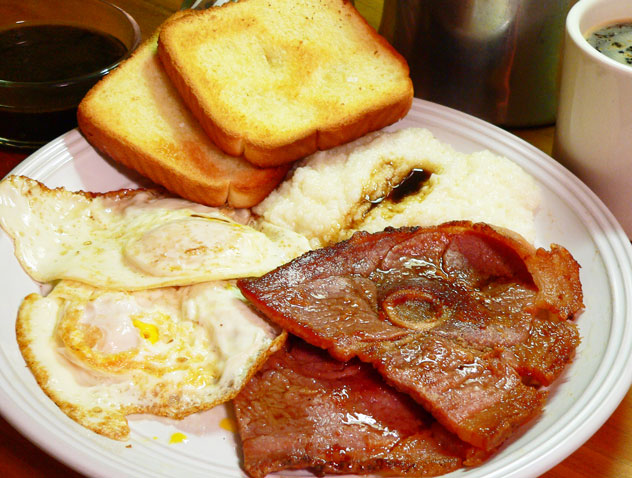 Serve the red eye gravy as a side with your country ham slices. Some folks like to dip a biscuit into the gravy and use it as an ‘au jus.’ It’s great to drizzle over the ham slice itself, or to add to some cooked grits. You might also like to keep a bit of jelly handy to help offset the saltiness in the country ham. Either way you try it. Enjoy!