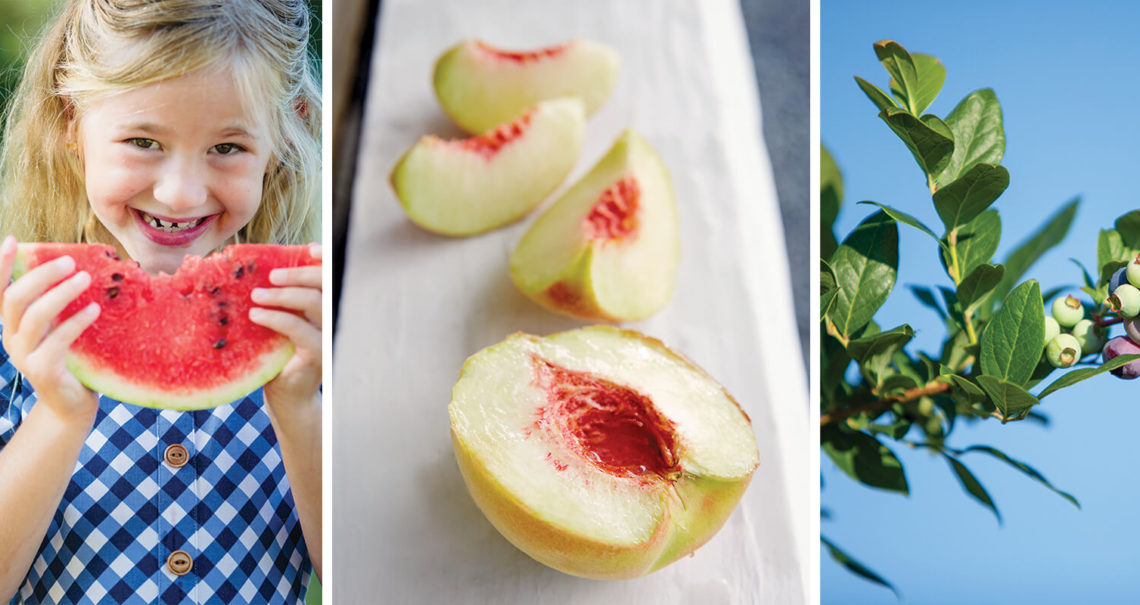 Bogue Sound is a gentle bowl of water that swells and falls between Morehead City and Emerald Isle. Since the 1930s, fishermen along the East Coast have motored to the sound in menhaden boats to dip their nets in calm waters, to harvest the abundant sea life there. But the Bogue grows more than sea life, and before long, fishermen began hauling another harvest back home, one found only in the easy, sandy fields alive from the sound’s salty breath: Bogue Sound watermelons.

“The soil’s more suitable here for pouring that sweetness into the melons,” says Alan Willis, president of the Bogue Sound Watermelon Growers Association. Willis is a third-generation grower who has harvested Bogue Sound watermelons for more than four decades.

“People think that Bogue Sound is the variety of the watermelon, but it’s not,” he explains. “It’s the location.” 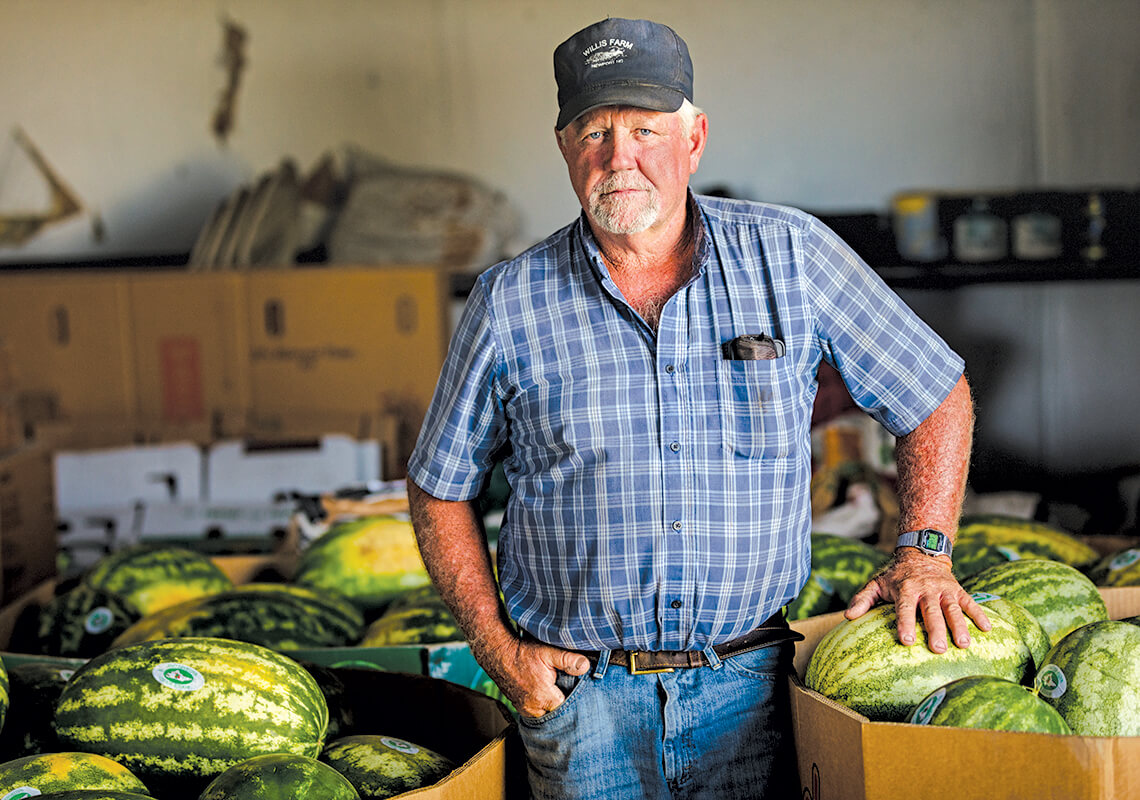 And, he says, Bogue Sound watermelons are proven sweet.

“We didn’t know if it was a myth, people bragging about their crops, but we actually had them checked for sweetness, and they truly measure sweeter,” Willis says.

The fishermen of nearly a century ago weighed down their boats with Bogue Sound melons to carry to faraway homes. Today, people come from across the country to load up their trunks with melons, squeeze one between the children in the back seat, cradle one in a front-seat lap. Some return home to plant seeds saved from these summertime treats. But away from the sound, the melons don’t seem to grow as sweet. Maybe they miss the Bogue’s salty air; its long, hot days and cooler nights; its sandy soil — these are the things that make sugars pool in crisp, red fruit. The salty air keeps leaves healthy, and the sunny days help those leaves make extra sugar. The sandy soil helps minerals tumble and flow through watermelon roots with ease.

Many summer watermelons pop that ripe-melon crack as you slice them open. Many have bright red flesh cradled in beautiful green bowls. They can be sliced into succulent sailboats, nibbled to cool crescents, those green-and-white smiles of summertime. They can be cut, chunked, scooped, or balled. But to be the sweetest, reddest melons, they have to be raised by Bogue Sound. — Eleanor Spicer Rice

Bogue Sound watermelons have been renowned for the better part of a century: As early as the 1930s, melons grown in and around Carteret County left the state in boats bound for Baltimore, New York, and Philadelphia. In 2005, local growers formed the Bogue Sound Watermelon Growers Association. This summer, stop by a member farm market and look for the association’s official sticker. For a complete list of growers, visit boguesoundwatermelons.com.

When it’s peach-picking time in the Sandhills, fourth-generation peach grower Ken Chappell sells more than two dozen varieties at his stand in Eagle Springs. He explains that even though 90 percent of his customers buy yellow peaches because that’s what they’re used to, about 10 percent can’t resist old-timey white peaches and come looking for them. 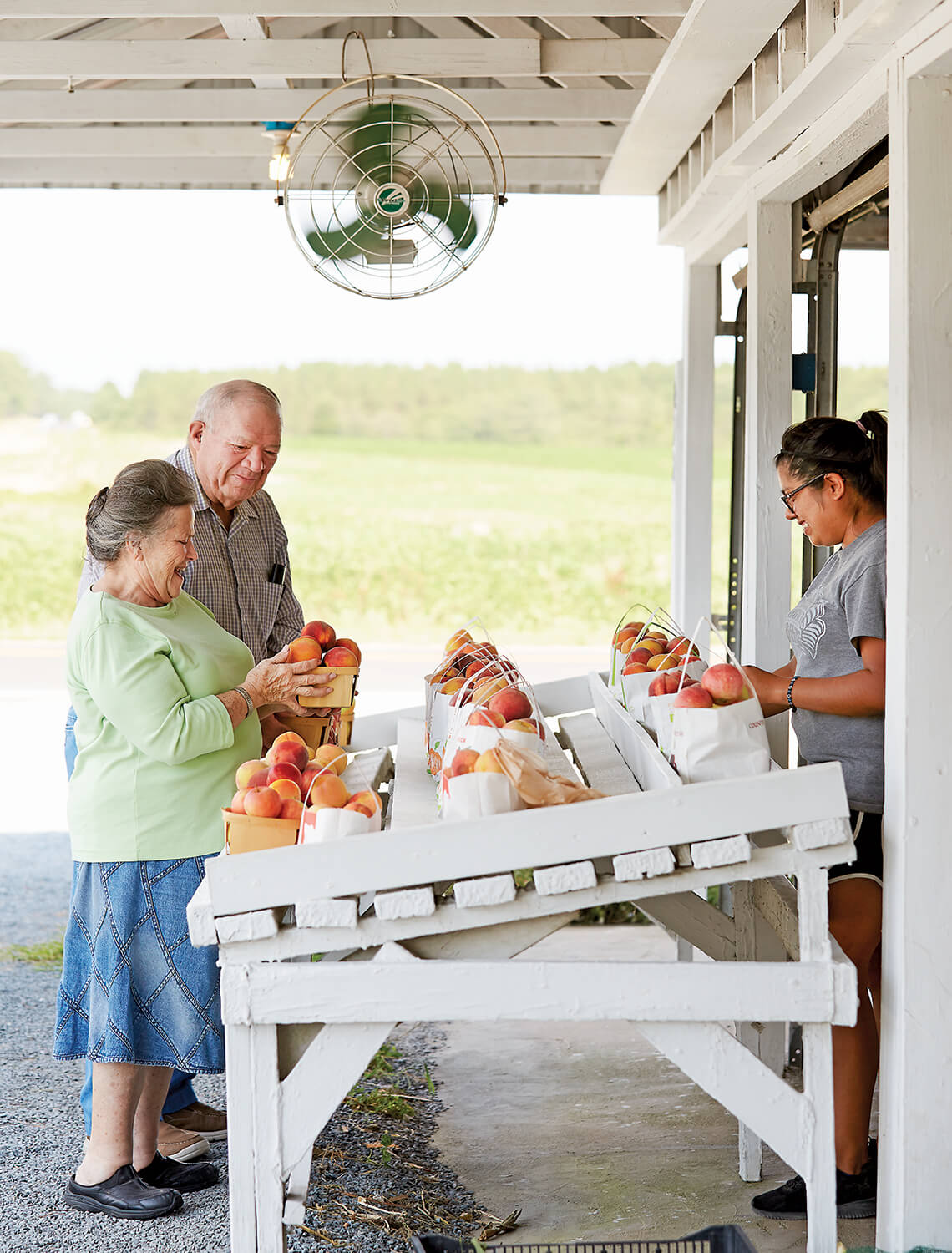 Each peach at the Chappell Farms stand in Moore County — including the China Pearl variety — holds the irresistible flavor and fragrance of summer. photograph by Stacey Van Berkel

It’s not just the color of a white peach that makes it special. “They have a milder taste. The old types are a bit soft, almost creamy, yet others are almost crunchy,” Chappell says. “The newer hybrids try to hit the middle to follow people’s preferences for peaches.” Driving alongside peach orchards, those in the know can spot a white peach tree by its leaves: one shade lighter and a bit more elongated.

The main difference, however, is the aroma. “White peaches have the best smell — a floral smell, sort of like roses, like perfume,” Chappell says. “If people pulling into a peach stand smell perfect peaches the moment they step out of the car, it’s probably ripe white peaches drawing them in.”

White peaches used to be a fleeting treat, eaten over the kitchen sink or the edge of the porch as juice ran down arms and dripped off elbows. They didn’t always keep well and turned brown quickly when cut. Newer cultivars have more staying power, remaining pretty in canning jars and freezer bags and cooking up well in cobblers and pies.

The gold standard for white peaches in North Carolina used to be the Belle of Georgia, and it might still be, with its firm and deeply flavored creamy white flesh tinged with red. But it has some competition from newer cultivars, like the China Pearl, developed at North Carolina State University in the 1990s. “The thing that comes to my mind when I taste a China Pearl is cotton candy,” Chappell says. He also grows Blushingstar, Carolina Belle, September Snow, and Snow Fall.

There’s a white peach for each phase of North Carolina peach season, and although some customers come looking for a particular variety, most are content to take home what Chappell calls “the peach of the day,” the ones that’ll suit all fancies because they are perfectly ripe and smell like a dream of summer peaches come true. — Sheri Castle

Some North Carolinians would say that their favorite color of blue isn’t found on a sports team jersey, but on a freshly picked North Carolina blueberry.

Blueberries grow all over the state, but they’re big business in Pender and Bladen counties, where the soil and climate help the bushes flourish. The state’s commercial blueberry industry started in Pender County in the 1930s, when a berry producer out of New Jersey recognized the potential in the growing conditions of southeastern North Carolina. For many crops, farmers want to see rich reds and browns in their soil, but the area’s natural mix of coarse white sand and black organic matter — known as “salt and pepper” soil — is ideal for blueberry production.

Although the Southern highbush blueberry is native to eastern North Carolina, most growers now focus on hybrid cultivars — many of which hail from North Carolina State University — to bring out the characteristics that both growers and eaters crave: large, firm berries with a sweet flavor and a clean pick.

At Shaken Creek Farms in Burgaw, brothers Curtis and Alfred Wooten grow various blueberries on their 80 or so acres. (They also tend around 1,100 beehives, enough to pollinate their own plants and a surplus to rent to other produce growers in the area. And, yes, they sell the raw honey, too.)

During the local berry season that generally runs from mid-May to August, serious blueberry devotees call ahead to track the progress of their favorite varieties, like Rebel, O’Neal, and Legacy. “Just like different wine grapes, different blueberries have their specific characteristics,” Curtis explains. “Eastern North Carolina berries are generally large, but the texture varies, as does their sweetness, depending on the type and the phase of the growing season. They don’t all taste the same.” Which one does he think tastes best? He quickly replies, “The best one is the one I’m eating at this moment.” — Sheri Castle