Megan Donahue and her mom, Lisa, love decorating day. They kick off the morning with celebratory mimosas while jamming out to artists like Hall & Oates, Marvin Gaye, and Elton John on Spotify’s “’70s Road Trip” playlist. When the drinks are done, the work begins as they stage their renovated school bus, now a tiny house on wheels, to get it photo-ready.

Today, Megan and Lisa are decorating a bus that they call Marcus (all of their buses have names) with minimalist decor and a clean, modern color palette of grays, blacks, and whites. They place black-and-white pillows on the furniture and white dishes on the dining table to match the interior and exterior paint — white with black trim. They adorn the walls and counters with faux plants. Lisa makes the beds with sharp hospital corners. They scrub the exterior with Magic Eraser pads — it takes three boxes’ worth to remove all the remnants of tree debris — until it’s spotless. Finally, after karate-chopping all of the pillows — a designer’s trick to create that perfect fluff — they high-five, hug, and jump for joy. 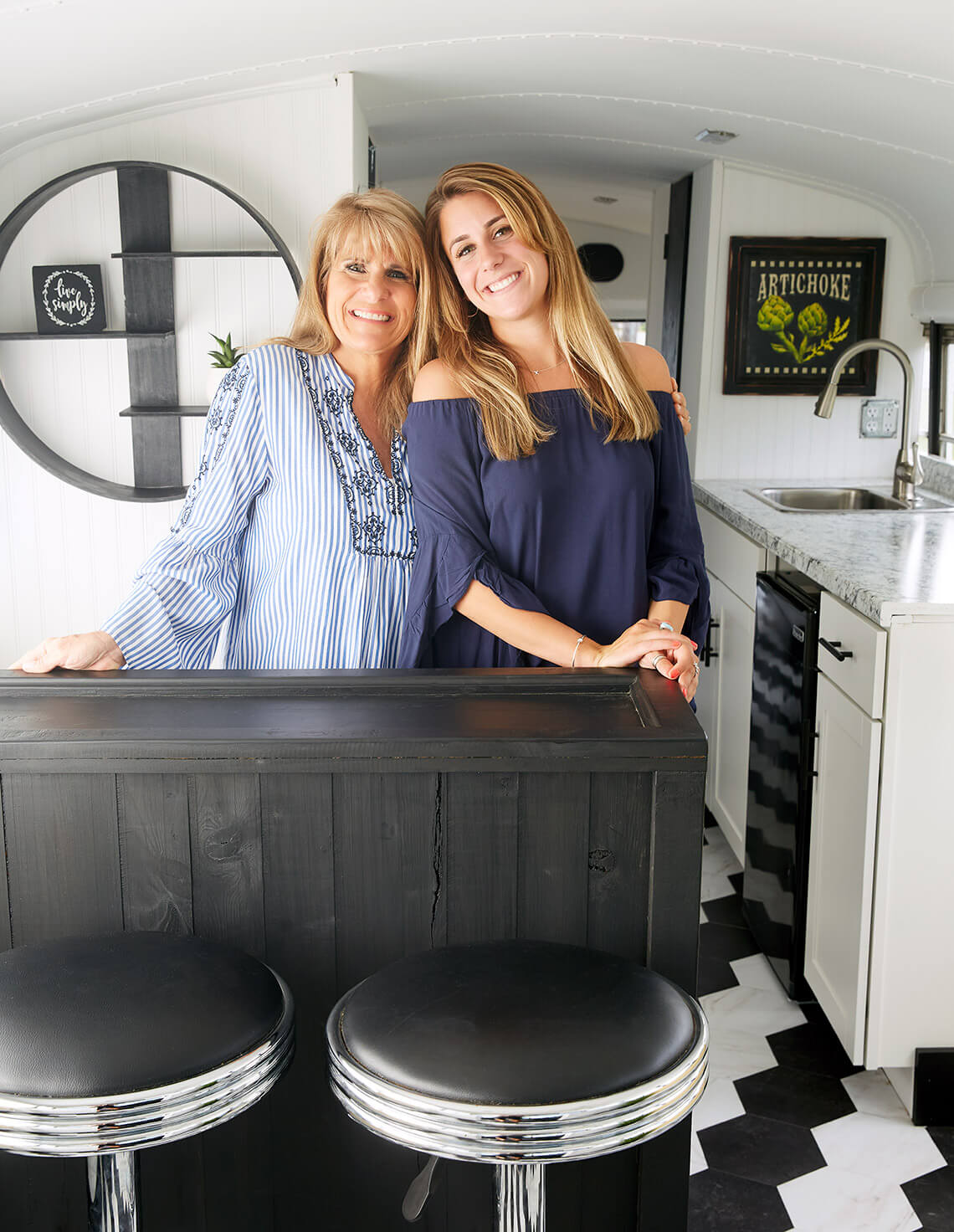 Lisa (left) and Megan Donahue’s renovated school buses — like this one, dubbed “Julius” — are designed for life on the road, with kitchens, living spaces, beds, and bathrooms. photograph by Stacey Van Berkel

The mother-daughter team has been renovating school buses through their company, Live Simply, since 2017, turning them into tiny living spaces complete with beds, dining areas, and, often, bathrooms. Termed “skoolies,” these increasingly popular repurposed buses offer adventurous souls the opportunity to pare down their material possessions and embrace a nomadic, minimalist lifestyle.

Megan started this project to honor the memory of her brother, Michael, who passed away in 2015 at age 15. She and Lisa describe Michael as an old soul, the life of the party who had a lot of love to give. “We don’t even cry talking about him,” Megan says, “because we’re just so lucky to have had him in our lives.”

Megan hoped to build a legacy for Michael that would share his passion for the outdoors and simple living with others, while also making use of the interior design skills that both she and Lisa have. Lisa has a background as a visual coordinator — redesigning rooms using what her clients already own — and staging homes for real-estate agents. She was pregnant while she was in school, learning her trade. “I was listening,” Megan jokes. 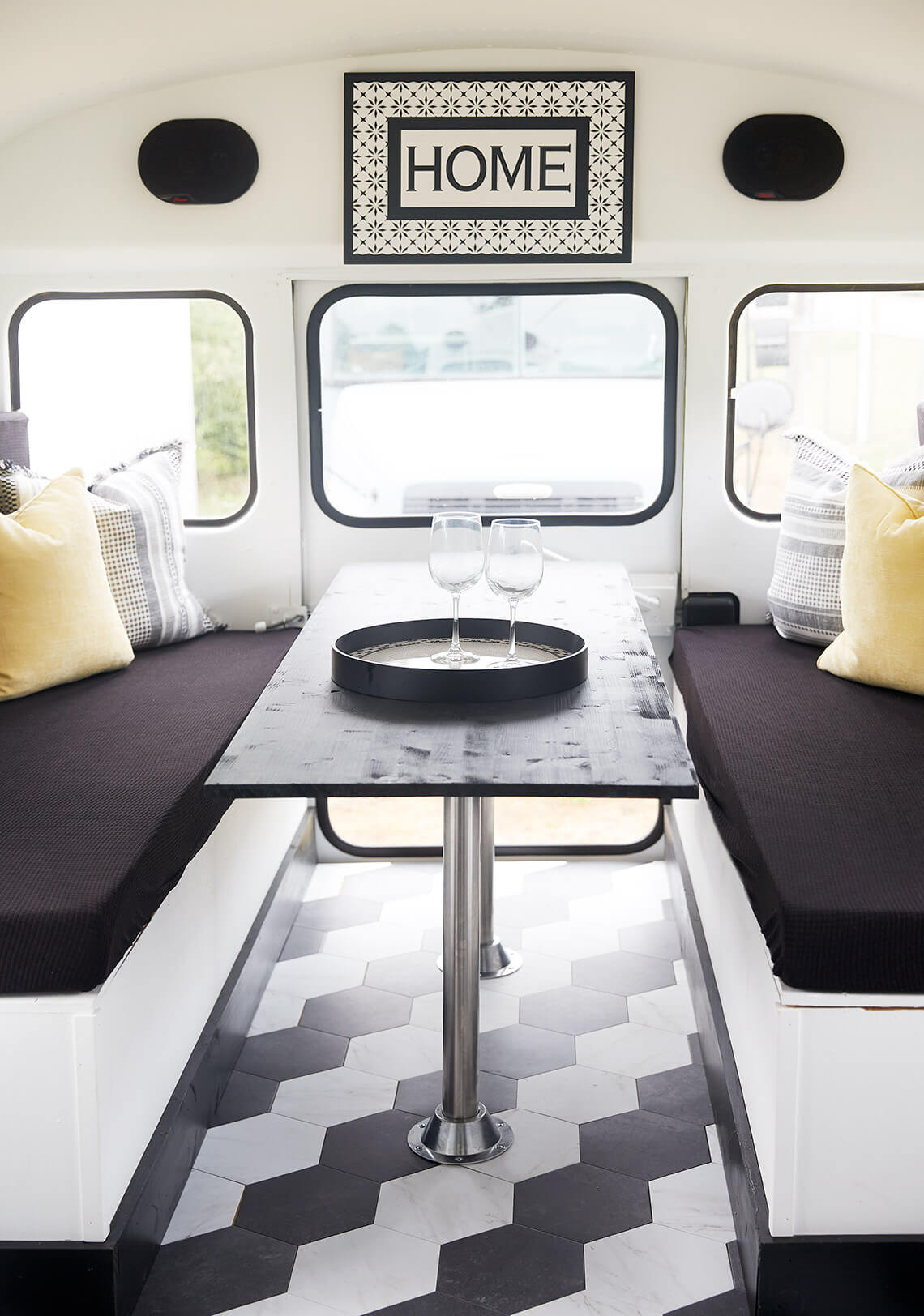 Julius’s dining area at the back of the bus seats six people by day and transforms into a king-size bed by night. photograph by Stacey Van Berkel

When Megan, who was a freshman in college at the time, had the idea to turn school buses into homes, she thought she’d invented the concept — until she was ready to post her first renovated bus for sale and discovered an online community with tens of thousands of members devoted to the skoolie lifestyle. “They’re free spirits — genuine people who want more from life,” Megan says of the skoolie community. “They want to give their kids more opportunities — to travel, to learn from nature.”

Making the most of life was something that Michael valued. Now, Megan lives life to the fullest for both of them. “I live for two, love for two,” she says. “Anything I can do, I think, ‘Why not?’” Like the time she and Lisa went skydiving — because Michael had always wanted to. Even immediately after Michael’s passing, Megan, who had considered her brother to be her best friend, didn’t spend one day in bed because she knew that life was too short not to live it.

Before she found Marcus, Megan scoured the Internet looking for a used bus for sale, but with no luck. So she and her dad took a drive, winding along the back roads of Randolph County on a sweltering July morning, scanning front yards and church parking lots, looking for old school buses. When they found three parked outside a church in Randleman, they pulled off the road and knocked on the door. After Megan explained the Live Simply mission and prayed with the staff, the church offered to sell her one of their buses — in full working condition — for only $600. Megan thought they must have forgotten a zero, but the church secretary assured her that it was no mistake. “God wants you to have this bus,” she told Megan.

Over the next two months, Megan, Lisa, and a family friend ripped out the bench seats, painted the interior and exterior, and installed flooring, cabinets, furniture, and a bathroom. The bus was transformed from yellow outside and lime green inside to black and white throughout.

What started as a small mother-daughter operation has now evolved to include a team of contractors. Plumbers install a sink, bathroom features, and a seven-gallon water tank. An electrician installs outlets and a breaker box. Carpenters build the furniture and cabinets. A family of mechanics changes the battery, replaces the spark plugs, checks the tires, and replaces the belts. 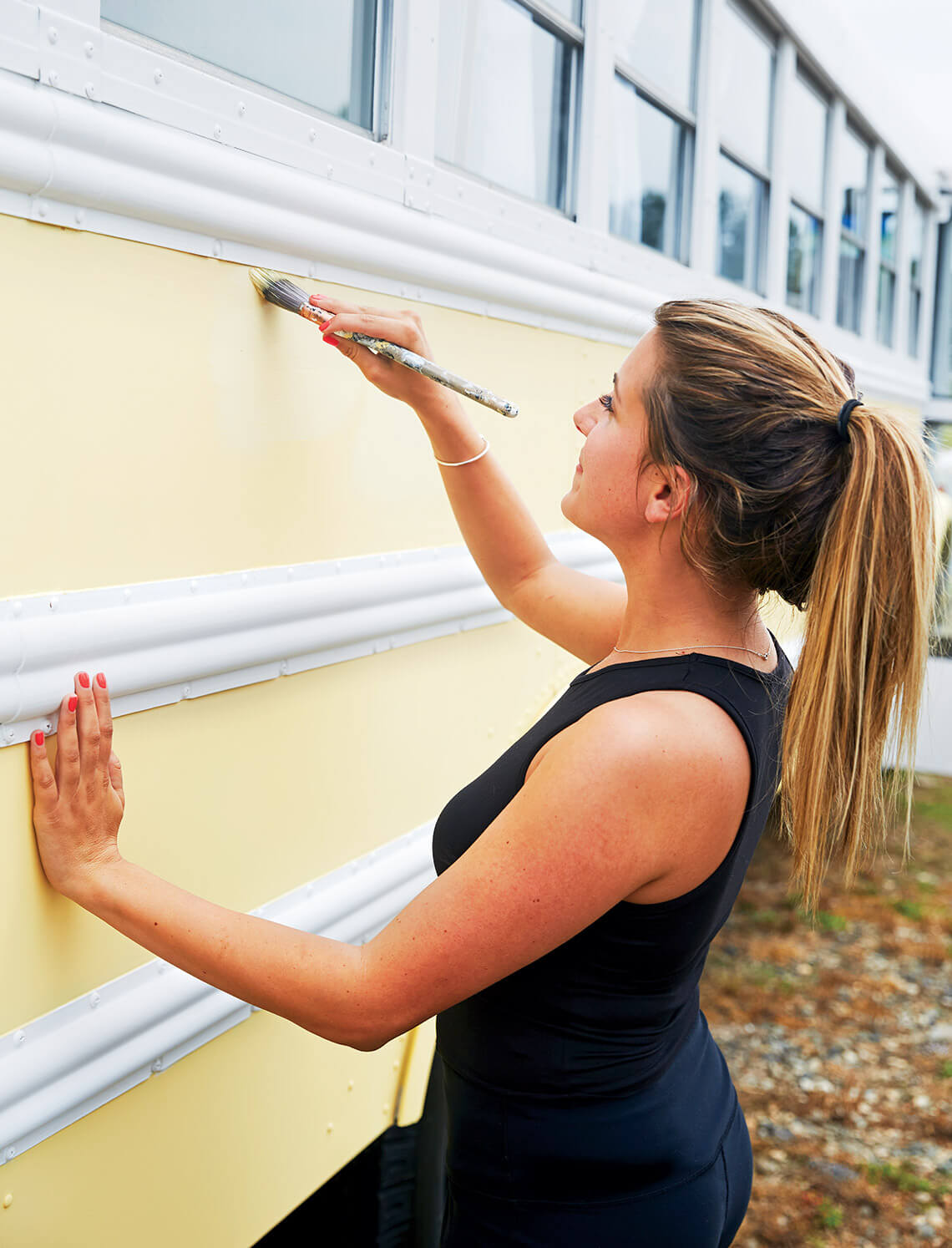 All of the Live Simply buses are handpainted with either a brush or a roller. “It gives it a more personal touch,” Megan says. photograph by Stacey Van Berkel

Lisa takes on the tasks that require time and patience, like painting the buses’ many windows or spending hours, even days, cleaning just the driver’s seat. Megan prefers the jobs that offer instant gratification, like painting the sides and hood and wiping down the tires and rims until they glisten. It’s a division of labor that works; they love what they do. Making ugly spaces beautiful is their passion, and they feel “euphoric” about honoring Michael in this way. “We’re addicted to it,” Megan says. “As soon as it’s light out, I can’t wait to get to work.”

The most challenging aspect of the process is the North Carolina weather. For Marcus, Megan and Lisa started work at 5 a.m. each day to avoid the blistering summer heat. They can’t paint the outside when it’s raining or during spring pollen season. Rain presents another problem, too: The team has learned to caulk every rivet, based on the adage that if something can leak, it will.

Megan and Lisa try to learn to operate at least one new tool for every bus they renovate. They often learn from the people around them — an employee at the junkyard where they bought their first bus taught them how to use an angle grinder to remove stubborn rusty bolts when taking out the bench seats. “We couldn’t do it without all the people that we’ve met along the way,” Lisa says. Their next goal is to learn how to install a tongue-and-groove ceiling — carefully, to avoid putting unwanted holes in the roof of the bus.

Perhaps most important, though, they have learned how to work together and communicate. “It’s the best working with your family,” Megan says, “because we tell each other straight how it is, and then we hug and we keep painting.”

When Marcus was ready for sale, at least a dozen people came to look at the bus. One person offered well over the asking price, but Megan and Lisa never pick the buyer based on the highest bid. “We wouldn’t sell it to someone we didn’t love, because they’re traveling across the United States representing my brother, our name, our work,” Megan says.

She and her mom want the buses to do some kind of good in their new lives. “We just want to make people happy,” Lisa says. Buster, their “moving theater,” was purchased by a four-time cancer survivor who will take the bus to Massachusetts General Hospital and Boston Children’s Hospital so that children with cancer can watch movies while receiving chemotherapy treatments. Buster was decorated with Batman and Wonder Woman movie posters and outfitted with a 65-inch TV, a soundbar and subwoofer, tiered seating, and a working popcorn machine.

Often, the good that is done involves families spending more time together. Tobius, a recent renovation with a robin’s egg blue color palette, will go to a family of five. The parents plan to homeschool their three kids while traveling to national parks around the country, recording videos that they’ll share with their children when they grow up. 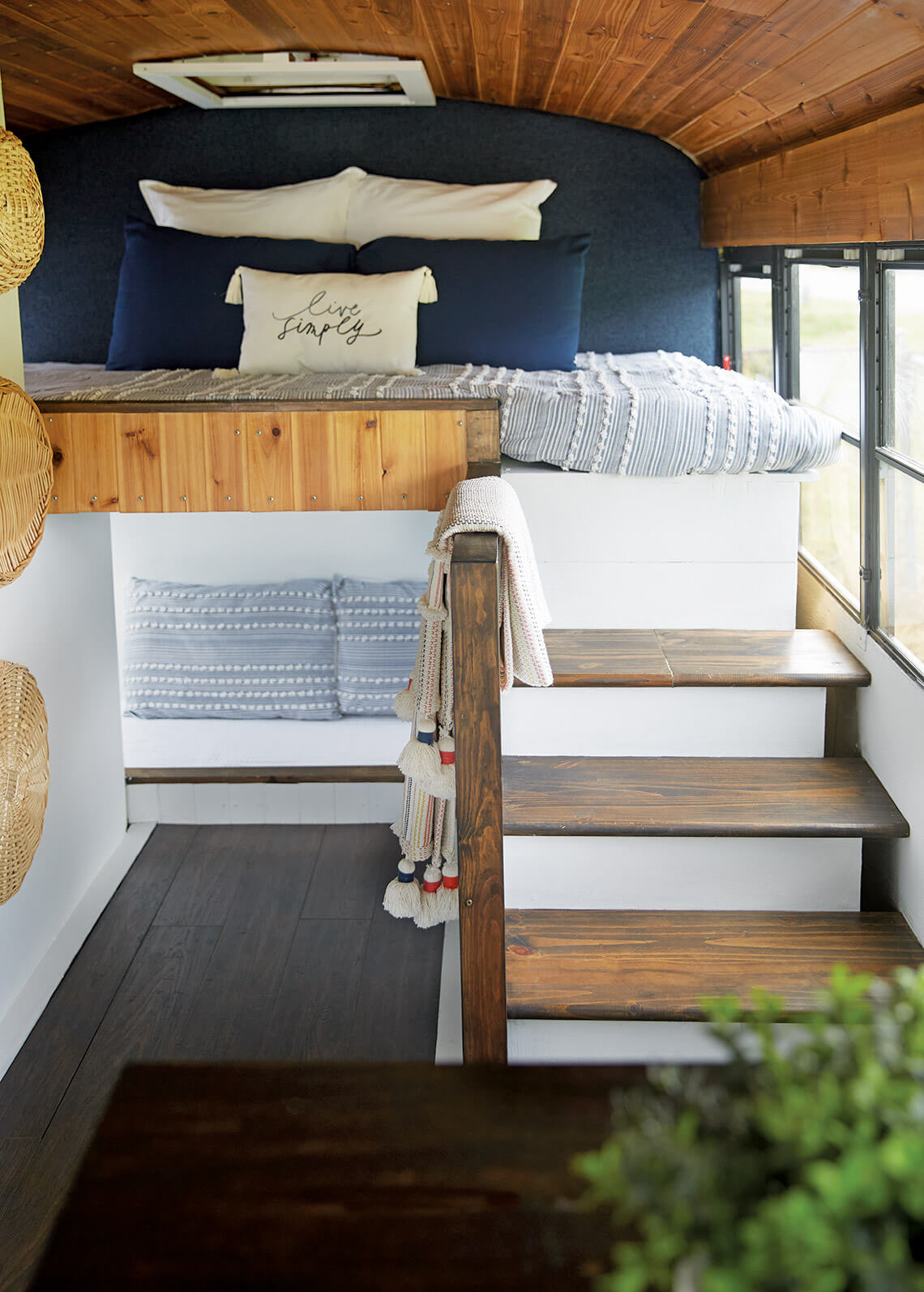 Tobius’s lofted bed is the perfect place to rest after a busy day of work — or adventure. photograph by Stacey Van Berkel

“To give people the opportunity to travel like that, show their kids the country — it’s fun to be a part of it,” Megan says. “If we could promote anything, it would be to spend time with people you love, because it can be taken away. I lost my best friend. Everyone else shouldn’t waste that opportunity.”

Doing good with Live Simply is something that would have resonated with Michael, who chose to be an organ donor. “He’s a part of 22 people’s lives right now,” Lisa says — including her cousin, who was on dialysis and turned out to be a match for Michael’s kidney. After being sick his whole life, he can finally attend his daughter’s soccer games and travel the world. “He’s got a new life,” Lisa says. “Michael would be beside himself.”

Michael gets to travel, too, in a way. “I always say that my brother gets to go everywhere the buses go,” Megan says. Marcus, along with Michael in spirit, is bound for Alaska with its new owner, Laura, whom Megan and Lisa instantly felt was the perfect fit. Laura wants to travel the country with Marcus, her nephews, and her rescue dog, Bo, letting her nephews pick the route. She — like Megan, Lisa, and Michael — prefers to take the road less traveled.